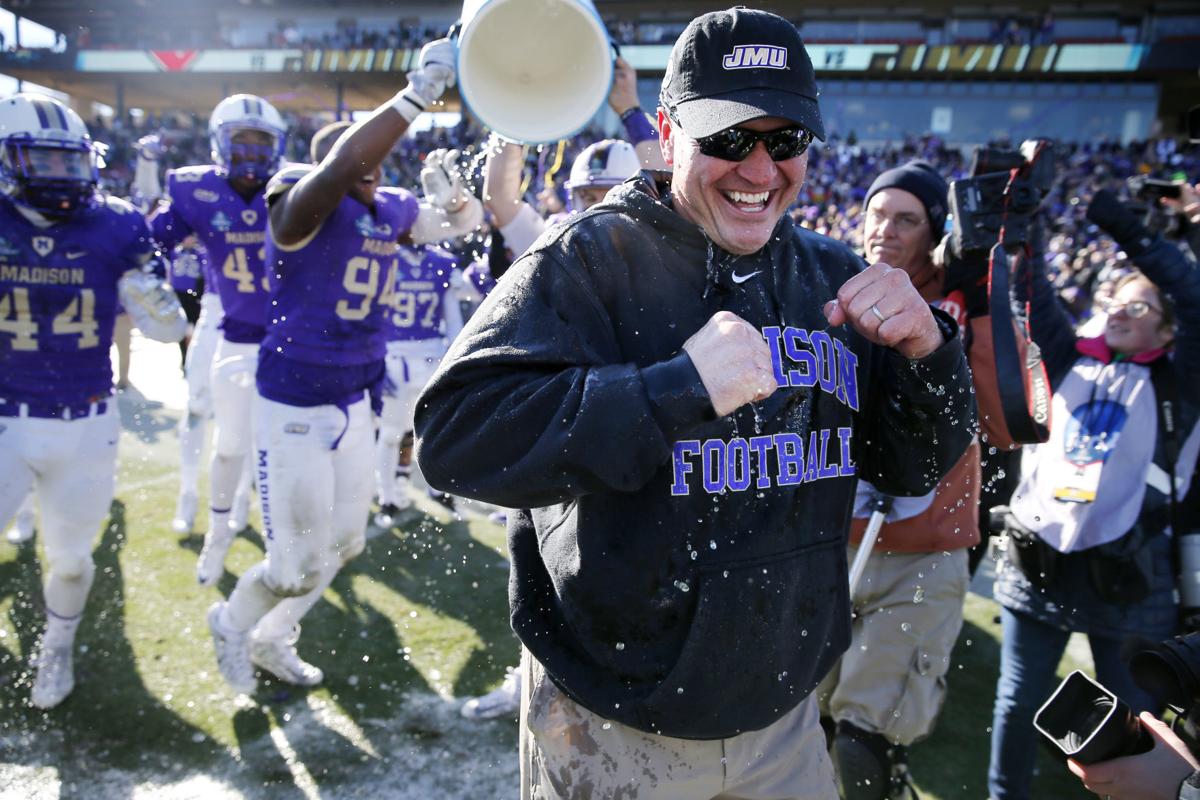 Former James Madison coach Mike Houston smiles after being dunked with Gatorade by his players following the Dukes' 28-14 win over Youngstown State in the FCS national championship game on Jan. 7, 2017. 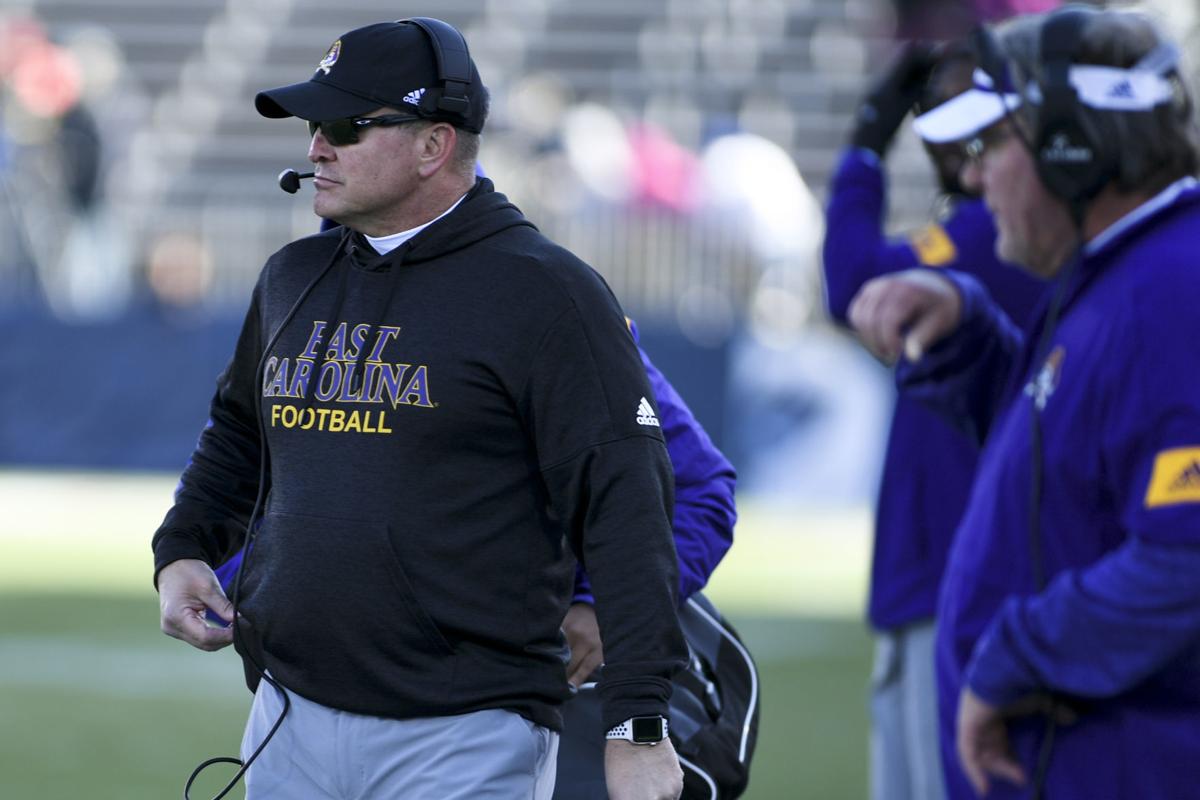 East Carolina coach Mike Houston walks the sideline during the Pirates’ 31-24 win over Connecticut in November at Rentschler Field in East Hartford, Conn.

Former James Madison coach Mike Houston smiles after being dunked with Gatorade by his players following the Dukes' 28-14 win over Youngstown State in the FCS national championship game on Jan. 7, 2017.

East Carolina coach Mike Houston walks the sideline during the Pirates’ 31-24 win over Connecticut in November at Rentschler Field in East Hartford, Conn.

He’s two years and another job removed from those waning moments.

The ones that left James Madison just shy of a perfect campaign and of winning it all in back-to-back years when the Dukes fell 17-13 to North Dakota State in the 2017 FCS national championship game on Jan. 6, 2018.

“That game is one that will always make you feel like you let one get away there with the way it ended,” former James Madison coach Mike Houston, who completed his first season in the same role with East Carolina in November, said earlier this week.

Houston guided JMU to the second national title in its history in 2016, back to the championship game the following year and finished his three seasons at the helm of the program with a 37-6 mark to go along with two outright Colonial Athletic Association crowns.

“You had the ball inside in the [20] in the closing minutes,” Houston said, “and couldn’t get the touchdown to win it.”

In the bout 24 months ago, the Dukes fell behind 17-3 before kicker Ethan Ratke’s field goal three seconds prior to halftime cut into the deficit and before former running back Marcus Marshall’s 1-yard touchdown run in the third quarter brought JMU to within one score.

And when punter Harry O’Kelly successfully executed a fake on fourth down to extend the final drive and push the offense inside North Dakota State territory, it felt as if the Dukes were destined for an improbable comeback victory on the subdivision’s grandest setting.

But the drive stalled and the hopes of Houston and company were gashed when former quarterback Bryan Schor’s last heave toward the end zone fell incomplete.

So, yeah, Houston said he is thrilled JMU gets another crack at the Bison on Jan. 11 in this season’s FCS championship game and that many of the players he formerly coached or recruited into the program have another chance to take the trophy.

He said he watched parts of the Dukes’ quarterfinal win over Northern Iowa and semifinal victory over Weber State last month.

“Certainly I think the group that was there in ‘17 and are still on the roster,” Houston said, “they’re probably going to be more motivated than the rest just because of the heartbreaking loss in ‘17.

When Houston departed Harrisonburg for Greenville, N.C., and first-year JMU coach Curt Cignetti transitioned from Elon to the job he now holds, Cignetti and his predecessor spoke often, according to Houston.

Houston said it was then he told Cignetti that the 2019 Dukes would have a shot to return to Frisco, Texas, for championship game.

“I said, ‘Curt, the roster is set,’” Houston recalled. “‘You’ve got a roster that’s as talented as anybody’s in the country and you’ll have a chance next year to make a run at the national championship if you stay healthy and things go your way.’”

Houston said those conversations took place as Cignetti pursued the JMU gig and even once Cignetti landed it.

Cignetti and Houston coached against each other in the CAA.

“The ones before are, ‘What do you think of [the job]? What do you think of the potential there?’” Houston said. “And of course, I think it’s the best FCS job in the country. I really do, with the resources and talent in the surrounding areas and your ability to recruit at a high level. Then afterward, a lot of the talks were about infrastructure and he asked me about a few, specific kids and what I thought about them.

“Of course, he’s made his own judgments since then, but they were all talks where he was trying to put together his plan, his approach to everything and certainly us having a relationship prior to that allowed us to have conversations where hopefully I was able to help a little bit and make the transition a little bit easier for him.”

The meeting between JMU and North Dakota State will be the third for the two schools in the last four years.

“I don’t know how many people thought that we had the opportunity or ability to go in there and do that,” Houston said. “But I think that game probably was the national championship game, to be honest with you.”

“I’ll never forget that day,” Houston said. “I’ve still got the photo hanging in my office of [wife] Amanda and the boys up there on stage with me, and it’s a really overwhelming moment when you win one, and I hope that they have the opportunity.”

Houston said his tasks at East Carolina are different than the ones he had at JMU, considering he’s rebuilding the Pirates’ program.

ECU finished 4-8 in 2019, but dropped tight decisions to nationally ranked Cincinnati and SMU along the way.

“That’s kind of a look of what we have,” Houston said. “We’ve got some really talented young players who have a lot of potential, but when I took the job I knew what it was. It’s a complete rebuild.

“It’s not going to happen in one year, but we just signed a recruiting class that we thought was pretty good and is ranked second in the conference and top 60 in all of FBS. So certainly, we think it’s a talented class to add to players we have on the roster and it’s a good place. It’s not going to be down very long. It’s just got too much good to it.”

He said he keeps in contact with his former players, especially the veterans who he built long-lasting relationships with over his three years with the Dukes.

He added even though he has his own games to coach, each Saturday he makes time to check the result of the JMU game.

Houston said he’s happy quarterback Ben DiNucci played so well this season, having thrown for 3,237 yards and 27 touchdowns to go along with 560 rushing yards and seven scores on the ground while earning CAA Offensive Player of the Year honors. Houston’s staff recruited DiNucci after the signal-caller left Pittsburgh following the 2017 season.

“He took a lot of criticism last year, fair or not is debatable,” Houston said. “But you saw the potential that he had the whole time and really just to see the way he’s played within himself this year and cut down on mistakes to really play at a high, high level, I’m just happy for him as a person. There’s not a better kid on that roster and so it’s been good to see for all those guys.”

Houston said he’s traveling to Nashville for the American Football Coaches Association annual convention on the day of the FCS championship game, but hopes to get to a television as soon as he lands in order watch and root on his former players.

“I’m proud of them,” Houston said. “A lot of those guys were with us when we beat North Dakota State in the FargoDome, so they’ve been through a couple of these games and so the game won’t be too big for ‘em. I think they’ll be able to handle the stage and I think that’s always important.”