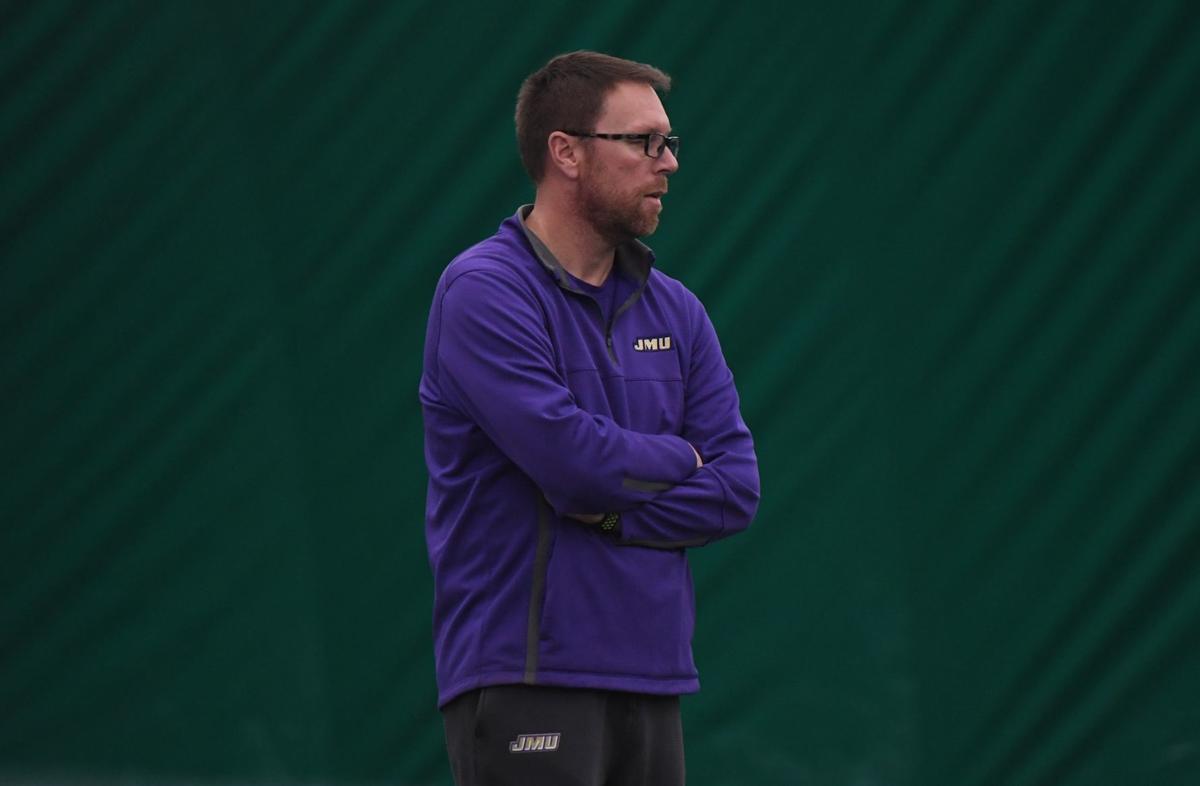 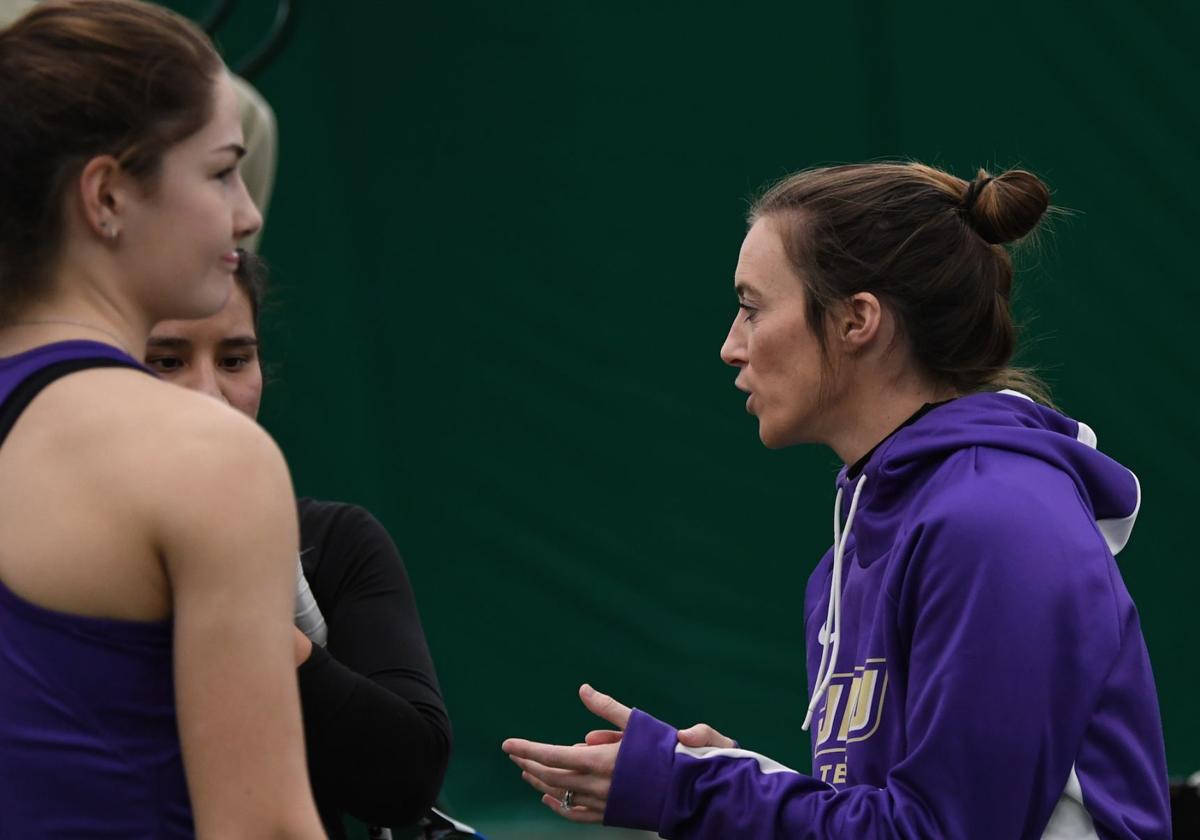 The rising temperatures and sunny skies sitting above the seemingly endless number of playing courts made the USTA National Campus a paradise for James Madison men’s tennis.

“It’s kind of like our Disney World,” longtime Dukes coach Steve Secord said with a laugh of the Orlando, Fla., facility about 30 miles east of Magic Kingdom.

But it was there that Secord and his squad’s version of the Happiest Place on Earth realized their season would likely come to an abrupt end.

JMU was in the midst of its second match at the USTA National Campus, one the Dukes went on to capture 4-0 from Appalachian State on March 12, when the COVID-19 pandemic began bringing college athletics nationwide to a halt.

“We started our first match and I was exchanging texts with the coach of the team that we were [scheduled to be] playing later that evening, and he was like ‘Are you still here? We’re still here,’” Secord recalled.

But that didn’t last for long.

Conference basketball tournaments were scrapped one after the other, including the Colonial Athletic Association women’s event, which Secord said he thought the CAA would try to push through before postponing or canceling anything else.

“And then it was a barrage of different alerts, texts, and that stuff,” Secord said. “We finished our match, we let the guys get showered and we hadn’t heard yet that everything was really canceled. But Shelley [Jaudon], the women’s coach, who was down in Tampa said they weren’t going to be playing their match on Saturday and that they were heading home.”

For Jaudon and the Dukes’ women’s tennis team, a similar scenario unfolded.

JMU took down host South Florida 5-2 in Tampa to finish the campaign a proud 10-4 on the same day its previously scheduled match at Florida Gulf Coast for March 14 was canceled.

From there, the concerns of Jaudon and Secord were the same. They were dealing with identical issues, answering questions from their players about what would happen next in regard to their seasons and most importantly getting their teams home to Harrisonburg in the immediate aftermath while also traveling through a world coping with coronavirus concerns.

“That’s the mom in me that took over,” said Jaudon, who organized a chartered bus for both teams to take home.

The route originated in Tampa early on a Friday morning with the women’s team, swung past Orlando to pick up the men’s team and eventually made the long trek north to JMU.

The men’s team was previously supposed to fly from Orlando through Chicago-O'Hare to Shenandoah Valley Regional Airport. Jaudon’s bunch had large passenger vans to navigate through the Tampa area, but with luggage and a 15-to-18 hour return trip to Harrisonburg, those vehicles wouldn’t have been ideal to return home in.

“Once you think you’ve seen it all, you haven’t,” Jaudon said. “[The chartered bus] was probably the safest option to get home. Was it ideal with the time of travel? Probably not, but it gave our players some more time together and to process, and for us to be with them through that time that day as it continued to unfold. It helped us answer questions and lead them better. A little more time together paid off.”

Jaudon said she knew the fate of her season during her team’s victory against the Bulls, one the second-year coach called a great win for her program.

“The decision was made from the conference office during that match actually,” she said. “And I don’t typically look at my watch, which is connected to my phone, but it was obvious that something was going on because my watch was just blowing up. I glanced down and knew what had gone on. I’m thankful that I was first to find out because it gave me a chance to talk to my team before they got to their phones and found out.”

The JMU men had four seniors on its 2020 roster, and Secord said they were understandably emotional when discussing the end of the season and the potential end of their careers.

Secord said he knows his upperclassmen were always good students and that some of them probably already have job offers waiting.

“It was weird,” Secord said. “When we were working everything out, I headed to let the hotel people know that we were leaving a day early and the guys were all congregated by a pool in between, and you could see it was setting in.

“Then we talked there for a while about the what ifs and you could see visibly that they were emotional about the end. That was tough. For the seniors, and the young guys that looked up and learned a lot from them, it was just a bizarre ending to everything. There were maybe people holding out hope that this would go quick, maybe it’ll be a temporary thing, but it was not.”

On the women’s side, the team was made up of seven sophomores and one senior, which gives Jaudon reason to be excited about the future of her program. But she said she was more impressed to see how her sophomores rallied around senior Jona Roka before they left the Sunshine State.

The cancellation of the campaign brought an impromptu senior night at a bartaco restaurant in Tampa and put on hold all the questions and concerns they may have had for at least one meal.

“The foundation of our culture is family,” Jaudon said, “and it was very neat during the time of adversity to truly see that shine through because we see it on the court, in practice, and in daily living, but to see the family culture come through then was great.

“… The players wrote the script that would usually be read at the senior day presentation and so they took turns reading different parts of it and sharing different memories of her.”

Upon returning to The Valley, Jaudon and Secord faced more coronavirus-related issues that their players encountered.

The men’s team has four international athletes from four different countries – Australia, Costa Rica, Spain and Sweden – and so do the women, with players hailing from Canada, Greece, Russia, and Venezuela. Both coaches wanted to make sure those players could get home if they wanted to, even if it meant hustling against the clock to beat any border restrictions set in place by any of those nations or the United States.

“The initial thing was that JMU wasn’t sure we would be able to come back to campus,” Jaudon said. “So we were in a little bit of a holding pattern which was tough on the international girls because they didn’t have anywhere to go necessarily. But with the family culture, they were invited home with some of our American players to hang out there until JMU made the decision to finish the semester online. Then that’s when they started to make plans to get home.”

Secord said Costa Rica native Gonzalo Adis, a junior, returned to his home country and so did junior Alvaro Arce from Spain, but that both are under 14-day quarantines there since they traveled from America.

Secord added: “I was getting nervous that we’d have a shutdown and they’d not be able to get out of the country or their country wouldn’t take them.” 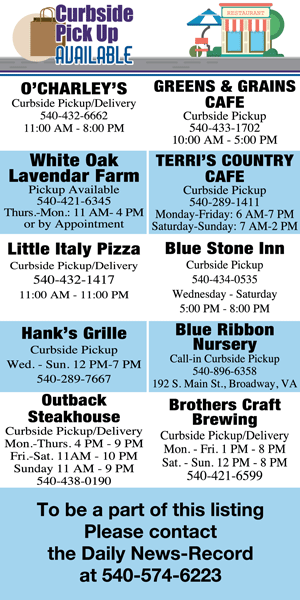