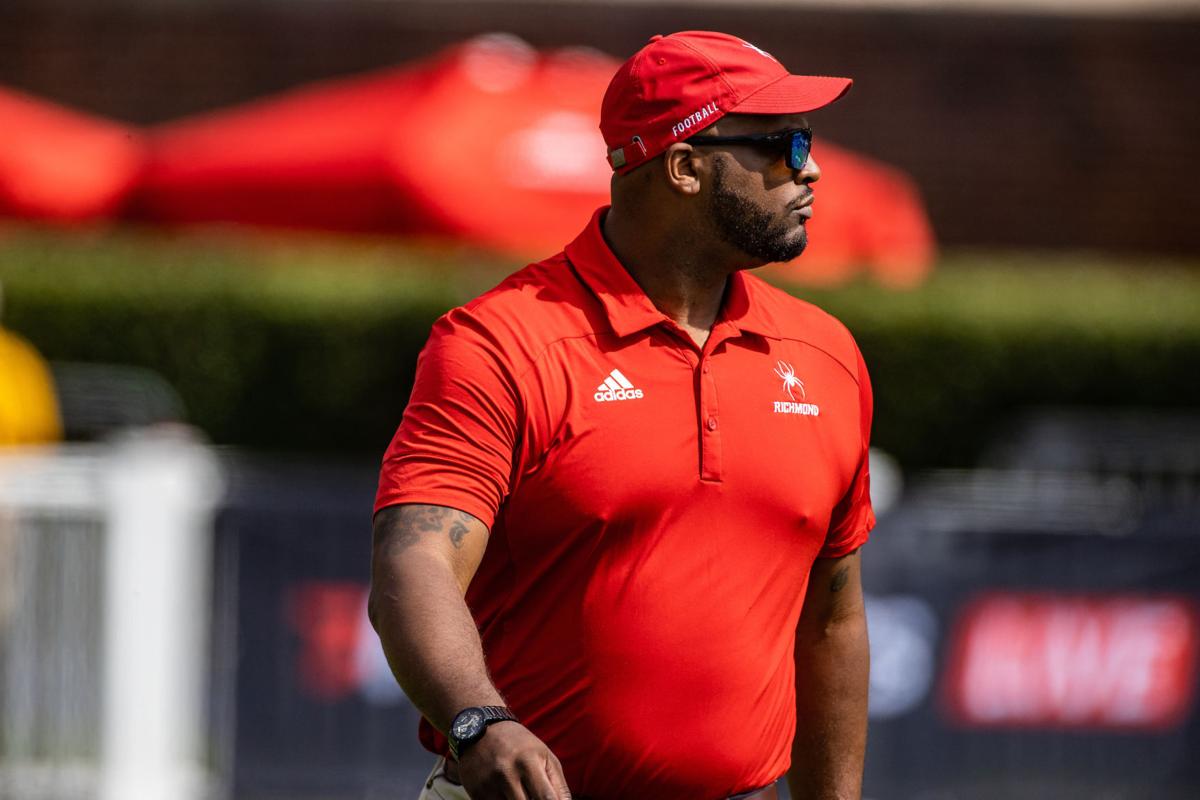 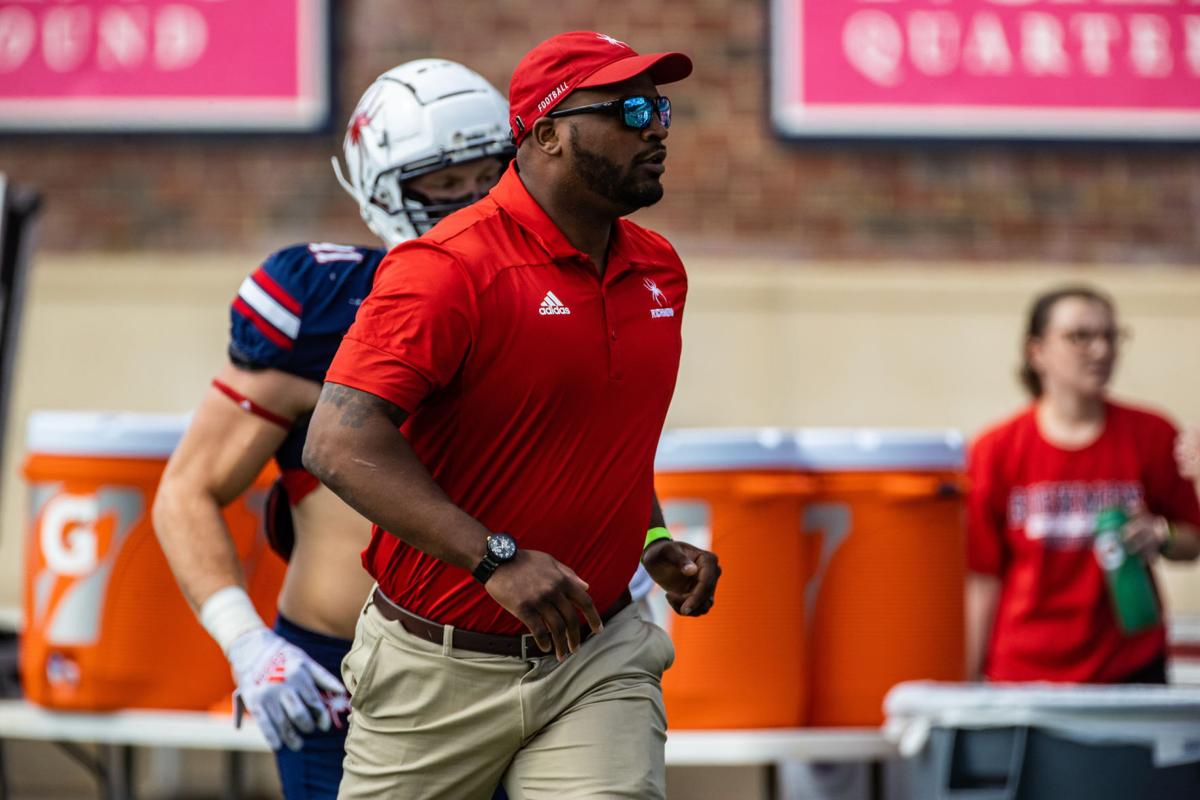 Richmond defensive tackles coach Sam Daniels jogs onto the field before a game against Elon earlier this month in Richmond.

Richmond defensive tackles coach Sam Daniels jogs onto the field before a game against Elon earlier this month in Richmond.

Thirteen years later, there’s still a touch of surprise in his voice when he recalls how it happened.

“We were like, ‘There’s no way they’re going to punt the ball to Scotty McGee,’” Sam Daniels said, “and he runs it all the way back down and we end up winning the game and winning the conference, so I don’t think there was a bigger moment in this series or rivalry than that.”

Daniels, then, was a blossoming defensive tackle for James Madison, in the midst of back-to-back exceptional seasons.

As a junior in 2008 – the year McGee’s game-winning punt return for a touchdown as time expired at heated rival Richmond sparked JMU all the way to the national semifinals – Daniels was one of six captains for the Dukes and earned honorable mention All-American honors from the Sporting News and third-team All-Colonial Athletic Association accolades for his 42 tackles, 12 tackles for loss and six sacks.

And that memorable afternoon in the capital city, he tallied four tackles and half a tackle for loss against the Spiders.

Another clash between JMU and Richmond is scheduled for this Saturday at Robins Stadium in Richmond, and now Daniels is on the other side of the rivalry. He’s in his second season serving as the Spiders’ defensive tackles coach.

“I wouldn’t say it’s necessarily strange,” Daniels said about coaching against his alma mater, “because all week you prepare and you are in the moment not just when the game starts, but all week. I would say more at the beginning of the game, coming out you feel a little weird in the beginning, but you don’t really think about it because you’ve been locked in with your guys not just competing for this, but all season up until this point.”

He said he’s enjoying his time as a member of UR coach Russ Huesman’s staff. Fellow Richmond assistants like offensive coordinator Jeff Durden was in the same role at JMU when Daniels played for the Dukes, and Spiders defensive coordinator Justin Wood impacted Daniels when he was just beginning his path in the college coaching profession.

“I’ve known Sam since he played for us,” Durden said, “and he’s our juice guy. He brings a lot of energy to our football team and he’s real positive, a great recruiter. He’s learned from good coaches and he’s still doing a great job here.”

After his playing days were over, Daniels said, he originally planned to take a year away from the sport, but he missed football too much, so he volunteered as an assistant at his old high school – Woodrow Wilson High in Portsmouth – before an opportunity at The Apprentice School in Newport News opened up.

It was there while trying to find other programs to clinic with, he said, he met Wood, then an assistant at nearby Christopher Newport University.

“Probably reached out to 25 schools in the area and no one responded to us at all,” Daniels said, “and the one coach to actually pick the phone up to say, ‘Hey, you guys come over,’ was Justin Wood. … And the crazy story is 11, 12 years later now, Justin Wood is the defensive coordinator here and I’m working with him here, so I always thank Justin for that.”

Daniels has lived a nomadic life since, spending two seasons as the defensive line coach at Frostburg State (Md.) after his two years at The Apprentice School. He’s also had stints at Howard, Shepherd University (W.Va.) and Bridgewater College, where he coached the D-Line for former longtime Eagles coach Michael Clark in 2019 ahead of landing the job at Richmond.

Daniels said he and his wife have gotten used to moving to wherever his next job would take them.

At Richmond, though, Daniels has fit the staff well. He said he gets along great with defensive ends coach Jeff Hanson, a former JMU assistant under Mike Houston who won a national championship with the Dukes in 2016.

Daniels said he took a few trips this offseason to clinic with Hanson and appreciated all the conversations they had in the car discussing the game and profession, which he believes has helped him become a better coach.

Most importantly, Daniels is making a quick impact on his players. He coached Richmond defensive tackle Kobie Turner to CAA co-Defensive Player of the Year honors this past spring.

“After our old coach left,” Turner said, “I was someone who was worried about who was going to be able to help me take my game to the next level. But [Daniels] is someone that does not glance over the small details and he does a great job of letting us know that, and on top of that, he’s gotten to know our ticks and things with what’s going to get us fired up and ready to go.”

Turner said it’s easy to see how Daniels has climbed up through the coaching ranks and back into the league he once starred in.

Said Richmond senior linebacker Tyler Dressler, who enters Saturday with 43 tackles and five tackles for loss this season: “The one thing I like about [Daniels] most is his positivity. There’s not a day that goes by that he’s not extremely uplifting and he brings the juice, too, and I know the defensive linemen absolutely love that about him. And just being around him, he’s a really intelligent coach. We like to watch film with the defensive line and he’ll come in and being around him, you learn more about the game.”

Daniels said his style of coaching is really built on teaching. He’ll occasionally yell, but most of the time he wants his players to understand why they’re being asked to do something on a particular play, snap or within a drill.

He said he always tries to be honest with his players, too, which is something he attributes to the coaches who recruited him to JMU. Former Dukes coach Mickey Matthews, former offensive line coach Curt Newsome and former defensive line coach J.C. Price all influenced Daniels, he noted, in the way he thinks about coaching. Newsome is now the head coach at Emory & Henry and Price is the co-defensive line coach at Virginia Tech.

“I saw Coach Newsome and I saw how happy he was,” Daniels said, “and I wanted to be like Coach Newsome because he was really positive but at the same time, he’d get on you and he was honest with you.

“Like when I was being recruited, I really liked that side of it because he was being honest with me. A lot of people were telling me I was going to play linebacker, but Coach Newsome literally on the first day I met him was like, ‘You’re going to have to put your hand in the dirt, and play defensive line.’ He was the only coach who told me that. All the other coaches were telling me how good I was at linebacker. So, I thought that was kind of funny and J.C. Price was kind of the same way. He was always honest and up front with you and he was motivating you.”

“He’s definitely won over the group and won over me and I think he’s a great coach,” Turner said.

As for Saturday, Daniels’ defensive tackles could play a big role against the Dukes, who haven’t eclipsed the 200-rushing yard mark in a game since Week 1 against Morehead State. Richmond is only giving up 123.6 yards on the ground per game this fall.

Daniels said the Spiders have to prioritize tackling JMU running back Percy Agyei-Obese.

“He’s pretty good,” Daniels said. “And you’ve got to bring your lunch to tackle this kid. So, we’ve got to do a good job of driving our feet on contact, not allowing extra yards with [Dukes running back Latrele Palmer] in the backfield too, because they just do a good job of running their feet on contact and breaking tackles. So that’s number one of what we’ll have to do and we’re going to have to slow down JMU’s running game and that starts with us being good in the middle.”

Kickoff on Saturday is at 2 p.m.