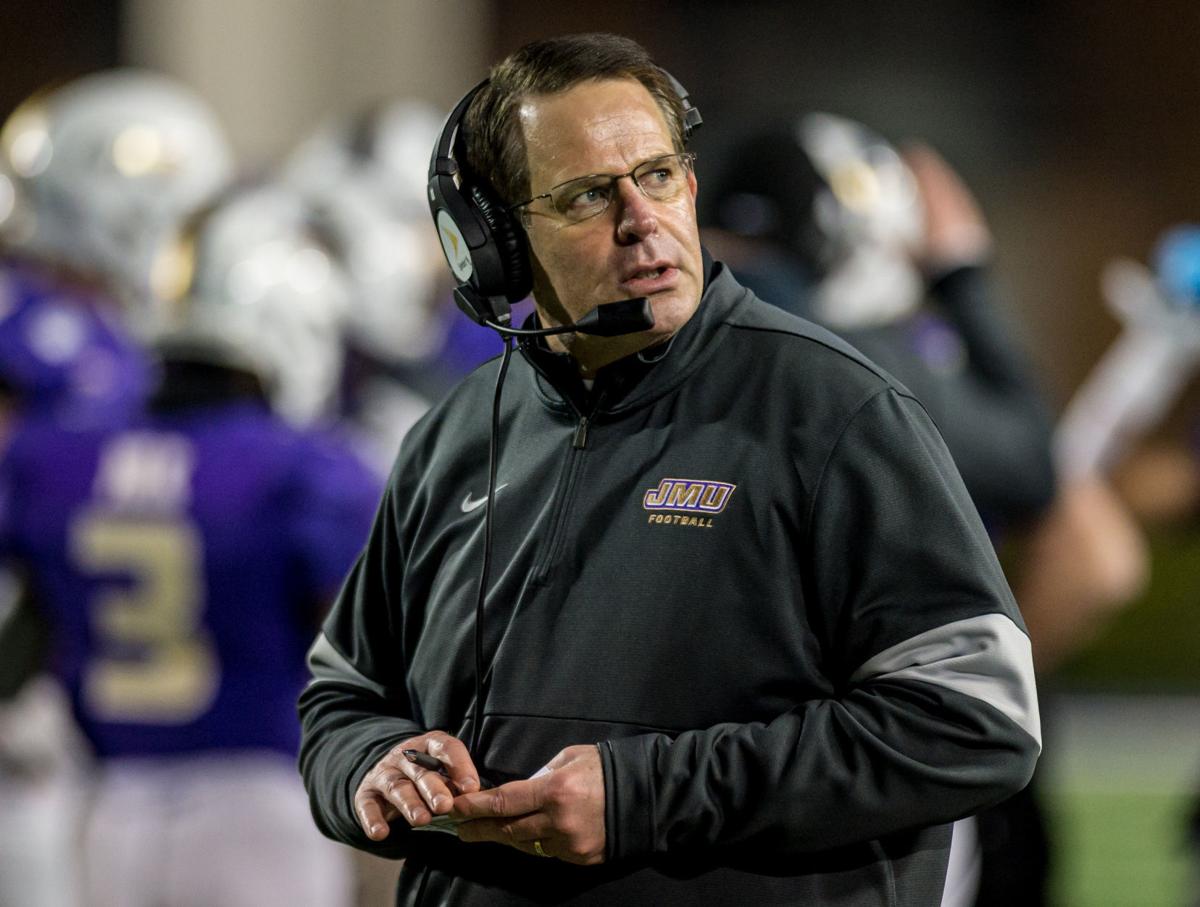 James Madison coach Curt Cignetti looks back at his bench from the field during the Dukes’ win over Weber State in the semifinal of the FCS playoffs last month at Bridgeforth Stadium in Harrisonburg. 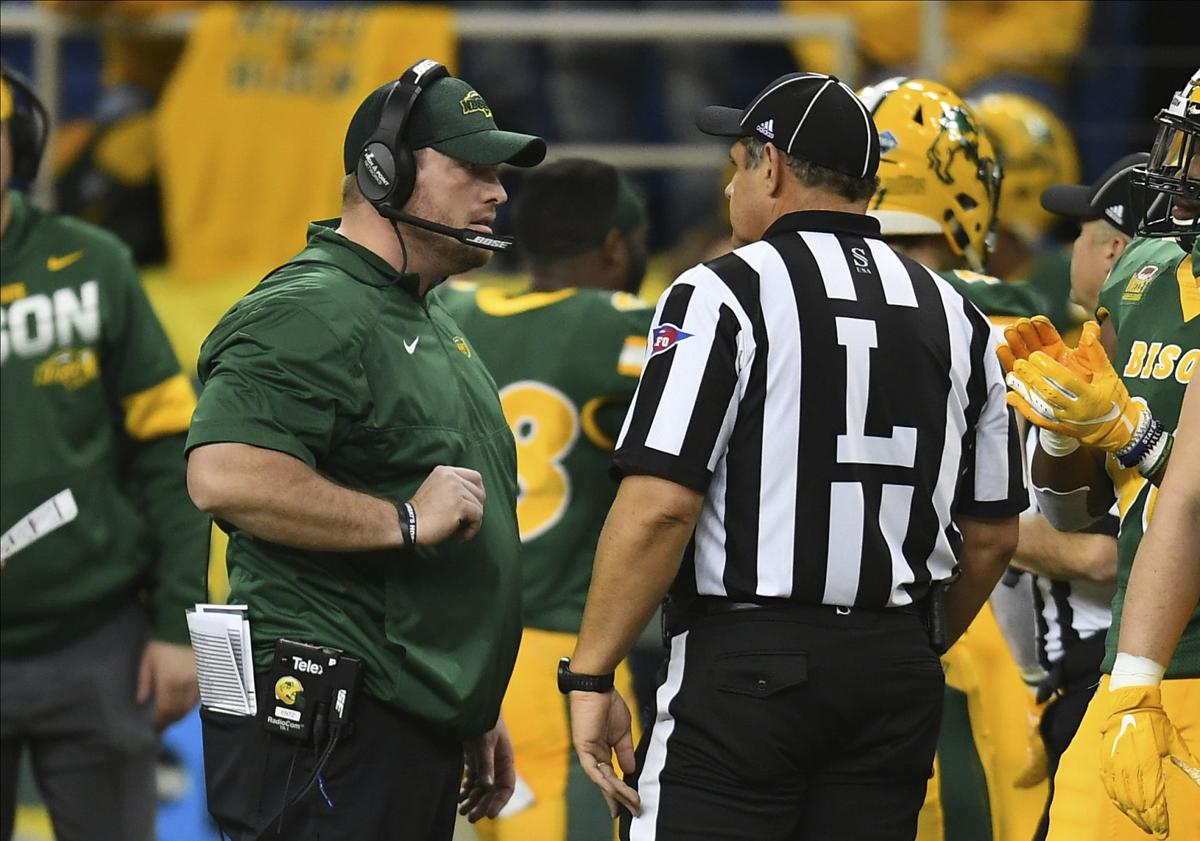 North Dakota State coach coach Matt Entz, left, discusses a call with an official during the Bison’s win over Nicholls State in the second round of the FCS playoffs last month at the FargoDome in Fargo, N.D.

James Madison coach Curt Cignetti looks back at his bench from the field during the Dukes’ win over Weber State in the semifinal of the FCS playoffs last month at Bridgeforth Stadium in Harrisonburg.

North Dakota State coach coach Matt Entz, left, discusses a call with an official during the Bison’s win over Nicholls State in the second round of the FCS playoffs last month at the FargoDome in Fargo, N.D.

Neither first-year coach defined it as the traditional rivalry that college football usually lends itself to.

“You can call it what you want,” Cignetti said Friday during the FCS championship game coaches teleconference. “Is Clemson and Alabama a rivalry?”

While the Tigers and Crimson Tide have met in the College Football Playoff semifinals or championship game four times over four seasons spanning the 2015 campaign through last year, the Dukes and Bison are on a similar trajectory at the FCS level.

When second-seeded JMU (14-1) and top-seeded North Dakota State (15-0) tangle on Jan. 11 at Toyota Stadium in Frisco, Texas, in this season’s FCS title game, it’ll mark the third time in four seasons the two are meeting in the postseason.

“I don’t know what maybe constitutes a rivalry,” Entz said. “We don’t play each other annually, so I guess by that definition, I would say no. But I do think it’s two programs that respect one another and anticipate having to play a really good football game to win. And so that’s what we at least think of when we think of JMU and I hope their coaches and their players think the exact same thing.”

The Dukes topped North Dakota State in the 2016 national semifinals, becoming the only team in history to beat the Bison in an FCS playoff game in the FargoDome. North Dakota State got its revenge in the 2017 championship game when it knocked off JMU 17-13 to win it all and put an end to the 26-game winning streak by the Dukes.

“They’ve been to this game basically every year but one the last eight years,” Cignetti said, “and this is JMU’s third trip in the last four years, so I think in a sense it’s a rivalry even though we don’t play every year. By nature of what’s happened in recent history, it’s become a rivalry in it’s own sense.”

The two coaches marveled at the sustained success each program has maintained, with Cignetti citing the Dukes’ recruiting and infrastructure as reasons why JMU has become one of the premier programs in the subdivision over the last half decade. Entz said high standards at North Dakota State have continued because of its longstanding tradition.

“Both programs are in unique positions to be successful,” Cignetti said. “And when you look at the Division I level, there are not many schools that can say that at the FBS level.

“You look at Alabama, Ohio State, Georgia, there’s very few schools positioned to be successful year and year out, and there’s a lot of reasons for that, but it comes down to administrative support and fan and alumni support and resources. And once you build that tradition, the thing sort of keeps running as long as you keep investing in the program.”

Cignetti said he’s kept an eye on the Bison from afar this year, taking time in September to watch North Dakota State’s win at fellow Colonial Athletic Association member Delaware. JMU and Delaware didn’t play this season because of the CAA’s rotating schedule.

“Offensively, I’ve always kind of liked what they did,” Cignetti said, “but yeah I always peeked in on their scores and how they were doing in the playoffs and hoping that this day might come.”

And on offense, JMU and North Dakota State have seen similar, standout results — averaging 41.3 points per game and 37.9 points per game, respectively, each led by quarterbacks who were named the offensive player of the year in their conferences.

“I don’t want to say they manage games,” Entz said of Lance and DiNucci. “They take over games.”

Kickoff next Saturday is set for noon and will be televised on ABC.

“Have a ton of respect for James Madison’s program,” Entz said. “I’ve been fortunate enough to play ‘em twice as a defensive coordinator here at North Dakota State and know the caliber of kids they have with how hard they play, and [I] know that it’ll be a great contest down in Frisco, Texas, a week from now.”