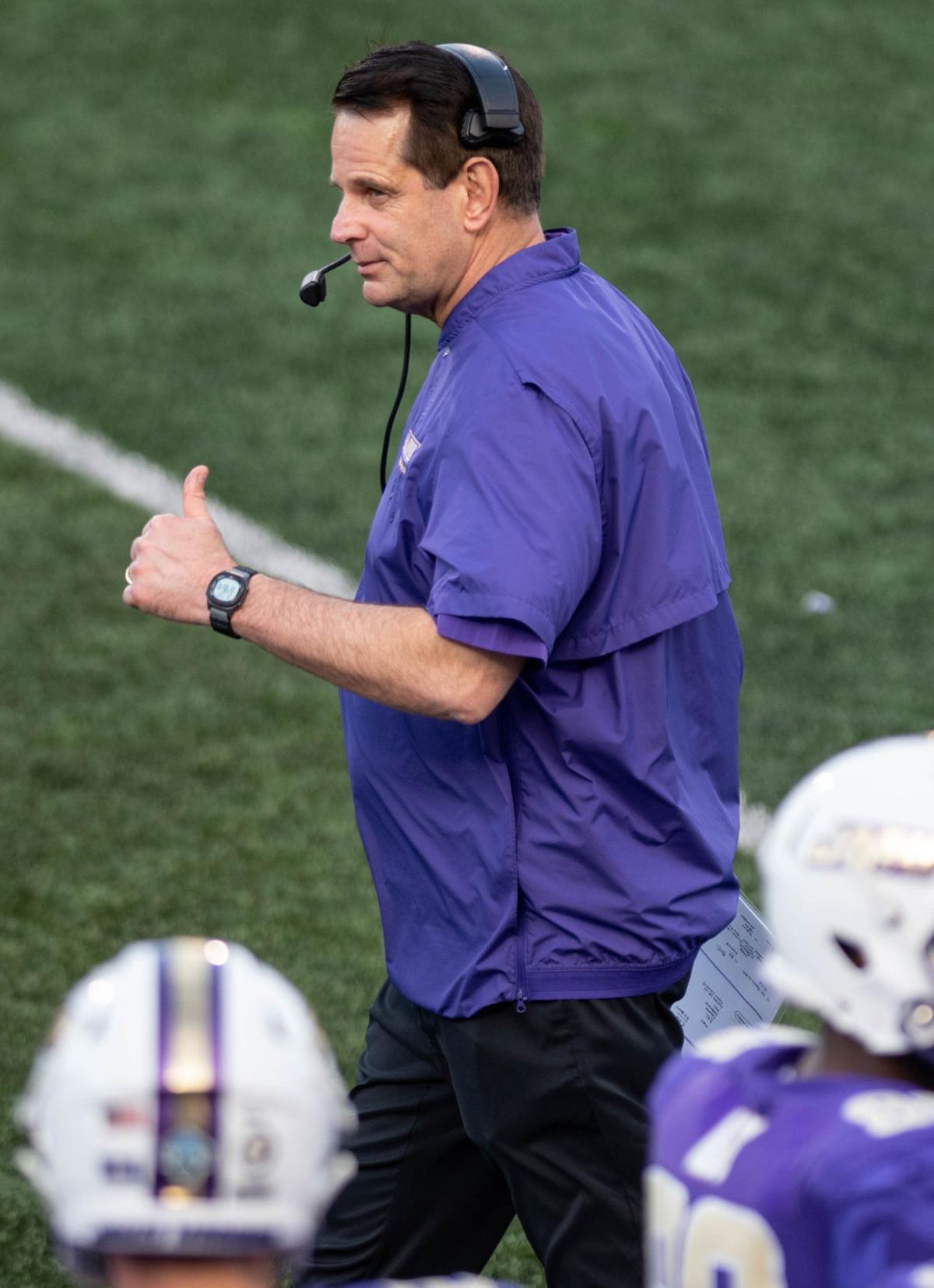 James Madison coach Curt Cignetti gives a thumbs-up during the Dukes’ win over North Dakota on Sunday at Bridgeforth Stadium. 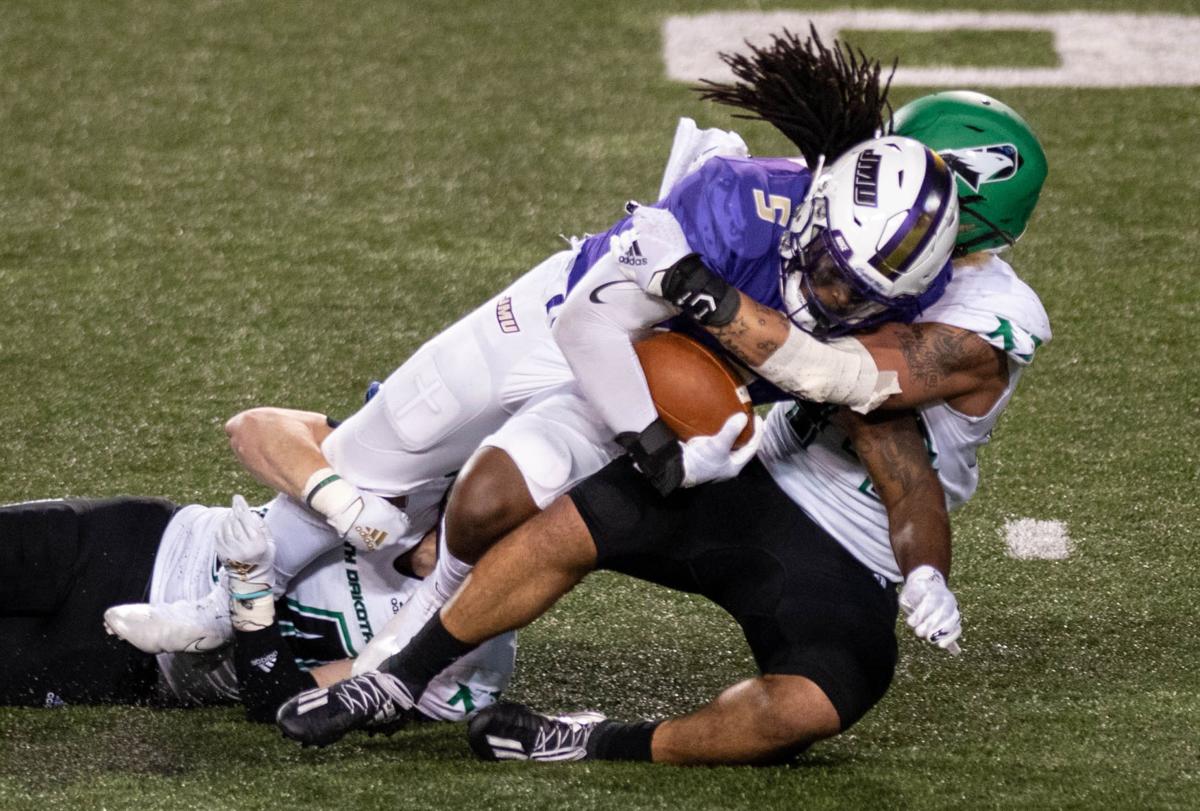 James Madison running back Latrele Palmer (5) lowers his shoulder against North Dakota defensive back Kadon Kauppinen (24) during the Dukes' win on Sunday in Harrisonburg.

James Madison coach Curt Cignetti gives a thumbs-up during the Dukes’ win over North Dakota on Sunday at Bridgeforth Stadium.

James Madison running back Latrele Palmer (5) lowers his shoulder against North Dakota defensive back Kadon Kauppinen (24) during the Dukes' win on Sunday in Harrisonburg.

The variance is likely enough to create headaches and worries for opposing defensive coordinators.

James Madison is evolving on offense and the Dukes are continuing to add plays and formations as they get deeper into their spring campaign, which will continue on Saturday in the semifinals of the FCS playoffs at second-seeded Sam Houston.

“Well, we’ve got a lot of guys who we think are capable of making plays,” JMU coach Curt Cignetti said Tuesday, “and we’re just trying to get ‘em on the field. And then week-to-week, if you can present something that’s a little bit different than what the opponent has been preparing for or what you think they’re preparing for, that gives you some sort of schematic edge.”

Cignetti and Dukes offensive coordinator Shane Montgomery showed off new wrinkles, which have worked to JMU’s benefit, in each of the past four games.

There was the unveiling of a three-tight end set against William & Mary in late March.

Then in the regular-season finale versus Richmond, quarterback Cole Johnson’s 31-yard touchdown run in the fourth quarter to put the game away originated out of a formation and personnel group the Dukes hadn’t displayed before. Johnson took the fourth-down snap under center and was supposed to throw the ball to versatile fullback/H-back/tight end Clayton Cheatham, who was lined up as a fullback on that particular play. But Cheatham was held trying to run into the flat. So, Johnson improvised and the Spiders didn’t have an answer.

More recently, running back Jawon Hamilton’s 99-yard touchdown run – the longest play in FCS postseason history – in the first-round victory over VMI came out of a two-running back grouping with he and Solomon Vanhorse paired on each side of Johnson ahead of the snap.

JMU used Vanhorse and running back Latrele Palmer in a two-back set this past Sunday during its win over North Dakota in the FCS quarterfinals.

“The different looks definitely help us out just with keeping the defense on their toes,” senior running back Percy Agyei-Obese, the Dukes’ leading rusher, said. “They’re used to a one-back set, but the last couple of weeks we’ve thrown in a two-back set and different formations with the receivers, too. So, this keeps ‘em true to their defense and keeps their head running. And since we’re kind of a tempo team, we’ll run out there fast and we’ll be set up and that’ll be something they’re not used to.”

Cignetti said: “At this point in the season, a lot of it is stuff you put in for a particular week, so you’ve got to make sure you get enough reps during practice. … But, we have a lot of meeting time, walkthrough and practice time that by Saturday these guys have it down pretty good.”

Agyei-Obese said the offense practices the sudden changes from one formation to another, which was clear during the 13-play lesson the unit gave on unpredictability to score their first touchdown against North Dakota.

Their first-quarter scoring drive spanned 80 yards and more than seven minutes, and the offense never the showed the same personnel on consecutive plays. Cignetti and Montgomery also maneuvered in and out 10 different skill players – Agyei-Obese, Vanhorse and Palmer in addition to Cheatham and tight ends Drew Painter and Noah Turner as well as receivers Antwane Wells Jr., Kris Thornton, Scott Bracey and Kyndel Dean – throughout the drive.

No formation was repeated on back-to-back plays either.

“And everyone knows their certain formations,” Agyei-Obese said. “People are like, ‘This is what I have. I know I’m in this formation, so I better be listening on the sideline for Coach,’ so everyone is ready for whatever is going on out there.”

The Dukes used a three-tight end set twice and the two-running back set once, which netted Vanhorse an 18-yard run. Cheatham filled all three of his roles on the march down the field. And, perhaps most creatively, Cignetti and Montgomery aligned their receivers uniquely.

Agyei-Obese said that had to throw the defense off.

“So this past week you saw a couple of things, too,” Cignetti said. “And I’m sure in this game [against Sam Houston] you’ll see a few things, also. But we put a lot of time in and nothing is a sure thing. You’ve got to get the right look from the defense, but we did a nice job of executing some of the things we haven’t shown in the past. And it was a real shot in the arm for us.”

JMU got double screwed this year. First on the ranking for seeding and now a short week to get ready for Saturday. It's mighty suspicious and should be looked into.