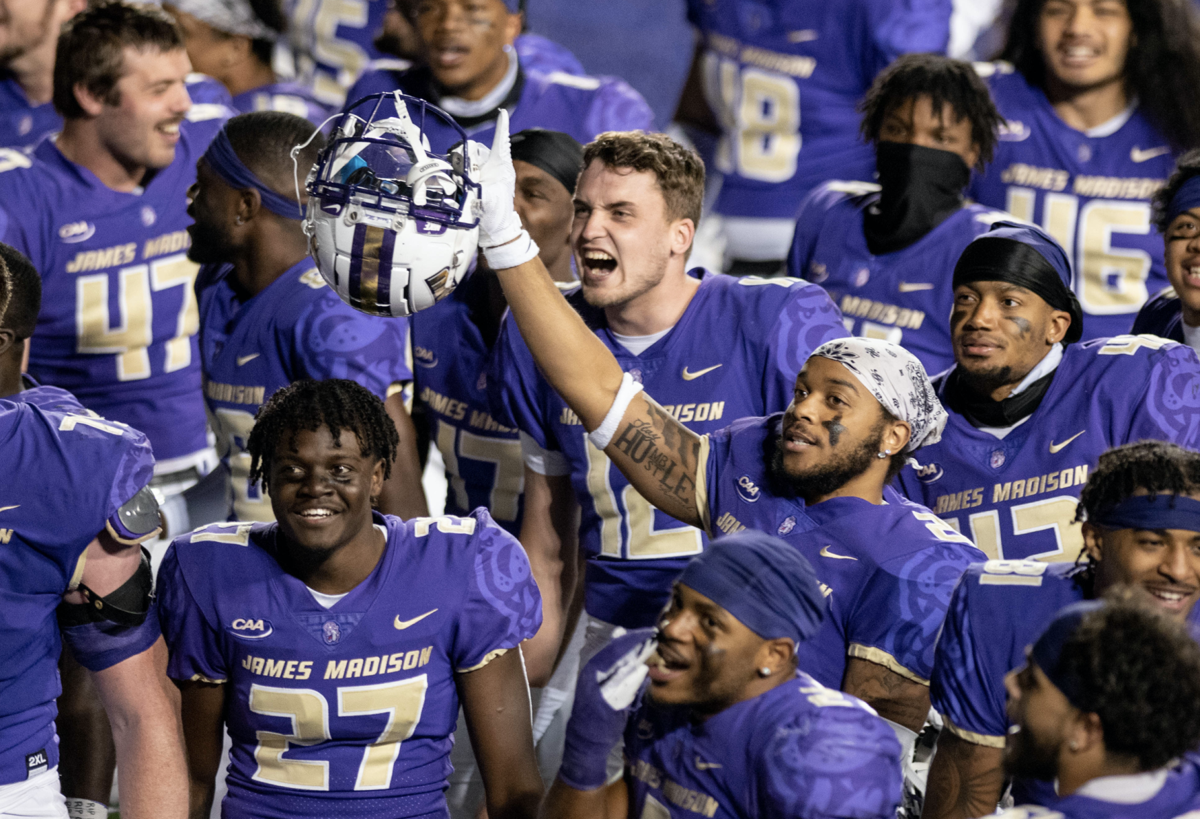 James Madison’s Cole Johnson (12) celebrates with teammates after the Dukes’ win over North Dakota on Sunday in Harrisonburg. 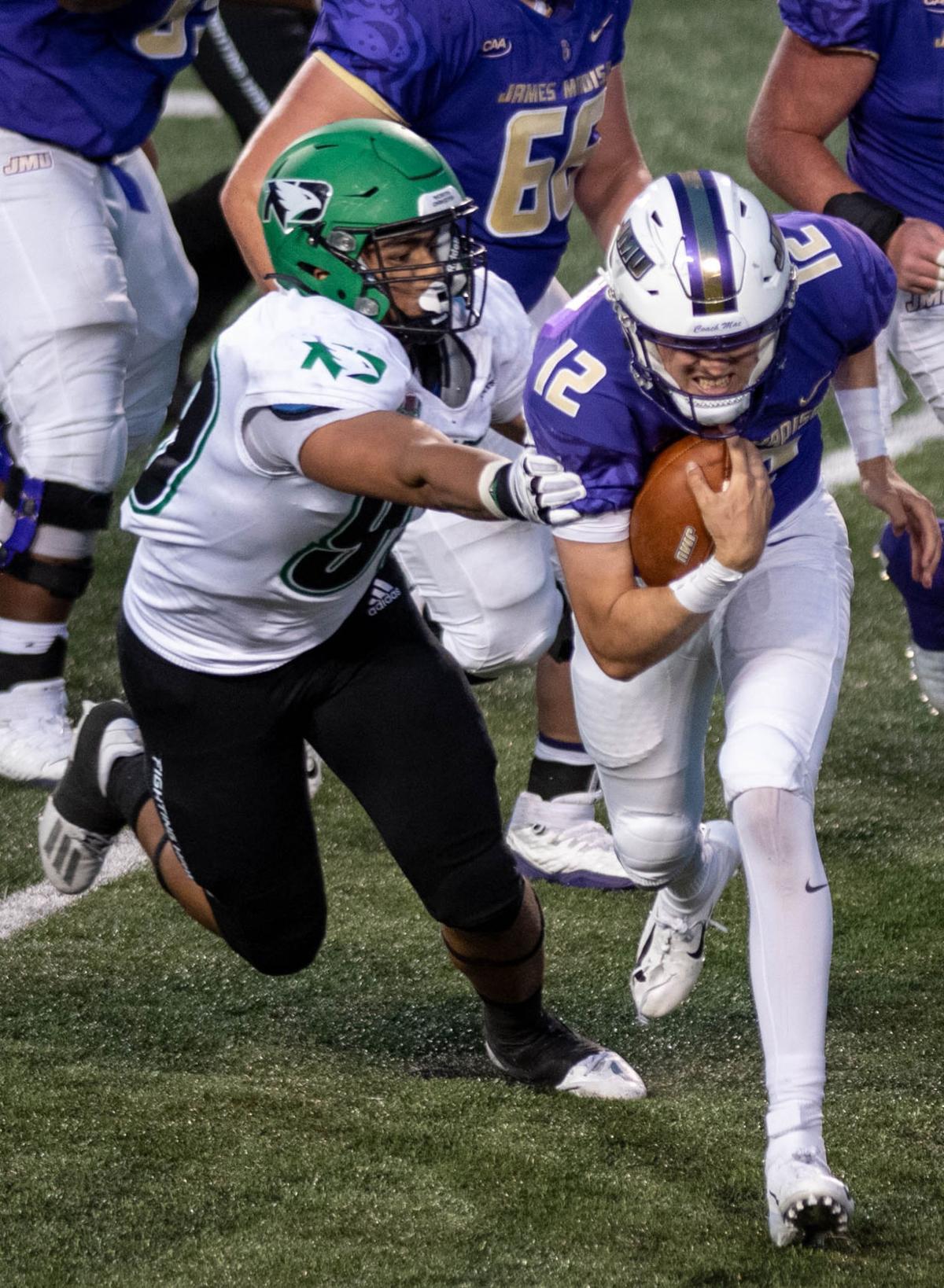 James Madison’s Cole Johnson (12) celebrates with teammates after the Dukes’ win over North Dakota on Sunday in Harrisonburg.

He’s in the significant role now, and embracing it.

James Madison fifth-year senior quarterback Cole Johnson understands part of his responsibility as the Dukes’ starting signal-caller was to get them at least this far.

“That’s just kind of the expectation now,” Johnson said following JMU’s 34-21 win over North Dakota in the FCS national quarterfinals on Sunday. “It’s to make it to the semifinals and the national championship game.”

The Virginia Beach native previously had a front-row seat as the backup quarterback during deep postseason runs in 2016, 2017 and 2019, which each ended in Frisco, Texas for the Dukes. They won it all when he was a freshman and finished as the national runner-up in two of the last three seasons.

“And before I got here, it really wasn’t like that,” Johnson said. “You win a couple of playoff games and you’re really happy, but there wasn’t that expectation of making the national championship. So, I think over the last five years here, the culture has really changed which is obviously for the better.”

Johnson’s 82 percent completion rate, 251 passing yards and two touchdowns were enough to help JMU separate from North Dakota. His two scoring strikes – both to freshman wide receiver Antwane Wells Jr. – came in the second half to solidify the victory and send the Dukes onto Saturday’s 2:30 p.m. semifinal to face second-seeded Sam Houston State in Huntsville, Texas.

Johnson is the only player on the current roster who played against the Bearkats the last time JMU and Sam Houston State met. He threw two passes and ran for 14 yards in the final quarter of the JMU’s memorable 65-7 home triumph over the Bearkats in the 2016 quarterfinals at Bridgeforth Stadium.

And that appearance was about the extent of Johnson’s playing time in playoff games prior to this spring. He made similar cameos in blowout postseason victories against New Hampshire, South Dakota State and Monmouth in recent seasons.

“It feels a lot different this year compared to the previous years,” Johnson said. “Obviously, [different] than when I was just sitting behind watching the great [former JMU] quarterbacks, Bryan Schor and Ben DiNucci.

“But it was great watching those guys, learning from them and how they handle these playoff runs with the etiquette you have to have. Obviously, the little mistakes turn into huge mistakes in the playoffs, so that’s the biggest thing I learned from them and how to carry yourself, knowing that there will be close games. Not everything will be a blowout now as some people expect, so just keep fighting each playoff game.”

The 6-foot-5 right-handed thrower showed he, too, could deal with pressurizing situations in the win-or-go-home scenario. Against North Dakota’s blitzing defense, Johnson didn’t turn the ball over and trusted his connection with Wells Jr. to keep momentum with the Dukes.

The strong performance was the latest in a string of four games Johnson has played extremely well in.

Over the last four contests, which includes postseason victories over North Dakota and VMI as well as regular-season wins over Richmond and William & Mary to clinch the Colonial Athletic Association South Division crown, Johnson completed 66 percent of his passes (55-of-86) for 910 yards and five touchdowns compared to only two interceptions. He also has a rushing touchdown during the stretch.

“What you see is every game is building off the previous game,” JMU coach Curt Cignetti said. “And he’s playing in big-time games making big-time plays and getting us out of bad plays and making plays with his legs and putting a deep ball right on the dime. You’re dealing with a guy here that’s really, really smart and has great command of the offense, and as a coach, that’s a real luxury.”

Johnson said he and Wells Jr. believe in each other, having spent time together throwing and catching on their own this offseason to gain chemistry. The quarterback noted he’d drive to Richmond throughout JMU’s winter break to work with a private quarterback coach and that Wells Jr., who lives in Richmond, would show up to catch passes.

“And it’s been really nice to develop that all season,” Johnson said.

You have to give this guy a ton of credit for sticking with the program early, being patient, and then persevering through some bumps this bizarre season. A test of character that he has passed IMHO.