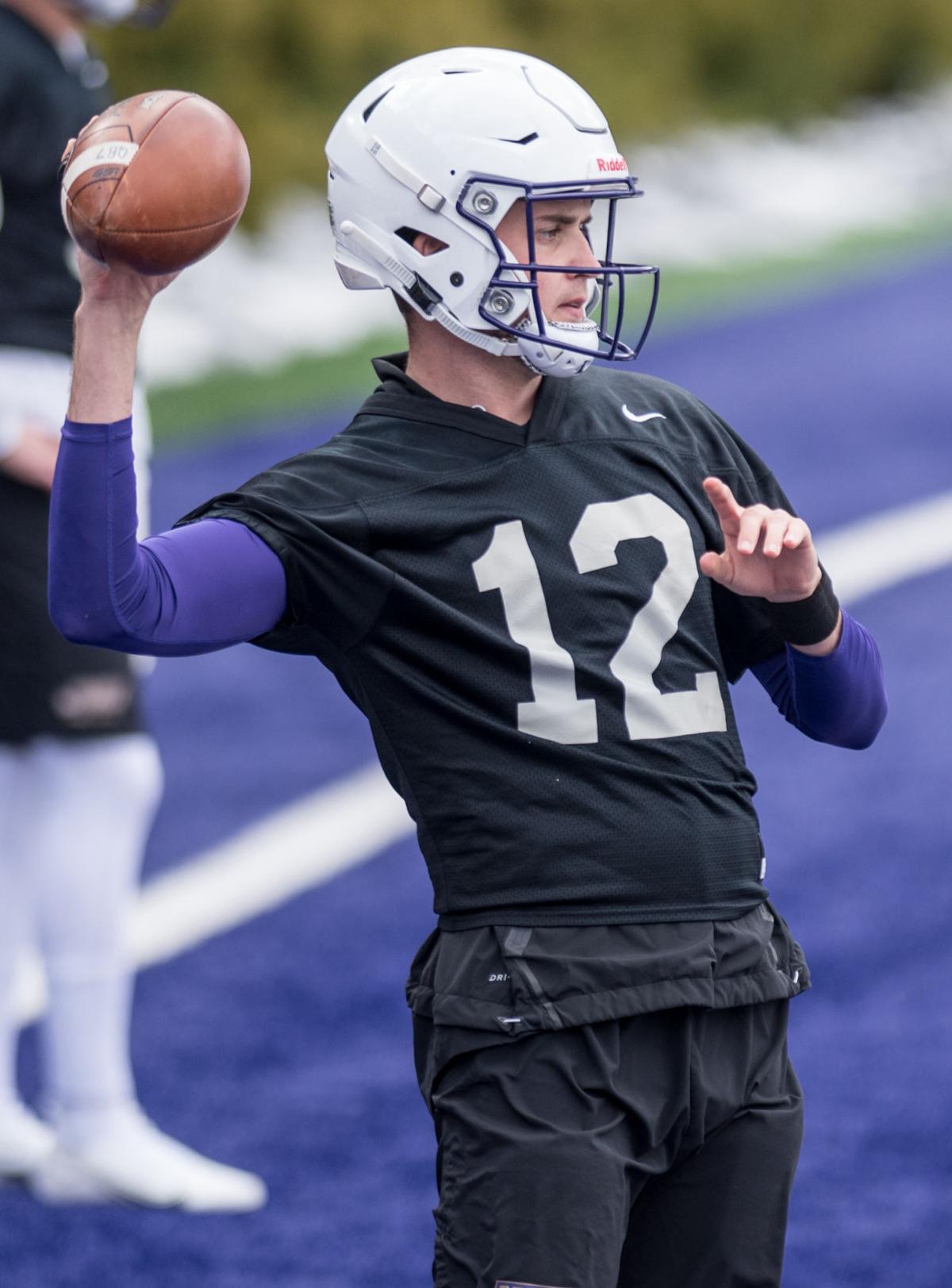 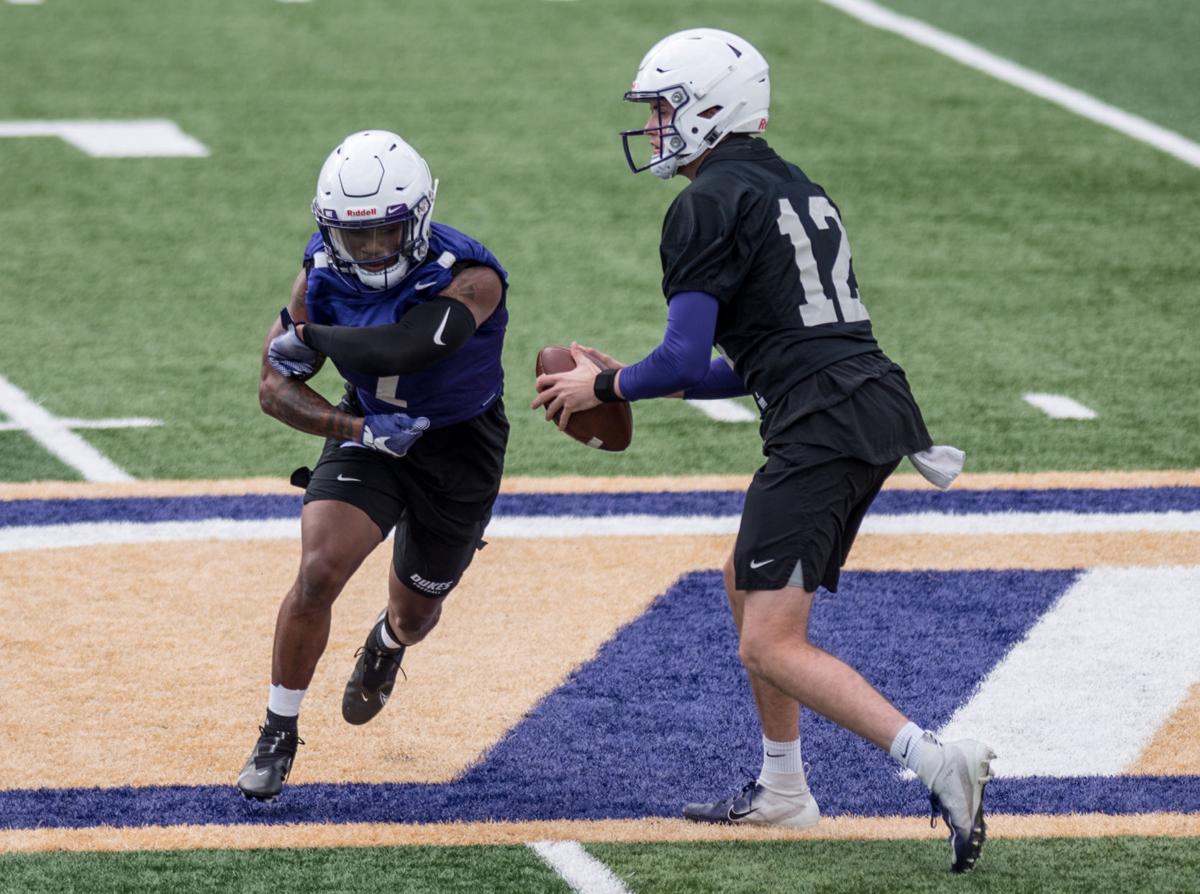 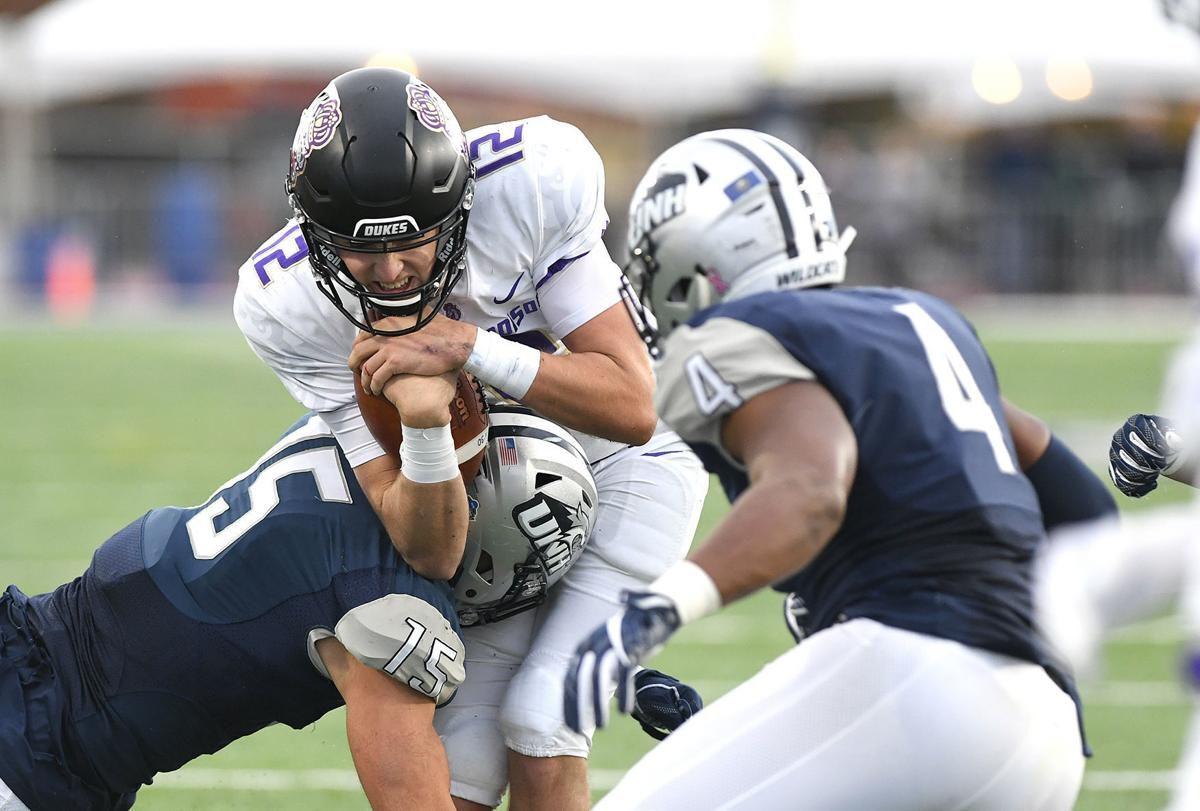 James Madison quarterback Cole Johnson (12) carries the ball during the Dukes' loss against New Hampshire in 2018 in Durham, N.H.

James Madison quarterback Cole Johnson (12) carries the ball during the Dukes' loss against New Hampshire in 2018 in Durham, N.H.

He’s the program’s connection to its recent quarterbacks and coaches of the past.

Until now, Cole Johnson has ridden alongside them in James Madison’s ascent to FCS superpower.

“I remember when Cole was getting recruited,” ex-JMU quarterback Vad Lee, a two-time Dudley Award winner, said. “When he visited JMU for the first time, I got to hang out with him.”

Former Dukes coach Mike Houston said: “[Johnson] was the first in-home visit I made after taking the job. … The day after I got the job, I called him and we had talked on the phone some, and two or three days later [former assistant] Jamal Powell and I made a trip to see him there in Virginia Beach.”

Houston, now the coach at East Carolina, said he remembers well that Johnson’s mom made one of the best meals he ever had while visiting a prospect. Houston, who departed The Citadel for JMU days earlier, kept Johnson – an initial target of the coach before him, Everett Withers – committed, and signed Johnson in the recruiting class of 2016. There was another quarterback pledge in the group, but DJ Daniels opted for a professional baseball career and never stepped foot on campus in Harrisonburg.

“We had Bryan Schor and that was it,” Houston said. “There was no other quarterback on scholarship on the roster. And so, we knew we needed to sign [Johnson].”

Since then, Johnson, a graduate of Cox High School, has primarily served as the Dukes’ No. 2 quarterback. He backed up Schor for two seasons and then Ben DiNucci for two more.

The 6-foot-5 redshirt senior enters the spring season atop the depth chart at the position and will start for JMU in its campaign-opening contest against Morehead State on Saturday.

“I’ve thought about it a little bit and it’s been great,” Johnson said, “because I’ve been working hard these past four or five years. And to see that finally pay off, it has been great.

“But for me, it’s really not going to change much. I’ve always gone about it like I am the starter just in case someone gets hurt. I don’t feel too different going into this first game, but it does feel good.”

In Johnson’s first season with the program, it seemed unlikely he’d have to wait until his fifth for the opportunity to take the reins of the Dukes’ offense and fill the role of QB1.

JMU needed him briefly when he was a freshman to fill in for the former All-American Schor, who broke his collarbone in a late 2016 regular-season contest at Villanova. All Johnson did during the cameo was prove the potential he possessed.

“Cole went from not taking a single rep to two of the biggest wins of that season right there, going into the playoffs,” Houston recalled.

Against the Wildcats after relieving Schor in the second quarter, Johnson had two throws intercepted in his first three series and JMU went into halftime tied 7-7.

Ahead of Johnson being forced into action that blustery November afternoon on the outskirts of Philadelphia, the Dukes were desperately trying to redshirt him and hadn’t played him at all. This was prior to the NCAA instituting the four-game rule in which players can appear in as many four games before burning their redshirt. In blowout games, they had used South Carolina transfer Connor Mitch and veteran Hunter Etheridge, but Mitch wasn’t there by the time the meeting with the Wildcats rolled around and this was no lopsided contest.

A win for the Dukes would give them an outright CAA championship. But a win for Villanova would push the Wildcats into a tie atop the conference standings with JMU going into the final week of the year.

“I go into the locker room and Bryan is over there in a sling in the corner,” Houston said. “Cole is sitting there looking like he’s seen a ghost or something and you’re just like, ‘We can’t blow this.’

With the conference title clinched and Schor still sideline, Johnson started the following week against Elon and impressed. He was 12-of-13 for 274 yards and two touchdowns – one a 70-yard strike to ex-receiver Domo Taylor and another to Taylor on a perfectly thrown fade route to the corner of the end zone – to earn CAA Rookie of the Week honors. Johnson also that afternoon completed a 37-yard pass to former receiver John Miller, now the JMU running backs coach, to set up a field goal.

Houston said the staff was unsure when Schor would return, so they thought Johnson could serve as their starter to at least begin the postseason. But the Dukes earned a bye week, thanks in part to Johnson admirably stepping in for Schor to help the team secure two essential wins, and the extra rest allowed Schor to get healthy for the run to the FCS crown.

“Coming in and winning the national championship that first year was pretty incredible,” Johnson said.

Johnson appeared late in playoff games against New Hampshire and Sam Houston State in that postseason.

Loyal To The Dukes

Unfortunately for Johnson, he didn’t replace Schor after Schor graduated.

He lost a position battle to Pittsburgh transfer Ben DiNucci ahead of the 2018 season and then again after Houston left for ECU and current Dukes coach Curt Cignetti reopened the competition upon arrival before last season.

“The quarterback position is super competitive,” Johnson said. “And I think it’s one of the most competitive positions in all of sports because it’s a team sport and there’s only one quarterback on the field.”

Houston and Cignetti have both said Johnson narrowly was edged by DiNucci. DiNucci elevated his game to become the CAA Offensive Player of Year while leading JMU to the FCS national title game last season. He was picked in the seventh of last year’s NFL Draft by the Dallas Cowboys and even started one game for Dallas this past fall.

“As a competitor, it’s hard to sit back and be No. 2 for that many years,” Johnson said. “So there were definitely hard days, but at the end of the day I think the best person should definitely play regardless of whether it’s me or the other person. And Ben had a great year last year, came in really prepared to camp and obviously you see that because he got drafted and everything. But I think he came in looking better than me last year and that’s why.

“So I think over the years I’ve tried to improve myself to get to the point where I’m comfortable with saying, ‘I’m the best at the position.’ It’s been hard, obviously, but leaning on your parents, leaning on your friends and family and other guys who are in similar situations, [it’s] just patience and you’ll get there eventually.”

He said he never forgets the advice Schor gave him and that was to concentrate on improving himself instead of worrying about the competition.

In a 2019 interview with the DN-R, Johnson said his goal has always been to be the starting quarterback for JMU, and in keeping that goal, it’s kept him at the school. He likely could’ve entered the transfer portal and found a place to play right away, but he never looked to do that.

During the same conversation then, Johnson said it’d be selfish of him to depart and that he didn’t want to leave teammates behind.

“I think it says an awful lot about him,” Cignetti said. “I have a lot of trust in him as a person. And he’s almost a 4.0 student and he’s been very patient, waiting on his turn. He’s a great teammate.”

Added Houston: “It’s really commendable with the maturity, dedication to the program and the school that Cole has not left because in today’s day and age to see a kid like him stay the course, it’s the thing all coaches preach to guys in that situation.”

Johnson said what he believes separated him from the competition in this go around was his improved understanding of how to operate within the offense Cignetti and Dukes offensive coordinator Shane Montgomery have in place.

“It’s really learning from Coach Cignetti and Coach Montgomery,” Johnson said, “and about how they want the quarterback to play and what they want the quarterback thinking in each situation. So, it’s different with every coach and you get accustomed to their style, but just playing smart, eliminating turnovers, knowing down and distance and keeping us out of bad situations really helps.

“That’s what I’ve focused on – keeping us out of bad situations and putting us in positive situations where we can gain positive yards.”

Cignetti said he’s seen that growth from Johnson, who enters Saturday having thrown for 1,099 yards and six touchdowns and having ran for 113 yards to go along with two scores on the ground in his career.

“I’m seeing great progress in his knowledge of how to play quarterback,” Cignetti said, “his processing of information once the ball is snapped, his decision making, his accuracy. I think the other players are seeing that also and I see the whole confidence in the offense really starting to take off. I’m really excited for Cole.”

Cignetti said although to the average fan the offense will look more similar to last year than different, his staff has tailored some of it to Johnson’s strengths and that Johnson is excelling one snap at a time. The second-season Dukes coach said the passing game made big improvements last week, which was Johnson’s first exclusively taking first-team snaps.

“With the more repetition, the better he’s getting,” Cignetti said.

Johnson said he’s looking forward to Saturday to showcase what this version of the Dukes’ offense looks like with him behind center.

“There are [receivers] like Ravenel and Kris Thornton, that I’ll say are almost impossible to overthrow,” Johnson said, “because you can launch it as far as you can and they’ll run under it. It’s been great developing relationships with those guys. Obviously this extra time has given us and [receivers] like Antwane Wells and Scott Bracey … to develop timing and route intricacies. It’s been great to do that these last couple months and we’re ready to go out there and show everybody what we’ve got.”

And the quarterback isn’t the only one anxious for kickoff. Cignetti said he’s eager to see how Johnson plays. Lee said the same and so did Houston.