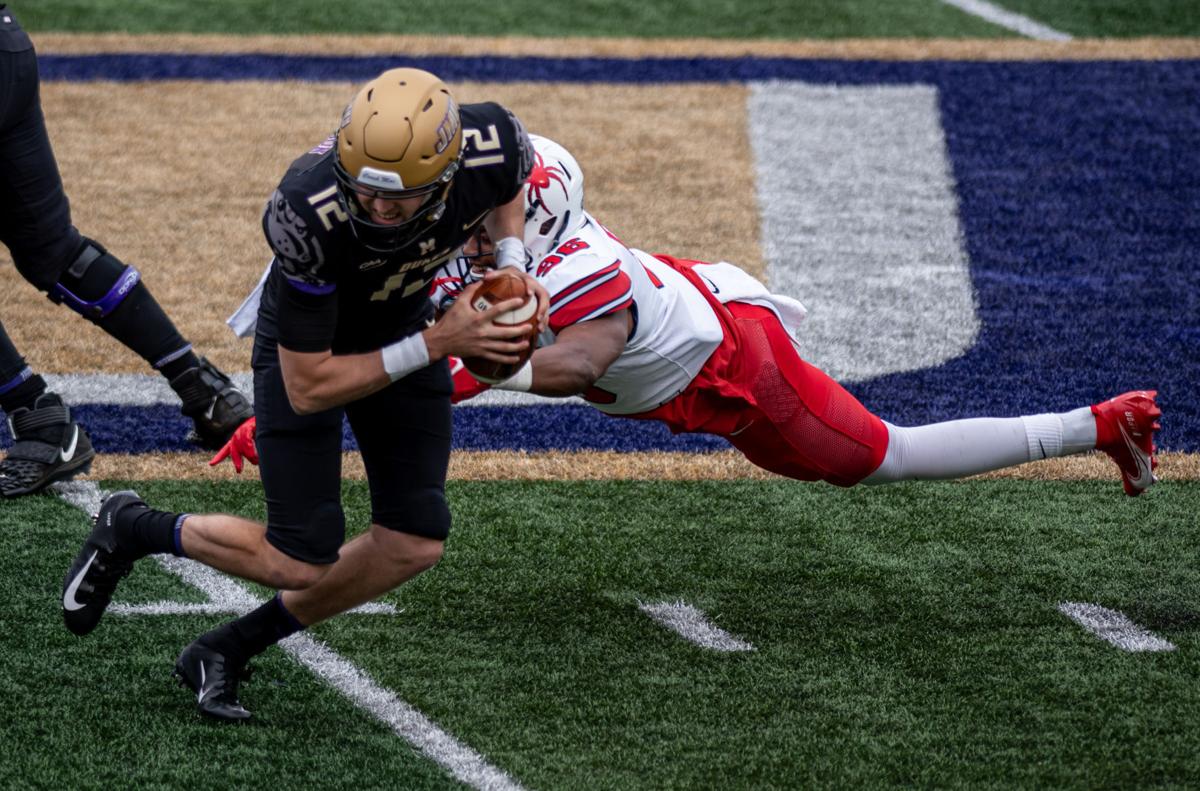 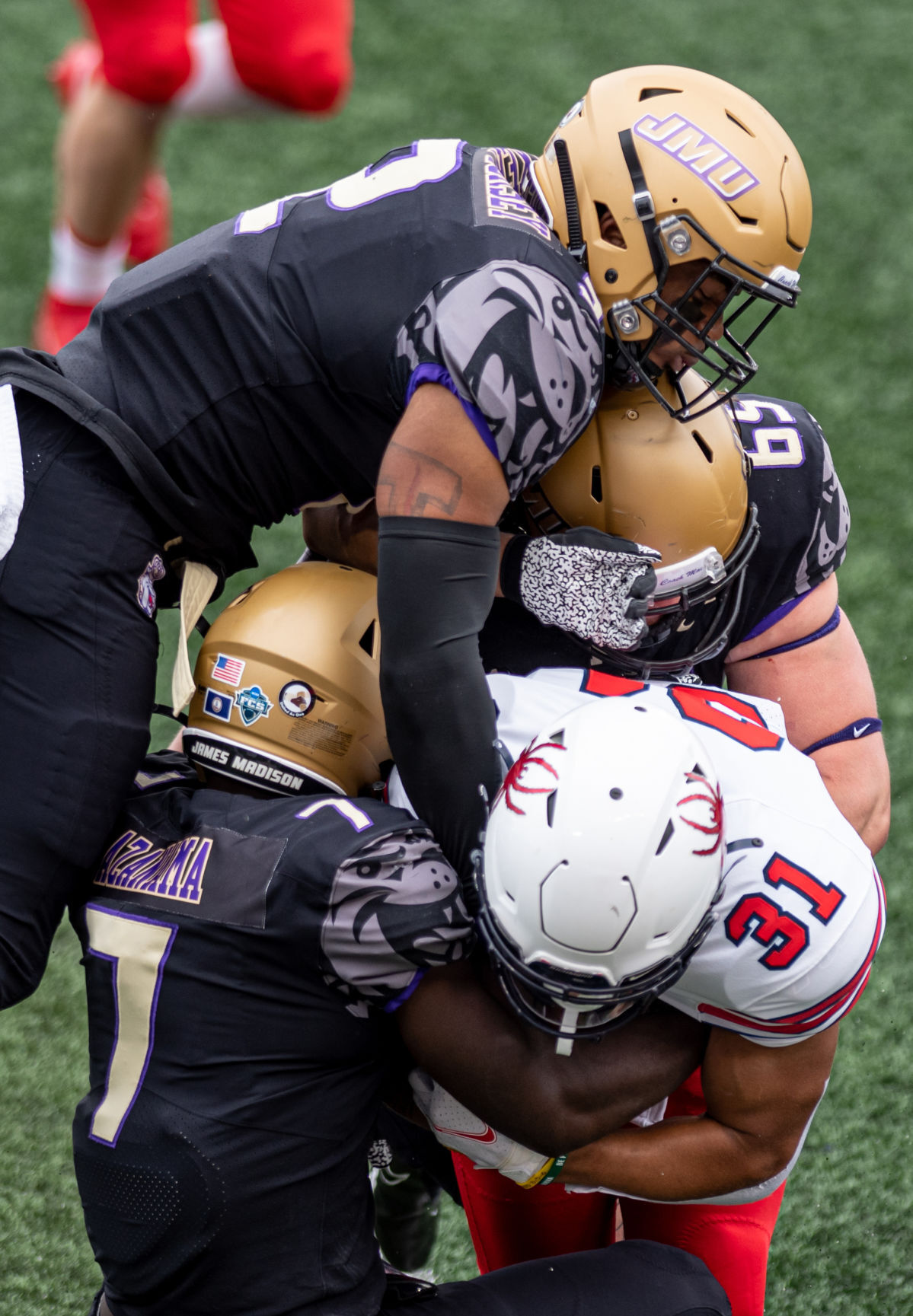 He needed only three yards, but Cole Johnson recognized the rare continuously-widening space for more.

When the James Madison quarterback dropped back after faking a handoff, he had every intent to throw the ball on the fourth-quarter, fourth-down play, his coach Curt Cignetti said. But that was before tight end Clayton Cheatham was held running his route and illegally taken out by Richmond defensive end Darius Reynolds.

“[Johnson] was supposed to throw it in the flat to Clayton,” Cignetti said. “But [Reynolds] basically tackled Clayton.”

With nowhere to throw, Johnson took off instead and used his lengthy strides to outpace pursuing defenders for a 31-yard rushing touchdown and separating score. The jaunt past the goal line put the finishing touches on the No. 1 Dukes’ 23-6 win over the No. 11 Spiders in the regular-season spring finale on Saturday at Bridgeforth Stadium.

“I was excited for Cole’s touchdown run,” JMU running back Percy Agyei-Obese said. “He literally took it himself, and wow. It was amazing. He ran it down the field and he looked like a running back out there. Cole was determined to get into that end zone.”

Said Richmond coach Russ Huemsan: “We had a blitz called and we didn’t execute it correctly. We had two or three guys make the wrong decision on what they were going to do and he was good enough to use his legs and go score. That one hurt, because we could have gotten off the field.”

JMU (5-0, 3-0 Colonial Athletic Association) captured the CAA South Division championship with the victory and will go into the postseason as an at-large selection. Delaware was awarded the automatic qualifying bid out of the CAA by a group of league athletic directors after the Blue Hens beat Villanova to win the North Division on Saturday.

Richmond sunk to 3-1 overall and in the CAA, and that mark was not good enough for the playoffs as the Spiders were denied an at-large bid on Sunday when the bracket was released.

Johnson’s rushing touchdown extended JMU’s lead from 16-6 to the score it would win by, and in doing so provided a dominant defense plenty of extra room for the final nine minutes.

Richmond quarterback Joe Mancuso, who 9-of-24 for 125 yards, wore down as the game went on.

“That definitely was part of the plan,” JMU linebacker Diamonte Tucker-Dorsey said. Tucker-Dorsey had five tackles, the second most on the team Saturday behind Wayne Davis’ seven takedowns.

“But [Mancuso] is a tough kid,” Tucker-Dorsey said. “He did take a lot of big shots and I even gave him one. But I thought he would fold earlier than he did, but I feel like he fought hard through the whole game.”

Richmond, which entered Saturday averaging 30 points per game, crossed the 50-yard line on only three occasions.

“The defense just manhandled ‘em on the line of scrimmage,” Cignetti said.

JMU began to build its lead early. The Dukes scored on the game’s first possession after Johnson’s 46-yard pass to Kris Thornton set up Agyei-Obese’s 1-yard rushing touchdown. The defense followed with a three-and-out in which Richmond lost six yards on its first series.

Kicker Ethan Ratke booted three field goals to add to JMU’s edge until Johnson’s score put it out of reach.

The Division-clinching triumph was the first contest for the Dukes since March 27 and it came in front of 5,713 purple-and-gold clad spectators. The crowd was the largest of any kind in The Valley since the pandemic put gatherings in the area on pause last year.

“Today was amazing,” Agyei-Obese said, “just to have a lot more people than we’ve had in the stadium. Hearing the Duke fans and the streamers were flying, the feeling was great.”