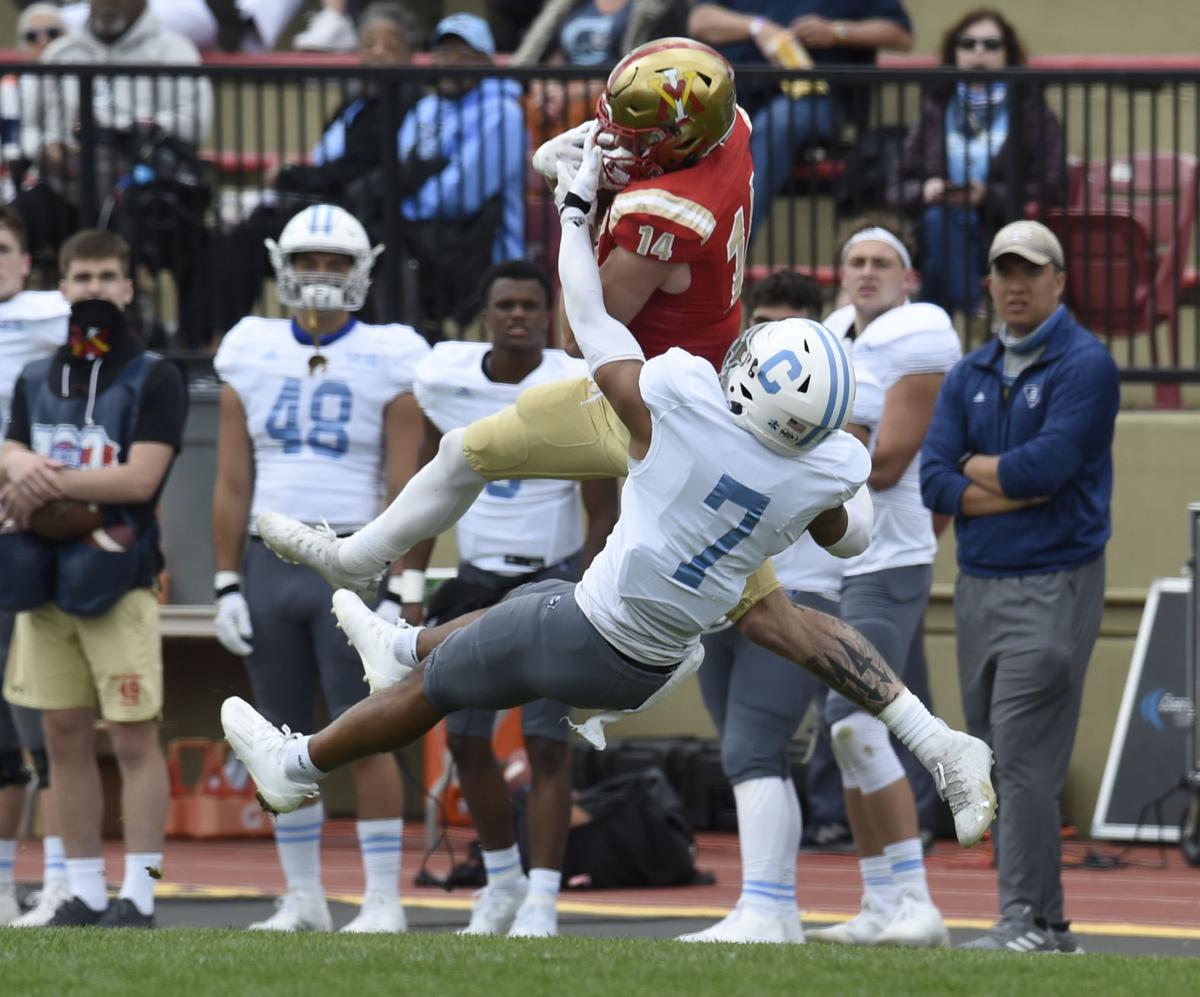 VMI wide receiver Jakob Herres pulls down a catch over The Citadel cornerback Destin Mack during the Keydets' win this past Saturday in Lexington. 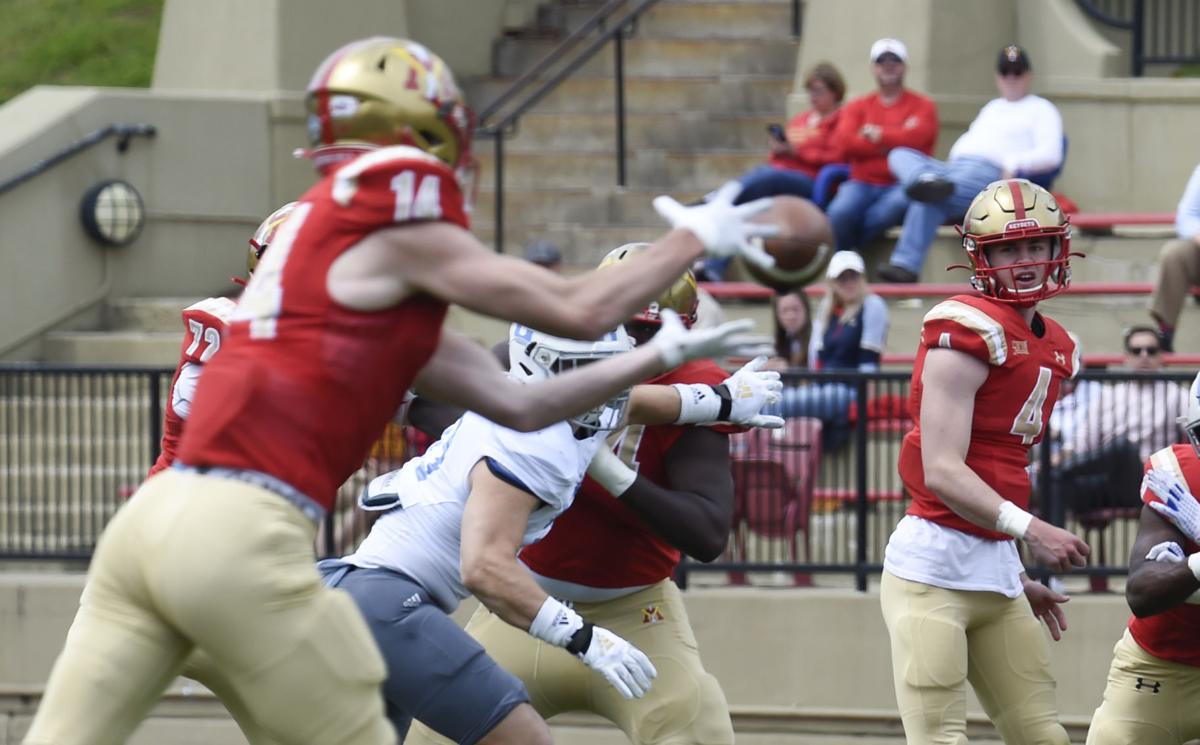 VMI quarterback Seth Morgan (4) watches his receiver Jakob Herres haul in a catch for a first down during the Keydets' win on Saturday in Lexington.

VMI wide receiver Jakob Herres pulls down a catch over The Citadel cornerback Destin Mack during the Keydets' win this past Saturday in Lexington.

VMI quarterback Seth Morgan (4) watches his receiver Jakob Herres haul in a catch for a first down during the Keydets' win on Saturday in Lexington.

James Madison can reluctantly thank itself for this matchup nightmare.

The Dukes don’t have a defensive back on their two-deep taller than 6-foot. And on Saturday in the first round of the FCS playoffs their secondary will be tasked with covering VMI wide receiver Jakob Herres, the 6-foot-4, even-longer-when-he-leaps outstanding pass catcher, who is a member of the Keydets in part due to the postseason success of an ex-JMU star.

“I was sitting in my house watching playoff games and JMU was on,” VMI coach Scott Wachenheim recalled. “Riley Stapleton was catching 10 to 15 balls a game, and we were recruiting Jake Herres at that time.”

In 2017, the 6-foot-5 Stapleton tallied 428 receiving yards and three touchdowns across four playoff games while helping the Dukes finish as the national runner-up.

Herres, a first-team All-State selection at Easton Area (Pa.) High School, said not many Division I programs were interested in him then.

“So, Jake had an offer from Army and we were trying to figure out, too, do we offer him or not?” Wachenheim said. “And we were trying to figure out why Lafayette didn’t. What did they know that we didn’t? My receiver coach said [Herres] didn’t have enough speed to come play for us, but I’m sitting there watching [Stapleton] on TV and I go, ‘I don’t care. This guy could be our Riley Stapleton.’”

Three seasons into his career, Herres is the go-to target in the Keydets’ air raid offense, the top receiver in the Southern Conference and one of the best nationally. He caught for 1,091 yards in 2019 and is having a more productive current spring. Herres is averaging 24.3 more receiving yards per game this season (115.28) than last (90.91).

His 807 receiving yards and seven touchdowns are third most in all of FCS. He is one of 16 finalists for the Stats Perform Walter Payton Award.

“I think, honestly, it was around the midpoint of last season,” Herres said that he sensed he was capable of becoming an elite player.

“Up until then, it was a few catches a game and not anything crazy,” he said. “Then, I started to have more breakout games and at that point I realized I could really do something with this. So, this past offseason was huge with trying to improve more and get better, and now I’m at the point that I feel like I’m playing at one of the highest levels in the country and I’m willing to go up against anybody.”

Said JMU coach Curt Cignetti about Herres: “Very similar type of guy [to Stapleton]. He may be a little leaner and a little quicker. … But he creates problems with his size.”

And Cignetti would know, too. He said last spring when Herres briefly entertained the idea of departing VMI and entered the transfer portal, JMU had conversations with Herres about possibly joining the Dukes and continuing his college career in Harrisonburg.

Wachenheim said he kept the door open for Herres to return and essentially recruited Herres all over again. The sixth-year coach of the Keydets and his offensive assistants called, texted and checked in daily with Herres until he decided to stay put.

Herres’ reward is he’s one of the foundational elements for VMI in its historic season.

Saturday’s 2 p.m. contest at Bridgeforth Stadium will be the Keydets’ first-ever playoff game. Their win this past weekend over The Citadel gave them their first SoCon title since 1977. And along the way, they won at Western Carolina for the first time and at Wofford, also for the first time.

To knock off defending conference champ Wofford, Herres recorded a career-high 15 catches for 207 receiving yards and three scores. He was the National Offensive Player of the Week for his effort.

“I put it a little behind [Herres], a little high or a little low and he’s getting it,” Morgan, a product of Mount Lebanon in Pittsburgh, said. “So, it’s great. We call it, ‘The Pa. connection.’ Him and Reece had it and now him and I have it. But [Herres] does some tremendous things on the field as you can see and so it’s awesome playing QB for him.”

Herres has worked relentlessly to keep improving, according to Wachenheim, a former assistant in the NFL with the Washington Football Team and in the FBS with Virginia prior to landing the head gig at VMI.

“He’s a tremendous competitor,” Wachenheim said of Herres. “I coached Chris Cooley with the Washington Football Team and Chris Cooley was the most competitive receiver I’ve ever seen. He wanted to win every single one-on-one rep he got as a route runner and Jake Herres brings that same attitude. He’s faster than people think. He’s got great hands and runs great routes and he’s a competitive football player.”

“They like to press the corners and play some cover four,” Herres said. “I know we can definitely get after ‘em a little bit, but I know they’re going to come with a chip on their shoulder and come after us, but we’ll try to hit ‘em right back and go get this W.”