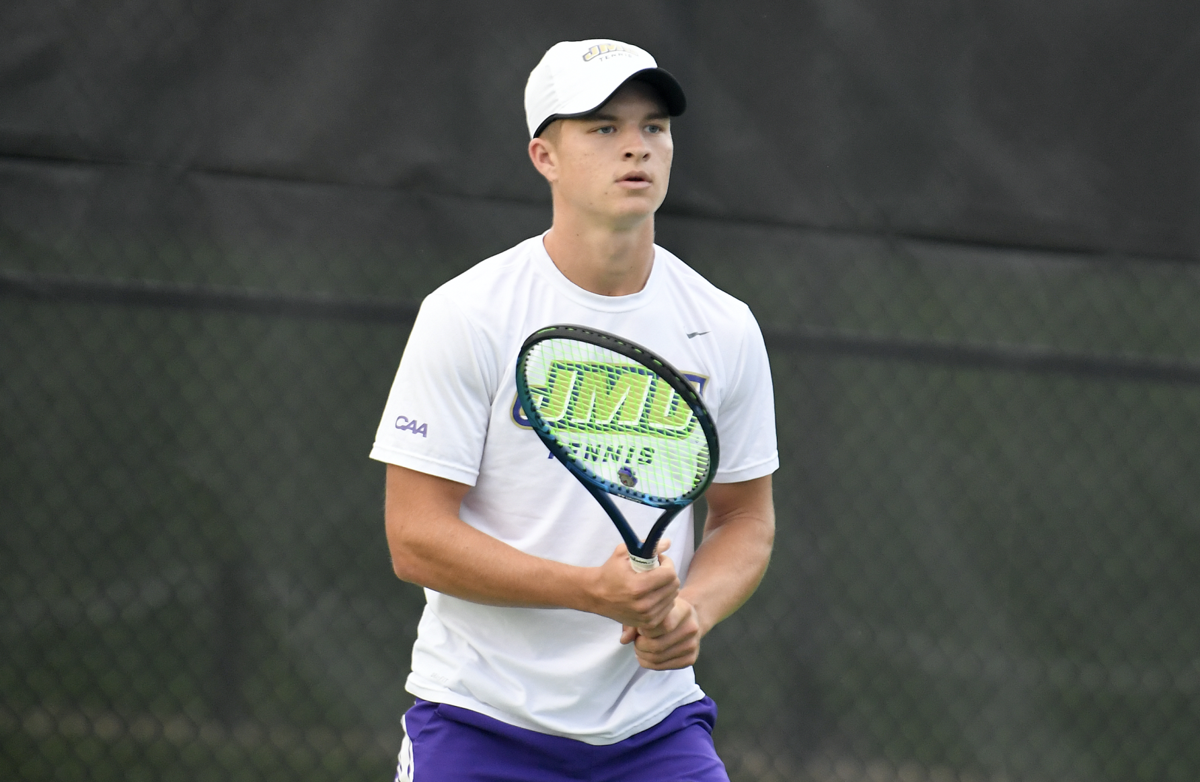 James Madison's Holden Koons gets set during a practice last month in Harrisonburg. James Madison's Holden Koons gets set during a practice last month in Harrisonburg.

All he had to do was run through the list of competitors to understand his accomplishment.

James Madison’s Holden Koons achieved something no member of the Dukes’ program had before when he reached the main draw of the Intercollegiate Tennis Association Men’s All-American Championships last week in Tulsa, Okla.

“Being in the final 64, you have these guys from all over – SEC, Big Ten, ACC – and they see James Madison’s name right there along with my name next to it, too,” Koons, a junior, said while reflecting on his feat, “so to have my name associated with it was a huge honor. I was so excited.”

The mega bracket begins with a 256-player pre-qualifying draw with 128 players advancing into the qualifying draw before finally reaching the main event featuring the best of the best 64 players in the sport.

“It’s probably as close to the NCAA tournament as you can get,” JMU coach Steve Secord said. “We used to have a couple of other tournaments that we sort of viewed as the grand slams of college tennis. So, you have All-American [Championships]. Then, we’ve got an [ITA regional] qualifying tournament coming up and the country is divided into different regions, which all the individuals are trying to move forward to national indoors which is later in November. Then there’s the NCAA individual and team tournaments at the end of the spring season, so those are kind of the biggest events.”

Dukes assistant coach Jason Sinkoff, who went with Koons and Dukes senior William Karpinski to Oklahoma for the tournament, said Koons’ performance grabbed the attention of everyone in the sport.

Koons, who said he thought he’d have to participate in the pre-qualifying round, was automatically elevated into the qualifying portion of the tournament because of the ranking he finished with this past spring.

“He played the No. 1 player from Texas A&M,” Sinkoff said, “who is a top, top player and in typical Holden fashion, he started down in the first set and then after losing the first set, we talked and figured out a way for him to grind his way back into the match. And it started with making more first serves and having to hit a bigger ball and be the one that’s the more offensive player. Holden is someone easy to work with, listens well and he was able to find his way into that match and then he believed it a little more and won that match.”

Koons, an All-Colonial Athletic Association first-team singles and doubles choice last year, said leading into the fall he worked to improve his game, which included an opportunity to learn from pro tennis player Ernests Gulbis. Gulbis is from Latvia, but was playing in a tournament stateside and needed a hitting partner for the event. That’s where Koons came in.

“It’s a different level, so it was pretty humbling,” Koons said with a laugh. “But I was grateful for the experience I had this summer, and he was a nice guy giving me insight on the tennis world and I mean, playing with him and the event I played this past week were highlights for me.”

According to Secord, two years ago Texas A&M’s Rollins beat Jenson Brooksby, an up-and-coming pro player who took a set at the US Open from Novak Djokovic, the top-ranked player in the world.

“Not only for Holden gaining confidence,” Sinkoff said, “but it was kind of a wake-up call to honestly the rest of the country. It’s a match where with how Holden did in it, it put JMU on the map in terms of tennis. These are top schools from all over the country and for someone from James Madison, and we have a strong tennis program … but having Holden win that match and make it to the next round, it was eye-opening. I had a lot of coaches come up to me and say congrats on your player.”

Koons ultimately dropped his last qualifying match to Southern California’s Stefan Dostanic ahead of earning a ‘lucky loser’ slot into the round of 64. In the main draw, he played tough against No. 4-seed Finn Reynolds of Ole Miss but lost, 7-6(4), 6-3.

Karpinski performed well, too, picking up a 6-0, 6-3 win over Tulsa’s Matthan Tharakan in pre-qualifying before losing to North Carolina’s Logan Zapp.

“It’s a very cool experience just because I think with the people you’re playing against,” Karpinski said, “you’re playing against really good competition. And I thought a really cool part of it was seeing people who have so much success in what they do and how professional they are before and after matches and watching them practice. You got to see so much from so many different schools and they’re some of the best players in the country.”

Both Karpinski and Koons said they both got a boost in confidence because of how they played in the event.

And now the Dukes are hoping two of their best players can carry it forward the rest of the way this fall and into the spring when they try to win the CAA and get to the NCAA tournament.

“There’s definitely a big confidence factor for he and I,” Koons said. “There was one Elon player there, but besides that there were no other players from the CAA. The CAA has sent players over the years, but as far as this year, we saw what the [top] competition looks like and we’re aware of the difference in what their game is and our game is, and it gives us a good mindset of where we’re at.”