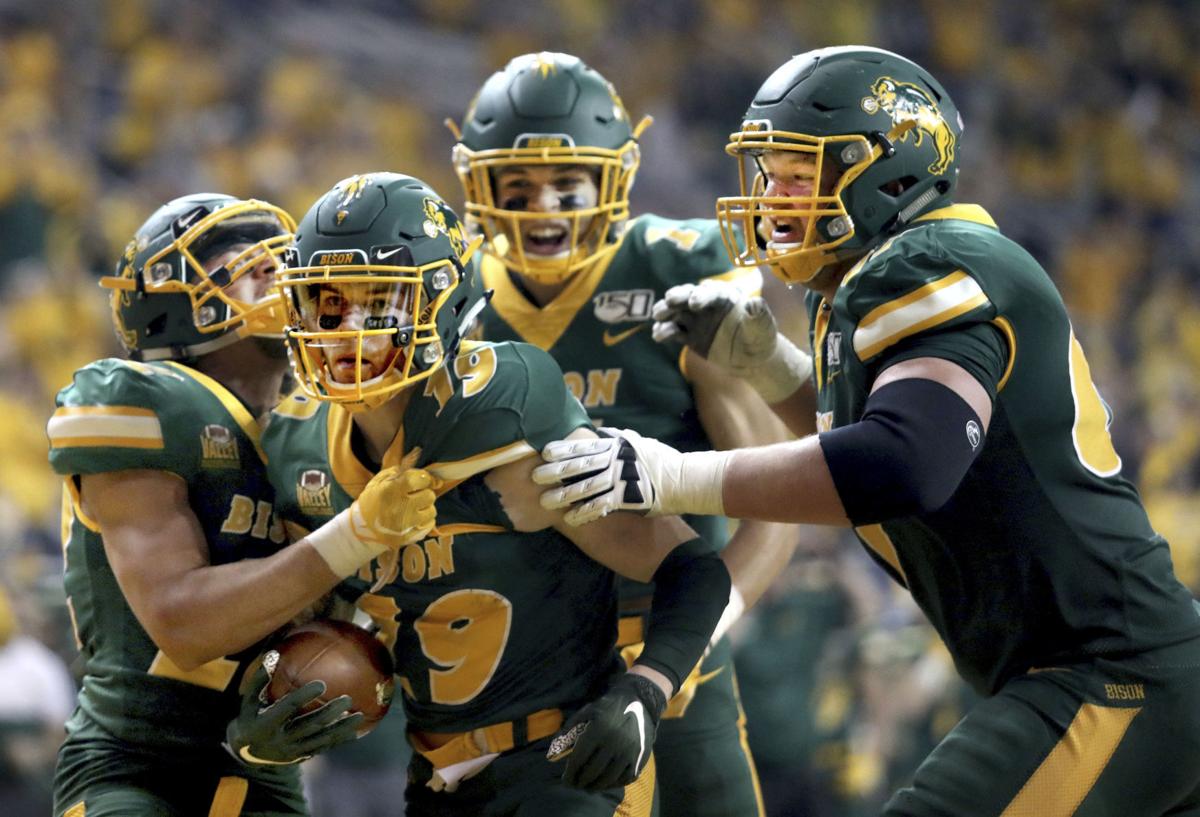 North Dakota State wide receiver Jimmy Kepouros (19) celebrates with teammates after scoring a touchdown during the Bison's win over Montana State in the FCS national semifinals last month at the FargoDome in Fargo, N.D. 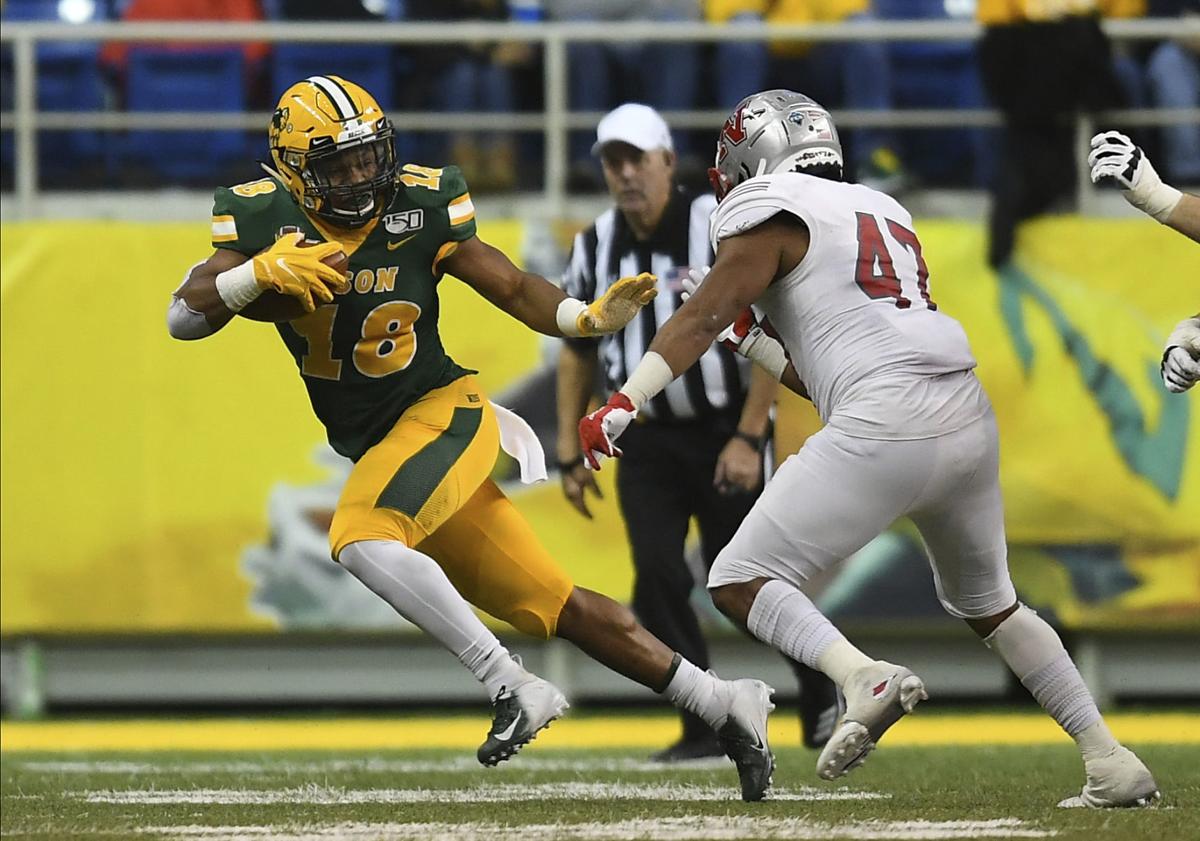 North Dakota State running back Adam Cofield (18) avoids a defender during the Bison's win over Nicholls State in the second round of the FCS playoffs last month at the FargoDome in Fargo, N.D.

North Dakota State wide receiver Jimmy Kepouros (19) celebrates with teammates after scoring a touchdown during the Bison's win over Montana State in the FCS national semifinals last month at the FargoDome in Fargo, N.D.

North Dakota State running back Adam Cofield (18) avoids a defender during the Bison's win over Nicholls State in the second round of the FCS playoffs last month at the FargoDome in Fargo, N.D.

There’s no reason for Matt Entz to worry now.

The first-year North Dakota State coach has the Bison in the same spotlight they’ve stayed put in for the last decade.

North Dakota State will try for its eighth national championship in the last nine seasons when it faces James Madison for the FCS crown on Saturday at noon at Toyota Stadium in Frisco, Texas.

“My number one motivational tool this year was, ‘Don’t screw it up,’” Entz said.

Elevated from defensive coordinator to coach after former Bison headman Chris Klieman left for the same job at Kansas State last winter, Entz’s promotion was one of a few changes that could’ve left the perennial power in the subdivision with too many adjustments to make this season.

Former quarterback Easton Stick, who helped hand JMU a loss in the 2017 championship game, graduated on the heels of leading North Dakota State to a second title in as many years and was a fifth-round pick of the Los Angeles Chargers. Others multiyear starters like defensive end Greg Menard, center Tanner Volson and running back Bruce Anderson graduated, too.

“Like we always say, ‘tradition never graduates,’” North Dakota State junior running back Adam Cofield said. “We had a bunch of coaches leave and a lot of talent graduate, but the tradition still carries on and we just take it day-by-day and work hard, compete and improve.”

The Bison have won 36 straight to maintain the longest winning streak in the history of FCS entering Saturday’s contest. But that lengthy run of victories isn’t discussed among players or coaches in Fargo, N.D., because they’re always concentrated on what’s next, according to senior defensive end Derrek Tuszka.

“We don’t think about that. Any of the winning streak, personal accolades,” Tuszka said. “Any of that stuff. None of that really matters because it’s all about the team, and when you can buy in and really focus on the team and winning every single day, that’ll take care of itself. The staying humble, staying hungry and not getting complacent, that’s what we do here, and I’m sure that has a direct correlation to our success.”

Tuszka said Entz has kept the foundation of the program the same along with the defensive system, but put his own touch on North Dakota State football by allowing veteran players to voice their opinions, making for a smooth transition into spring practice following Klieman’s departure.

“He’s really relying on the older guys,” Tuszka said. “And he wants to make sure we’re part of a lot of his decisions, that way there isn’t anything the players don’t agree with.”

Entz said it was during the offseason he and his staff started to realize the potential for this year’s version of the Bison.

“I thought as the summer passed we saw more and more leadership coming out of our younger classes,” Entz said, “and that probably gave myself and our coaching staff a boost of confidence knowing that we could push this group a little bit more than maybe we’d anticipated.

“Then seeing the play out of our quarterback, Trey Lance, in fall camp, again, gave us some confidence on the offensive side that we’d be able to move the football.”

About the freshman Lance, who was the Missouri Valley Conference Offensive Player of the Year, Cofield said: “What makes him really special is how hard he works. A lot of people don’t see that. He comes up here and watches film every day. I see him whenever I come in here to get treatment. He’s on his iPad or studying his playbook, and so we all just like to keep going off of what he does and he’s had a great year.”

The work ethic is no coincidence either, Tuszka said, because young players like Lance simply follow the upperclassmen when they realize the expectation that lies within the program.

It’s why in a year when many thought the Bison would lose a game or two because of quick-changing circumstances, they haven’t.

“Doesn’t matter who is playing or who is coaching,” Tuszka said. “That’s the expectation.

“I knew it wasn’t going to be a drop off. We had a lot of people outside of the program talking about how we weren’t going to be great – new coaches, a lot of young guys and not a lot of seniors – but within the program, we didn’t let in any of that outside distraction and outside noise.”