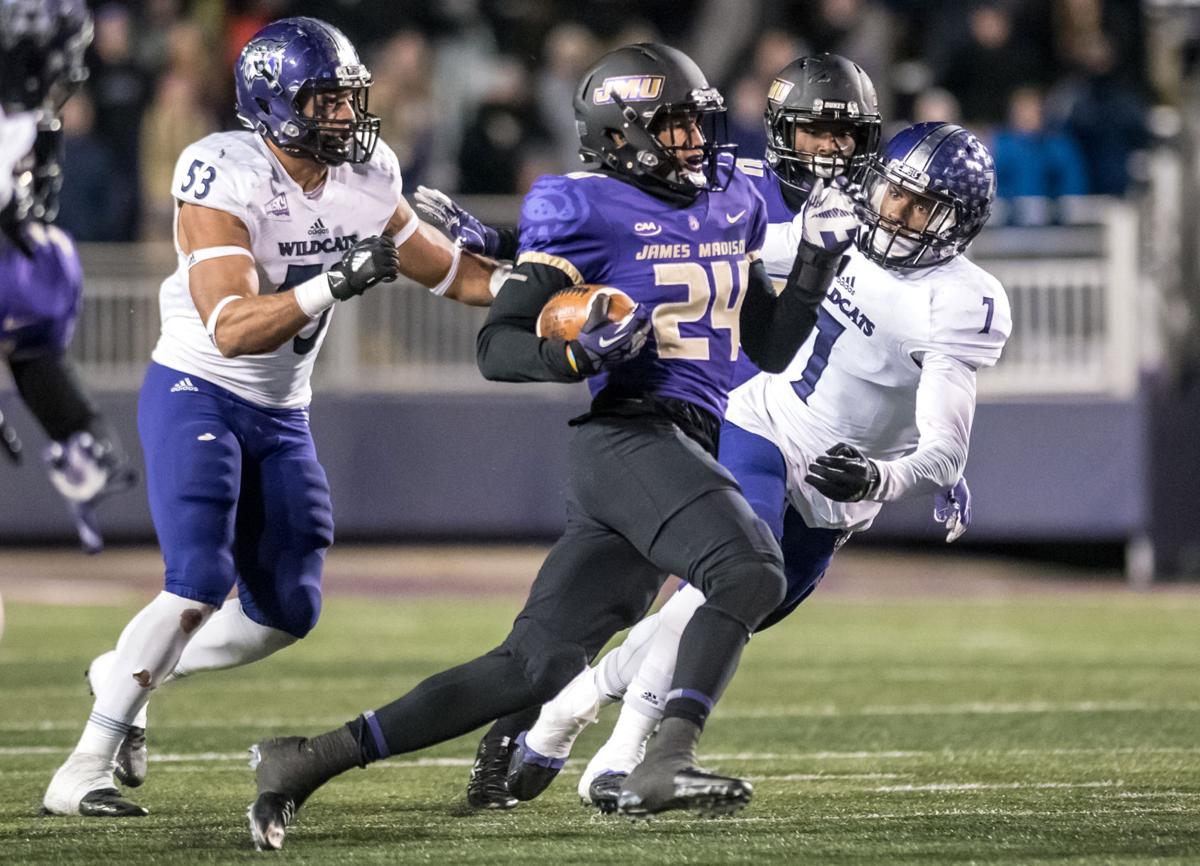 James Madison safety D'Angelo Amos (24) charges up the field as he returns a punt during the Dukes' win over Weber State in the 2017 FCS national quarterfinals at Bridgeforth Stadium. 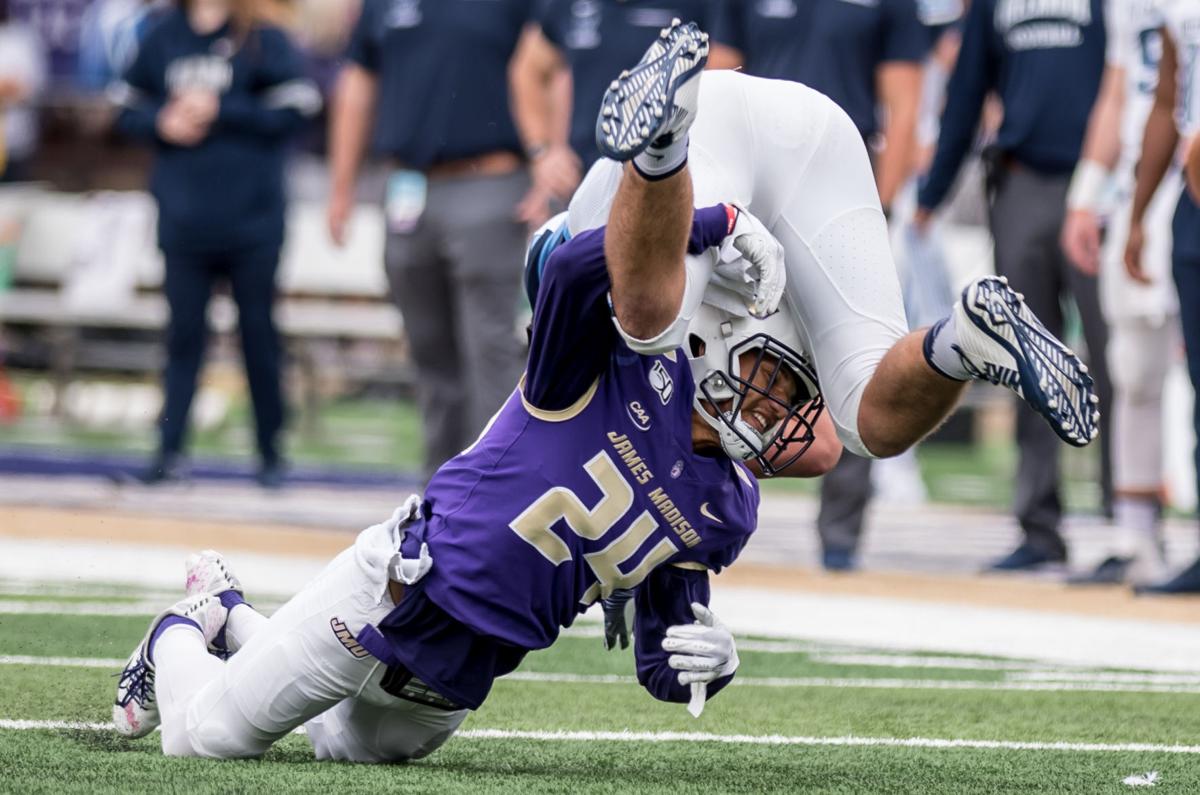 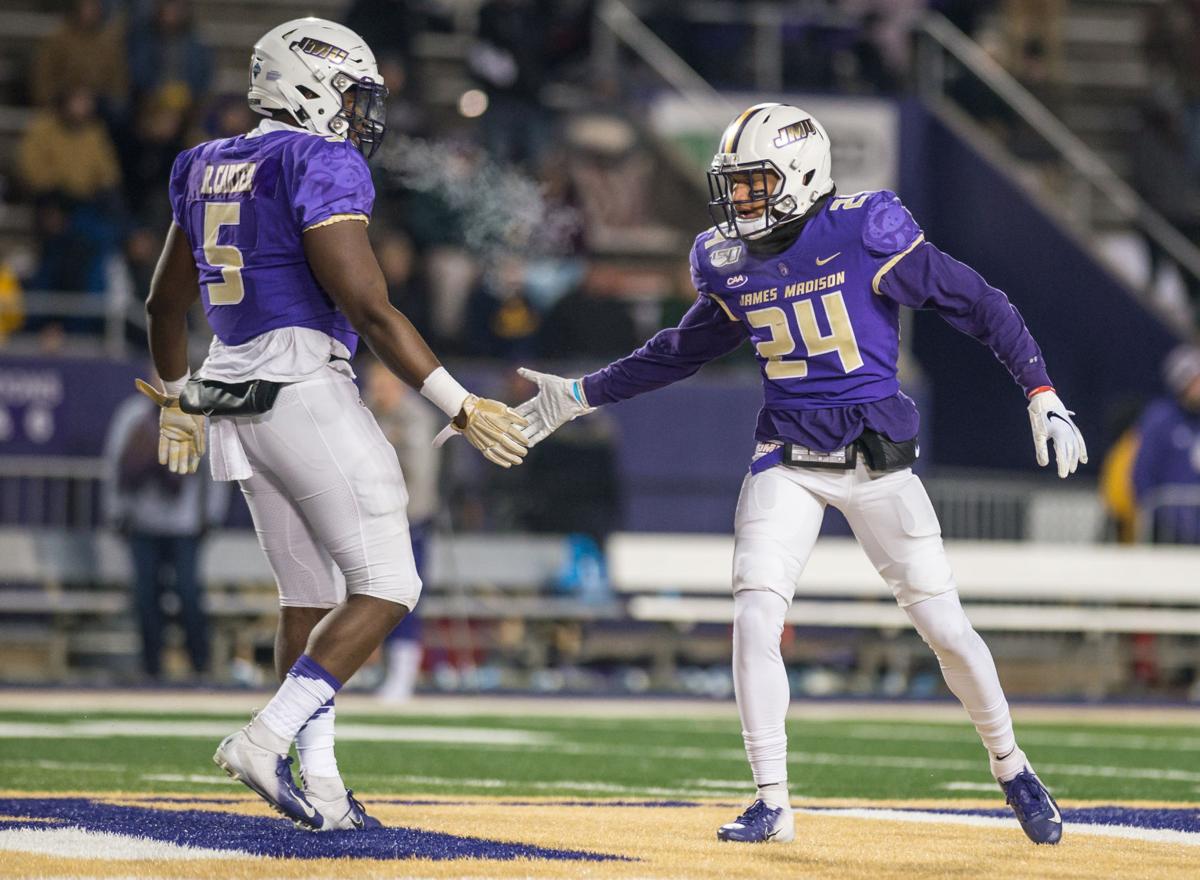 James Madison safety D’Angelo Amos (24) celebrates with defensive end Ron’Dell Carter (5) during the Dukes’ win over Weber State in the FCS national semifinals this past December in Harrisonburg.

James Madison safety D'Angelo Amos (24) charges up the field as he returns a punt during the Dukes' win over Weber State in the 2017 FCS national quarterfinals at Bridgeforth Stadium.

James Madison safety D’Angelo Amos (24) celebrates with defensive end Ron’Dell Carter (5) during the Dukes’ win over Weber State in the FCS national semifinals this past December in Harrisonburg.

He didn’t miss or skip a day of preseason strength and conditioning drills with James Madison.

D’Angelo Amos is still in Harrisonburg and he said he was readying for his senior year with the Dukes before making a decision he never thought he’d have to make.

“It’s not something I wanted to walk away from or anything like that,” Amos told the Daily News-Record on Thursday. “I always wanted to finish my career at JMU, especially after leaving West Point Prep, just because of the relationships I have here and the reputation I’ve built here at JMU.”

The FCS All-American punt returner and All-Colonial Athletic Association first-team safety entered the transfer portal late Wednesday, and he said opting to do so wasn’t easy, but was done out of concern for his future.

Amos doesn’t want to jeopardize his NFL chances and he believes it’s more likely the FBS plays this fall than the FCS.

Earlier Wednesday, the NCAA announced a decision on the fate of the FCS postseason could come as late as Aug. 21 and that it’d take at least 50 percent of all playoff-eligible programs to compete this fall in order for the FCS championship to be held. Due to the pandemic, the Colonial Athletic Association isn’t holding a season this fall, and JMU had been pursuing an independent schedule until deciding Thursday to hold off on the start of its training camp.

As a graduate transfer, Amos would have immediate eligibility at his next stop.

“I know a little bit about my platform in where I stand as far as an NFL player goes,” Amos said. “And that possibility isn’t a long shot at all. … And for at least right now, they’re not moving the NFL Draft and if they have the all-star games, they’re not moving any of those, so to me it was just putting myself in the best opportunity, the best chance to be prepared for any outcome and give myself the best shot to further my career path after college.”

Amos, a 23-year old, said he thought a lot about his age and how the NFL’s opinion of him could vary if he doesn’t play this coming fall.

“That’s something a lot of people may not know about,” he said, “with being one of the older guys on the team at JMU after spending a year at West Point and then four years in college. To me, my age does come into play.

“If we had to wait until next fall to play, then I would go into the NFL Draft at 25 [years old].”

NFL Draft Bible scouting director Ryan Roberts said Amos is making the smart choice of exploring the chance to play in the FBS for a year because it keeps his pro aspirations intact.

“So not only would age be a factor, but he’d also be an older player coming out of the FCS level,” Roberts said. “I feel like you’re piling on too many questions. Even though the JMUs and North Dakota States of the world play great football and could play on the FBS level in a few different conferences, there will be people that look and say [Amos] played against smaller schools and we haven’t seen him against consistent competition.”

Amos said his preference is to land with a Power Five program. He said since entering the transfer portal, he’s already heard from more than 20 interested schools, including Virginia, Virginia Tech, Wake Forest and West Virginia.

“I’m keeping my options open and making sure I don’t allow myself to make a decision based on glam, status or history of a program,” Amos said. “It’s got to be what’s best for me to keep my stock the same or improve it as far as the NFL Draft.”

Roberts said: “His ability as a punt returner, that’s the valuable weapon to have. That’s a clear transition to the NFL. And when I watched his film from last season, he has athleticism that’s right on par NFL wise and he covers a ton of ground in deep coverage. He has relatively good eyes in zone coverage and I was surprised with how physically he played. I didn’t expect to see that from a 180-pound safety. He’s a little thin framed, but he showed he wasn’t afraid to throw his body around.

“At worst I think he’s a late Day 3 player,” Roberts continued, “just based on those attributes and if someone nitpicks about the level of competition. But if he has this opportunity now to play in the FBS where the athleticism is more even and he’s able to make some of the same plays he makes, I think he can be an early Day 3 guy.”

He served as the Dukes’ primary punt-return man for the last three seasons and started at free safety in each of the last two years.

Amos tied single-game program records with two punt-return scores, longest punt return (89 yards) and total punt-return yards (183) in a 2018 contest at Villanova when he registered the touchdowns on consecutive attempts. He ranks second all-time at JMU for career punt-return yards (1,259) as well.

And on defense, Amos racked up 135 tackles, 6.5 tackles for loss, two sacks, two interceptions, 11 pass breakups and a forced fumble in 44 games with JMU.

“It’s like the recruiting process all over again except the ball is in my court now,” Amos said, “and I have a little bit of the upper hand because I have college experience. It’s not like a high school player where you don’t know what you’re getting or you’re just looking at potential as you develop. I’m developed. I’m seasoned. I have game-time experience. I have everything a veteran in college should have.

“And I kind of understood that a lot of teams could use a dual-threat with me being a defensive back and an impactful special teams guy, so I felt like the options were there and now I actually know what some of the options are.”

One option Amos didn’t rule out is a return to JMU if he can’t find what he’s looking for from a Power Five program or if more clarity and certainty about a season comes from the FCS. He said he has great trust in Dukes coach Curt Cignetti, his assistants and the players, and that he had no problem making some of his teammates aware of his plans to enter the transfer portal before he did it.

“They’re just very understanding,” Amos said. “Coach Cignetti doesn’t think just from a coaching standpoint, but from a personal standpoint, too. That’s kudos to him and the staff, because they know I need to put myself in the best situation. And with the chances of not having a season they understand I’ve got to do my homework, because if we cancel and guys have to find somewhere to go, the window of that time frame is dwindling down every second.

“If it works out, then obviously I’d come back. It’d be a little weird. It’d be awkward, but it’s understandable. It wouldn’t be hard feelings, though, and it wouldn’t be ‘oh you bailed on us,’ because that’s just the relationship we have.”

He said if he has played his last game as a member of the Dukes, he’d miss the bonds he created with his teammates the most.

“Honestly a lot of my top moments have really come in that locker room,” he said. “That’s where the memories are made and that’s what makes the moments on the field that much greater.

“My freshman year in that locker room was Raven Greene, Aaron Stinnie, Taylor Reynolds, A.J. Bolden and all of those older guys, and they really set the tone for a lot of us. Dimitri Holloway, too. Those guys that I had to go against when I was starting off as a young guy really set the tone for where I need to be and how I needed to improve, and so the memories inside the locker room and more so in practice than games each year are the biggest moments to me. Winning the national championship was great and going in three of the last four years was great too, but it’s really my teammates.”