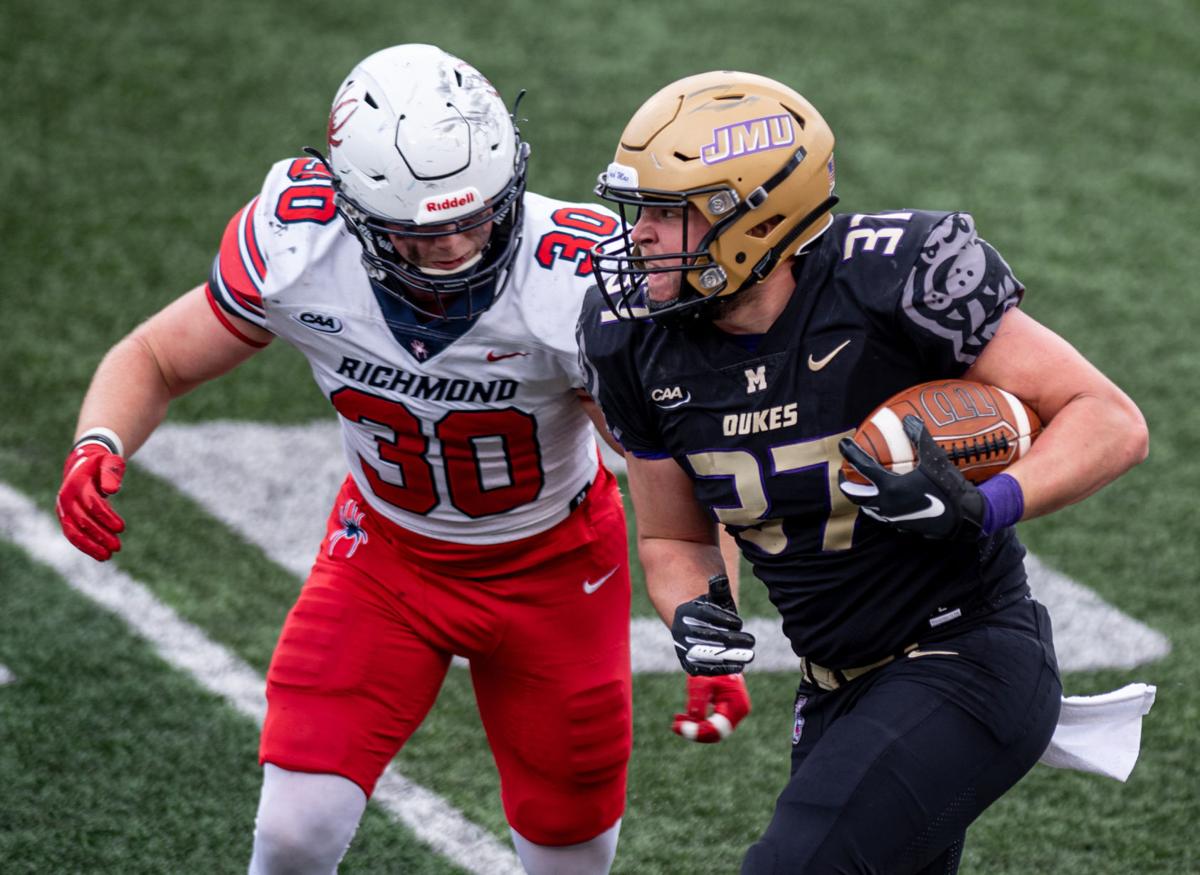 James Madison tight end Clayton Cheatham (37) runs the ball up the sideline after a catch during the Dukes’ win over Richmond April 17 in Harrisonburg. 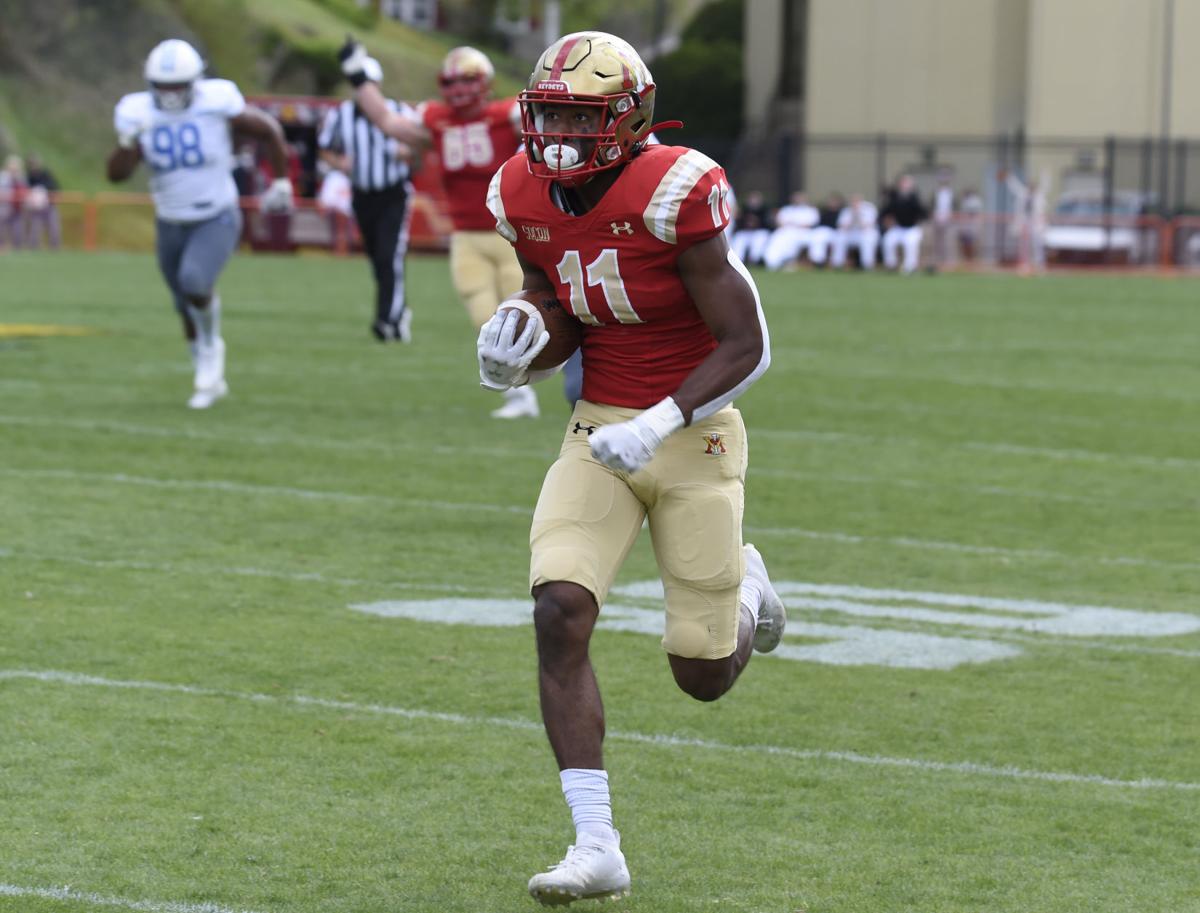 VMI receiver Michael Jackson breaks down the sideline after making a reception to score against The Citadel April 17 in Lexington.

James Madison tight end Clayton Cheatham (37) runs the ball up the sideline after a catch during the Dukes’ win over Richmond April 17 in Harrisonburg.

VMI receiver Michael Jackson breaks down the sideline after making a reception to score against The Citadel April 17 in Lexington.

Neither side knew whether or not this point was reachable.

James Madison never doubted its capability. But the Dukes, a perennial power in the FCS, did ponder during this particular campaign – one filled with a pair of long COVID-19-forced layoffs – how they’d be evaluated by the subdivision’s playoff committee.

Before beating Richmond in a make-up contest on the final Saturday of the regular season this past weekend, JMU didn’t play on four of the five previous Saturdays.

“After the William & Mary game,” Dukes senior offensive lineman Truvell Wilson said, “during that second block of when we had games canceled because of other team’s [coronavirus] protocols, there was the sense that this might be it and there is a possibility we might not play again.”

VMI, on the other hand, didn’t have the same issues JMU did in regard to regular-season postponements and cancellations. Ahead of this spring, the Keydets just had never earned a trip to the playoffs before.

This is their first winning season since 1981.

“When you go through a lot of losing times, it’s hard to keep a level head and stick with your goals that you came here for,” Keydets junior wide receiver Jakob Herres said. “So, I think it’s a credit to the coaches and my teammates for sticking together and believing. And for it to come together as a whole this year, it’s an amazing thing to be part of.”

So, third-seeded JMU (5-0) welcomes Southern Conference champion VMI (6-1) to Bridgeforth Stadium today for a 2 p.m. first-round playoff game, in which both teams are thrilled to be part of the national stage.

Sure, the Dukes, an at-large choice out of the Colonial Athletic Association, were a bit miffed when the bracket was revealed Sunday to be given the No. 3-seed when they’ve been No.1 in the polls for most of this spring. But they’ll take the opportunity.

“We really haven’t earned that respect to maybe get some of the things that people think we could’ve gotten,” second-year JMU coach Curt Cignetti said. “But it doesn’t really matter. What matters now is there are 16 teams in the playoffs all competing for the right to say at the end of the season that they are the champion. And to do that, you’ve got to take care of today and every weekend, and so that’s the focus right now.”

JMU is making its 17th overall and seventh straight appearance in the postseason, and is hoping this is the beginning of a run to Frisco, Texas – the site of the FCS national title game – for the fourth time in five seasons.

In spite of all the stops and starts, Cignetti and company haven’t forgotten their ultimate objective.

“And honestly, that was the motivating factor keeping us focused, keeping us goal-oriented and not having people check out [during the long layoffs]. In a season like this one, it would’ve been easy for people to check out and say, ‘I’m done, let’s get ready for the fall.’ But having the national championship goal in mind, it kept people focused, motivated and driven.”

Cignetti said he believes his players can benefit from all the postseason experience they have against the Keydets, who have none.

“Being there before always matters,” Cignetti said, “because the second time you do something you learn from the first time, so I guess at the end of the day, it probably does matter.”

VMI coach Scott Wachenheim said he’s more concerned about the high level of talent JMU has on its roster than his squad’s lack of exposure to postseason football.

“I don’t think the intensity or nature of the game will be any different,” Wachenheim said. “The Citadel game, being a rivalry game, is intense and players get psyched up for that, so I don’t feel like it’s any more or less pressure than any other game. That’s why I think our lack of playoff experience doesn’t matter.”

“Plus, it’s the shortest road trip we’ve had all year,” he said as he started to grin. “We’re going to go up to Staunton to stay in a hotel for two nights and for a VMI Keydet, are you kidding me? Air conditioning? Hotel meals? We’re not going to Crozet to eat? We got maid service. We don’t have to march at 7 a.m.? This is a pleasure trip.”

The Coaches: Wachenheim, a former assistant in the NFL with the Washington Football Team as well as in the FBS with Virginia, is in his sixth season at the helm of the Keydets.

He’s 17-46 in his current post, but made drastic changes on the heels of their 0-11 2017 season. He switched offenses, installing the air raid to differentiate what his program was doing compared to the rest of the SoCon, which is a run-heavy, primarily-option league. Wachenheim altered his recruiting tactics, too, and in doing so led VMI to its first SoCon championship since 1977.

The Quarterbacks: VMI has maintained its success this spring despite having to turn its offense over to freshman quarterback Seth Morgan.

Morgan replaced senior signal-caller Reece Udinkski, the school’s all-time leading passer, last month after Udinski suffered a season-ending injury. Morgan has filled in flawlessly, completing 76 percent of his throws for 1,088 yards and eight touchdowns compared to only one interception while thriving in VMI’s air raid offense.

“He has a lot of moxie, you know,” Wachenheim said. “He energizes his teammates, but he’s calm out there on the football field. We always knew he had a strong arm. We always knew he could run the ball a little bit, but what we didn’t is how good of a decision-maker he would be under pressure and we didn’t know how accurate a passer he would be in a live game situation.”

Cignetti said: “Some guys have a hard time completing 76 percent of their passes on air, so he’s pretty good.”

JMU senior quarterback Cole Johnson used a 31-yard touchdown run in the fourth quarter against Richmond to put the game away last Saturday. He’s shown drastic improvements in the last two games, while completing 68 percent of his throws against William & Mary and Richmond for 455 yards and a touchdown without an interception.

Johnson, in addition to JMU was also recruited by VMI, where his brother played for four seasons.

Series History: Though the two schools are separated by only 57 miles, JMU and VMI have only met 13 times before and the Dukes hold a 10-3 edge in the series. The last time the Dukes and the Keydets played came in 2009, which was a 44-16 win for JMU.

The Keydets boast the nation’s ninth-best passing offense while averaging 312.7 yards through the air a game.

“This one is a little different in terms of the way they spread you out and the amount of throws and fast tempo they play with,” Cignetti said, “and then the dead-look cadence and different things like that. We usually do go into games with multiple packages. We’ll go into this game I’m sure with multiple packages against them, but we’re going to have to do a good job up front of pressuring the quarterback and really have great coverage and tackle well.”

Herres isn’t the only weapon, though, as six Keydets have caught at least one touchdown pass and four have rushed for at least one score. Running back Korey Bridy has four rushing touchdowns and a receiving touchdown.

“All of our receivers have the ability to have a breakaway game,” Herres said. “I’ve been the main target, but it’s a good balance we have. And we have really good running backs. Seth took over at quarterback and he’s been amazing, and I think everything blends together with how our receivers are and how everyone has to respect the pass and we’re still able to pass the ball.”

Defensive Disruptors: For the Dukes to slow down VMI’s offense, they must get to Morgan, according to Cignetti.

And there hasn’t been a better defensive player on the field when JMU has played this spring than senior defensive lineman Mike Greene. He’s a Buck Buchanan Award finalist and has racked up 15 tackles, eight tackles for loss, 2.5 sacks, two quarterback hurries and two pass breakups.

“A disruptor,” Wachenheim said of Greene. “He can take you fully out of your game plan.”

VMI has a standout on defense, too, in linebacker Stone Synder, who has 76 tackles, 9.5 tackles for loss and eight sacks.

Familiar Faces: JMU slot receiver Kris Thornton starred with the Keydets before transferring to join the Dukes. He was an All-SoCon performer with VMI in 2018 before sitting out last season and earning All-CAA honors this spring.

“We have a lot of love for Kris,” Herres said. “He was obviously one of our best players when he was here, but I’ve talked to him a few times since, and it’s all love and I’m just really excited to see he’s having success and he’s rebounded after leaving here.”

VMI freshman running back Grant Swinehart is a product of Turner Ashby High School in Bridgewater, and has 65 rushing yards and two scores on 21 carries in his first college season.

VMI strength coach Dave Forman is a JMU alum and played linebacker for the Dukes.

Don’t Be Surprised If: The Dukes show off their three-tight end sets and two-tight end, one-fullback sets in order to run the ball well and keep time of possession in their favor to give their defense a breather between series against VMI’s up-tempo offense.

Senior tight end Clayton Cheatham has had a solid spring, blocking and catching nine passes for 111 yards and a touchdown.

What’s Next: The winner of today’s tilt between the Dukes and the Keydets advances to face the winner of Missouri State-North Dakota, which kicks off at 4 p.m. this afternoon in Grand Forks, N.D.