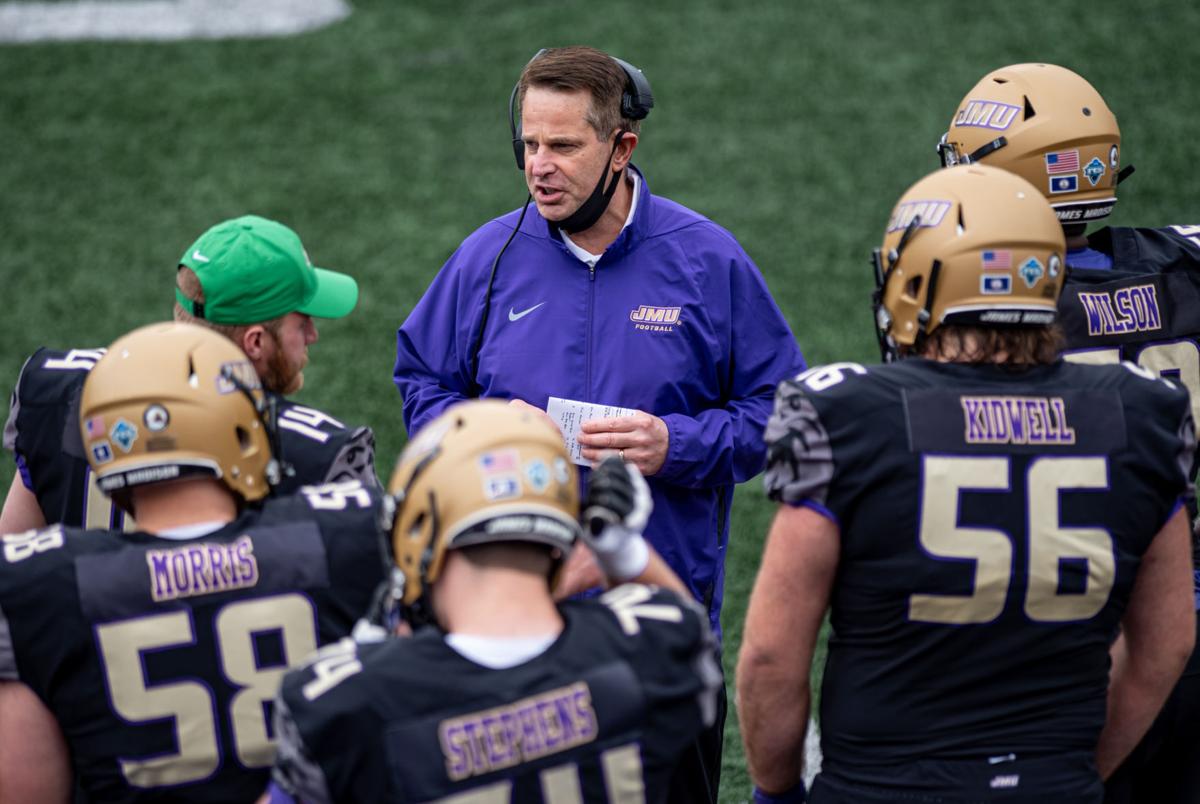 James Madison coach Curt Cignetti talks with players during the Dukes’ win over Richmond in April at Bridgeforth Stadium. 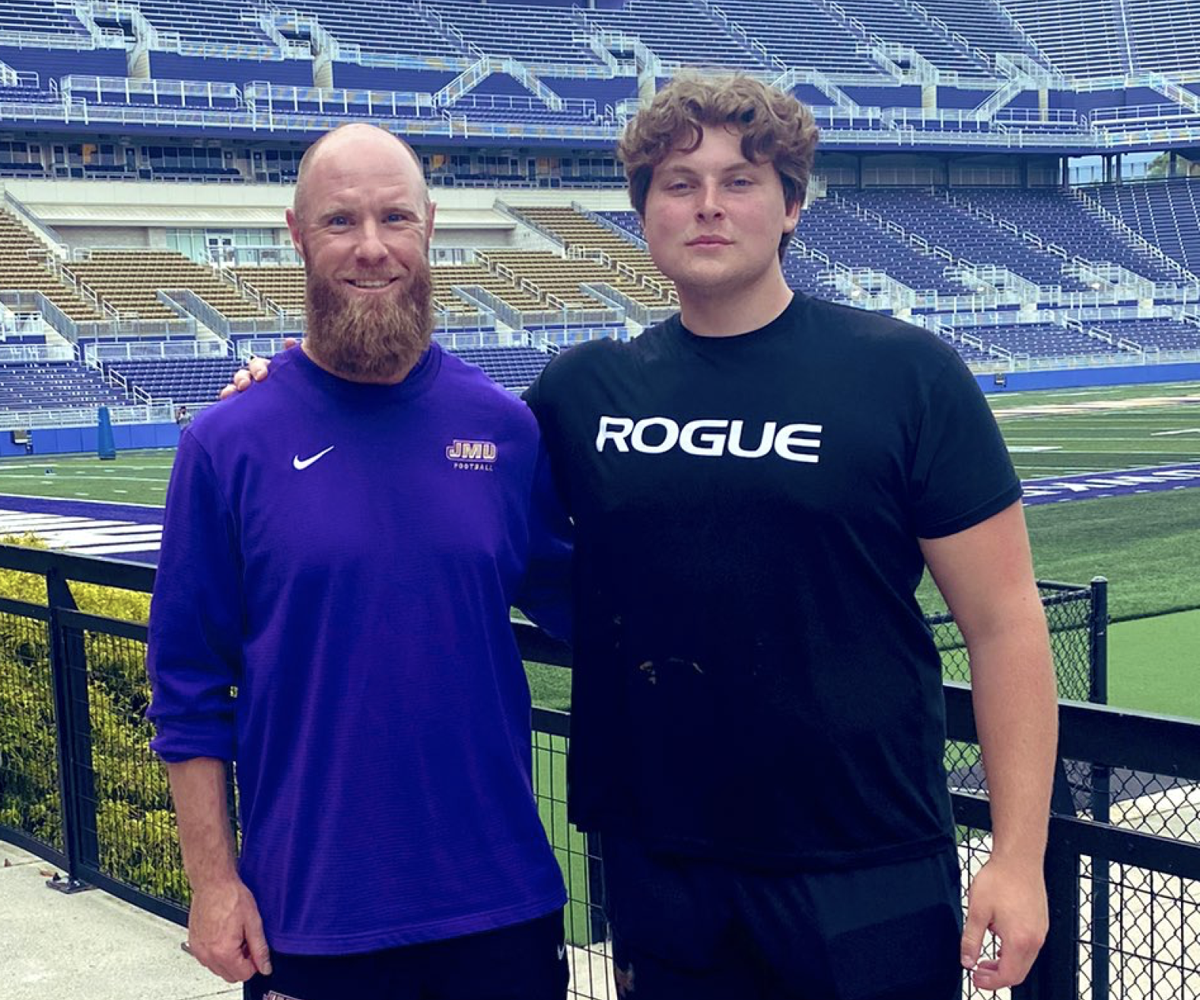 James Madison coach Curt Cignetti talks with players during the Dukes’ win over Richmond in April at Bridgeforth Stadium.

They’re taking long car rides or, perhaps, even a flight or two one day after the next in order to only increase their odds.

“It’s hectic,” Hidden Valley (Roanoke) linebacker Ashton Carroll, a three-star recruit by Rivals.com, said, “but it’s worth it because you could be spending the next four years of your life at this campus.”

Carroll and most prospects in the recruiting class of 2022 have been in fast pursuit of coveted scholarship offers since the beginning of the month. They’re taking advantage of invites to various schools and making their way from one potential future destination to another – for unofficial visits, one-day camps and private workouts – with the hope of earning an offer.

That’s something they couldn’t do as recently as last month. But when the longest dead period in the sport’s history ended on June 1, coaches and prospects alike quickly ditched the Zoom calls and text messages for in-person interaction.

“It’s a lot of fun,” The Hun School (Princeton, N.J.) offensive lineman Greyson Brockriede said. “You get that personal attention with the coaches when you’re able to talk to them face to face. Sometimes when you FaceTime, that just doesn’t do it, but when you actually get to shake the dude’s hand in person that’s a lot better than dealing with the phone stuff.”

Brockriede visited James Madison, Holy Cross and Liberty this past week, and will visit North Carolina, Duke and Elon this weekend before returning to Harrisonburg next week for a one-day camp at JMU.

Carroll said he’s heard from the Dukes, too, and hopes to visit them or participate in a camp at JMU this summer. His lead recruiter, he said, is linebackers coach Bryant Haines and he is a good friend of current JMU freshman tight end Kelly Mitchell, another Hidden Valley alum. Carroll already has seen Virginia Tech and Ball State, and has other trips planned for the coming weeks to North Carolina, South Carolina, Virginia and Wake Forest.

“I like where we’re at,” third-year JMU coach Curt Cignetti said about the Dukes’ progress in this recruiting cycle. He said his staff had to expedite the film evaluation of prospects in the 2022 class over the last few weeks, because JMU played so deep into the FCS spring season and coaches were concentrated on game planning all the way through the semifinals of the playoffs last month.

“We’ve identified and evaluated, so we’ve got a pretty comprehensive list and pecking order,” Cignetti said. “But that’s one step of the process, and now we’ll select guys we want to invite in for one-on-one visits, and then the camps are big.”

There are a few factors, according to Cignetti, about why the camps have a lot riding on the line for these prospects.

“It’s huge because there are quite a few kids and a lot of good players on tape,” Cignetti said. “So, for a lot of kids, they have to come to camp to earn the offer or move themselves up the recruiting board.

“And what’s interesting about this particular season is like in Virginia, most of the kids played in the spring and a few played in the fall. But in Maryland, a lot of high schools only played two games and some schools played no games, so with some guys in Maryland, you’re still looking at their sophomore tape.”

Essentially, coaches will use camps to verify with their own eyes what they’ve seen on limited film (because the prospects had drastically-altered junior years) and try to further scout all the nuances they couldn’t see on the player’s tape, but might’ve been able to notice if they attended a game or practice to watch the player.

Additionally, they will be able to compare and contrast a prospect from Maryland to one from New Jersey or Virginia or North Carolina to see how the structure of varied junior years impacted the development of each player.

They’ll also use the time, whether during a camp or unofficial visit, to get to know prospects prior to offering them, which is something coaches haven’t been able to do in person with this class until this month. And they are prioritizing that aspect of the process.

Take Brockriede’s first check-in with JMU for example. It happened because his lead recruiter, Dukes’ defensive coordinator Corey Hetherman, noticed Brockriede was in the area.

“So, me and my parents were actually driving down to Liberty for their camp and when we were on the highway, the [JMU] stadium just pops up,” Brockriede explained. “We were like, ‘Whoa’ so we made a little pitstop, because we wanted to see it anyway. But we took a picture and I put it on Twitter, and Coach Hetherman texted me saying, ‘You should’ve texted me that you were on campus.’ I hadn’t even thought about it, so after Liberty, we came back up and Coach Hetherman showed me around campus and the facilities. It was really cool.”

Brockriede, who has one scholarship offer from Missouri State and will also visit the Bears later this summer, said he’s hearing from Monmouth and JMU most frequently, “but if I’m going to earn an offer [from JMU], it’s likely going to be through their camp.”

Brockriede and Carroll said they know they have to perform for coaches in order to land the offer they desire. Carroll, a Virginia High School League All-Region 3D choice, holds offers from Army, Ball State and Navy. Carroll said Ball State is recruiting him intensely.

“I would say that to showcase my speed, height and flexibility,” Carroll said, “I think that is a big thing, and to be in front of coaches, so they can put their eyes on you.”

Cignetti said schools could be deliberate about who to offer, too, because some programs are still figuring out how to manage their rosters in the coming years.

“So, I think you’ll see teams across the board be more patient,” Cignetti said. “I think I read somewhere that there’s 75 percent less commitments now than there was this time last year. But it’ll work itself out at the end of the day.”

The Dukes don’t have any verbal pledges yet, but they also don’t have many scholarship offers out. Cignetti and his staff are detailed in their decision regarding whether or not to offer a prospect.

He said he’s looking at hauling in a class of about 15 or 16 players and would like to take a player at every position including quarterback and up to three on the offensive line as well a couple of wide receivers and cornerbacks.