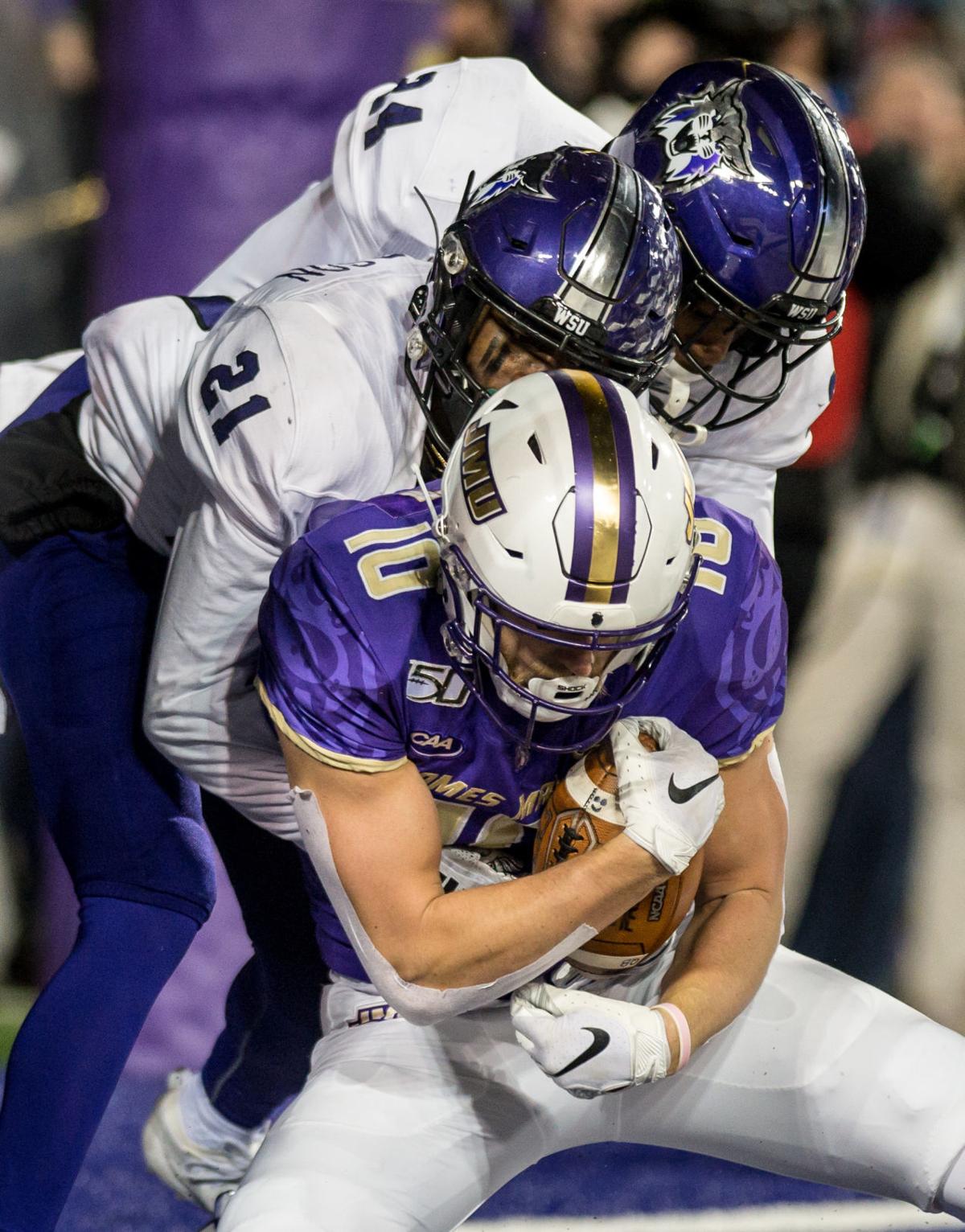 James Madison wide receiver Riley Stapleton (10) secures a touchdown catch on a Hail Mary pass as Weber State cornerbacks Maxwell Anderson (21) and Ja’Kobe Harris (24) try to rip the ball away as the clock expires at the end of the first half during the Dukes’ win over the Wildcats earlier this month at Bridgeforth Stadium. 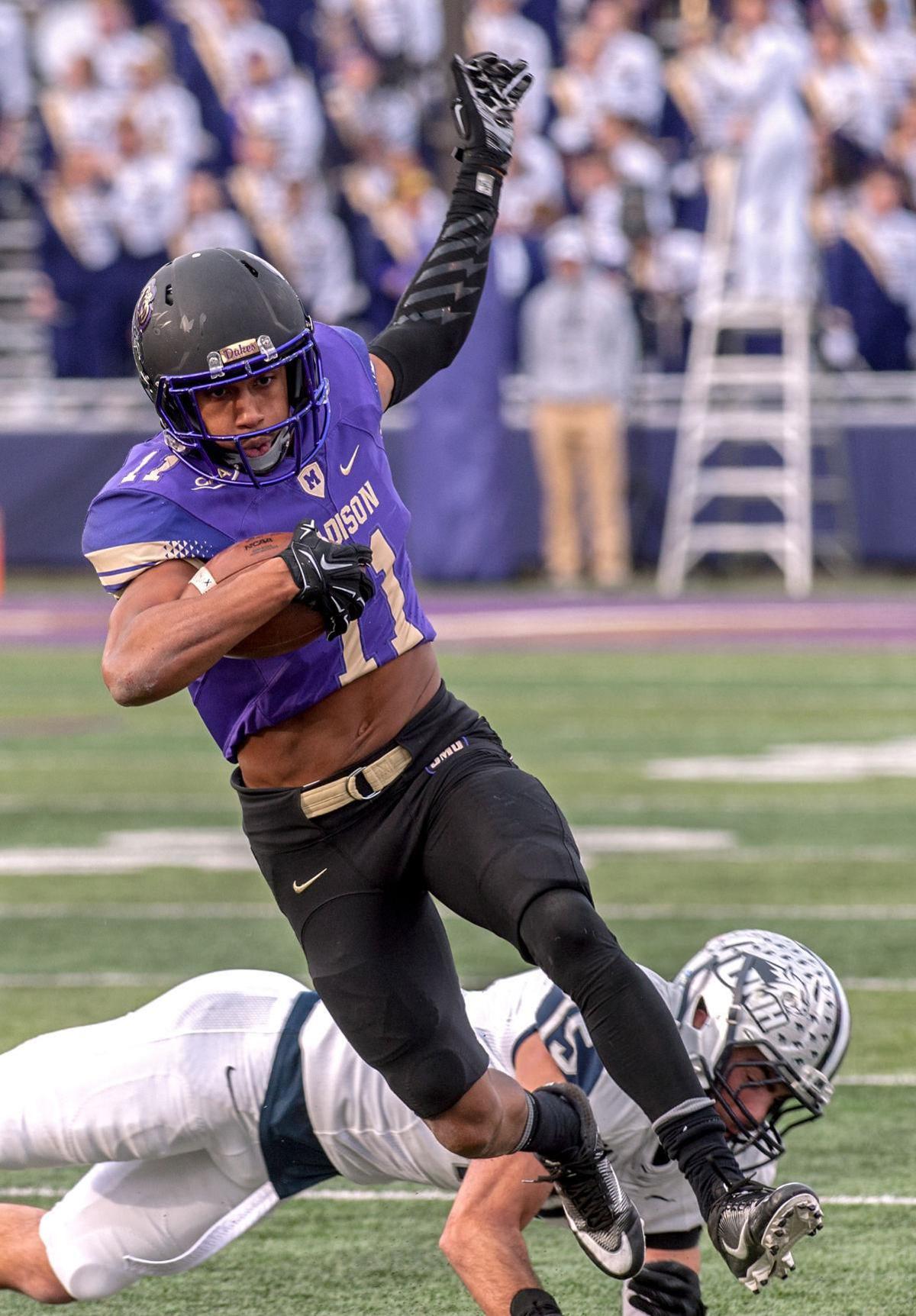 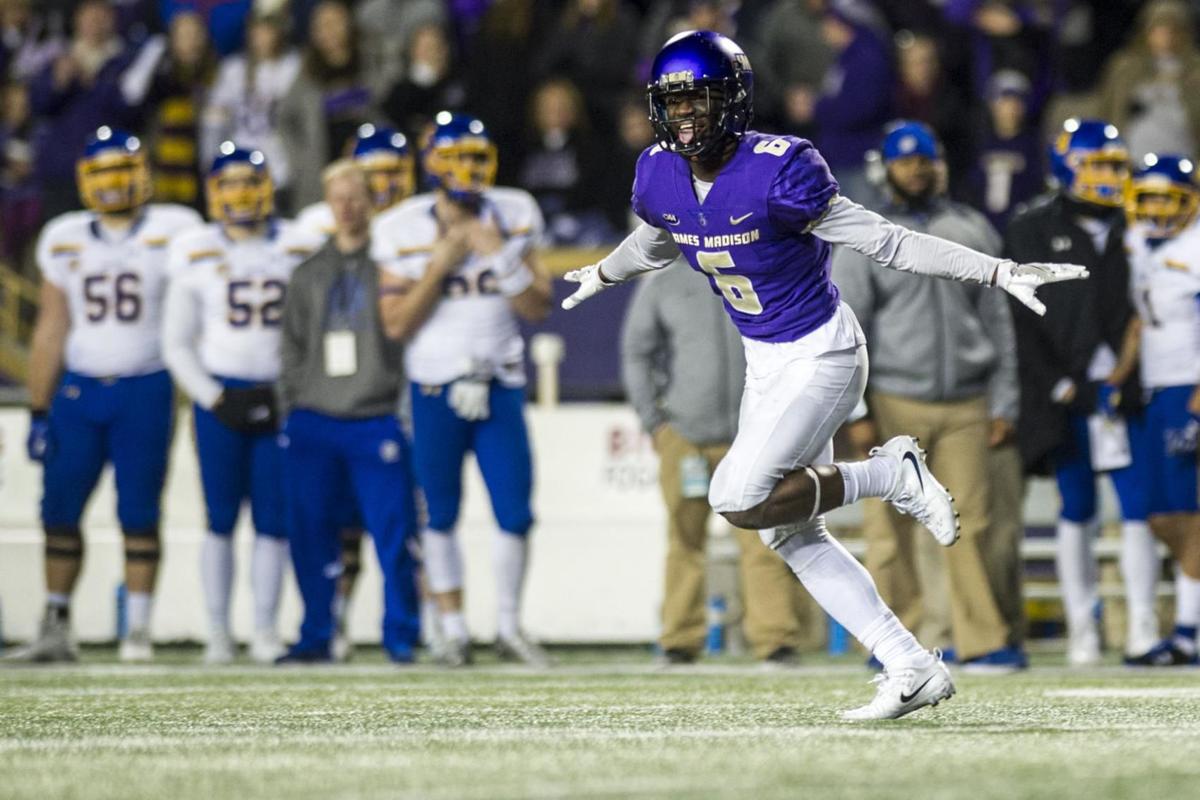 James Madison wide receiver Riley Stapleton (10) secures a touchdown catch on a Hail Mary pass as Weber State cornerbacks Maxwell Anderson (21) and Ja’Kobe Harris (24) try to rip the ball away as the clock expires at the end of the first half during the Dukes’ win over the Wildcats earlier this month at Bridgeforth Stadium.

This decade of James Madison football ended with a performance the Dukes had gotten a taste of before.

Wide receiver Riley Stapleton repeated history, pairing his name with two of the best individual efforts in any game over the last 10 years for the program.

His 162 receiving yards and two touchdowns helped JMU knock off Weber State 30-14 in the FCS national semifinals on Dec. 21 to send the Dukes onto the national championship game to play their first contest of the new decade. They’ll meet North Dakota State for the crown then in Frisco, Texas on Jan. 11.

Stapleton had a similar performance against the Wildcats in the 2017 national quarterfinals.

“We should give him a scholarship as well,” Weber State coach Jay Hill said after the semifinal. “He’s had two humongous games against us.”

But how does Stapleton’s two showings against Weber State stack up to other single-game standouts for the Dukes since the start of the 2010 campaign? The Daily News-Record ranked the top 15 individual performances of the decade.

To beat the FBS Mustangs, JMU needed every yard and touchdown former quarterback Vad Lee was responsible for.

Seventeen other signal-callers all-time have thrown for and rushed for at least 200 yards each in the same game, but none of them amassed as many yards as Lee, who is the only FCS quarterback to do it against FBS competition.

“Once we got the run game going, some things in the passing game opened up for us,” Lee told reporters afterward.

His 565 yards of total offense is also a school single-game mark.

Lee had three passing touchdowns, two rushing scores and his 17-yard touchdown pass to former wide receiver John Miller with 27 seconds left was the difference in the contest.

The way former running back Cardon Johnson ran against East Carolina, no one would believe that the previous season ended prematurely when he busted his Achilles or that his 2017 season would come to a halt a few weeks later for the same reason.

But that night in Greenville, N.C., Johnson couldn’t be slowed while rushing for a career-best 265 yards and two touchdowns to lead the Dukes past the FBS Pirates 34-14.

“I just believed in my abilities when I came out here,” Johnson said in the aftermath of the victory. “I had to get a feel for game speed in my first game back in a while, but once I got in a rhythm, I started feeling comfortable and like my usual self.”

“I don’t know if I expected this,” former JMU coach Mike Houston said then. “But I couldn’t be happier or more proud of [Johnson] because as we were with him through the injury last year, the surgery and the rehab, you wondered if he was ever going to make it back.”

After JMU dismantled South Dakota State 51-16 in the 2017 national semifinals, former cornerback Jimmy Moreland said he had never experienced success in one game like he did against the Jackrabbits.

Moreland had three interceptions, with two in the opening quarter and one in the final frame that sent ex-South Dakota State quarterback Taryn Christion to the bench.

Throughout the contest, Moreland had one-on-one assignments against former South Dakota State All-American wide receiver Jake Wieneke. But that didn’t matter to the 5-foot-11 defender who’d eventually become JMU’s all-time leader for interceptions and a 2019 seventh-round draft pick of the Washington Redskins.

“I already knew what type of routes [Wieneke] loved to run,” Moreland said about the second of three interceptions. “He gave me one of his original moves, trying to fade me out and run the post and I knew he was going to do that. So I caught onto that and the quarterback threw it up. I made a diving catch.”

It’s not hard to remember this one, considering it happened less than two weeks ago, but Stapleton’s domination in one-on-one coverage gave quarterback Ben DiNucci a target every time he scanned the field to pass.

“You just go out there and hope your number is called,” Stapleton said. “And I was fortunate enough to have my number called.”

On eight of the nine occasions DiNucci completed a pass to Stapleton, the reception netted the Dukes a first down or a touchdown — including the 34-yard Hail Mary heave they connected on as time expired to end the first half and provide JMU a commanding 24-7 halftime advantage.

His touchdown runs of 87 yards and 65 yards to open the third quarter en route to 203 rushing yards for the evening helped the Dukes separate from the Jackrabbits as those scores turned a 21-10 edge into a 35-10 lead that would only grow larger.

“The thing that crushed us were the two long runs right out of the chute,” South Dakota State coach John Stiegelmeier said following his team’s loss.

The 203 rushing yards are the second most for any JMU rusher in school playoff history.

Stapleton’s breakout game came two years ago when he recorded eight catches for 189 yards and a touchdown against Weber State in the FCS quarterfinals.

His 40-yard touchdown catch from former quarterback Bryan Schor set up the game-tying 2-point conversion with 2:08 left and then Stapleton had catches of 17 yards and 9 yards on the final drive to set up a game-winning field goal from kicker Ethan Ratke.

The 189 receiving yards are the second most for any JMU receiver all-time.

He completed only five passes and averaged just 2.9 yards per rush, but former quarterback Drew Dudzik, who later in the decade would join Houston’s coaching staff, accounted for all three of JMU’s touchdowns in the Dukes’ stunning 21-16 upset of FBS No. 13 Virginia Tech.

It was just the second win ever for an FCS program over a ranked FBS squad.

Dudzik’s 12-yard run for a touchdown on an option keeper with 13:45 to play was the game-winning score and his swing pass to running back Jamal Sullivan turned into a 77-yard touchdown, which still stands as the ninth-longest touchdown pass ever for JMU.

No one has had more all-purpose yards in a playoff game for the Dukes than former wide receiver Brandon Ravenel, who tallied 155 receiving yards, 108 return yards and three total touchdowns in JMU’s 55-22 win over New Hampshire in the 2016 FCS playoffs.

Ravenel had receiving touchdowns of 37 and 19 yards, and a kickoff-return score of 86 yards in the Dukes’ win as he accounted for 263 all-purpose yards.

The six touchdowns Lee was responsible for against Charlotte is a school record for a single game.

Four scores came through the air and the two others came on the ground as Lee registered 404 total yards of offense in the 48-40 win for the Dukes.

In a span of two minutes and 10 seconds, punt returner D’Angelo Amos had the performance of his career in JMU’s 37-0 victory at Villanova.

On consecutive punt-return attempts, Amos notched touchdowns of 89 yards and 81 yards to demoralize the Wildcats and claim the win.

“Just a little bit [tired],” Amos said with a laugh afterward about returning the second of two straight punts for scores.

His 183 punt-return yards for the game tied Gary Clark, who had 183 against Virginia in 1983, for the school single-game record.

There was nothing William & Mary could do to keep Dukes defensive end Ron’Dell Carter out of the backfield.

Carter had 10 tackles, to go along with six tackles for loss, and a sack in JMU’s 38-10 pummeling of William & Mary earlier this season.

Ravenel needed someone to throw him the ball efficiently in that 2016 playoff win over New Hampshire, and Schor did.

The five touchdown passes Schor threw are tied with the two others times he did it (vs. East Tennessee State in 2017 and against Rhode Island in 2016), Lee’s five against Towson in 2015 and former quarterback Michael Birdsong’s five in 2013 for the most touchdown passes in a single game in JMU history.

The eventual Colonial Athletic Association Defensive Rookie of the Year in 2010, linebacker Stephon Robertson played like it in that memorable triumph in Blacksburg.

Robertson had a game-high 13 tackles to go along with a tackle for loss and a forced fumble that halted the Hokies’ last attempt at survival.

On a second-and-1 at the JMU 11-yard line with 5:32 to play, Virginia Tech called for a handoff to running back Darren Evans, but Robertson tackled Evans, jarred the ball free and the Dukes recovered ending the Hokies’ final possession.

Villanova had all the momentum until defensive end John Daka’s forced fumble on a tackle for a loss of Wildcats running back TD Ayo-Durojaiye gave the Dukes an opportunity when they needed one.

From there, JMU would score the game’s final 21 points, rallying to beat previously unbeaten Villanova 38-24 in October.

Daka finished the game with nine tackles, five tackles for loss, two sacks, the forced fumble, a pass breakup and a quarterback hurry.

DiNucci was at his best in the second round of the postseason against Monmouth earlier this month.

He completed 21-of-25 passes (84 percent) for 273 yards and two scores and also rushed for 66 yards and two touchdowns while engineering an offense that wasn’t forced to punt at all against the Hawks.

His 21 completions went to six different receivers, with the highlight coming on a sidearm throw to wide receiver Jake Brown that resulted in a 21-yard touchdown.

“I just kind of flicked it,” DiNucci said about the crafty touchdown pass.