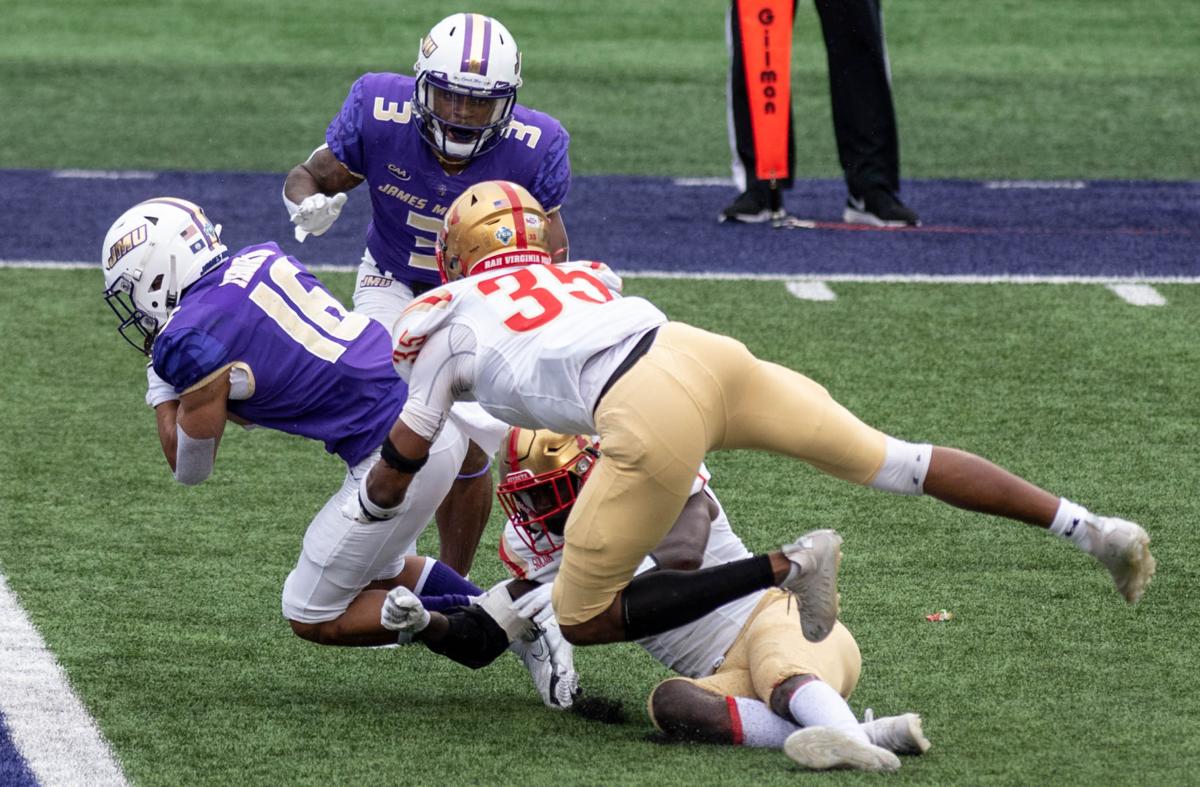 James Madison wide receiver Kris Thornton (16) dives toward the end zone to score during the Dukes’ win over VMI this past April in Harrisonburg. 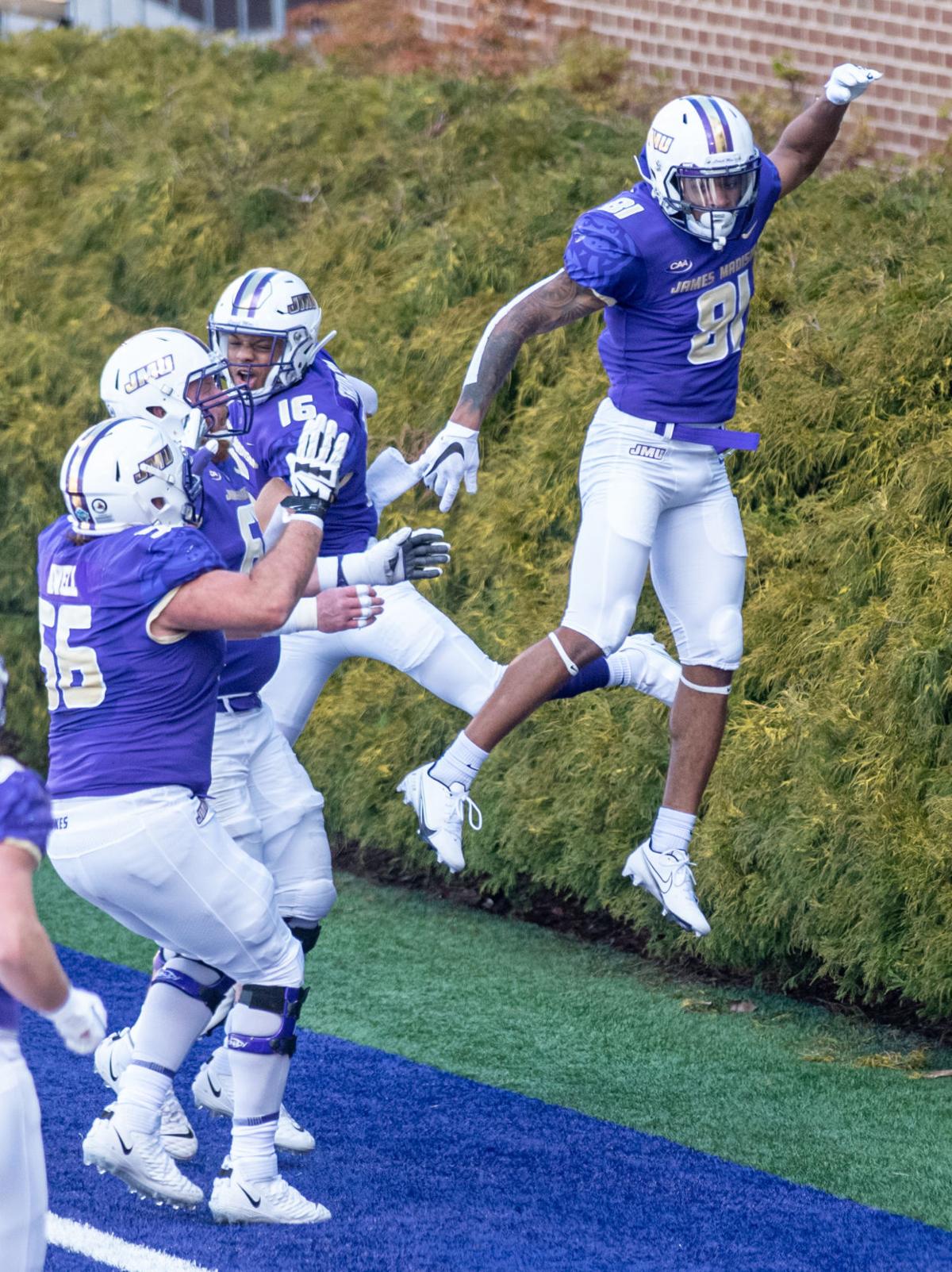 James Madison wide receiver Antwane Wells Jr. (81) celebrates after scoring a touchdown during the Dukes’ win over Robert Morris this past February.

James Madison wide receiver Kris Thornton (16) dives toward the end zone to score during the Dukes’ win over VMI this past April in Harrisonburg.

James Madison wide receiver Antwane Wells Jr. (81) celebrates after scoring a touchdown during the Dukes’ win over Robert Morris this past February.

There wasn’t another group on James Madison’s roster to go from completely unknown to impactful like the wide receivers were able to this past spring.

During the abbreviated campaign, in his first year with the program, Antwane Wells Jr. developed into the clear-cut No. 1-option for quarterback Cole Johnson to throw to while VMI transfer Kris Thornton and Duke transfer Scott Bracey became dependable every-down starters.

Those three pass-catchers are all back, giving Johnson, Dukes coach Curt Cignetti and wide receivers coach Mike Shanahan – who has also added the responsibility of offensive coordinator since last season – an experienced trio to work with.

This past February in the preseason ahead of the spring slate, Johnson was trying to win the starting quarterback job while Cignetti and Shanahan were only sorting through and evaluating the potential options they had to replace three departing starting wide receivers from the 2019 season.

So, here’s a closer look at Wells Jr., Thornton, Bracey and the rest of JMU’s wide receivers:

Synopsis: Wells Jr.’s back-to-back performances in the opening round and quarterfinals of the FCS postseason etched his name into JMU history forever.

His 132 receiving yards against VMI were the fourth most in a playoff game by a JMU receiver, and then he topped that effort the next week with 143 yards in the Dukes’ win over North Dakota. Four of his six touchdowns this past spring came in the playoffs.

“He thrives on competition,” Cignetti said of Wells Jr. after the victory against VMI. “Plus, he’s got good size, speed, twitch, explosiveness and good hands. He’s tough.”

The 6-foot-1 product of Highland Springs High School and Fork Union Military Academy transitioned with ease into the college game, and his success as a freshman should only give himself confidence as well as JMU hope about his potential in the coming years.

Add in that Wells Jr. and Johnson showed a growing chemistry the deeper the Dukes played into spring, they should propel forward as a pair to keep improving their connection this fall. That goes for Bracey and Thornton with Johnson, too.

Bracey made 14 catches, including one for a touchdown against Sam Houston, in his debut season with JMU after departing the Atlantic Coast Conference. His larger contribution came as an example for Wells Jr., though, Cignetti noted throughout the spring. Bracey was a needed veteran for the unit, and the projection for his role in his sixth season in college football is similar to the one he served in the spring – a possession receiver with a knack for moving the chains.

And if there was any question whether or not Thornton’s skills would translate from the Southern Conference – the league in which he had an 1,000-yard receiving season as a sophomore for VMI – to the Colonial Athletic Association, he answered it in the spring during his first season of eligibility with the Dukes. He was their starting slot receiver and registered 428 receiving yards. And with his speed, Thornton is unlikely to be anything but a great fit for JMU at that spot.

What is intriguing going forward about the three returning starters is how their production may or may not differ with their position coach, Shanahan, calling plays.

Where the group could become more valuable is in its depth if any of the second-string receivers become more consistent contributors.

Kyndel Dean and Josh Sims were starters earlier in their careers, and Devin Ravenel was viewed as someone who could help JMU as an inside or outside receiver before suffering an injury in the first game of the spring and missing the rest of the spring season. Dean had five receiving touchdowns in 2018, but he’s only had one since while settling into a backup role.

Keep an eye on Reggie Brown and newcomer Maxwell James, also. Brown, a redshirt sophomore and native of Florida, appeared in five games last season. James, from Lake Braddock High School, was a target of Shanahan’s in recruiting and had scholarship offers from 18 other programs.