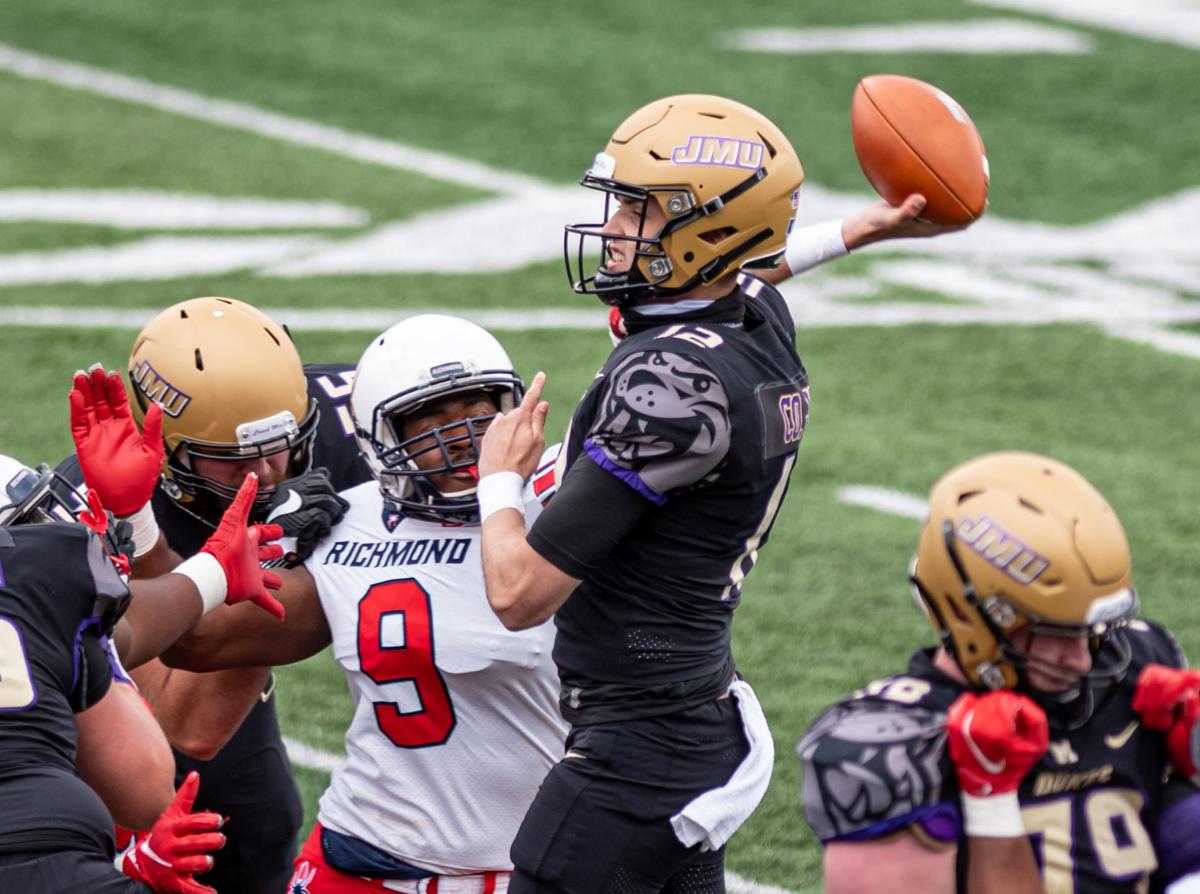 James Madison quarterback Cole Johnson (12) throws a pass through traffic during the Dukes’ win over Richmond on Saturday in Harrisonburg. 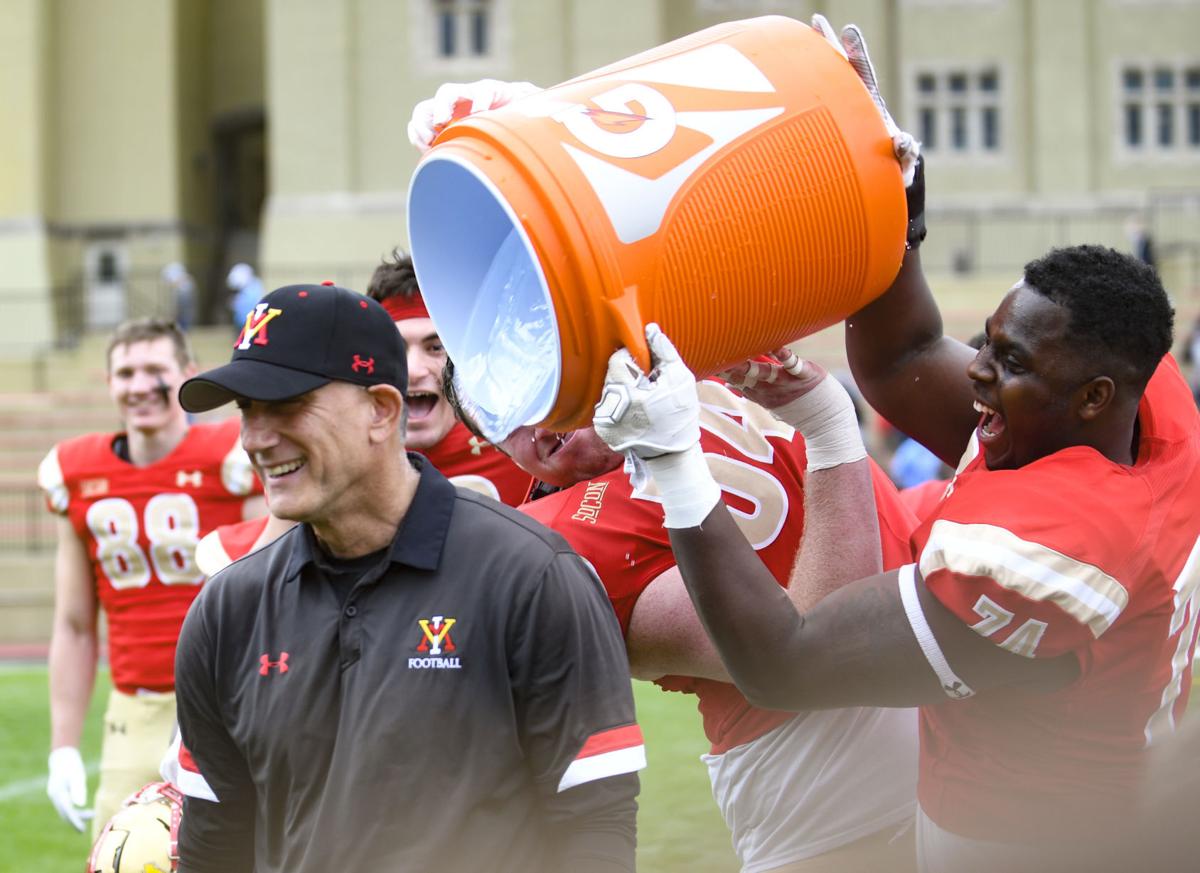 VMI coach Scott Wachenheim receives a celebratory bath from Marshall Gill (74) and Wesley Cline after the Keydets beat The Citadel on Saturday in Lexington. 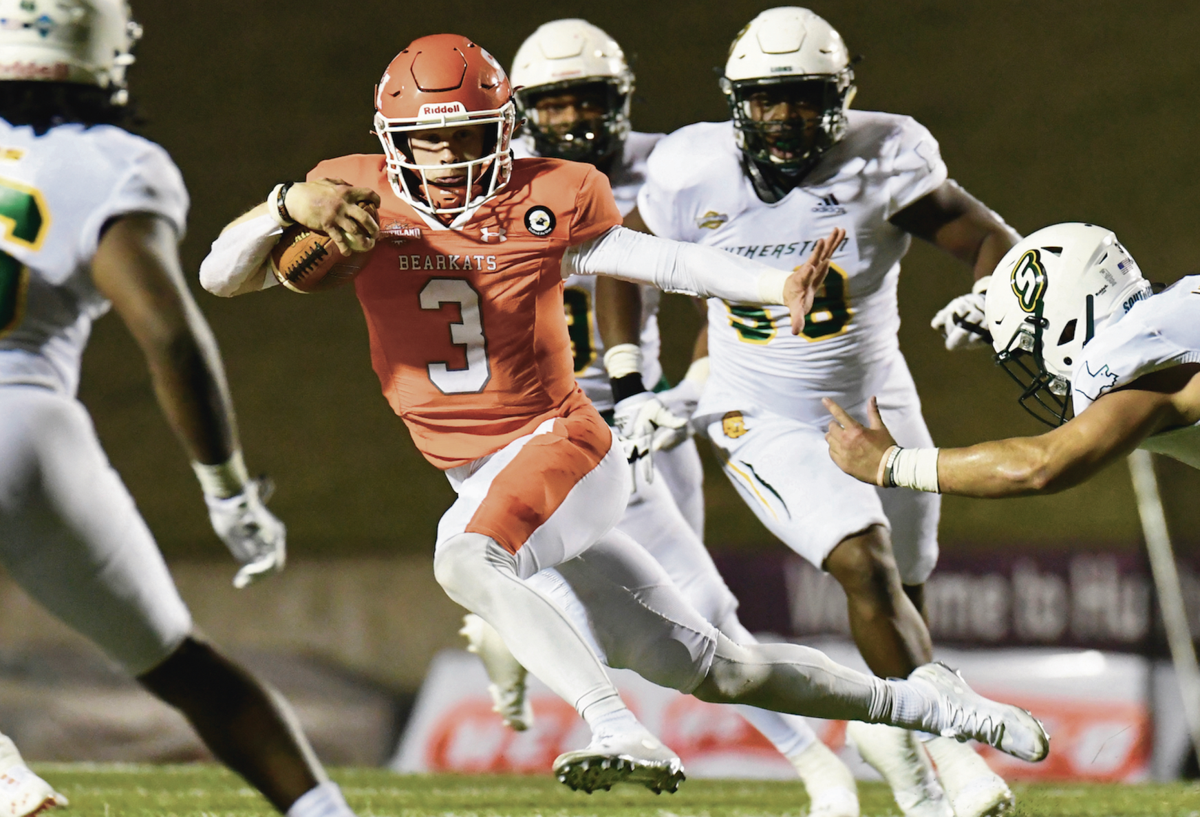 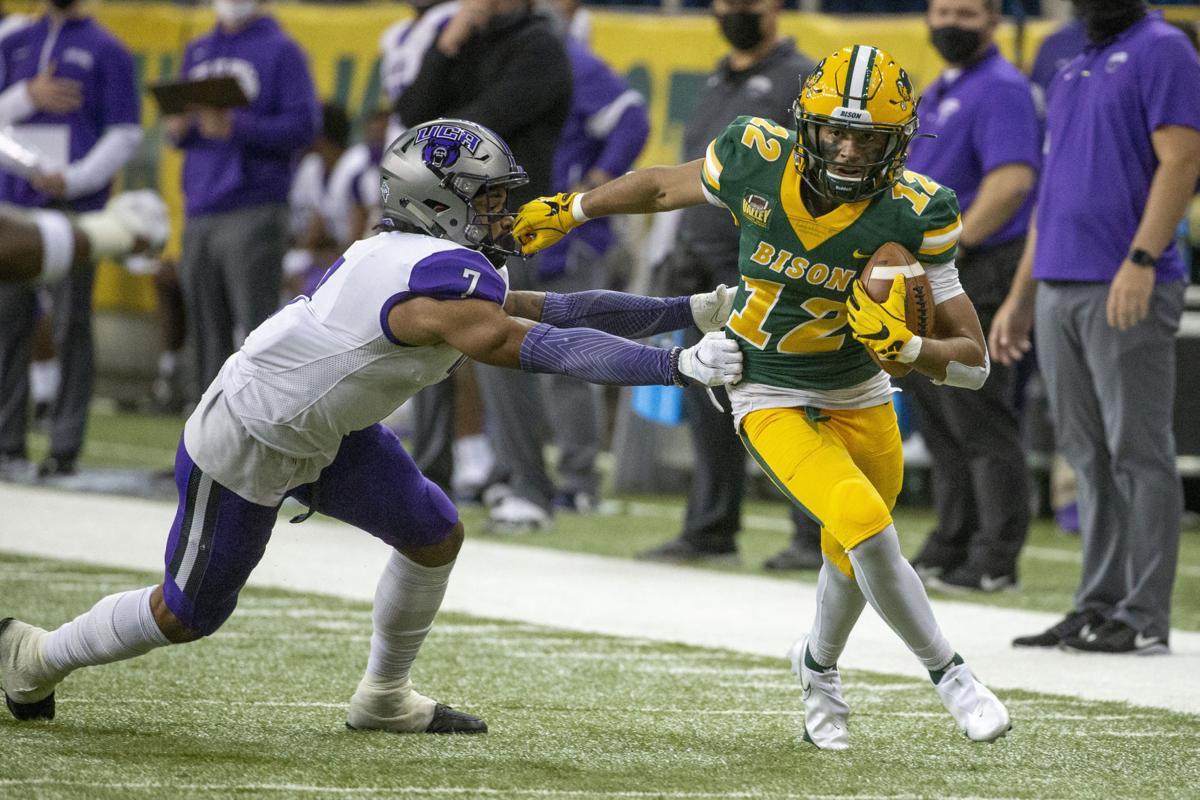 North Dakota State wide receiver Braylon Henderson (12) runs after a catch during a win over Central Arkansas this past fall in Fargo, N.D. 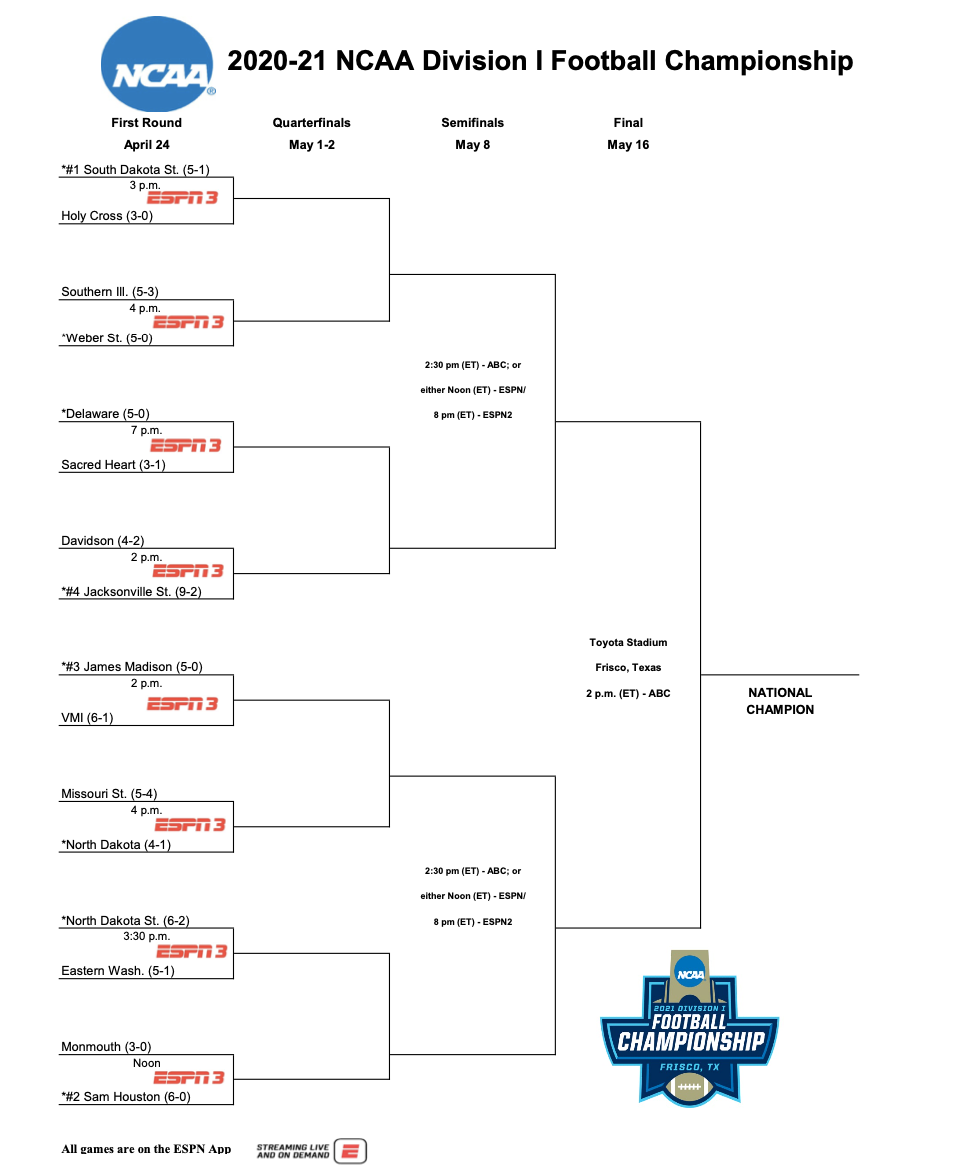 James Madison quarterback Cole Johnson (12) throws a pass through traffic during the Dukes’ win over Richmond on Saturday in Harrisonburg.

There are no easy outs in this half of the bracket.

If James Madison is going to return to Frisco, Texas, for the fourth time in five seasons, the Dukes will have to pass significant tests along the way.

All eight teams in this part of the field were ranked No. 12 or better in the final Stats Perform FCS Top 25 released on Monday.

There’s first-round opponent VMI, which is the best version of the Keydets in decades. Then as the tournament progresses, JMU could match up with Bobby Petrino’s Missouri State squad, a bunch much better than they were in the fall, or North Dakota, which some thought might be the best team in the country as recently as last month. Later on, potential semifinal opponents include defending champion North Dakota State or programs with high-powered offenses in Sam Houston State or Eastern Washington.

“You got to take care of business every single day,” JMU coach Curt Cignetti said. “You’ve got to prepare and you’ve got to practice well, no matter what round it is.”

The Dukes enter the playoffs playing the best they have all season. They combined to outscore rivals William & Mary and Richmond 61-16 in their last two games to claim the Colonial Athletic Association South Division title.

Though as Cignetti pointed out, the previous success doesn’t necessarily guarantee JMU more as it readies for increased competition in win-or-go-home scenarios.

“Momentum is a funny thing,” Cignetti said. “I think in games, there is definitely momentum, but momentum week to week, I’m not sure if that really exists because at the conclusion of every game there are a new set of challenges.”

Third-seeded JMU hosts VMI in the opening round on Saturday at 2 p.m. with the winner facing the winner of North Dakota-Missouri State. In the other pod, North Dakota State welcomes Eastern Washington to the FargoDome with the winner advancing to face either No. 2-seed Sam Houston State or Monmouth.

Here’s a closer look at the deep group of eight:

Synopsis: The Dukes changed some on offense between their third and fourth games – with Cignetti opting to focus more on football than social distancing – to put quarterback Cole Johnson in better position. The result: he’s been better and so has the team.

In victories at William & Mary and over Richmond to close the season, Johnson completed 68 percent of his passes for 455 yards and a touchdown without an interception. He also had a key fourth-quarter rushing score against the Spiders. In the first three games of the spring, he turned the ball over four times.

Synopsis: To differentiate itself from the rest of the Southern Conference a few years ago, VMI coach Scott Wachenheim turned to the air raid.

And this spring, the offense has proven difficult for any opposing defense to slow down. The Keydets are averaging 312 yards per game through the air while boasting the nation’s ninth-best passing offense. What’s more incredible is that they didn’t skip a beat when freshman quarterback Morgan stepped in for former senior starter Reece Udinski, who got hurt in late March. Udinski had thrown for 1,087 yards and seven touchdowns through four games. Morgan has thrown for 1,088 yards and eight touchdowns this spring.

The top target is 6-foot-4 Herres, an imposing threat who is third in the country for receiving yards and receiving touchdowns.

Synopsis: It’s a tale of two seasons for the Bears, who were 0-3 in the fall but surprised in the Missouri Valley Conference by rattling off five wins in six games this spring under first-year coach Petrino – the ex-Louisville coach who mentored Lamar Jackson during his Heisman Trophy-winning campaign.

From its three-game fall season to its six-game spring slate, Missouri State has upgraded its defense. In the fall, the Bears gave up 36 points per game, but this spring they’ve only yielded 19.3 points per contest. Defensive ends Kevin Ellis and Isaiah Sales are key reasons why MSU has completed such a drastic turnaround in a short period of time.

Synopsis: No one is probably as eager to play as the Fighting Hawks, who haven’t done so since their March 20 loss to North Dakota State. Coronavirus cancellations and opt outs in the MVC cost North Dakota the back half of its schedule.

Prior to falling in the FargoDome, UND was in the conversation for a seed for this FCS postseason. The Fighting Hawks have wins over top-seeded South Dakota State as well as Southern Illinois, which made the field of 16.

Their star is Weah, who at 5-foot-9, 195 pounds is a bowling ball of a running back and no picnic to tackle. He averages 114 yards on the ground per game and has seven rushing scores. He ran for 129 yards against North Dakota State and had 88 rushing yards and two rushing scores in the Fighting Hawks’ win over South Dakota State earlier this spring.

This is UND’s third playoff appearance in the last five seasons.

Synopsis: The post-Trey Lance era hasn’t been the smoothest for North Dakota State. Bison quarterback Zeb Noland, a former Iowa State transfer, is completing only 51 percent of his passes and has thrown six interceptions compared to five touchdowns. He also doesn’t run as well as Lance nor other former Bison signal-callers Easton Stick or Carson Wentz.

That’s altered NDSU on offense some, but the unit still has shown effectiveness at times this season like when fullback Luepke rushed for 190 yards and three scores to beat UND. The roster knows how to win in the playoffs, though, with Watson, Jensen, Hankey, Tutsie, defensive end Logan McCormick and offensive tackle Cordell Volson all having significant postseason experience under their belts.

The Bison have won eight of the last nine FCS national championships.

Eastern Washington enters the playoffs with the sixth-best scoring offense (40.7 points per game) and No. 1 total offense (562.5 yards per game) in the FCS this spring. Quarterback Barriere is one of the favorites for the Walter Payton Award as the nation’s top offensive player. He’s thrown for 2,193 yards and 18 touchdowns and rushed for another 135 yards this spring. In his career, he’s 21-8 as the Eagles’ starting signal-caller and he spreads the ball around well.

EWU has four receivers with at least 20 catches and 10 players who have caught at least one touchdown.

The explosive offense aided Eastern Washington in winning five straight after falling in its opener to Idaho. Had EWU lost any of the rest of its games, it might not have reached the postseason.

Synopsis: The Hawks didn’t start their season until March 27, and on April 10 they throttled Kennesaw State, 42-17, to win the Big South championship in what was a de facto conference title game.

The receiving duo of Moore IV and Greene Jr. give Monmouth two big-play threats in its spread offense for quarterback Muskett. Farri is no slouch either having rushed for 422 and nine touchdowns in only three games. Monmouth scored 125 points in three games, so its offense displayed no trouble in spite of the late start.

Monmouth is making its third straight FCS playoff appearance. The Hawks won a postseason game for the first time in 2019 by beating Holy Cross prior to falling to JMU in the second round.

Synopsis: This version of Keeler’s squad plays defense, too, and that’s a change from his earlier teams at Sam Houston State, which could always score but struggled to stop its opponents.

The Bearkats yielded only 18.8 points per game in the offensive-minded Southland Conference.

The offense is still good, too, putting up 45.4 points per game. Receiver Ezzard typically makes catches for long gains as he is second in the FCS with his 30.4 yards per reception. Sam Houston had a five-point win over Southeastern Louisiana in its first contest of the season, but since won games that weren’t very close to finish with an average margin of victory of 27.33 points per game.