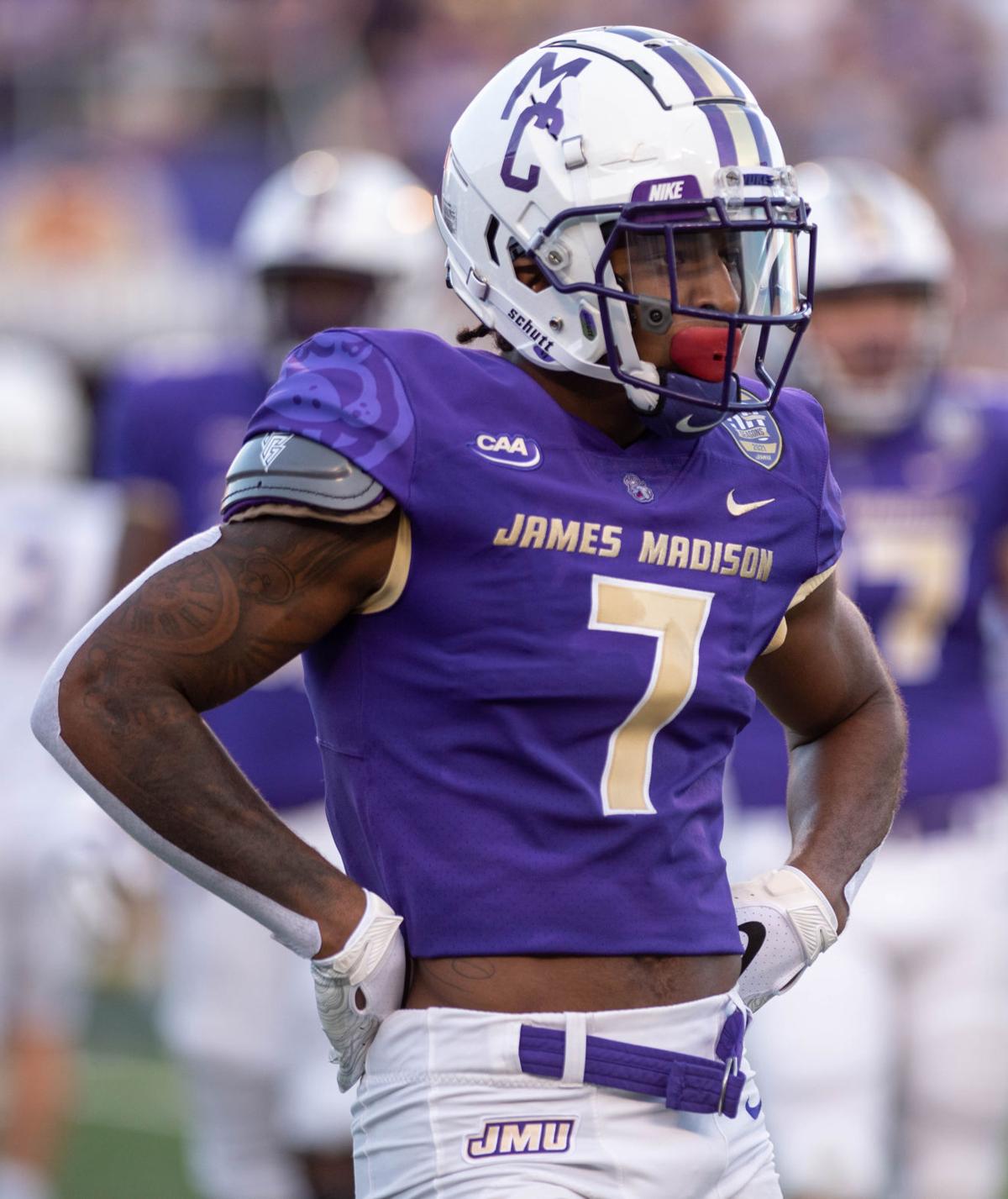 James Madison wide receiver Antwane Wells Jr. (7) reads the play call from the sideline during the Dukes’ win over Maine earlier this season in Harrisonburg. 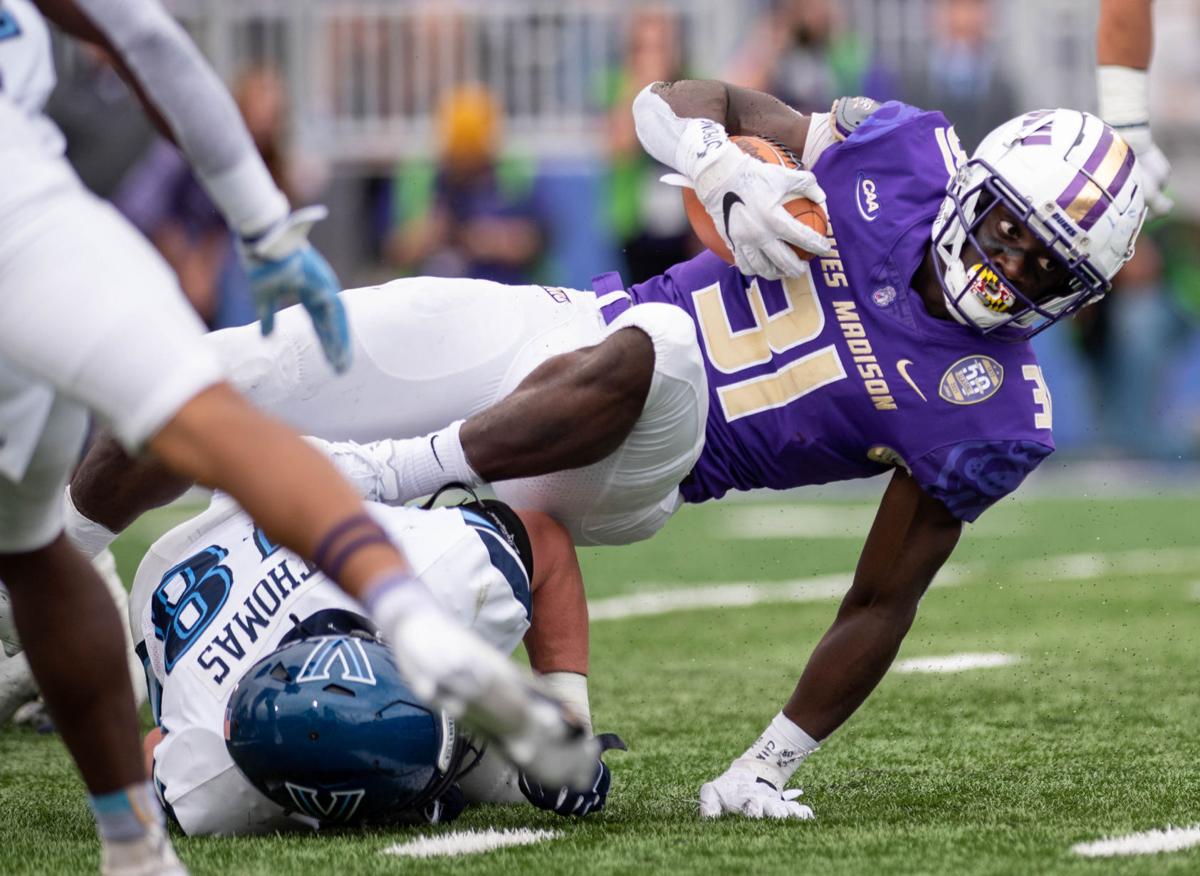 James Madison running back Percy Agyei-Obese (31) fights his way toward the end zone during the Dukes' loss to Villanova this past Saturday in Harrisonburg.

James Madison wide receiver Antwane Wells Jr. (7) reads the play call from the sideline during the Dukes’ win over Maine earlier this season in Harrisonburg.

James Madison running back Percy Agyei-Obese (31) fights his way toward the end zone during the Dukes' loss to Villanova this past Saturday in Harrisonburg.

Some of James Madison’s top players are healing and nearing their typical, high level of performance.

Though the Dukes fell this past Saturday to Villanova, they are encouraged for what’s to come – beginning with this Saturday’s 2 p.m. rivalry bout at Richmond – based on the production senior defensive tackle Mike Greene and senior running back Percy Agyei-Obese gave them against the Wildcats. Both All-Americans in previous seasons, Greene missed the first two weeks of this campaign with a back injury and Agyei-Obese was sidelined for the first three games with a hamstring problem.

“This was Mike’s best game since he’s been back,” third-year JMU coach Curt Cignetti said. “He’s starting to round back into form, getting into playing mode.”

Greene tallied a season-high eight tackles along with half a tackle for loss against Villanova. Only twice before Saturday had he hit the eight-tackle mark in his career – when he set a career-high for tackles with nine in JMU’s 2019 win at Stony Brook and the Dukes’ 2018 playoff loss at Colgate.

He said it was frustrating to experience the back issue so close to the start of the season.

“It was hard coming back from it,” Greene said. “It wasn’t that crazy of an injury, but I had to take my time with it to make sure it didn’t get worse, so getting back slowly, it was hard. But I think I’m getting back to where I was.”

The 6-foot-3, 282-pounder, who has shifted to his natural position at defensive tackle after playing defensive end this past spring, made his season debut in the Dukes’ win at Weber State on Sept. 18. He worked into the defensive line rotation then before taking more steady reps in each of the last two weeks.

Additionally, Dukes freshman defensive tackle James Carpenter, who missed games at Weber State and at New Hampshire, returned this past weekend against Villanova, too. He had three tackles and half a tackle for loss.

“Both [Greene] and James Carpenter were our players of the game on defense,” Cignetti said, “and you know, Mike really played hard and dominated throughout.”

The week before at New Hampshire, JMU eased Agyei-Obese in with only six carries even though three of them came on the Dukes’ game-winning drive in the fourth quarter.

“I definitely feel like the last two games have helped me progress,” Agyei-Obese said, “and I do feel myself progressing to where I was at and am getting the touch back.”

He said it does take time for a running back to play with a new group of offensive linemen, and he’s only had the two weeks to work with those five. The Dukes are starting three freshmen up front, but right guard Cole Potts did start throughout most of the spring with senior center J.T. Timming and sophomore right tackle Nick Kidwell, who are all in the same spots now blocking in front of Agyei-Obese.

Also on offense, Cignetti said, freshman wide receiver Antwane Wells Jr. sprained his ankle against Weber State and has been playing through the injury since. Wells Jr. hauled in five touchdown receptions through the first three games, but hasn’t found the end zone in either of the last two contests.

“We didn’t know if Antwane was going to play against New Hampshire,” Cignetti explained, “probably didn’t have a feeling he was going to play until Friday night before the game. I still don’t think he was 100 percent. Well, I know he wasn’t. But he played and made some catches for us, and last week he still wasn’t quite 100 percent.

“Now, they matched up [Benford] on him throughout the entire game and he had an opportunity to make a couple of plays and they were tough catches deep. He did make some other catches, some critical catches in the fourth quarter, so every week he’s getting closer to being 100 percent.”

A few others to keep an eye are senior safety MJ Hampton and senior offensive tackle Liam Fornadel. Hampton (foot) played this past weekend for the first time this season in a special teams role and Fornadel (knee), according to Cignetti, could return before the end of the season.