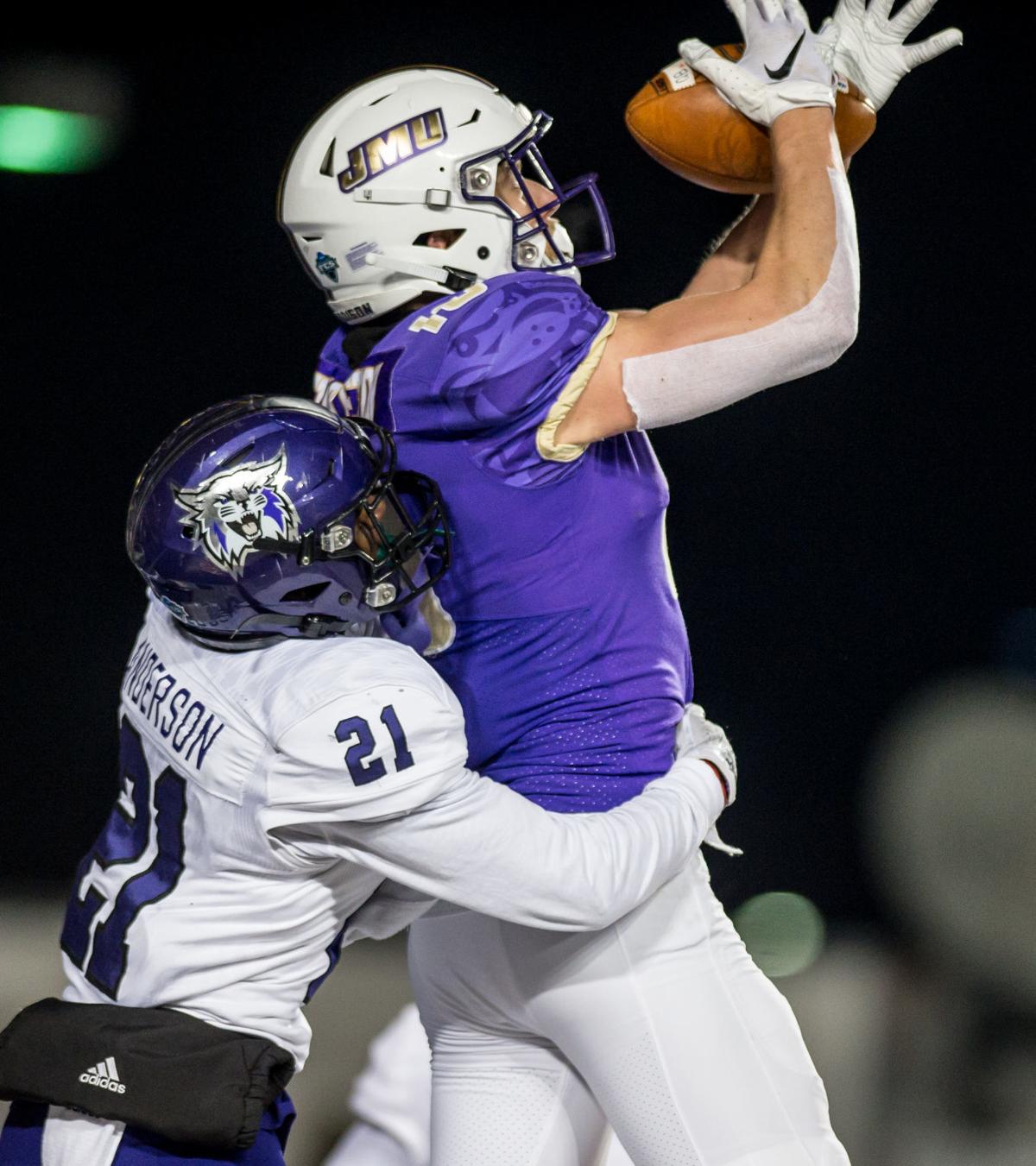 James Madison wide receiver Riley Stapleton (10) catches a Hail Mary pass for a touchdown by leaping over Weber State cornerback Maxwell Anderson (21) as the clock expires at the end of the first half during the Dukes' 30-14 win over the Wildcats in the semifinals of the FCS playoffs on Saturday. 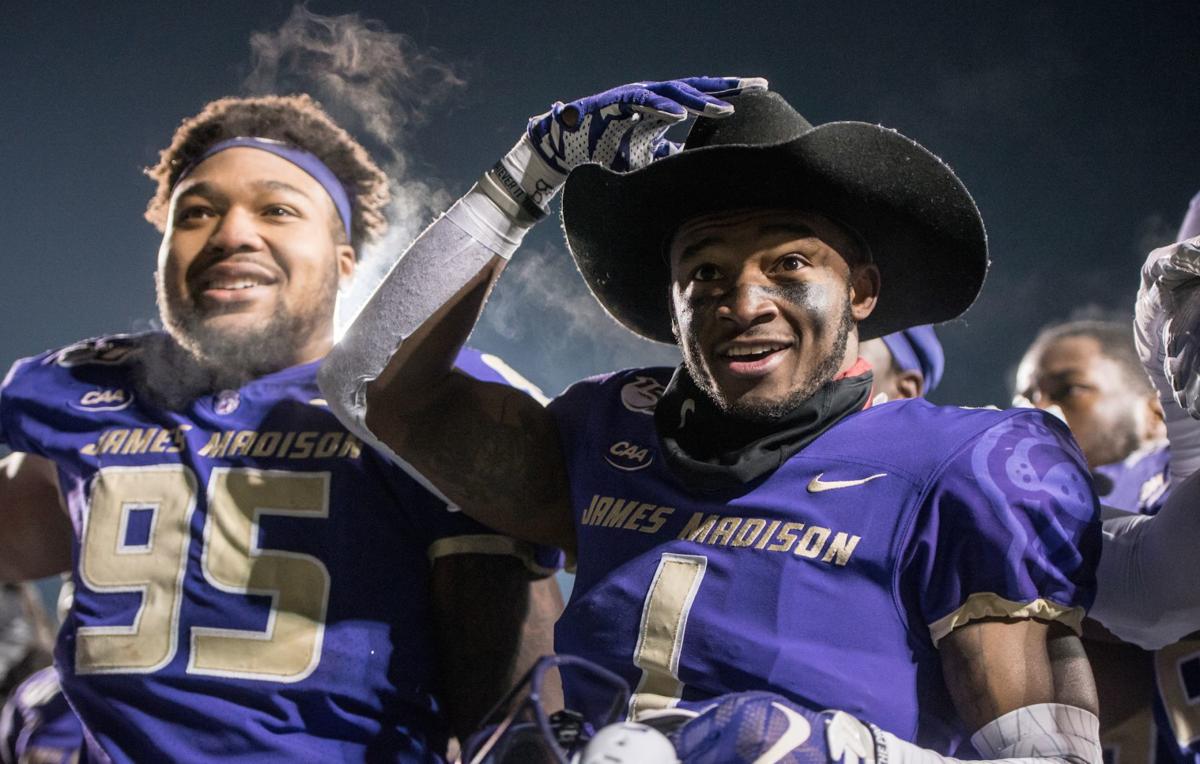 Cornerback Rashad Robinson (1) sports a cowboy hat during the Dukes’ celebration following their 30-14 win over Weber State in the FCS semifinals last month at Bridgeforth Stadium. 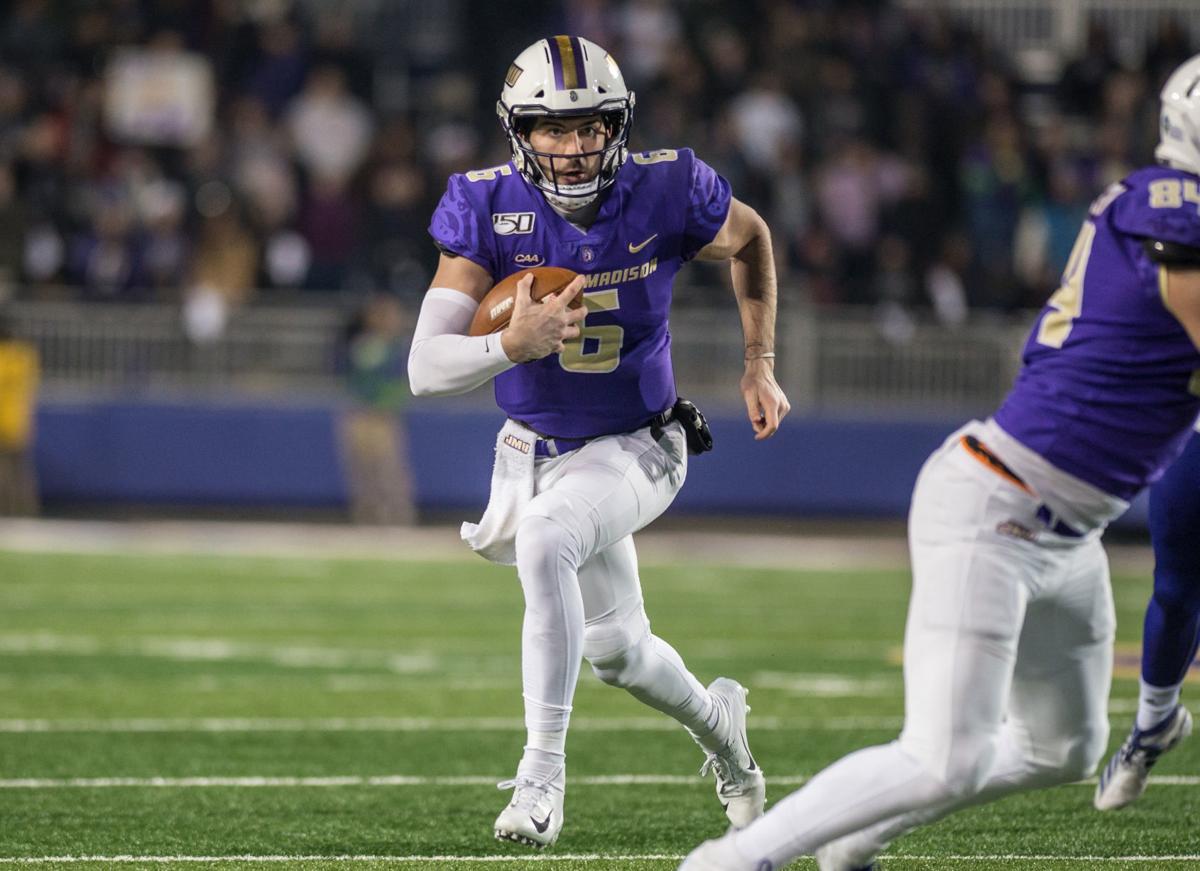 James Madison quarterback Ben DiNucci (6) runs up the field during the Dukes’ win over Weber State in the semifinals of the FCS playoffs in Harrisonburg on Saturday night.

James Madison wide receiver Riley Stapleton (10) catches a Hail Mary pass for a touchdown by leaping over Weber State cornerback Maxwell Anderson (21) as the clock expires at the end of the first half during the Dukes' 30-14 win over the Wildcats in the semifinals of the FCS playoffs on Saturday.

Cornerback Rashad Robinson (1) sports a cowboy hat during the Dukes’ celebration following their 30-14 win over Weber State in the FCS semifinals last month at Bridgeforth Stadium.

James Madison quarterback Ben DiNucci (6) runs up the field during the Dukes’ win over Weber State in the semifinals of the FCS playoffs in Harrisonburg on Saturday night.

In a playoff game against James Madison, it’s a good idea to cover Riley Stapleton.

“Those are two of the more fun games and more memorable games I’m ever going to have,” Stapleton said.

The 6-foot-5, 230-pound senior wide receiver came up with one catch after another until he buried the Wildcats when he leaped above a defensive back and fought off two defenders in order to maintain control of the ball and land in the purple-shaded end zone on a Hail Mary heave from quarterback Ben DiNucci to finish the first half.

That gave the second-seeded Dukes a 17-point advantage that they’d never relinquish in their 30-14 win over No. 3-seed Weber State in the semifinals of the FCS playoffs on Saturday at Bridgeforth Stadium in Harrisonburg before a crowd of just under 11,000 fans.

“Ben did a great job because they brought a field blitz,” JMU coach Curt Cignetti said. “He avoided pressure, found a little escape pocket there, bought some time and with the blitz, they had less coverage guys and Riley was right there.

“And he loves Weber State. He’s got two of his biggest career games against them, but that was a big play.”

JMU (14-1) is off to the FCS national championship game at Toyota Stadium in Frisco, Texas, for the third time in four years. The Dukes captured the 2016 national title game against Youngstown State, and lost to North Dakota State in the 2017 championship bout. JMU again will meet the Bison, who beat Montana State earlier Saturday, on Jan. 11 for this season’s crown.

Stapleton’s touchdown catch on the last play of the first half was his second score of the game, after he hauled 18-yard touchdown reception to put JMU ahead 10-0 in the opening quarter.

He finished with nine catches for 162 yards. His career-high for receiving yards came two years ago against these same Wildcats in the quarterfinals of the 2017 playoffs when he made eight grabs for 189 yards and a touchdown.

“We should give him a scholarship as well,” Weber State coach Jay Hill said with a grin. “He’s had two humongous games against us and he’s a tough matchup for the way we play. It’s man-to-man and he does such a great job of catching contested balls.”

The Hail Mary catch came only after Hill called timeout when the Dukes tried a long field-goal attempt for kicker Ethan Ratke. The kick was well short, and Weber State could’ve gone into the locker room only down 17-7, but the timeout gave JMU an opportunity to rethink its strategy.

“I got to see how far we missed it by,” Cignetti said of the field goal. “And figured we had a much better chance of throwing a Hail Mary.”

Stapleton said he wasn’t surprised the Wildcats didn’t adapt to defend him differently than they did two years ago.

“That’s just the way they game planned,” Stapleton said. “And that’s the way we game planned when we were watching film. They play a lot of man-to-man and so we knew there would be a lot of opportunities and I was just fortunate to come down with some.”

Of his nine catches, eight went for a first down or a touchdown.

Dukes offensive coordinator Shane Montgomery said: “The biggest thing about Riley was that watching the game from two years ago, it was the same thing.”

For those JMU players that played in Saturday’s semifinal and the 2017 quarterfinal, it was déjà vu.

“Playoff Riley,” Dukes senior defensive end Ron’Dell Carter said. “Playoff Riley. We played ‘em two years ago and he had the same crazy catches he had today. So it was playoff Riley and when we saw that, we were like ‘he’s back.’”

DiNucci tallied 255 passing yards, 62 rushing yards and accounted for three total touchdowns. The Dukes defense took it from there.

The lone Wildcats touchdown prior to the fourth quarter came late in the first half. Weber State capitalized on a personal foul penalty, resulting in a 2-yard touchdown reception for Kevin Smith.

For the game, the Dukes held Weber State to 256 total yards, 70 rushing yards and a 2-for-10 third-down conversion rate.

JMU was able to celebrate when DiNucci’s 21-yard pass to Stapleton on a fourth-and-10 enabled the Dukes to run out the clock.

“After that last first down I threw to Riley,” DiNucci said, “I think we all kind of looked at each other and were like, ‘Let’s take this in. This is pretty cool.’”