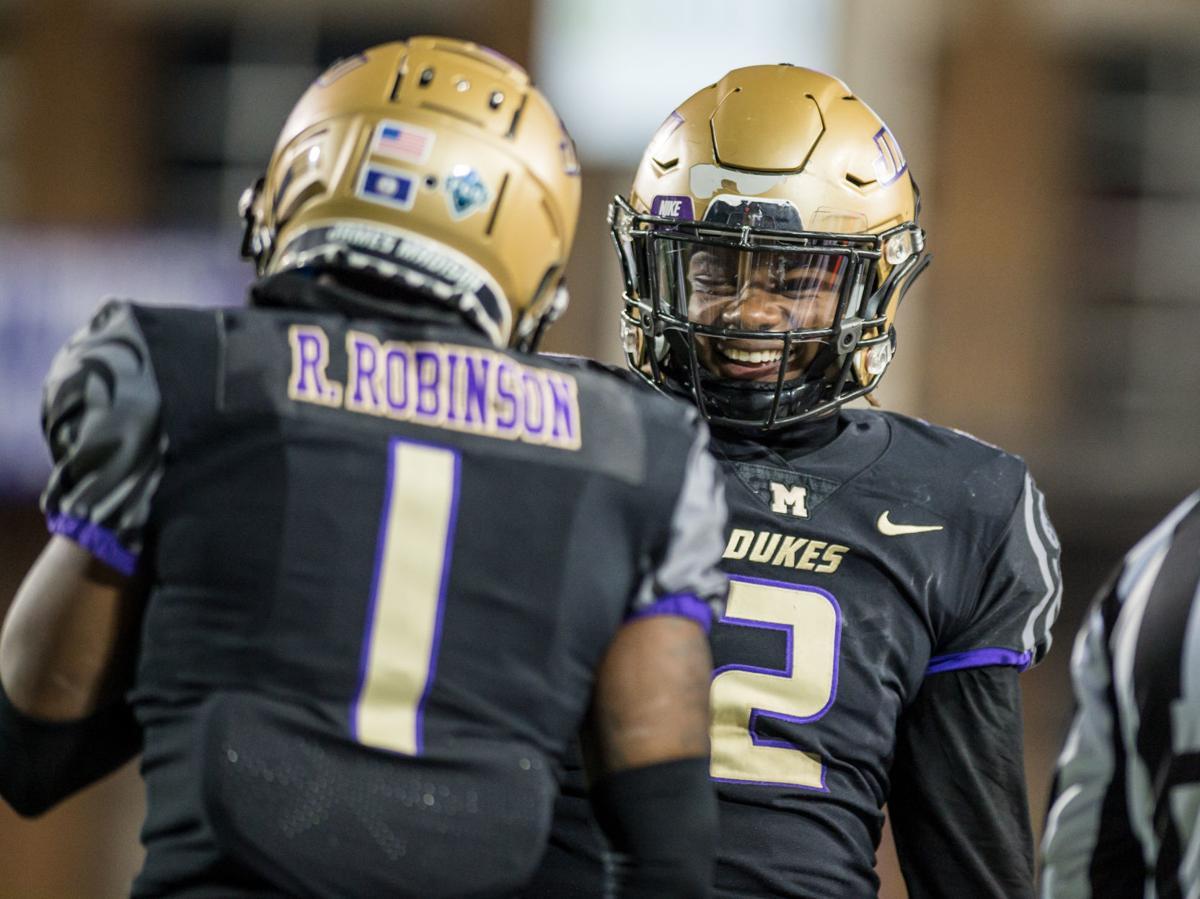 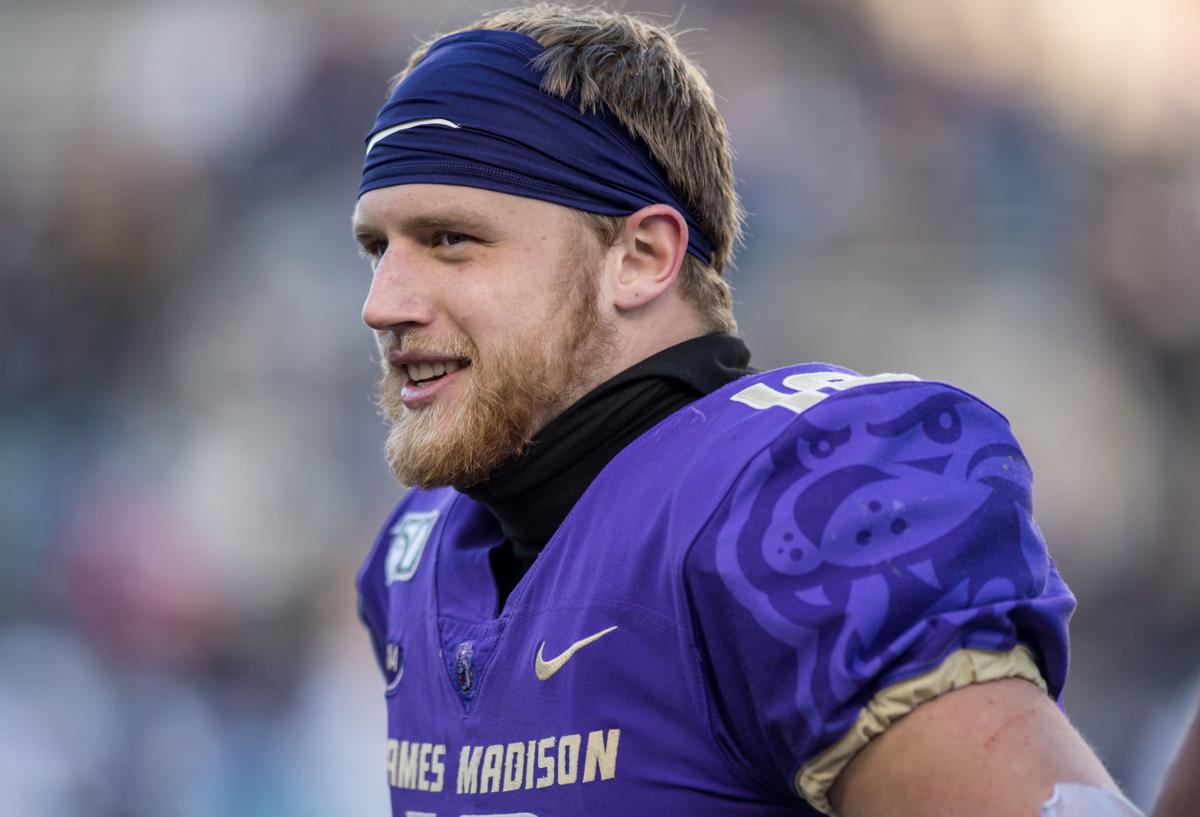 James Madison wide receiver Riley Stapleton (10) smiles as he walks off the field following the Dukes' win over Monmouth in the second round of the FCS playoffs at Bridgeforth Stadium. 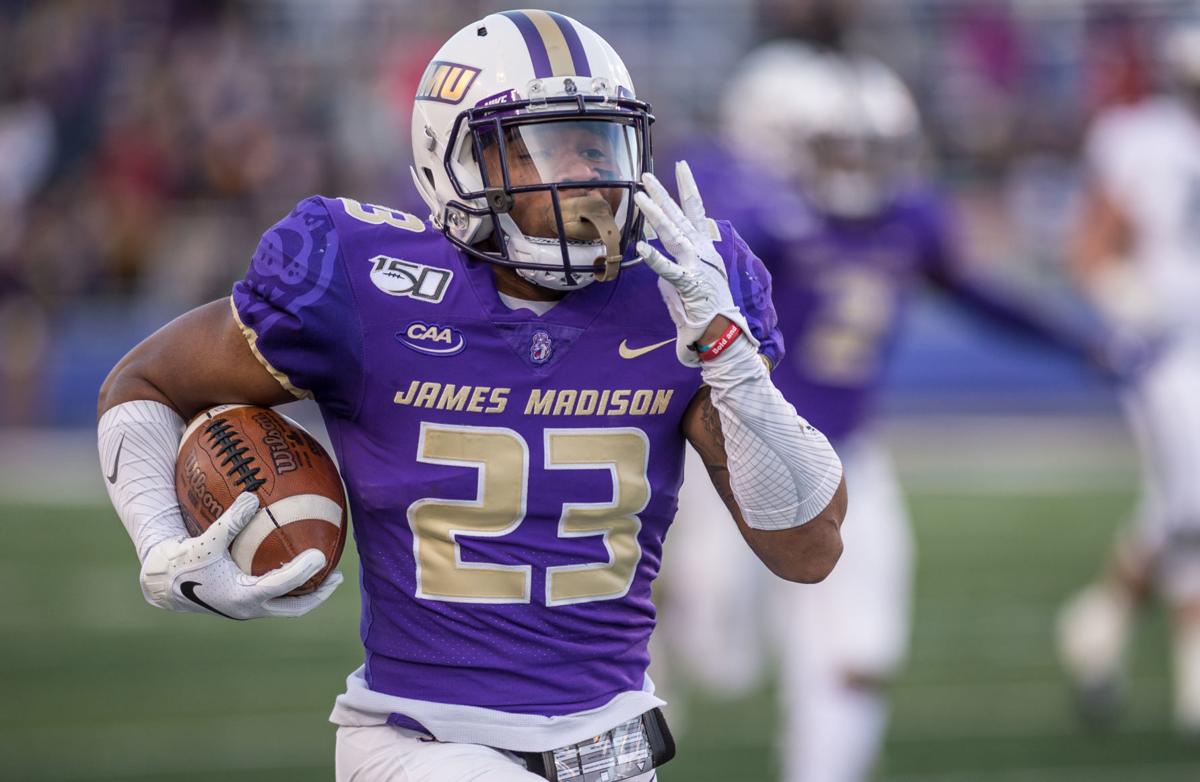 James Madison cornerback Charles Tutt (23) returns an interception for a touchdown during the the Dukes' win over Monmouth in the second round of the FCS playoffs at Bridgeforth Stadium.

James Madison wide receiver Riley Stapleton (10) smiles as he walks off the field following the Dukes' win over Monmouth in the second round of the FCS playoffs at Bridgeforth Stadium.

James Madison cornerback Charles Tutt (23) returns an interception for a touchdown during the the Dukes' win over Monmouth in the second round of the FCS playoffs at Bridgeforth Stadium.

There aren’t that many left.

He is one of just six JMU players who will conclude their careers Saturday, in the FCS national championship game against North Dakota State, while spanning three eras with the Dukes.

They began their careers with ex-coach Everett Withers, suited up during three campaigns for former mentor Mike Houston and are finishing their time at the school now with coach Curt Cignetti.

“It shows that we made it through the tough times,” Robinson said, “and we grinded it out with each other and we made it to the final end.

“We took a picture before training camp, the six of us, but we had started with more than 30 of us [as freshmen] and there are only six left, so it’s something where I’ll always have a special bond with those guys.”

The head-coaching swaps are just the start of all the changes they’ve witnessed, too.

As Robinson pointed out, the 2015 roster featured 35 true freshmen. Of those, six graduated after last season, which means 23 others departed the team at different times for various reasons. In addition, Robinson and his five fellow longstanding Dukes were teammates in 2015 with ex-veterans such as former quarterback Vad Lee to the likes of current freshman running back Latrele Palmer.

And since three head coaches have held the job over the last half decade, there’s been a slew of assistants come and go from Harrisonburg as well – 33 to be exact, including three offensive coordinators and three defensive coordinators.

“With the coaching transitions, you’re trying to figure ‘em out to see how it’ll be,” Holloway said, “because you never know when coaches change how everything will play out with relationships and all that, so I think that’s the toughest thing.”

“They’re all totally different,” Robinson said with a chuckle. “I got to say it. It’s all completely different.

"But at the end of the day, I learned that not only one way works. A lot of people might say that the way Cignetti is doing it is wrong or the way Coach Houston did it was wrong, but we made it to the championship with both coaches.”

Through all of the adjustment the six veterans had to make, they’ve also helped alter the perception of the program and the internal expectations at JMU for the better.

A win against the Bison will give the Dukes their second national championship in four years. To this point, the six fifth-year seniors own a 60-10 overall record, three outright Colonial Athletic Association crowns, 11 postseason victories, a 2016 national championship and three title game appearances.

“The leadership in the locker room,” Stapleton said, “that’s something we learned at a young age is important and how vital it is to a program’s success. And we did our best to implement it as we grew and got older, and now that we’re all redshirt seniors, fifth-year guys, that’s something we try to instill not only in transfers but in young guys as well. It was instilled in us and now it’s trickling down.”

Holloway said he’s appreciative of all the good, bad and indifferent he and the Dukes have faced since he arrived on campus.

He was named an All-American this season and made 16 tackles against North Dakota State in the 2016 semifinals to help JMU reach the national title game.

But he suffered an ankle injury three series into that national championship bout against Youngstown State and had to watch the rest of the game from the sideline as his teammates hoisted the trophy. The next year, he missed all but one contest with injury and said in 2018 he was part of roster that didn’t realize just how hard it is to reach Frisco.

“Especially on a team where a lot of the players haven’t been in that position multiple times let alone once,” Holloway said. “It’s just not easy to never get complacent. Fighting complacency is the main thing and instilling that into the young guys on the team is important. You need to let ‘em know that, ‘You can’t take it for granted’ even though we’re coming out here week after week and doing what we’re supposed to do. We’re doing it for a reason and we’ve got to prepare the right way.”

To cap their careers with another championship, “it’d mean the world,” Stapleton said.

Primarily a special teamer for the Dukes, Cobbs has racked up 40 tackles over his career. The Hayfield High School product had a career-high four tackles in the 2017 season-opener against East Carolina and a 2019 season-best three tackles against William & Mary and New Hampshire.

An All-American by the Associated Press, Hero Sports and STATS FCS as a senior, Holloway enters the title game with 320 tackles for his career and 115 for this season. The Newport News native is a team captain who played parts of this campaign with his broken hand in a wrapped up club.

The Baltimore native has helped stabilize JMU’s offensive line since his sophomore season when he was a second-team All-CAA selection. Jackson has started at right guard this season, but played right tackle and left guard earlier in his career.

After missing all of last season with turf toe, Robinson used his additional year of eligibility well, taking on team captain duties and becoming a second-team All-CAA choice this year after earning All-American honors in 2017. Robinson, a Richmond native, goes into the championship game with the third most interceptions (13) in school history.

Stapleton has been at his best in the postseason, registering 46 catches for 731 yards and five touchdowns over his last nine playoff games. The Indiana, Pa., native is third all-time in JMU history with 159 career receptions and has become a mainstay in the starting lineup since the beginning of the 2017 season.

Injuries slowed down the back half of Tutt’s career, but he had memorable moments with his 92-yard kickoff return for a score against Towson in 2015 and fumble recovery for a touchdown against New Hampshire the following season. Easing his way into his senior year, he’s played in a rotation at cornerback, and had a 79-yard interception return for a touchdown in the second round of the playoffs against Monmouth.