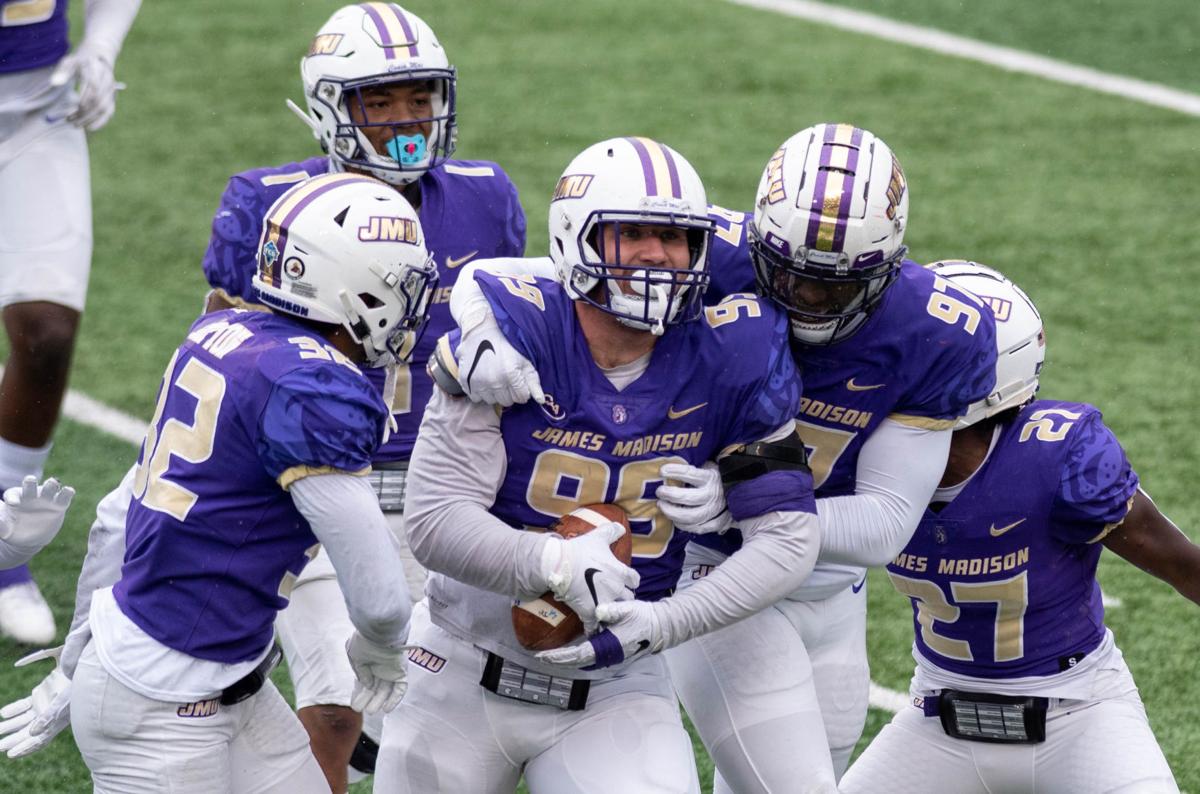 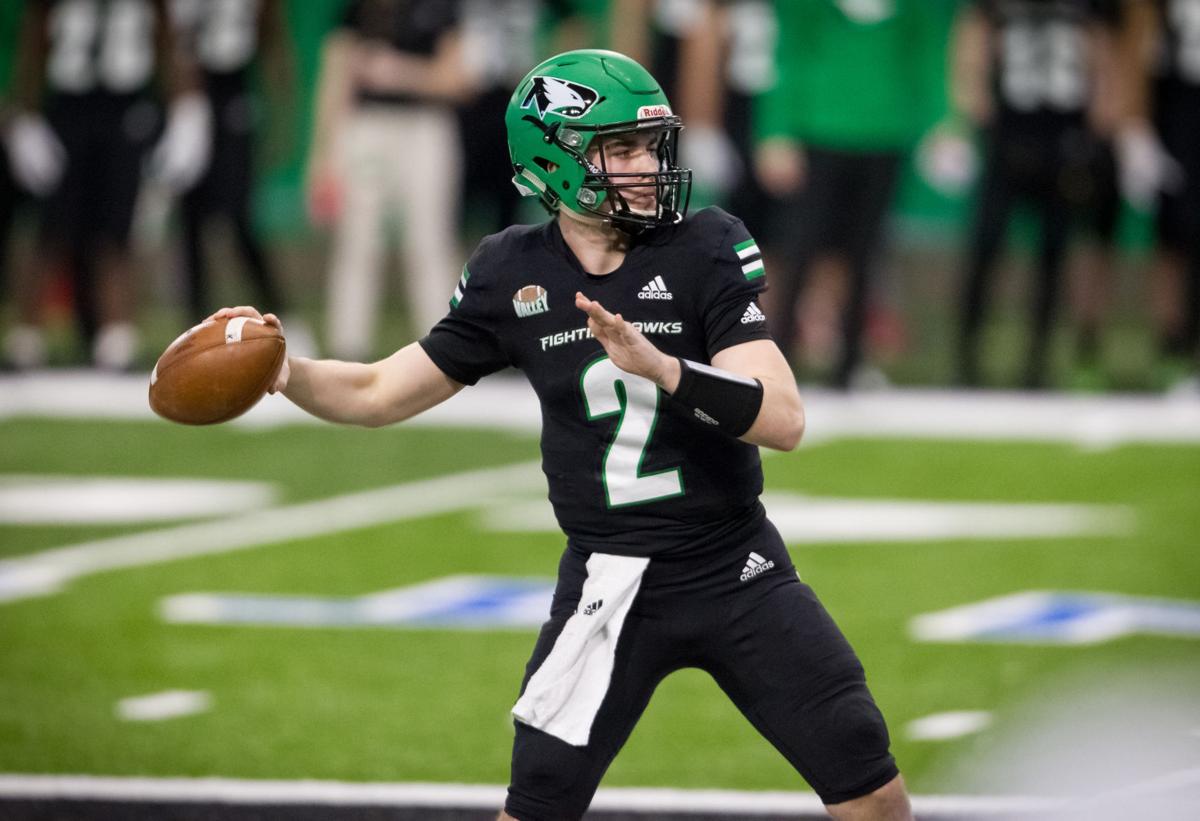 Usually by the time the national quarterfinals roll around, coaches and players know their team’s identity.

They understand their own strengths, pitfalls and what makes those around them successful. And they ultimately have an idea about how to best navigate the rest of the playoffs to reach the national championship contest.

But because Sunday’s 6 p.m. win-or-go-home bout at Bridgeforth Stadium between third-seeded James Madison and North Dakota is only each side’s seventh game of this truncated spring campaign, the Dukes (6-0) and the Fighting Hawks (5-1) are still in the process of pinpointing those pillars of who they are.

McCormick said there are traits unique to this version of the Dukes, though, which he’s noticed throughout their unbeaten regular season and in last week’s FCS playoff opening-round victory over VMI.

Second-year JMU coach Curt Cignetti acknowledged the resiliency of his group, which to this point has shown an ability to overcome in a variety of ways.

Maybe that’s why McCormick senses the growing camaraderie through an unprecedented season.

There was the fourth-quarter rally at Elon in early March to thwart off a serious upset bid from the Phoenix. The Dukes didn’t let two long coronavirus pauses after that impact their on-field play either, and no one has used five devastating, season-ending injuries to key players as an excuse.

“We have been through some adversity,” Cignetti said. “And I’m not talking about the disruptions in our schedule. I’m talking about losing guys we were counting on in fall [practices] to play big roles in our defense. [Defensive end] Isaac Ukwu. [Linebacker] Taurus Jones, who was going to be a huge name this year. [Defensive end] Jalen Green. Then to lose Liam Fornadel, our All-American [offensive] tackle, for the whole season and Sam Kidd, who was starting at free safety. … Our team has that pride and belief and they have their eye on the prize. They don’t slow down. We’ve endured a few things.”

North Dakota has, too.

The Fighting Hawks beat Missouri State last weekend in their first game since March 20. They had a long pause because of coronavirus-related cancellations and opt outs in the Missouri Valley Football Conference.

“You can choose how you handle adversity,” seventh-year North Dakota coach Bubba Schweigert said. “And this team has really done a good job of whatever we’re faced with. We look forward, stay positive and appreciate the opportunity to play. And the result has been pretty rewarding.”

His team’s victory over Missouri State was the first FCS playoff victory in the school’s history. North Dakota reached the postseason in 2016 and 2019, but couldn’t break through to keep its season alive in those years.

“There is a different feeling in the locker room,” Fighting Hawks fifth-year senior linebacker Jaxson Turner said, “that we can really accomplish anything. And the coaches have really instilled in our minds throughout the whole season that we can really be a special team if we put our minds to it and keep playing the way we’ve been playing – not making stupid mistakes, staying disciplined – and I think that’s the way we played in our first[-round] game and hopefully it’ll carry over [against JMU].”

Though the Dukes are the ones who have played on this stage before, with three national championship game appearances in the last four seasons, McCormick is one of a only few on their roster with significant playoff action under his belt.

“But so far everyone has been prepping and there’s a sense of readiness and excitement for the next round,” JMU senior wide receiver Scott Bracey, a transfer from Duke, said. “Whether it’s in the locker room or the meeting rooms, everyone is preparing and we’re going to feel pretty confident about going into the game once we put the work in and get everything done we need to get done before the game.”

The Coaches: Schweigert, in his seven seasons at the helm of the Fighting Hawks, has led them from the Big Sky into the MVC and to their first-ever FCS playoff win. He’s 42-33 in his current role and 64-54 in his 10th season as a head coach. From 2004 through 2007, he was the head coach at Division II Minnesota Duluth.

Both head coaches trust in their offensive and defensive coordinators. JMU defensive coordinator Corey Hetherman is doing another great job in his second season with the program, as the Dukes lead the country in total defense, are second in the FCS for rushing defense and are third nationally for scoring defense.

The Quarterbacks: JMU will start fifth-year senior Cole Johnson and North Dakota will go with its redshirt freshman Tommy Schuster.

Johnson completed 50 percent of his throws last week for 204 yards and two touchdowns with two interceptions in his first playoff start. He’s the unquestioned starter for the Dukes now, but it wouldn’t be shocking to see a cameo from backup Gage Moloney in a wildcat role against the Fighting Hawks’ aggressive, blitzing defense.

For Schuster, his touchdown-to-interception ratio of 10-to-3 and his 66 percent completion rate are evidence of the strong first season he’s had as the full-time starter.

The Dukes, though, this spring have impacted good quarterbacks enough to get them to play below their typical success. Last week, VMI quarterback Seth Morgan threw three interceptions after entering the game having thrown only one during the regular season. And the week before against Richmond, Spiders quarterback Joe Mancuso completed only 37.5 percent of his throws, having entered the game against the Dukes with a 60 percent completion clip.

“They’re a good defense obviously and one of the best in the country,” Schuster said of the Dukes. “They seem to be really aggressive and pressure a lot and try to get after the quarterback. They’re going to get in your face out wide and they do a little bit of everything coverage-wise. I just see that they’re going to be aggressive, be fast and that they’re going to try to pressure us and force us to make quick decisions when we have to pass the ball.”

Series History: The two schools have never met previously, but North Dakota has seen a Cignetti on the sideline in the past. Curt’s dad, Frank Cignetti Sr., led his IUP squad to a 21-6 win over UND in the 1993 Division II national semifinals.

Must Wrap Up Weah: North Dakota running back Otis Weah has scored at least one touchdown on the ground in each game this spring and he’s averaging 105 rushing yards per game this season.

“This is probably the best running back I’ve faced since I’ve been here at James Madison,” Cignetti said, “and maybe the best I’ve faced in the last four or five years.”

Weah is a bowling ball of a running back at 5-foot-9, 195 pounds. He can duck behind his offensive linemen as he approaches the line of scrimmage and then bounce off defenders who don’t get low enough to bring him down. The Dukes must track Weah with multiple tacklers and wrap him up to bring him to the ground.

Can’t Forget About: JMU’s pair of senior rushers. While UND does it with a feature back, the Dukes have two – seniors Hamilton and Percy Agyei-Obese – who help them boast the nation’s fourth-best rushing offense (247.5 yards per game).

“The running backs are talented, obviously,” Schweigert said. “When you can take it 99 yards for a touchdown, that’s great speed and they were able to do that. And to be able to run the football, that opens up a lot of things for you, so that’s going to be a challenge for our team.”

Carroll has two interceptions in the last two games and McCormick’s interception in the end zone during the first quarter of last Saturday’s win over VMI prevented the Keydets from taking an early lead.

“Your best day is always supposed to be today,” McCormick said about the strides he and Carroll have made, “so our goal is to always be better than we were yesterday and to improve every day.”

Don’t Be Surprised If: Either side has a wrinkle or trick play the opponent has yet to see on film.

Last week, the Dukes unveiled a two-back set for the first time this spring on Hamilton’s 99-yard touchdown run. North Dakota scored on a flea-flicker in the first quarter of its win over Missouri State.

What’s Next: The winner advances to the national semifinals to face the winner of Sunday’s 3 p.m. quarterfinal contest between North Dakota State and No. 2-seed Sam Houston State. The Bearkats host the Bison in Huntsville, Texas.