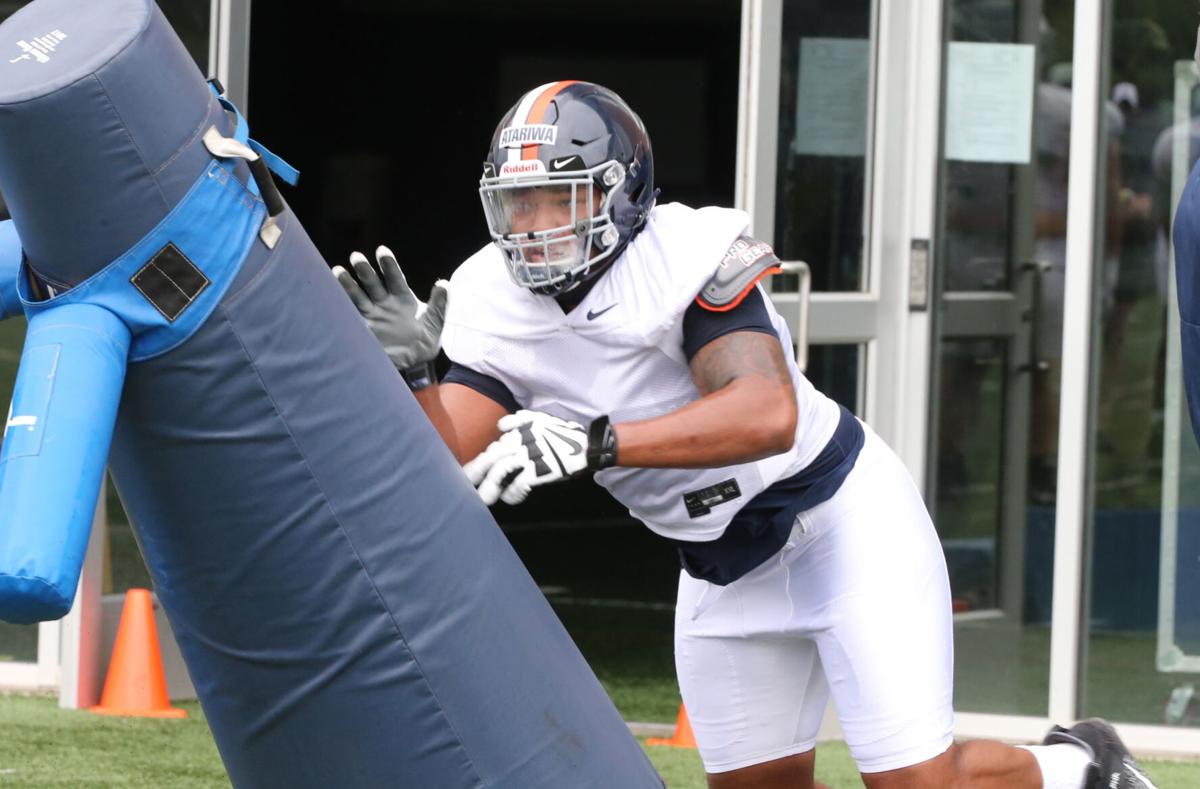 Virginia defensive lineman Adeeb Atariwa, a transfer from James Madison, hits the bag during a practice last month in Charlottesville. 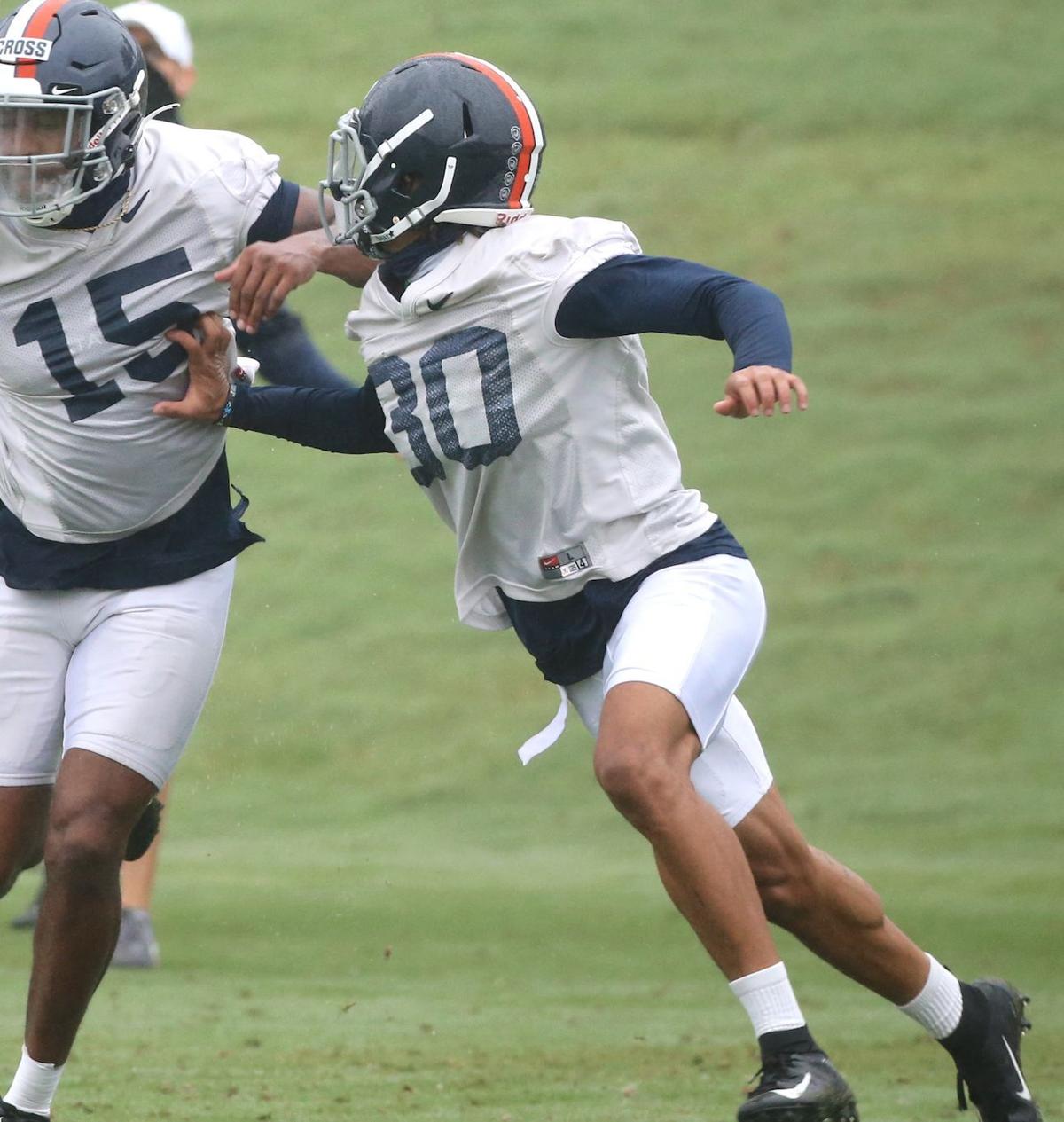 Virginia safety D’Angelo Amos (30), a James Madison transfer, runs through a drill during a practice earlier this month in Charlottesville. 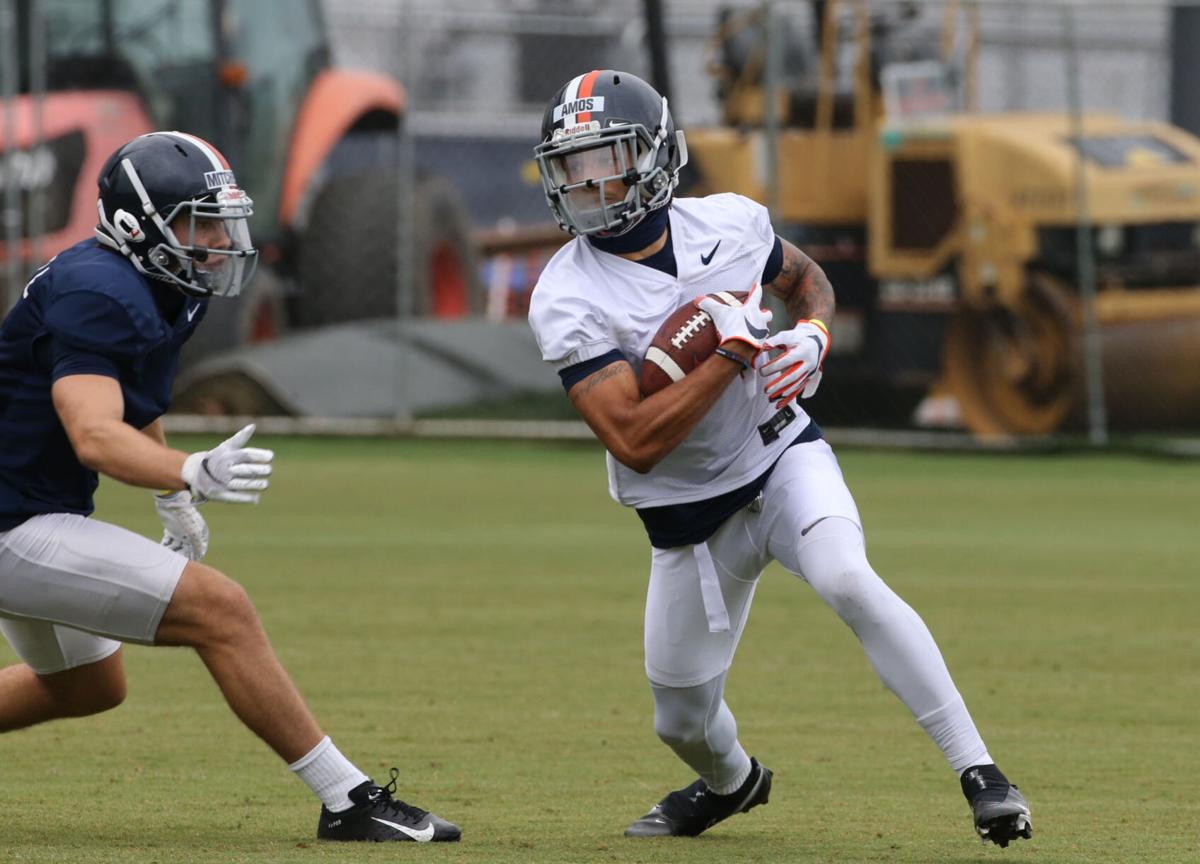 Virginia’s D’Angelo Amos returns a punt during a practice last month in Charlottesville.

Virginia defensive lineman Adeeb Atariwa, a transfer from James Madison, hits the bag during a practice last month in Charlottesville.

Virginia safety D’Angelo Amos (30), a James Madison transfer, runs through a drill during a practice earlier this month in Charlottesville.

Virginia’s D’Angelo Amos returns a punt during a practice last month in Charlottesville.

CHARLOTTESVILLE — This is the chance they wanted, and now the opportunity is nearing.

Not only to actually take the field this fall, but to prove themselves while playing the highest level of college football.

“It’s not like I’m intimated or anything,” Virginia defensive lineman Adeeb Atariwa said. “I’m excited, obviously. I love playing against big names, and getting better competition is great. I’m looking forward to it.”

Atariwa and safety D’Angelo Amos will suit up for the first time with the Cavaliers when they welcome Duke to Scott Stadium for an Atlantic Coast Conference contest on Sept. 26. The pair of graduate transfers left James Madison for Virginia last month shortly after JMU decided it wouldn’t play this fall.

So instead of the usual run of FCS foes – Richmond, Towson, William & Mary and so on – they’ve become accustomed to matching up with during the first four years of their careers, they’ll get cracks at high-profile programs like Miami, perennial College Football Playoff championship contender Clemson and rival Virginia Tech in the ACC in their last season.

“To me, competition is competition,” Amos said. “I encourage it and I love a challenge. I love being in that role where there’s a lot of emphasis on each game. That’s how I go each week.”

Both Atariwa and Amos said they’ve leaned on each other to ease their transition.

They’re two of five FCS imports UVa has added to its roster for this year along with former Towson running back Shane Simpson, ex-St. Francis (Pa.) wide receiver Ra’Shaun Henry and former Bryant long snapper Danny Caracciolo, who began his career at JMU.

JMU beat St. Francis last year and Towson in each of the past two seasons, so Amos and Atariwa are more than familiar with Henry and Simpson. Amos and Atariwa said they’re roommates with Simpson now, too, and that the trio have talked through their move from the Colonial Athletic Association to the Power Five.

“It’s been an awesome part of the transition as well,” Atariwa said. “But just having another guy from JMU transfer into the defense, we’re learning it together. [Amos] helps me out with plays I don’t know and I help him out likewise, so it’s been good having a familiar face.”

That includes redshirting on the Dukes’ 2016 FCS national championship team and returning to the title game as contributors the following year and as starters last season.

Amos was an FCS All-American as a punt returner and a first-team All-CAA choice as a safety. He tallied 135 tackles to go along with two interceptions, 11 pass breakups, four blocked kicks and five punt-return touchdowns during his time with JMU. Atariwa had 87 tackles and 16.5 tackles for loss for the Dukes.

“If you look at their background, those guys have played in like 15- and 16-game seasons with playoffs,” Virginia defensive coordinator Nick Howell said. “So I think the more you play football – and I don’t really think it matters what level it’s at – those guys have had a tradition of expecting to win and so that’s good.”

Howell, a graduate of FCS Weber State took the lead on recruiting Amos to Virginia, according to Amos, and Atariwa said he was a target of Cavaliers defensive line coach Clint Sintim, a former Delaware assistant up until his hiring at UVa in the offseason.

“They’ve also played in important games that mean a lot,” Howell said of Amos and Atariwa. “And I think at that level in my opinion, which I think is natural, if you’re a good athlete and a true competitor you want a shot at playing against better competition, so this is proving grounds for them as well.”

Amos said though the scheme is completely different from what the Dukes do, he’s mostly being used in a similar free safety position like JMU put him in. Atariwa said Howell and the UVa staff are deploying him uniquely, allowing Atariwa to see action across the defensive line. During his four years in Harrisonburg, the 6-foot-3, 280-pounder exclusively lined up at defensive tackle.

“Just being able to do play different positions on the D-Line is awesome,” Atariwa said. “I can say that I hadn’t really ever played [defensive] end significantly in my life, so being able to do that here is awesome and I’m having a lot of fun with it.”

On special teams, according to UVa special teams coordinator Ricky Brumfield, Amos is competing for the starting punt-return gig with Simpson, Billy Kemp and Tavares Kelly.

“Everyone is good and everyone brings value,” Amos said, “so it’s fun back there and [I’m] just trying to catch punts. The number one rule is don’t let it touch the ground and it’s what we strive for every day.”

Amos said one of the toughest challenges him and Atariwa have had so far in Charlottesville is trying to get to know all of their new teammates and coaches in such a short amount of time. Amos and Atariwa had been training with JMU throughout the summer and didn’t enter the transfer portal until it was clear the Dukes weren’t going to have a season to play this fall.

UVa coach Bronco Mendenhall and his assistant coaches are the third staff Amos and Atariwa have had to play for in their college careers, beginning their time at JMU with ex-Dukes coach Mike Houston and ending at the school with current coach Curt Cignetti.

Howell said he thinks the next step for Amos and Atariwa is to fully adjust to how Mendenhall runs his team.

“Playing really hard all the time,” Howell said, “and Coach Mendenhall is good at putting physical stress on guys and I don’t think it’s normal, so they’ve had to adapt to that. But overall I think they’re in good shape.”

About Amos, UVa senior safety De’Vante Cross said: “He’s a funny guy. He fits right in with the group and is a great player. We’re really fortunate to have him and he’s really going to help us.”

And that’s the plan for Amos and Atariwa.

The duo of defenders want to boost the Cavaliers to continue their trajectory forward, they said. Last year, UVa finished 9-5 overall, won the ACC Coastal Division and earned a trip to the Orange Bowl.

“It’s a very quick transition and you’ve got to learn very fast,” Amos said. “But speeding up that learning curve is something I learned from Coach [former JMU defensive coordinator Bob] Trott and Coach Houston and their staff.”

This fall, there are no divisions in the ACC and all 14 full-time league members plus Notre Dame, which joined the conference for this season, will play 10 ACC games and one non-conference contest. The two ACC schools with the best records in league play will earn a trip to the conference championship game.

Virginia was tabbed to finish ninth in the league preseason poll.

“UVa has been growing and growing,” Amos said, “having great players like [Juan] Thornhill, Bryce Perkins, Bryce Hall and so they’ve always had great guys and they still have great guys. It’s the same thing at JMU. We have quite a few players in the league now and just the culture of winning and being above a standard and trying to hold the standard is pretty much the same. There are little details that are slightly different, but to win and hold a high standard of expectation is pretty much the same.”