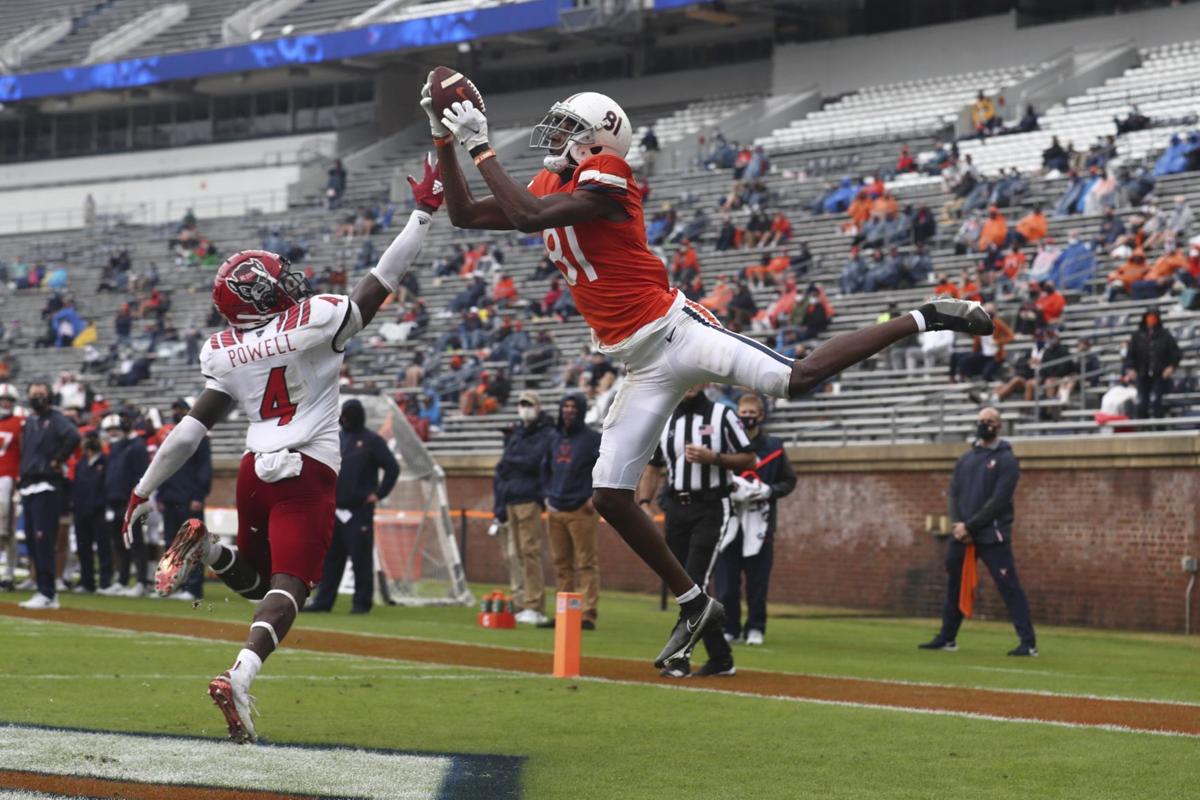 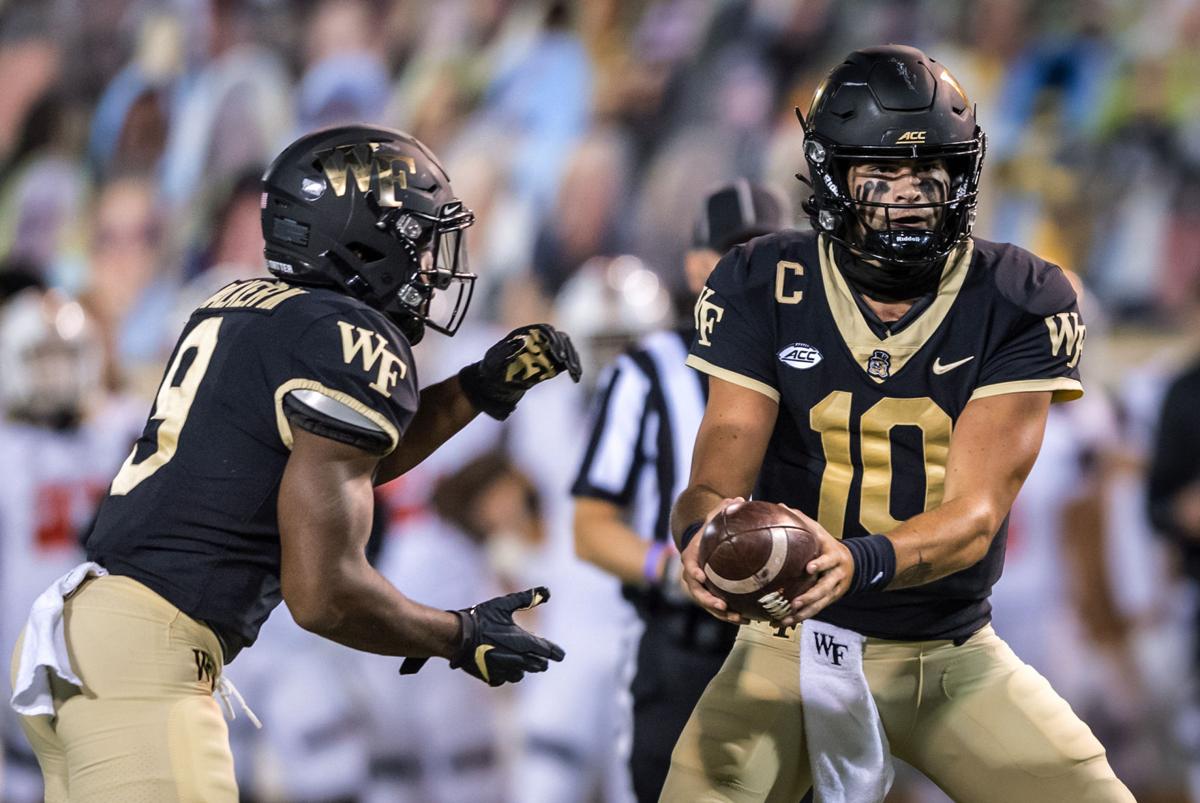 Wake Forest quarterback Sam Hartman (10) prepares to hand off to running back Kenneth Walker III (9) during the Demon Deacons' win over Campbell earlier this month in Winston-Salem, N.C.

Wake Forest quarterback Sam Hartman (10) prepares to hand off to running back Kenneth Walker III (9) during the Demon Deacons' win over Campbell earlier this month in Winston-Salem, N.C.

CHARLOTTESVILLE – There’s no hiding the mission for Virginia today.

The Cavaliers want to squash a troubling trend in hope of halting their two-game losing skid.

“It can’t take us to be behind to play with urgency and focus,” fifth-year UVa coach Bronco Mendenhall said. “Certainly, we’re demonstrating capability because we’re doing so in the second and fourth quarters. The biggest discrepancy is in quarter one. And so, it might be inexperience at quarterback and just facing the different looks and getting acclimated. There might be other factors as well, but it’s making it difficult right from the beginning to have the kind of start that we want.”

And in those opening periods, the Cavaliers’ opponents have combine to outgain the ‘Hoos 361 total yards of offense to 186. UVa has only converted two of its 11 third-down attempts in the first quarter through three contests and it has also turned the ball over twice without forcing any in those same opening stanzas.

Simply put, the Cavaliers have made it a habit of allowing their foes to jump ahead.

“It’s definitely something we’re working on,” UVa junior left tackle Ryan Nelson said earlier this week, “and we’ll probably make changes in practice to put a better emphasis on starting faster in practice. Sometimes things happen in games and we have to adapt faster to it.”

Cavaliers offensive coordinator Robert Anae said: “The emphasis this week is more about ourselves, securing the ball and starting fast as an offense. Not an easy task, but something we have to develop.”

Once UVa gets its offense moving correctly, even the opposition recognizes the threat the Cavaliers can pose.

In each of its three outings this year, UVa has racked up more than 400 yards of total offense.

“They’re extremely creative on offense and they probably manufacture as much offense as anybody in the conference,” Wake Forest coach Dave Clawson said. “They have high-end skill at the running back position, tight end position and the receiver position. The receiver, [Billy] Kemp, he’s from the same high school as [former Wake Forest wide receiver] Greg Dortch and he reminds me a lot of Greg with his ability to get in and out of cuts and they target him a lot.”

Kemp leads the ACC with his nine receptions per game, and has 248 receiving yards to go along with a touchdown. Freshman wide receiver Lavel Davis Jr. has nine catches with three going for touchdowns for UVa.

If Mendenhall and Anae can’t get their offense to start quicker, the Cavaliers’ defense could face a tough task considering the Demon Deacons haven’t had problems scoring. Wake Forest tallied 66 points in its Oct. 2 win over FCS Campbell and racked up 42 points in its Sept. 19 loss at N.C. State.

In setbacks at Clemson and against N.C. State in each of the past two weeks, UVa surrendered the game’s first points in the opening quarter after its opponents’ drives began at or past midfield. Clemson used an opening kickoff return of 52 yards to net a field goal and N.C. State turned an interception returned to midfield into a touchdown-scoring series.

“I don’t want to make that any bigger than it is,” UVa defensive coordinator Nick Howell said. “The challenge on defense is to stop them from scoring, so wherever that ball is placed, complementary football means stop them. If you make a situation bigger than it is, and like literally take the yard lines out of it, take the paint off the field and put the football down, you have to stop people from moving the ball to score.”

The Coaches: Clawson said him and Mendenhall get along well.

“He’s somebody that I visit with over the phone,” Clawson said. “We’ve certainly shared a lot of ideas with each other on how our teams have handled the pandemic protocols and doing everything we can to keep our team safe. And he’s somebody I have a great deal of respect for. I think he’s one of those coaches that is truly in it for the right reasons.”

The Quarterbacks: The Cavaliers could be without starting quarterback Brennan Armstrong today. Armstrong was placed in concussion protocol after being knocked out last week against N.C. State and Anae said the left-handed signal caller didn’t practice on Wednesday.

So if Armstrong can’t go, it’ll be Lindell Stone behind center for the Cavaliers. Stone was 30-of-54 in reserve of Armstrong last Saturday and threw for 240 yards and three touchdowns.

“Lindell got the cold call,” Anae said, “jumped in there and getting hit, having to deliver the ball and I thought for the most part he was able to do what we were asking him.”

Series History: UVa has dominated the all-time series, winning 34 of the 49 meetings between the two schools. But Wake Forest has had the better recent success, taking each of the last three showdowns with the Cavaliers.

Need More From Snowden: Howell didn’t sugarcoat it when he was asked about linebacker Charles Snowden, a 2019 All-ACC honorable mention pick.

“We need more production out of Charles,” Howell said. “That’s what I would say. Simple as that. We need him to produce more than he currently is.”

Snowden, who had 72 tackles, 11 tackles for loss and five sacks last year, only has 14 takedowns and a tackle for loss so far this season.

Don’t Be Surprised If: Virginia runs the ball with its running backs more this week to help alleviate pressure on Stone.

“It’s huge just to establish the running game and stay true to it,” Simpson said, “so we can help out the passing game. I know myself, Wayne, Perris [Jones] or whoever is back there running the ball we can definitely contribute, so hopefully we can get to running the ball again.”