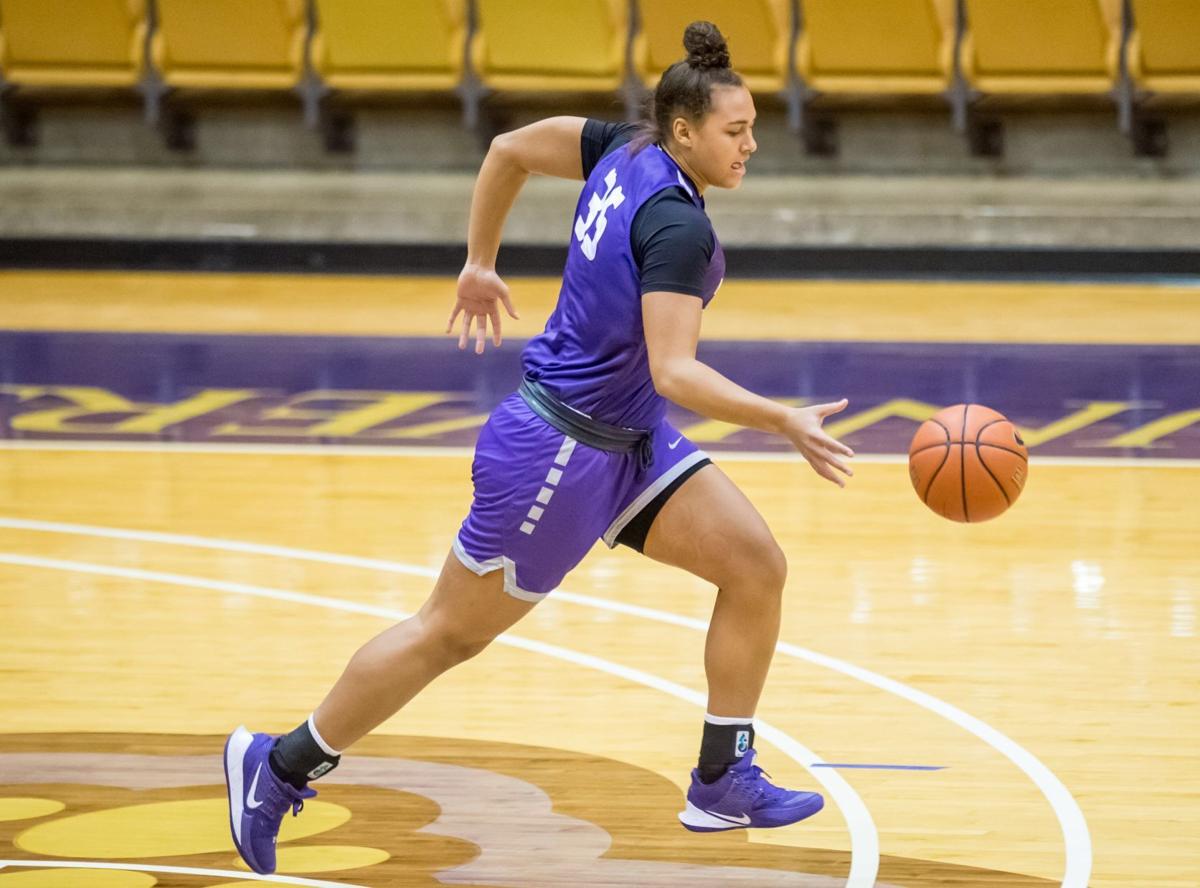 James Madison freshman Peyton McDaniel is among four first-year Dukes who are expected to see lots of playing time in the season opener on Wednesday. 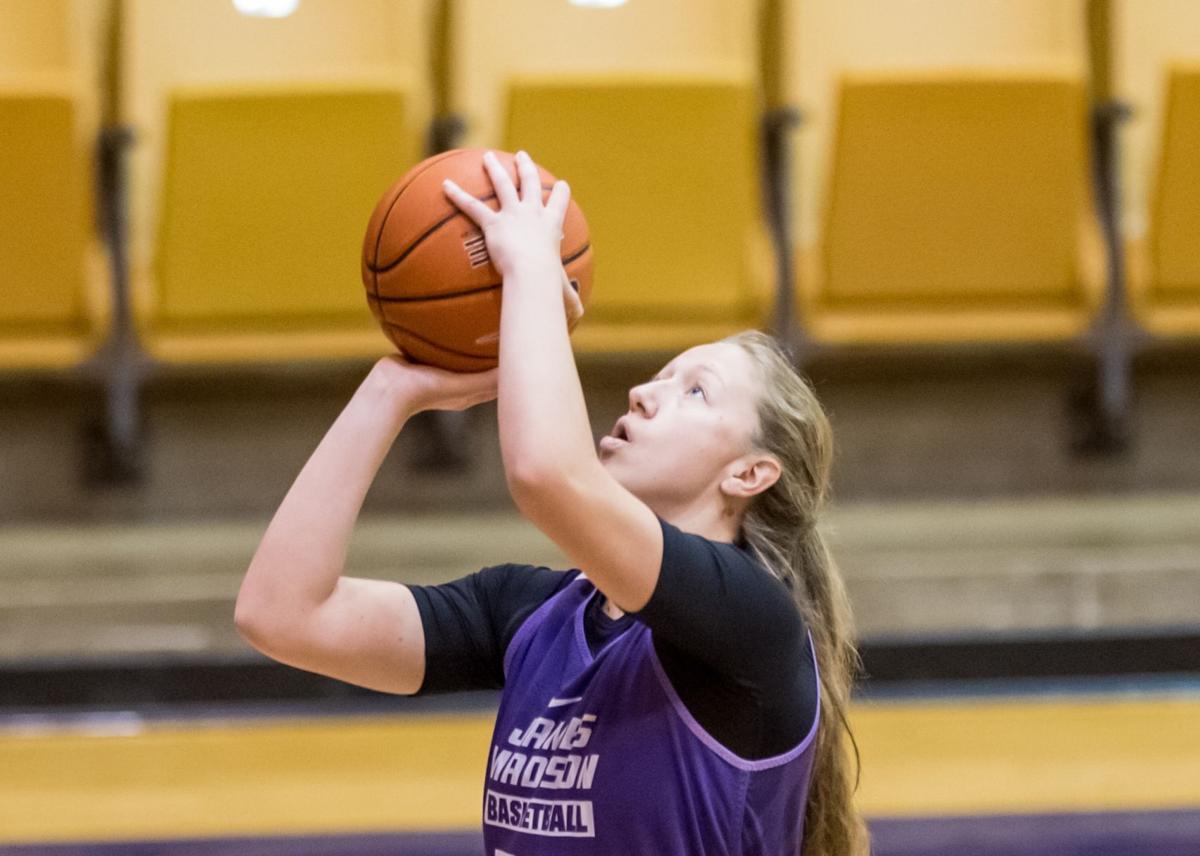 Spotswood graduate Steph Ouderkirk is set to make her college debut for James Madison on Wednesday at the Atlantic Union Bank Center.

James Madison freshman Peyton McDaniel is among four first-year Dukes who are expected to see lots of playing time in the season opener on Wednesday.

Spotswood graduate Steph Ouderkirk is set to make her college debut for James Madison on Wednesday at the Atlantic Union Bank Center.

Over the past few seasons, James Madison coach Sean O’Regan has had the luxury of easing his freshmen into the college game. That won’t be the case Wednesday when the Dukes open the season at home against Mount St. Mary’s.

With injuries and four players in quarantine as a COVID- 19 precaution, O’Regan expects to have eight players available for the opener, four of them who last played in high school. Freshmen Jamia Hazell, Peyton McDaniel, Steph Ouderkirk and Anna Goodman are all expected to be available Wednesday and O’Regan hopes all will play major minutes.

“We’ll just roll with whatever we have for a specific time period,” O’Regan said. “For this time period we will have eight healthy bodies. I hope. I hope it stays that way. Now I have to refocus on the eight I have right here and how I’m going to shape this eight together. It’s going to include freshmen, but some of them were in the rotation anyway.”

The five-player recruiting class — Richmond point guard Bailey Williams opted out of the season, but is expected to join the team next year — was highly regarded coming in and hasn’t let anyone down thus far.

As a group, the JMU freshmen have excelled in preseason practices. Hazell, rated a top-100 recruit nationally, has established herself even among a crowded Dukes’ backcourt. O’Regan said she recently scored 28 points during a 20-minute team scrimmage. The fifth-year head coach has had equally high praise for McDaniel and has long expected Ouderkirk, a Spotswood graduate, to contribute as a freshman.

Injuries have also created an opportunity for Goodman, a 6-3 post player from Newport News, who could see more minutes as Georgia Tech grad transfer Anne Diouf eases her way back from injury.

“We were going to play with freshmen regardless,” O’Regan said. “But that’s what this year is for me. You’re going to have to deal with that sometimes.”

The Dukes have gotten significant contributions from freshmen during O’Regan’s time as head coach. His first year, JMU relied heavily on rookies Kamiah Smalls and Lexie Barrier, but more recently he’s been able to give new players some time to get comfortable.

Last year, nine-time CAA Rookie of the Week Kiki Jefferson came off the bench early in the season before becoming a full-tme starter. Fellow CAA All-Rookie team pick Rayne Tucker really didn’t begin seeing major minutes off the bench until the second half of the 2019-20 season.

O’Regan has rarely in his career entered a game with so few bodies available, but he said he’s comfortable doing so Wednesday. Just how successful the Dukes are, though, could depend on his youngest players.

“We did one time, we did the Wilmington-Charleston swing with what I called the Amazing Eight the whole time,” O’Regan said. “We did go 2-0. But it was different. It wasn’t four freshmen.”

JMU enters the season once again picked as the preseason favorite to win the CAA crown and received a pair of votes in the initial USA Today Coaches’ Top 25 poll, as several other teams around the conference are rebuilding.

The Dukes finished directly ahead of second-place Drexel and third-place Towson in the preseason CAA poll. In-state rival William & Mary, coming off a school record 21 wins last season, might have been expected to give the Dukes the biggest challenge at one point, but that was before guard Eva Hodgson opted out of the upcoming season due to COVID-19 concerns.

Hodgson averaged 20.7 points, 3.8 rebounds and 3.6 assists last season as a sophomore, earning first-team All-CAA honors and may have been the front runner for the conference Player of the Year as a junior before opting out. Without Hodgson, the Tribe was picked to finish eighth, but William & Mary coach Ed Swanson still thinks his team has a shot to contend.

Guards Sydney Wagner (8.3 ppg) and Nyla Pollard (6.1 ppg) are among the most experienced players returning for the Tribe, but William & Mary might also rely heavily on freshmen this season.

The Tribe has four freshmen on the roster, but Swanson said two had stood out so far, 6-1 forward Kayla Beckwith from Laurel, Md., and Australian guard Rebekah Frisby-Smith.

“Kayla Beckwith is a super, super athletic forward,” Swanson said. “She really has a high ceiling in terms of development. She’s going to see significant time, probably at the four spot for us. Another freshman is Rebekah Frisby-Smith. I asked her the other day if she played Australian rules football because when she gets going downhill she is really, really super strong. She didn’t get over here until the middle of September and started school online, but she is going to be a terrific player for us.”