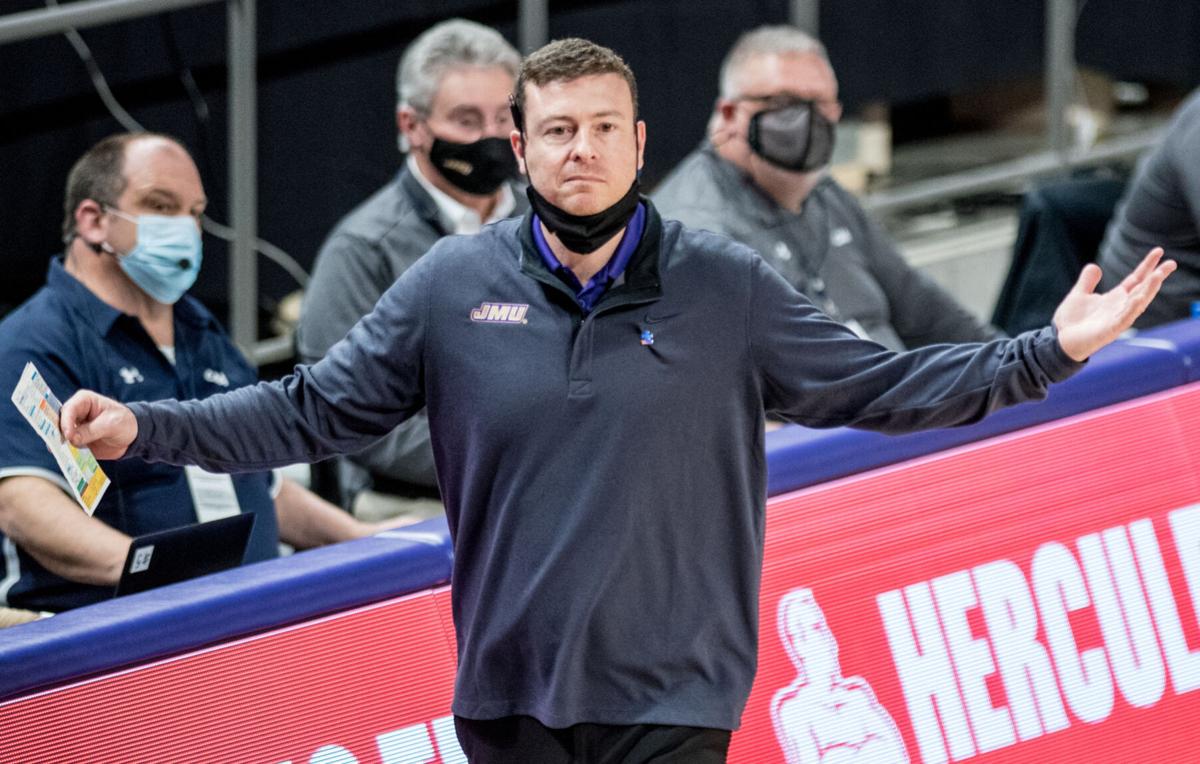 James Madison head coach Mark Byington reacts to a call during the second half of a Colonial Athletic Association Basketball Championship quarterfinal game Sunday. Byington was assessed a technical foul with 1:13 remaining that led to Elon taking the lead. The Phoenix advanced to play Hofstra in Monday’s semifinals. 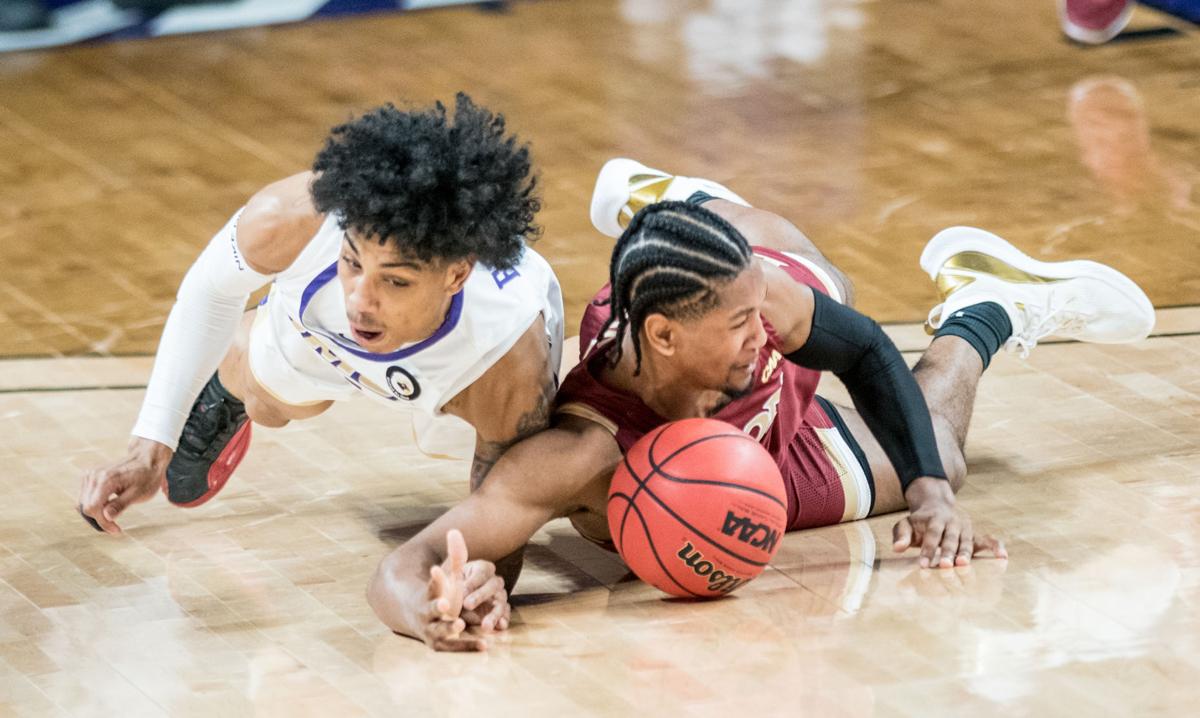 James Madison guard Terrence Edwards and Elon guard Hunter McIntosh dive after a loose ball during the first half of Elon’s 72-71 CAA quarterfinal victory on Sunday. 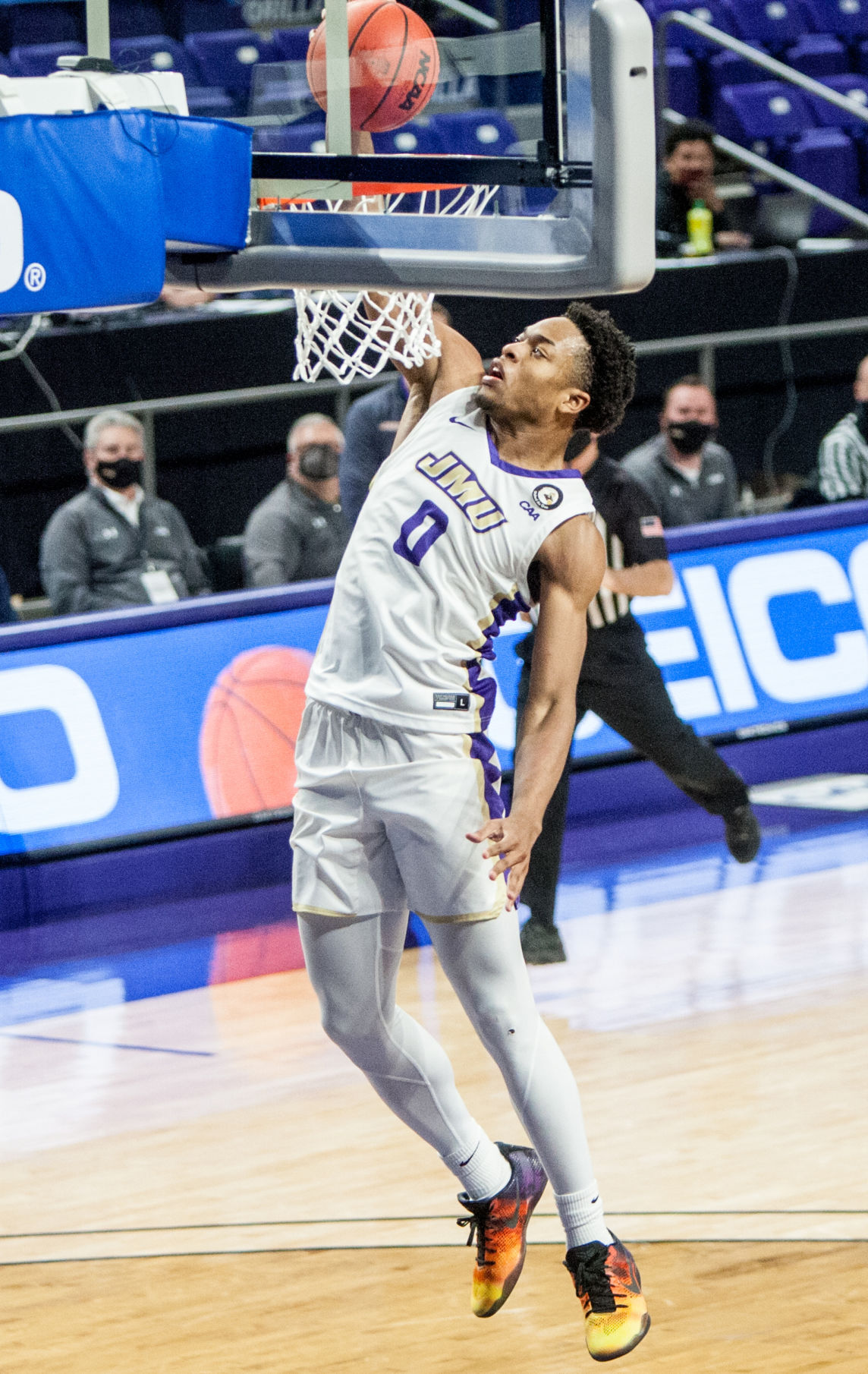 James Madison forward Justin Amadi (0) had a career-high 21 points on 8-for-8 shooting, but the Dukes lost a heartbreaker to Elon in the CAA Tournament for the second consecutive season.

James Madison head coach Mark Byington reacts to a call during the second half of a Colonial Athletic Association Basketball Championship quarterfinal game Sunday. Byington was assessed a technical foul with 1:13 remaining that led to Elon taking the lead. The Phoenix advanced to play Hofstra in Monday’s semifinals.

James Madison guard Terrence Edwards and Elon guard Hunter McIntosh dive after a loose ball during the first half of Elon’s 72-71 CAA quarterfinal victory on Sunday.

James Madison forward Justin Amadi (0) had a career-high 21 points on 8-for-8 shooting, but the Dukes lost a heartbreaker to Elon in the CAA Tournament for the second consecutive season.

One of the best turnaround seasons in Colonial Athletic Association history ended in remarkable, devastating fashion Sunday afternoon for top-seeded James Madison as No. 8 Elon rallied from 15 points down to top the Dukes 72-71 in the conference tournament quarterfinals.

Elon sophomore Hunter McIntosh scored a game-high 24 points and along with senior Simon Wright led the rally as the Phoenix came from behind to knock the Dukes out of the tournament early for the second straight season.

JMU, playing without CAA Player of the Year Matt Lewis who was lost to a knee injury last month, got 21 points from freshman Justin Amadi and junior Vado Morse. But a pair of technical fouls proved extremely costly for the Dukes (13-7), the second one coming in the final minutes to help give Elon the lead.

“I can’t comment on the referees, but I can tell you what was said to get the technicals,” first-year JMU coach Mark Byington said. “I think I’m just stating facts there. ... the one they called on me, it was nothing vulgar or anything like that. I said it was the same call [on the other end.] He thought I was out of line for that.”

Elon opened the game hot from 3-point range, but the Dukes were aggressive going to the basket early before back-to-back 3’s from Hodge and Morse punctuated a 17-3 run that gave JMU a 10-point lead just 12 minutes into the game.

The Phoenix chipped away at the lead a bit after Zach Jacobs was called for a technical foul for yelling “and one” after drawing a foul while scoring. Byington asked official Jamie Luckie if “yelling and-one is a technical?” Luckie responded loud enough for the entire arena to hear “It is today.”

“That’s the first time I’ve ever heard of that when it was nothing but that,” Byington said. “If I could estimate, I think every player says that after every basket they get fouled on. It’s a common thing in basketball. Maybe they are all going to be called now.”

But Amadi made big plays late in the half, including his second steal and breakaway dunk right before the break to put the Dukes ahead 39-29 at intermission.

Amadi and Morse continued to spark JMU in the second half and five quick points from Morse, the third-team All-CAA pick, gave the Dukes a 15-point advantage with 14 minutes left in the game.

But Elon, thanks to its proficiency behind the arc, wouldn’t go away. A corner 3 by Wright, who finished with 18 points, got the Phoenix within five with eight minutes left. Wright, who for the second straight meeting with JMU exceeded his scoring average by more than 13 points, scored six straight at one point to get Elon within a bucket.

“Maybe this team and their defense allows me to get more open looks,” Wright said. “Every time I get open I’m going to put it up. I love playing every game, but I guess you could say I have confidence playing JMU.”

JMU held on to a three-point lead with 1:13 left, but that’s when McIntosh scored a driving bucket and drew a foul. Byington was then assessed a technical foul by official and Page County product Tim Comer, leading to three foul shots from McIntosh, giving the Phoenix the lead for the first time since early in the first half.

The CAA released a statement on the second technical via a conference spokesperson about an hour and a half after the game ended.

“After consultation with the officiating crew, the conference learned that the technical foul was called because the head coach was outside of the coach’s box while arguing a call,” the statement read.

The Dukes never regained the lead and with no automatic bids to the NIT may have seen a regular-season championship season end early. It’s the first time since 1991, when Navy upset JMU, the eighth seed has taken down the No. 1 in the quarterfinal.

The Dukes, who finished 9-21 and 2-16 a season ago under former coach Louis Rowe, claimed JMU’s first regular-season conference title since 2015 and were seeded first for the first time since 1993. But the Dukes haven’t advanced past the quarterfinals since winning it all and going to the NCAA Tournament in 2013.

Whether this is the end of the season for JMU or not remains unclear. In a typical season the regular-season champion would have an automatic berth to the NIT, but due to COVID-19 that tournament will have just a 16-team field with no auto bids.

Byington, who met with CAA commissioner and other league officers after the game, said the Dukes would play in the NIT if invited, but isn’t necessarily expecting an invitation unless other teams decline.

“I feel bad for the guys, it’s abrupt,” Byington said. “You don’t think about the ending and I’m proud of a lot of things the guys did here to make it a memorable year. It was a hard-fought game, but a tough ending.”

Short-sighted, incompetent officiating rears its ugly head again. A couple rabbit-eared buffoons who should be dismissed.

Been calling technicals for yelling "And 1" the past several years. Just watched one in the NBA last Wednesday night. Maybe teach kids to stop yelling that!