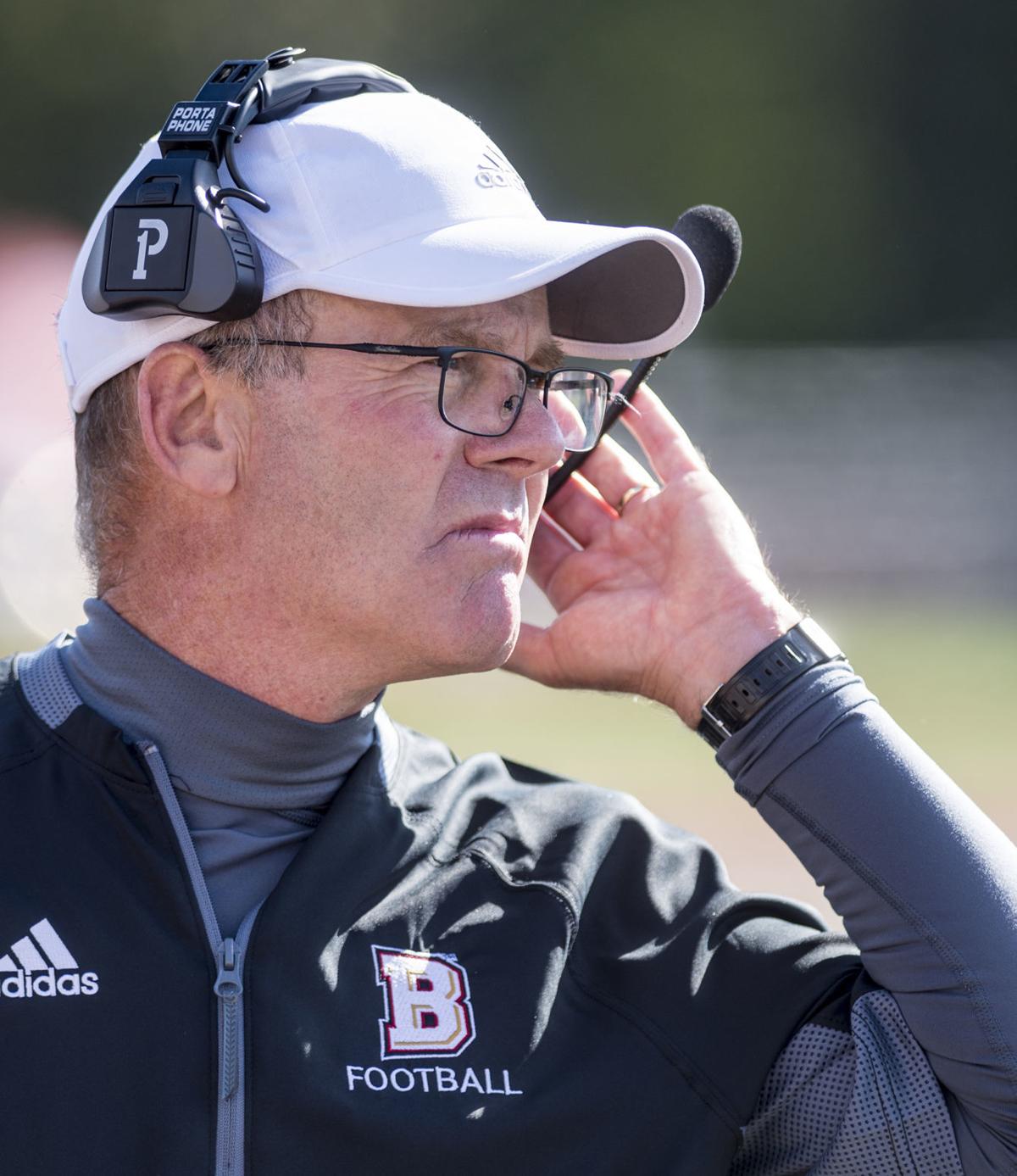 “I think we’ll have a competitive group, but it’s a little different when you are expected to be good and we finished strong those last four or five games last year,” says Bridgewater College football coach Michael Clark. 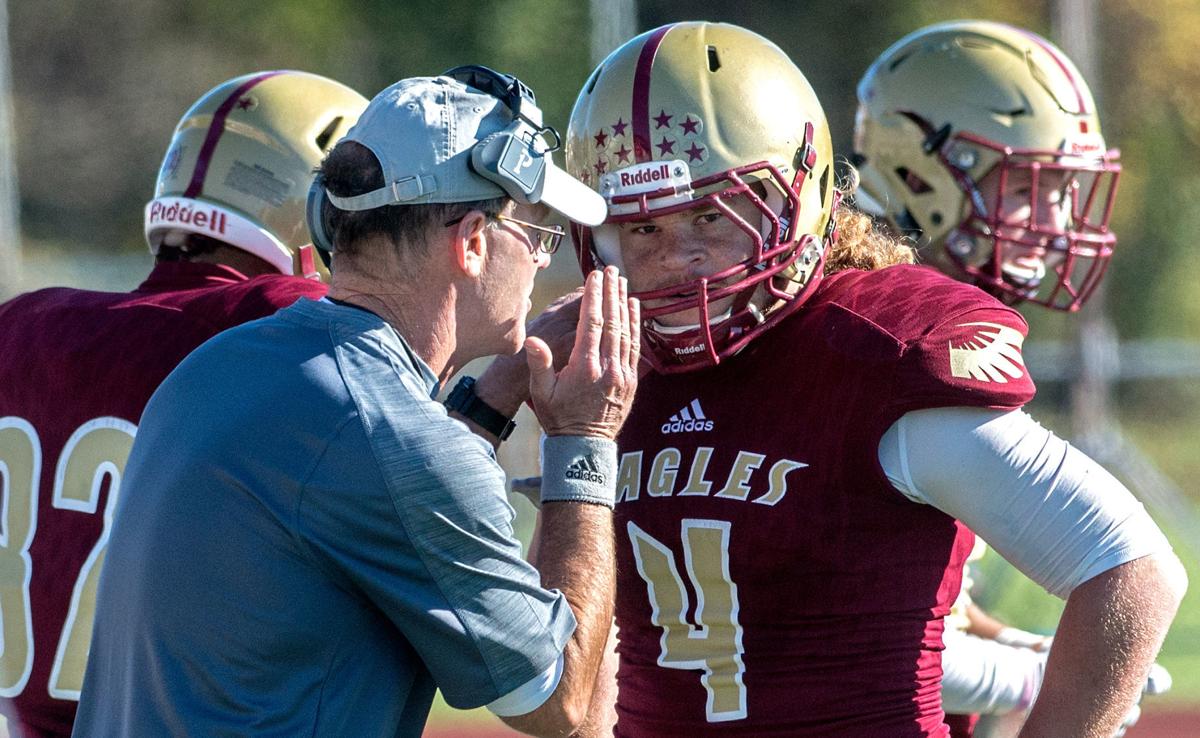 “I think we’ll have a competitive group, but it’s a little different when you are expected to be good and we finished strong those last four or five games last year,” says Bridgewater College football coach Michael Clark.

BRIDGEWATER — With the 2019 football season approaching, Bridgewater College football coach Michael Clark made a change to his bio on the Eagles website.

With William & Mary’s Jimmye Lacock retiring after last season, Clark is now the longest tenured and winningest active college football coach in Virginia. Entering his 25th season at Bridgewater, Clark has won 154 games and should add to that total with a strong group returning to the Eagles this fall.

“I took this job because I had two forced moves,” Clark said. “I had to move my oldest daughter in April of her sixth and seventh grade years. That’s a difficult time to be moving for a 12- and 13-year old. When I took the job the motivation was for me to get the control of it and be a head coach. I told my daughter, you will finish high school here. Four years turned into to 24 and no job is perfect, but if I have a bad day I can walk to work and be reminded I’m the boss.”

Clark has seen plenty of success in two-and-a-half decades in Bridgewater, including a 2001 appearance in the Stagg Bowl, the Division III national title game.

But in a profession where job stability is rare, and in a state where legends such as Laycock and former Virginia Tech coach Frank Beamer have been some of the longest standing in the game, becoming the Commonwealth’s dean of coaches is perhaps his most significant feat.

“With Frank and Jimmye quilting and I can say I’m the longest tenured and have the most wins, at least for a year,” Clark said. “You’ve got to win enough to make sure they keep you around and we’ve been fortunate to win or change. And two, you have to be in a situation where there’s enough value in it to be energized to fight the fight.”

The Eagles will enter 2019 with what could be the Old Dominion Athletic Conference’s top defense, thanks in no small part to returning linebacker Re’Shaun Myers, who was named a preseason All-American by Lindy’s and College Football America Yearbook.

Last season, Myers was an All-South pick by D3Football.com and was the ODAC Defensive Player of the Year after finishing with 84 tackles, including 9.5 for a loss and three sacks.

“In this business, anytime they compliment you, say thank you and take it,” Clark said. “But you have to back it up to. Preseason is nice, but postseason really has more value. He’s a pretty centered guy and I think he’s mature enough to take a compliment and come in and work and say our ultimate goal is for the team to do something big.”

With renovations to the school’s Hall of Fame area, Bridgewater will begin selecting a “Team of Distinction” each year and the 2001 Stagg Bowl team will be the first to receive such an honor.

The 2001 Eagles, which came within three points of knocking off perennial powerhouse Mount Union for the national title, will be recognized during Bridgewater’s season opener on Sept. 7 against Gettysburg at Jopson Field.

With more than 250 Division III football teams, at-large spots in the 32-team NCAA playoff are precious and rare for teams in the ODAC, where the league champion receives an automatic bid.

But this season another team in the ODAC will have an opportunity to play in the postseason with the introduction of the Virginia Beach Neptune Bowl. A team from the ODAC, likely the league’s second-place finisher, will play the Apprentice School on Nov. 23 at the Virginia Beach Sports Superplex.

“We try to provide for students at the Division III level an opportunity to play in the postseason,” Clark said. “What we were looking for was could we get something geographically that the ODAC would embrace and view as a reward. I think that just gives you added incentive. For all the other stuff a Division III player does, the opportunity to play games on Saturday is really a small window.”

Last season, Randolph-Macon won the ODAC title and advanced to the NCAA playoffs while Bridgewater and Hampden-Sydney finished tied for second.