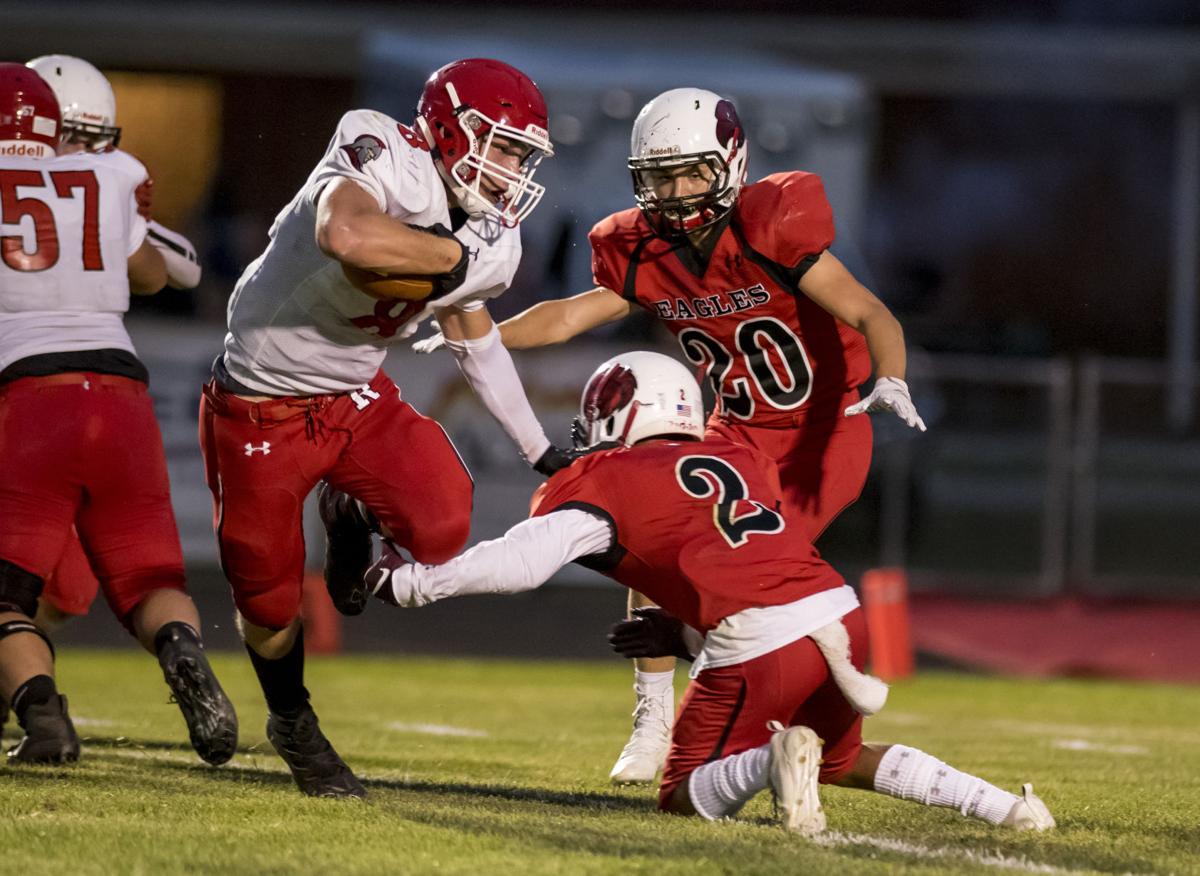 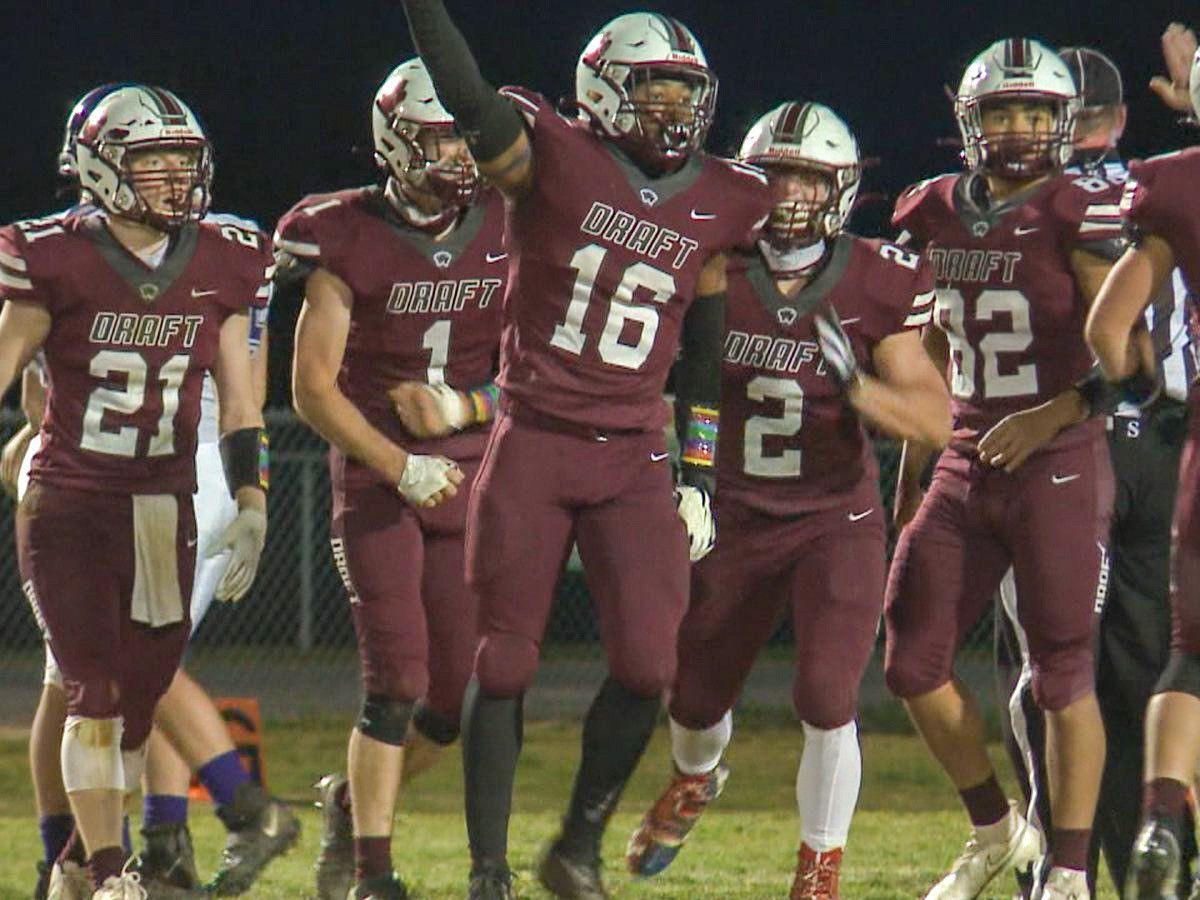 One was making continuous soul-crushing runs behind a business-like offensive line while the other provided bone-jarring hits as a player performing at multiple positions.

Smiley, a 6-foot, 205-pound workhorse back that has started for the Gladiators since he was a freshman, holds almost every rushing record in the book for a program that has had its fair share of impressive players throughout its history as one of the state’s best.

The Ferrum-bound running back is the program’s all-time leading rusher and set the single-season rushing mark for yardage and touchdowns during the 2019 season.

This past spring, during the condensed schedule under the VHSL’s COVID-19 guidance, Smiley still dominated with 1,242 yards and 21 touchdowns as Riverheads captured its record-breaking fifth consecutive Class 1 state title and eighth in program history.

Fomby, meanwhile, was just as pivotal for a Stuarts Draft defense that was one of the best in the state as the Cougars reached the Class 2 state championship once again.

Despite falling in the title contest for a second straight year, Fomby’s year-long efforts were ultimately recognized as he was named the Shenandoah District, Region 2B and Class Player of the Year by the Virginia High School Coaches Association.

Fomby finished the season with 58 tackles — 22 of which went for a loss — along with six sacks and four forced fumbles. He’ll play at Christopher Newport this fall.

Here’s the rest of the 2020-21 Daily News-Record All-Area Football Team:

Miller Jay, Rockbridge County, Quarterback: The junior gunslinger was 89-of-160 passing for 1,264 yards and 11 touchdowns with five interceptions.

Bret McClung, Rockbridge County, Running Back: The versatile senior finished with 1,123 total yards and 16 touchdowns out of the backfield.

Sam Shickel, Turner Ashby, Running Back: The speedy junior had 61 carries for 793 yards and nine touchdowns in his breakout season for the Knights.

Zac Smiley, Riverheads, Running Back: The program's all-time leading rusher was a three-time all-state selection during his time at Riverheads.

Jo-’el Howard, Stuarts Draft, Wide Receiver: The all-state senior finished with 22 receptions for 427 yards and five touchdowns for the Cougars.

Nate Tinnell, Broadway, Wide Receiver: The 6-foot-4 senior was a major deep threat for the Gobblers and matchup nightmare for opposing teams.

Jazen Walker, Harrisonburg, Wide Receiver: The 6-foot-3 senior finished with 14 receptions for 276 yards and five touchdowns for the Blue Streaks.

Ryan Shonk, Spotswood, Tight End: The senior had 10 catches for 209 yards and two touchdowns and also added 30 carries for 210 yards for Spotswood.

Josh Watson, Riverheads, Center: The junior had a firm control on the Riverheads offense and kept it running smoothly up front.

Joel Alvarado, Harrisonburg, Offensive Lineman: The junior standout and Division I recruit was arguably Harrisonburg's best player this past season.

Collin Armstrong, Riverheads, Offensive Lineman: As another three-time all-state selection, the senior was pivotal to the successful Riverheads run game.

Jayson Williams, Stuarts Draft, Offensive Lineman: The junior was pivotal for the Stuarts Draft run game and earned all-state honors as a result.

Landen Stuhlmiller, Broadway, All-Purpose: The junior signal-caller did a little bit of everything and showed off his improvement behind center.

Jo-’el Howard, Stuarts Draft, Kick Returner: The versatile athlete provided speed and athleticism and was a threat to score any time he had the football.

Daniel Cunningham, Rockbridge County, Kicker: The senior was a perfect 25-of-25 on extra points and made 4-of-5 field goals with a long of 32.

Noah Smiley, Riverheads, Defensive End: The all-state junior helped lead the way for a Riverheads defense that was stout throughout the course of the season.

Jayden Watkins, Stuarts Draft, Defensive End: The senior known for his athleticism finished with 24 tackles, a sack and a defensive touchdown.

Latrell Fomby, Stuarts Draft, Defensive Lineman: The senior standout was a versatile player that could make an impact in multiple spots on the field.

Cayden Cook-Cash, Riverheads, Linebacker: The freshman standout made big play after big play for the Gladiators during their run to the state title.

Bret McClung, Rockbridge County, Linebacker: The gritty senior finished with 43 tackles, a sack, an interception and a forced fumble.

Zac Smiley, Riverheads, Linebacker: Although the senior was impressive on offense, his leadership at the linebacker spot was just as key for the Gladiators.

Isaiah Dunlap, Riverheads, Defensive Back: The versatile senior athlete made several big-time plays as the Class 1 Defensive Player of the Year.

Jo-’el Howard, Stuarts Draft, Defensive Back: The versatile senior did it all for the Cougars with 23 tackles, two fumble recoveries and three interceptions.

Bryce Suters, Broadway, Defensive Back: The senior James Madison baseball signee developed a reputation as a hard-hitting defensive back on the gridiron.

Nate Tinnell, Broadway, All-Purpose: The senior leader for the Gobblers led the team in tackles and provided a solid physical presence all over the field.