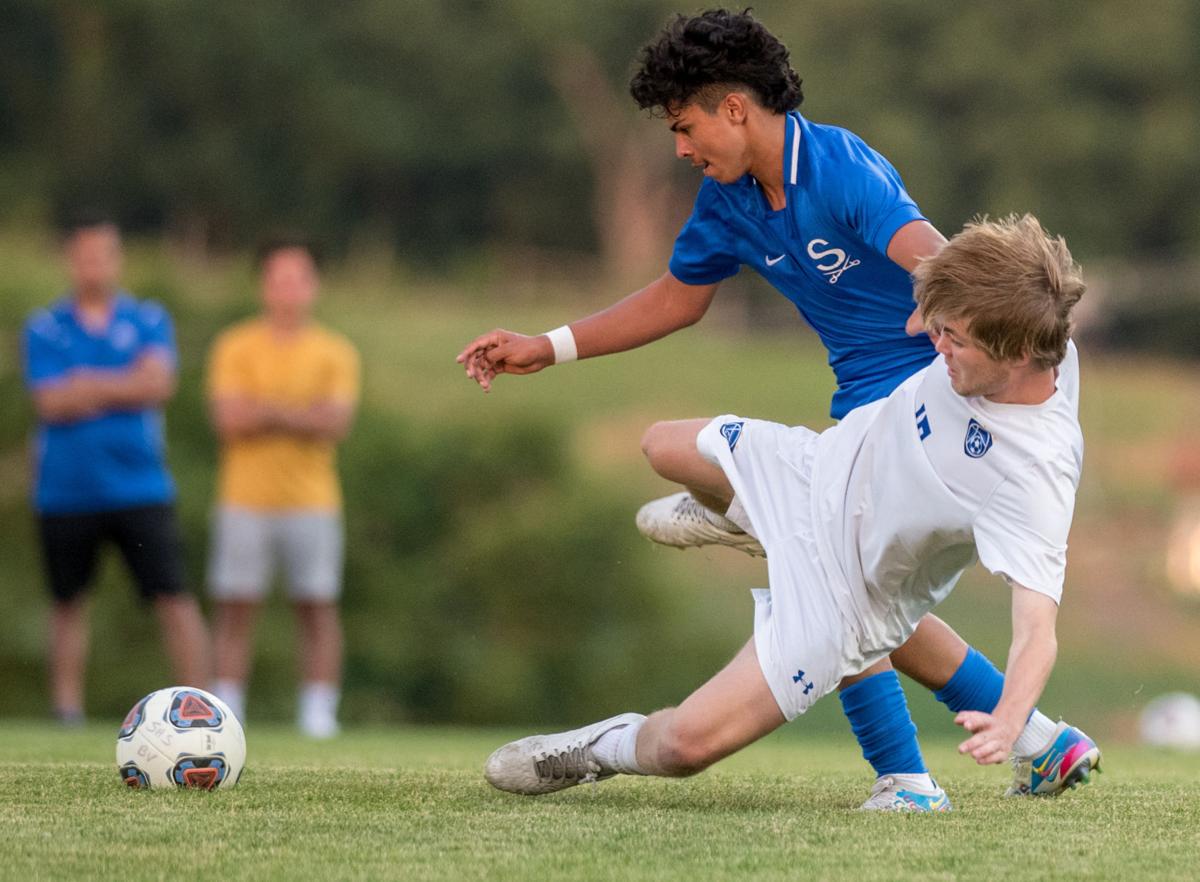 Western Albemarle’s Sam Vigilante loses his balance as he challenges Spotswood’s Ian Joya for the ball during the Region 3C championship game in June. 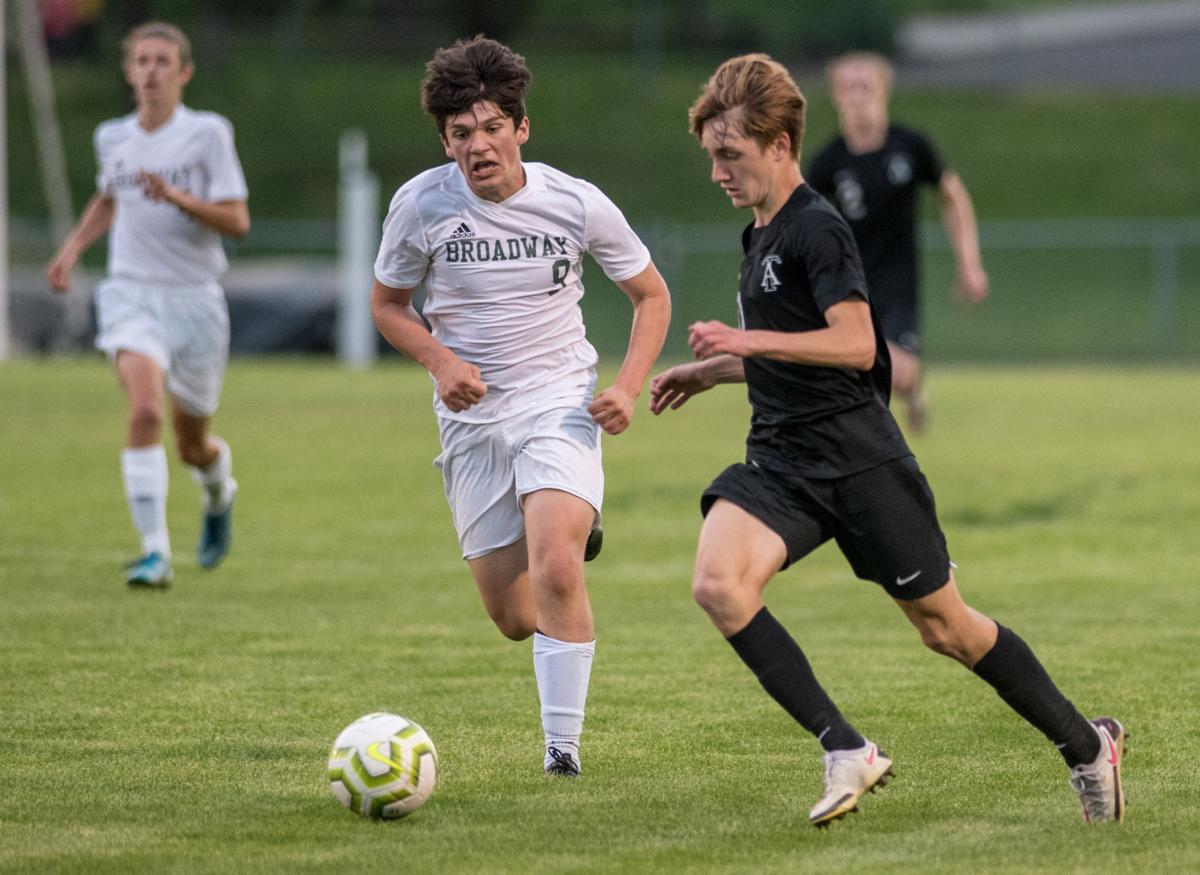 Western Albemarle’s Sam Vigilante loses his balance as he challenges Spotswood’s Ian Joya for the ball during the Region 3C championship game in June.

Editor’s note: We have begun a new series called ‘Who’s Next?’, taking a look at up-and-coming area prep athletes to watch for during the 2021-22 academic year. The eighth installment takes a look at boys soccer.

After the deepest run in program history, Spotswood soccer is trending up.

But it isn’t just the Trailblazers that will be returning plenty of talent next year.

The local soccer scene has been on the rise in recent years with the implementation of several youth clubs, a growing interest in the global game and a year-round dedication from several area coaches at various levels.

Spotswood’s runner-up finish in the Virginia High School League Class 3 state tournament may have just put down the blueprint for future success.

In 2022, there’s plenty of talent around the area that could see similar results.

Let’s take a look at some of the names to watch for on the pitch:

The defensive midfielder will be relied upon in a big way to help the Spotswood defense maintain its high-level success that was so pivotal in 2021.

As a senior, the midfielder will bring experience on the field and be relied upon as a leader for a Page County team that should be improved next season.

The talented underclassmen is the top striker for the Indians and should help his team compete for a Shenandoah District championship in 2022.

The talented midfielder and forward has been a consistent producer for East Rockingham and will be the team’s unheralded leader next season.

One of the area’s top talents is back as an experienced senior and should continue to help elevate a Broadway program that is on the rise.

The freshman was the leading scorer for the JV team last season will be one of many young talents joining the varsity squad with high expectations.

The experienced senior is expected to step up and take on a major role increase in his final year with the program after a strong junior campaign.

As another talented midfielder and forward, the East Rockingham junior will hope to help his young squad spark a turnaround next year after struggles in 2021.

The talented central defender brings experience and leadership to a Fort Defiance team aiming for continued improvement next season.

The experienced midfielder will look to help the improving Page County program continue to take positive steps forward next season.

One of the area’s top talents and a legitimate Division I college prospect is back and expected to help maintain Spotswood’s status as a state contender.

After a strong sophomore campaign, the experienced junior midfielder should take on an increased role as a leader and playmaker on the field.

The senior defender is expected to be a team captain and the heart of a Turner Ashby defense that continued to improve during an impressive 2021 season.

The talented midfielder brings a quickness and some savvy to the field while providing leadership and experience for an improving Broadway squad.

The underclassmen has plenty of talent and will be called upon in a big way next season for a young East Rockingham squad that is desperate for improvement.

Despite being a senior, the midfielder is in his first season playing for Eastern Mennonite but will take on a big role on, and off, the field this year.

As one of many talented underclassmen for Harrisonburg, the sophomore is expected to be a major contributor for a team with high expectations.

The impressive midfielder will continue to take on a bigger role with Fort Defiance while helping the team maintain consistent success.

After an impressive freshman debut, the versatile underclassmen will be relied upon heavily on a Harrisonburg team loaded with talent next season.

The talented midfielder and defender is bouncing back from an injury that kept him out for significant time, but should play a major role for the Flames.

The experienced veteran brings a sense of poise and leadership to a young Harrisonburg squad that should, once again, contend for a district title.

The experienced senior defender has converted to that side of the ball after playing midfielder for Eastern Mennonite in previous seasons.

One of the brightest young talents in the area was an All-Valley District selection last season while scoring four goals and racking up five assists.

The talented defender played a key role for Page County last season, but will be relied upon even more during a pivotal 2022 campaign.