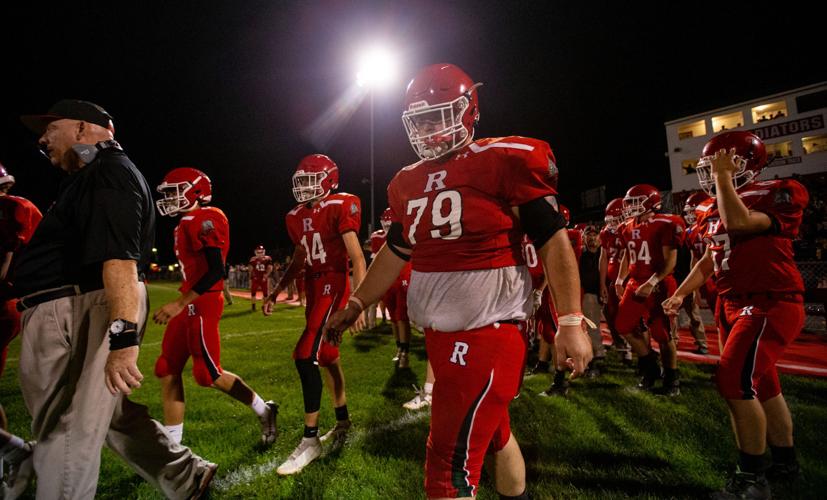 Riverheads walks off the their bench for the handshake after losing to Lord Botetourt 35-21, snapping a 52-game winning streak. 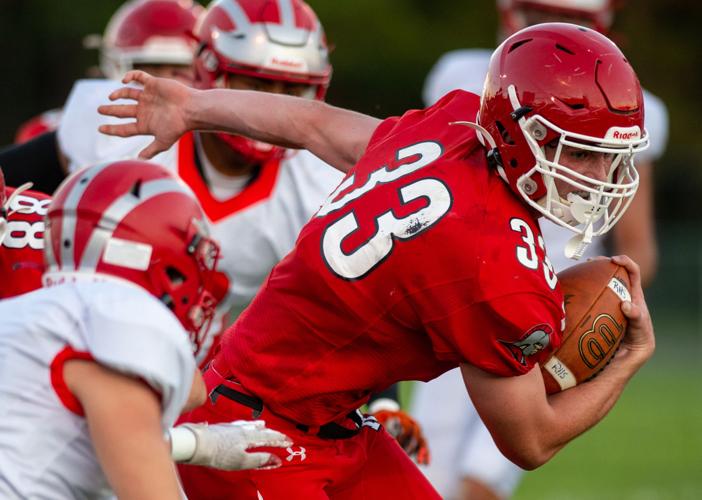 Riverheads’ Cayden Cook-Cash finds a route through the line on a carry. 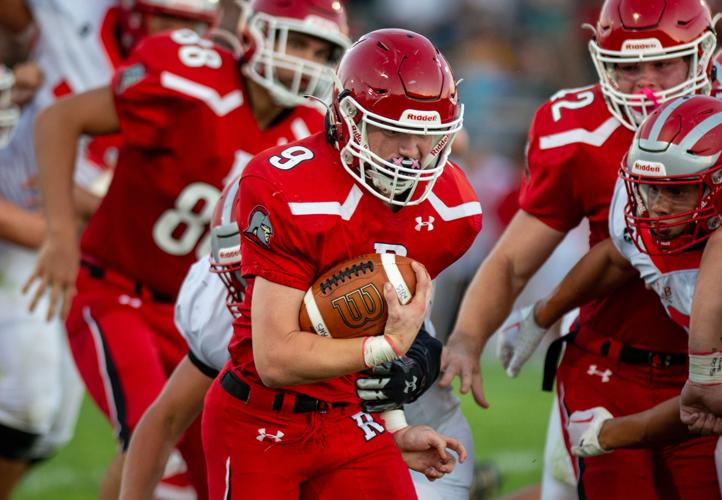 Riverheads walks off the their bench for the handshake after losing to Lord Botetourt 35-21, snapping a 52-game winning streak.

Riverheads’ Cayden Cook-Cash finds a route through the line on a carry.

With the winning streak over, the Gladiators can turn the focus to a different kind of mark as a seventh consecutive state title remains in reach. Riverheads dealt with the disappointment shortly after the clock hit zero.

“These kids and this program have been under tremendous pressure for I don’t know how many weeks,” Riverheads first-year head coach Ray Norcross said. “If we can learn from this and move ahead, then we’ll learn from it. We don’t play next week. We’ll get back to basics for the next two weeks.”

The Cavaliers, a annual contender in Class 3 and coming off a 70-0 victory against Blacksburg, got some revenge for a thrashing at the hands of Riverheads (2-1) last season in Daleville. This time, Lord Botetourt took control in the second half and sent the overflow crowd home after watching the end of the Riverheads winning streak at 52 games — enough to tie, but not break the all-time VHSL mark.

Lord Botetourt quarterback Jakari Nicely rushed 30 times for 181 yards and four touchdowns. He also completed all four of his passes for 59 yards and a score to lead the way for the Cavaliers.

“That was the best game we’ve played in years,” Nicely said. “That was amazing. We had the momentum going into the half after the touchdown pass and felt like if we could score and get a stop we’d be good. And that’s what we did.”

Cayden Cook-Cash rushed five times for 107 and a touchdown, but left the game early and the Riverheads offense suffered. Tristan Overbay added 107 yards on the ground for Lord Botetourt.

The Gladiators’ pursuit of the state record began impressively with Cook-Cash breaking tackles on the way to a 64-yard touchdown run on Riverheads’ opening drive. But while Cook-Cash was running wild, the Lord Botetourt quarterback was matching him on the ground.

Nicely guided the Cavaliers to scoring drives on his team’s first two possessions, scoring from seven yards out early in the second quarter to make it a 14-14 ballgame and the barn-burner was on even though Cook-Cash left the game with an apparent injury in the first half.

Riverheads, which rarely throws the ball, found itself in a third-and-long situation and caught the Cavs off guard when Bennett Dunlap went to the air to a wide open Luke Bryant over the middle. Bryant took it 73 yards down to the two-yard line to set up David Austin’s second touchdown run of the evening put the Gladiators back on top.

But Lord Botetourt also had a sparcely used passing attack in its back pocket and put it to use after penalties threatened to kill a drive late in the first half. Instead, Nicely found Cade Lang in the end zone for a 33-yard touchdown pass with a little over a minute left in the second quarter and the teams went to halftime locked up at 21-all.

Botetourt took the opening kickoff of the second half and put together a masterful drive, capped by another short touchdown run for Nicely to give the Cavaliers their first lead of the night, 28-21. The Cavs then took hold of all the momentum when Ben Gilbert picked off a pass for the first defensive stop for either team.

“We always tell our kids that if you play in big games, then you are a good football team,” Cavs coach Jamie Harless said. “Riverheads defines what high school football should look like. I’m impressed when I see what I saw tonight.”

By the time fourth quarter began, Lord Botetourt was on the move again in Riverheads territory. Again, it was Nicely who took into the end zone to make it a 14-point lead with less than 11 minutes remaining in the game.

Nicely came up with one more big play for the Cavs, picking off a Riverheads pass late to secure the second-half shutout. Now Riverheads is focused on acceptng the loss and moving on.