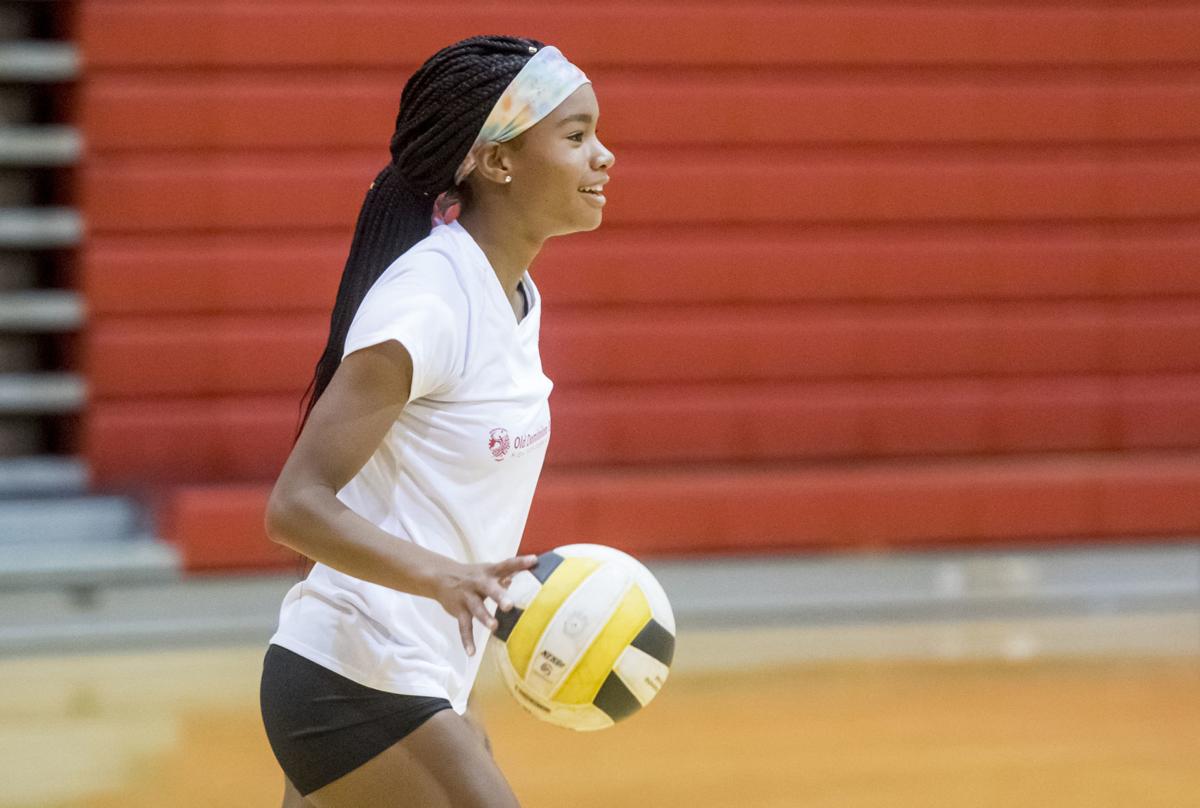 “Even though I can’t play, I still want to help. The girls still need me as a friend. They want me next to them," says East Rock's Makayla Jones. "Even though this injury doesn’t let me step on the court, I’m still a big part of this team.” 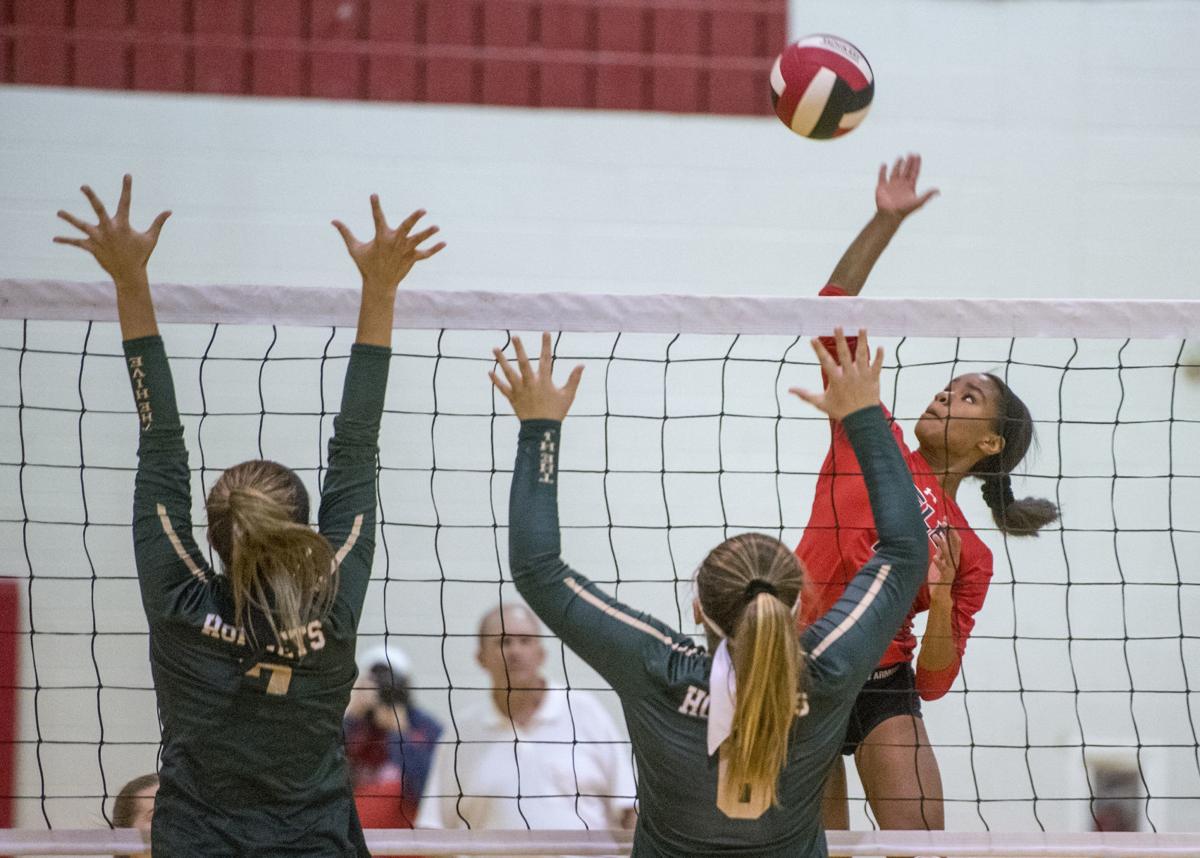 East Rockingham's Makayla Jones sets up a tablet to capture video of the Eagles before the start of a game earlier this season. Jones, a senior, was ruled out for the year after tearing her ACL on Aug. 15.

“Even though I can’t play, I still want to help. The girls still need me as a friend. They want me next to them," says East Rock's Makayla Jones. "Even though this injury doesn’t let me step on the court, I’m still a big part of this team.”

The familiar grin across the East Rockingham senior is back, she said, after a trying couple of weeks that could have easily shattered her bubbly and confident personality.

When Jones, a senior at ERHS, suffered a full tear of the ACL in her left knee during a scrimmage at the EMHS Jamboree on Aug. 15 at Eastern Mennonite University, it was a moment that brought an array of different emotions for the Eagles coaches and players.

“It was a little bit of everything, but mostly sadness,” said fellow East Rock senior Sage Fox. “Personally, she’s one of my best friends. She’s someone we all looked up to. It was just really sad to see her go down like that.”

It was a devastating blow on the court for East Rock, which featured nine seniors and is coming off a historic season in which it won the Shenandoah District tournament championship for the first time and finished one win shy of reaching the Virginia High School League Class 2 state tournament.

But as ERHS fourth-year coach Sarah Wright rushed onto the court at EMU to check on her standout player, she said her role quickly went from a concerned coach to a support system.

Jones, who hopes to eventually become a nurse, has studied ACL tears before and said she held out hope for a positive diagnosis even though she "had a feeling" what was coming.

Once she was officially diagnosed with the ACL tear and ruled out for her entire senior season, she said she sat down with Wright and discussed other ways to contribute to the team.

“It’s really tough, but I am learning to focus on other things now,” Jones said. “I try to think of this as it happened for a reason, you know? It tells me that not everything is about volleyball. That’s how I thought before. Now I’m experiencing other things.

“By me sitting on the bench, I see the court more. I understand other players’ perspectives with what’s happening on the court, too. It’s a learning experience. I’ve been doing some coaching. I think this is good for me. It sucks, but I think I’m handling it well.”

The idea of stepping away from the team for a short time to handle the emotional toll of the injury never crossed Jones’ mind, she said.

Jones said she has made a conscious effort to continue to support the Eagles through practices and throughout each match this season.

Whether it’s helping her teammates during warm-ups, sitting beside Wright during matches or simply wearing her jersey and participating in the captains meeting before each match, Jones has remained a critical part of East Rock’s success this season.

“I want to be part of the team,” Jones said. “Even though I can’t play, I still want to help. The girls still need me as a friend. They want me next to them. Even though this injury doesn’t let me step on the court, I’m still a big part of this team.”

The past two seasons, Jones established a reputation as one of the area’s most electric players with her high-flying kills and contagious personality.

But for all the accolades she achieved on the court — she was the 2018 Shenandoah District Player of the Year and a first-team All-Region 2B selection — both Fox and Wright said it’s her role in the locker room that has had the biggest impact on the program.

“She’s our rock,” Fox said. “Everyone goes to her with anything. She’s always smiling and happy and giving positive feedback to everyone. She’s just a very happy person.”

For Wright, her bond with Jones goes back to 2016 when she was hired as the volleyball coach at East Rockingham and took over the struggling program.

During that season, after seeing the success Jones was having on the JV team as a freshman, Wright called her up to the varsity level and the two have been paired together since.

“She’s done a lot and I don’t think she even realizes everything that she’s done for not only the players, but me, too,” Wright said. “To have her as long as I’ve had her and see how much she’s grown up over the past years and the knowledge she’s gained through the game of volleyball — it’s incredible. She brings a certain skill set to our team, whether she’s on the court or sitting beside me on the bench.”

The Eagles have used Jones’ injury as their motivation this season and it’s paid off.

East Rock came into Tuesday's match with a 6-2 record, including sweeps of Valley District opponents Spotswood, Turner Ashby (twice) and Broadway. The Eagles’ only two losses were to Liberty-Bedford in the Fluvanna Invitational on Aug. 31 in Palmyra.

“That’s the whole reason we do what we do and play so hard when we’re out there,” Fox said. “Everyone is just working together for [Jones]. I don’t think anyone is working for themselves. Everybody is kind of like, ‘What would Makayla do?’ We know she’d love to be out there.”

Watching the team succeed without her on the court has meant a lot to Jones, but she said it means more to see her teammates having so much success on their own.

“I am really proud of them,” Jones said. “They’ve worked really hard. I understand that the girls tell me, ‘Oh my gosh. I miss you so much.’ But I remind them that they’re doing fine. They don’t need me. They’re playing perfect without me. Volleyball is a team sport. It’s not just one person. They don’t need me.”

It’s hard not to make it about Jones when talking about the East Rock volleyball program after the immense impact she’s had over her career both on and off the court.

But seeing her teammates find success without her is what has brought the joy back to Jones’ face that went away when she suffered her injury, she said.

It is also why she said she’ll continue to support the Eagles from the sideline moving forward.

And if East Rockingham is able to reach its goal of winning a Bull Run District title this season and possibly even reaching the state tournament for the first time in program history, Jones said that will make her widely-known smile grow even wider.

“That would mean a lot to me, but it will mean more to my team,” Jones said. “They are experiencing something new in them that they didn’t know they were capable of before. I feel like, ultimately, it would help them more than it would help me. And that’s a good thing.”