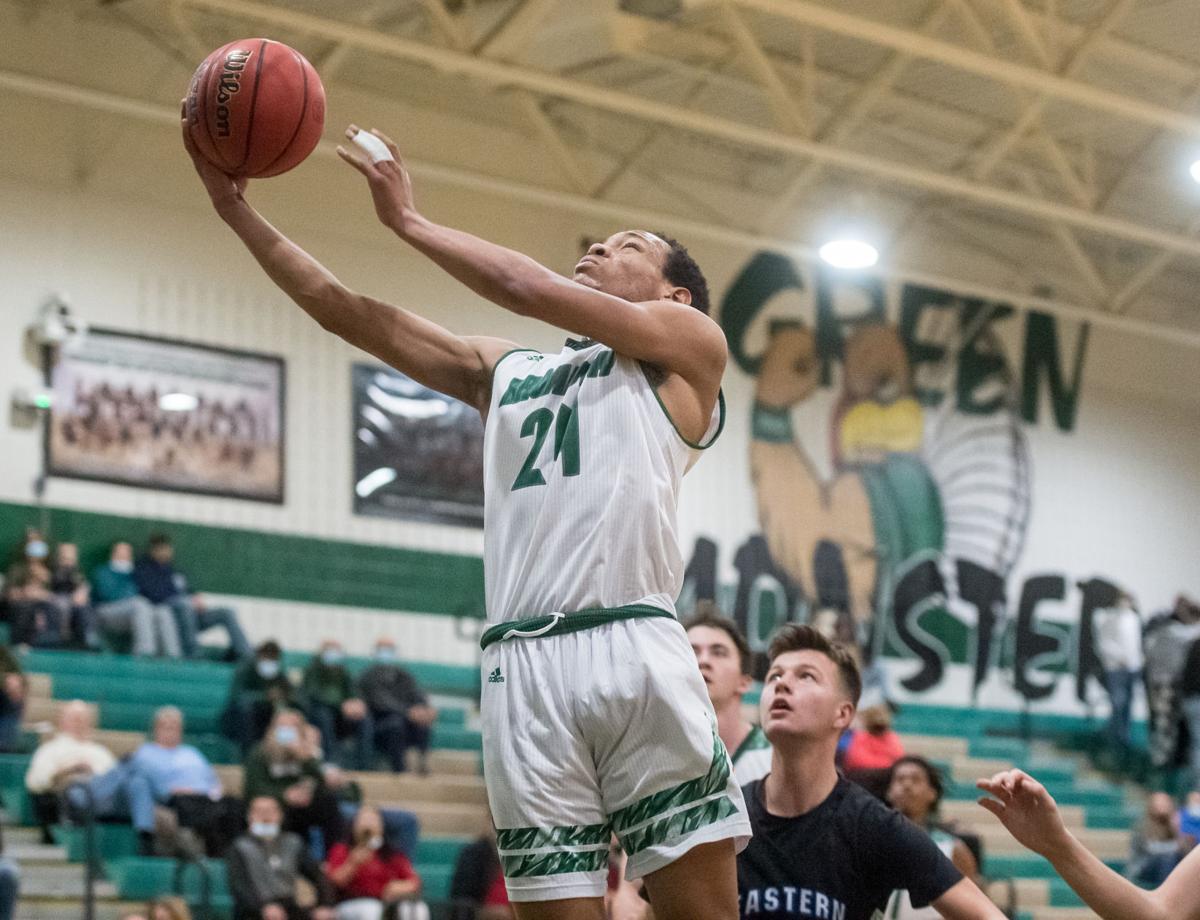 Broadway's Conner Barnes goes up for a shot past the Eastern Mennonite defense. 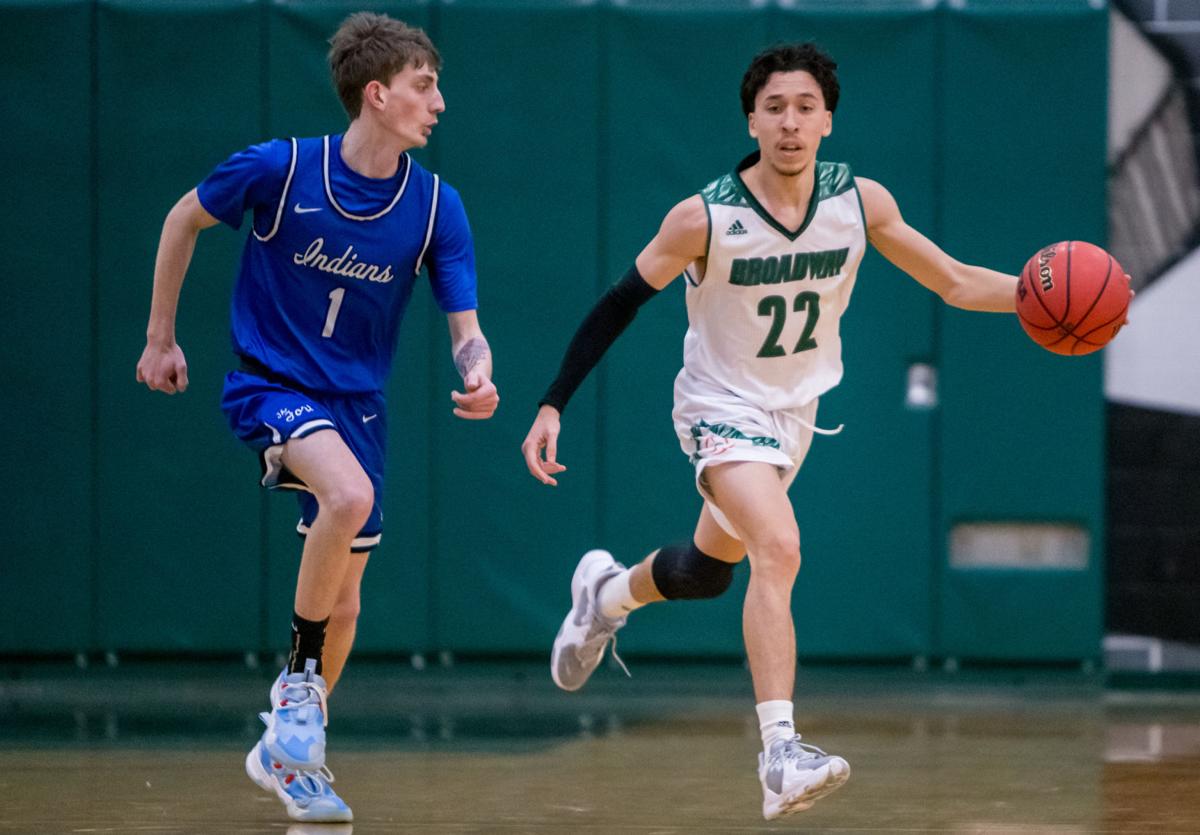 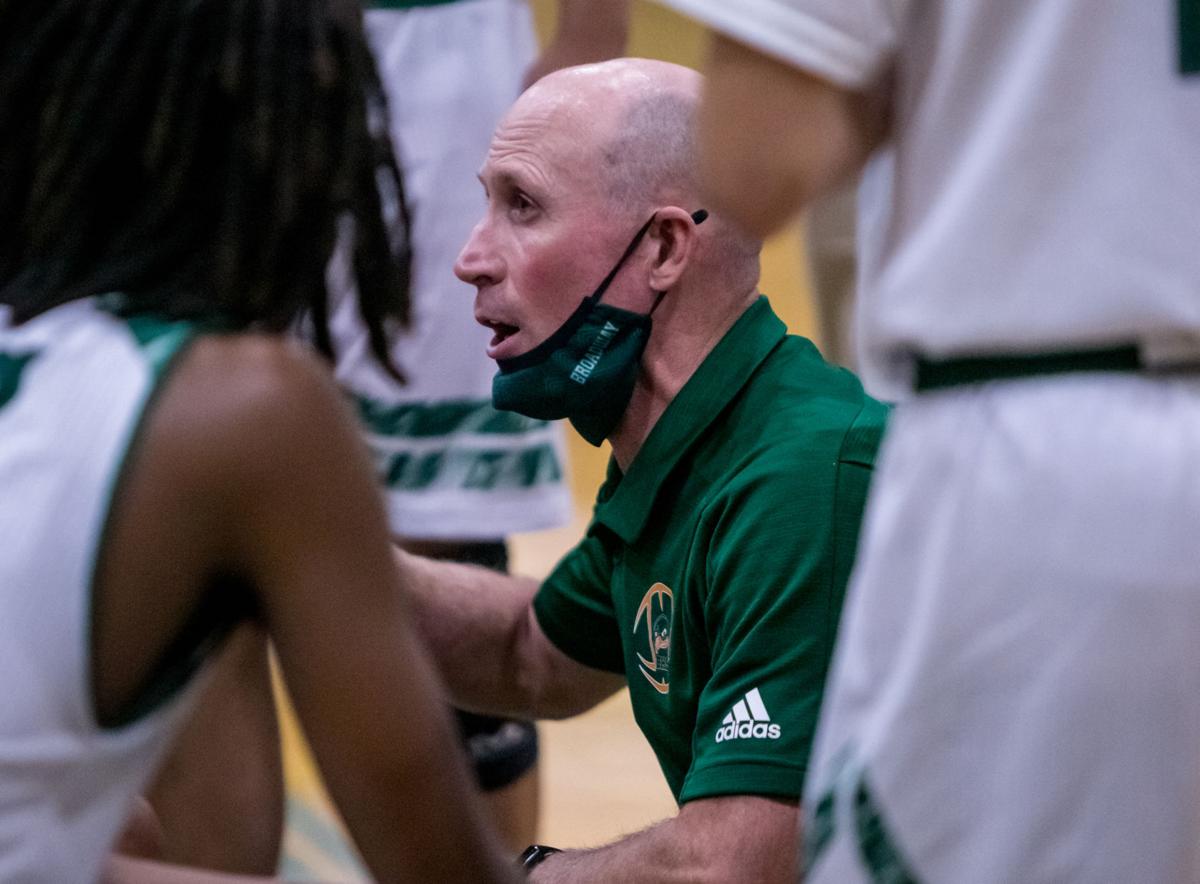 Broadway head coach Dwight Walton talks with his team at the end of the first quarter.

Broadway's Conner Barnes goes up for a shot past the Eastern Mennonite defense.

Broadway head coach Dwight Walton talks with his team at the end of the first quarter.

BROADWAY — There was a moment before the season where Broadway coach Dwight Walton sat and talked with his assistants and admitted he asked, “Where are we getting our scoring?”

The Gobblers have had to replace a number of key players in recent seasons. Standout guards Jaxson Jameson and Caleb Williams graduated prior to last season. Then, after a condensed 2020-21 campaign, Broadway said goodbye to leaders Nate Tinnell and Gage Williford.

That left more questions than answers for the Gobblers coaching staff coming into the season.

“For me, one of the most important things in high school basketball is do you have a team that’s going to get along?” Walton said. “Will they play hard for each other? They’ll do that. They’ve been together for a good while, they know each other. They get along really well, play hard for each other and for us, as coaches, every night. I think that’s a piece I didn’t have to worry about.”

So far, Walton has had more to smile about with the Broadway boys basketball team than worry.

The Gobblers have won seven of their first nine games this season, leaning on a gritty defensive effort and balanced scoring on the offensive end to get off to one of their best starts in recent years.

“We’re all great friends, all know how each other play and how we all work together,” Broadway senior forward Conner Barnes said. “It’s been a lot easier. We’re all really close, all grew up together. We have a lot of chemistry, a tight bond. We’re able to go out there and just play ball.”

The Gobblers have a veteran roster, but a lot of new names on the area scene because of the limited amount of time they’ve had at the varsity level. During last season’s condensed season under COVID-19 guidelines, Broadway was only able to play five games due to an early outbreak.

“We were hype to get back on the floor and play with these guys,” said Caleb Barnes, a senior guard and the brother of Conner. “We were pumped for this season. So far, we’re playing well. We’re working hard, bringing a lot of energy. We haven’t skipped a beat. Everything is clicking right now.”

There’s also five juniors on the roster and only one sophomore in 5-foot-8 guard Conner Michael.

“We came into the season really hungry after not having much last year,” Witmer said. “We’ve just had a lot more time to be in the gym, build chemistry, get reps we didn’t get last year. … Each one of us knows that we all have each others’ backs. If anything happens, we’re there for each other. When you step on the court and have that brotherhood, it makes you want to play even harder.”

During Caleb Barnes’ freshman year in 2019-20, he recalled the JV team going 18-3 that season. The majority of that roster is now what makes up most of the varsity squad for Broadway this year.

That bond that started years ago is what Walton said has helped the Gobblers during their fast start.

“We’ve been in a lot of close games and I think them staying together, not pointing fingers, just staying locked in got us through,” Walton said. “We, by no means, are playing our best basketball right now. We’re showing, like everybody, glimpses of where we could be. We’re really pleased with ourselves on the defensive side. It’s easier if you’re willing to work like this group. Watching us getting better every day and closing that gap has been rewarding because of this group’s hard work.”

Conner Barnes has been the surprise leader on offense this season. The athletic forward has always been known for his leaping ability and willingness to do the dirty work, but he’s done more this year.

“He just works, man,” Walton said. “He outworks people, runs the floor hard. He’s hard to keep from not scoring. He’s a workhorse and bangs and beats and is relentless. He’s done a little more scoring than I thought he would, but it’s been really nice to see that.”

But it isn’t just Barnes that has stepped into a different, unique role this season under change.

Jowell Gonzalez Santiago, a junior guard, has had big scoring nights. Ben Hutcheson and Dakota Dove are emerging as consistent shooters from 3-point range and Caleb Barnes is growing more comfortable with what the coaches are asking him to do, which is shoot the ball more often.

“We’re all about that unselfishness,” Conner Barnes said. “Coach gets mad, sometimes, for us not shooting enough. We try to find the hot hand. It could be any of us. We support whoever is playing well. We are just always trying to play our best as a team and do what we do.”

There were a lot of questions around Broadway entering this season after a tumultuous 2020-21.

But nine games in, with confidence growing and improvement showing, answers are being found.

“We have a really deep roster this year,” Witmer said. “Based on different matchups and different opponents, I think [Walton] feels comfortable putting any of us out on the floor. Anyone can step out and get the job done.”