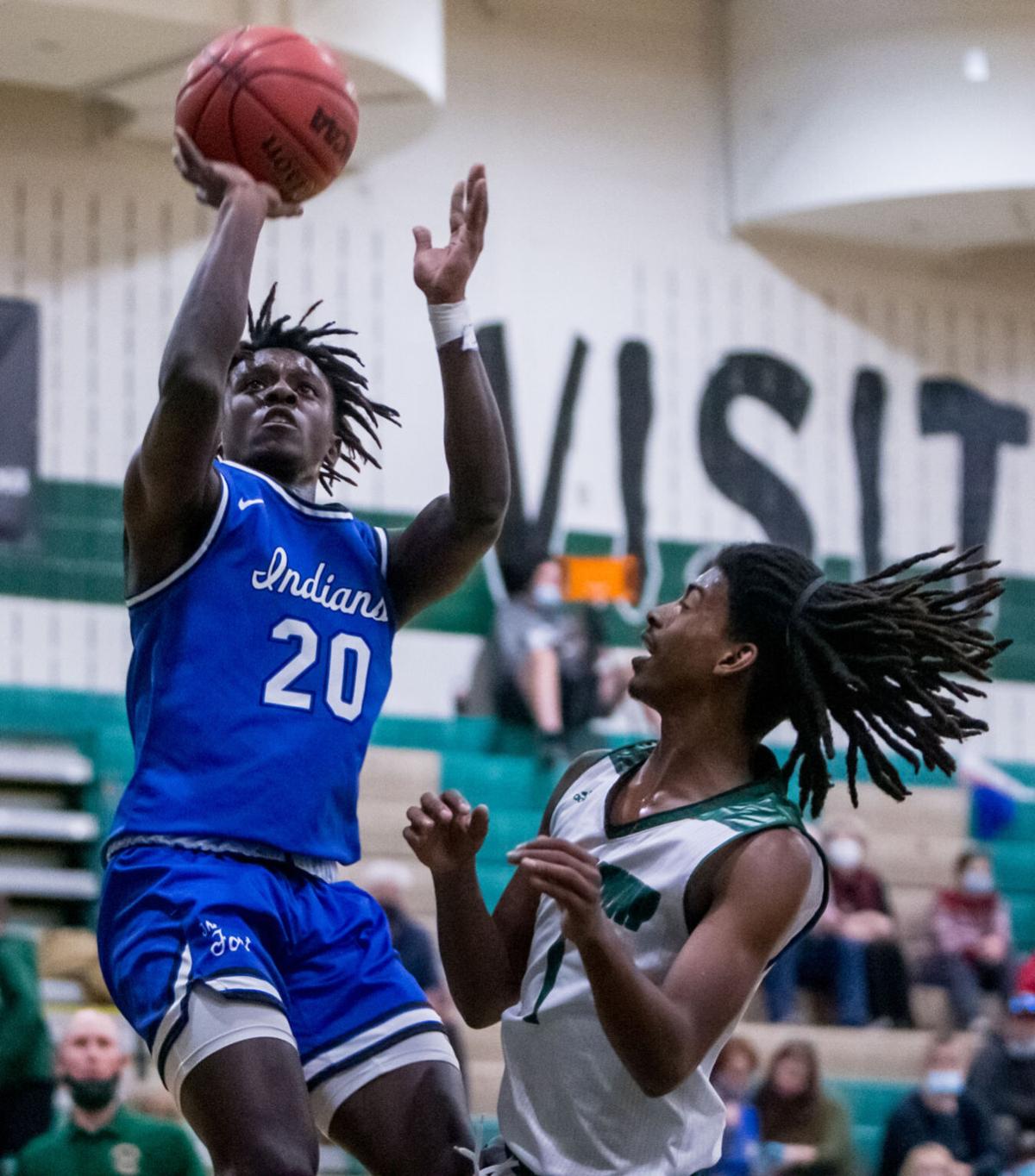 Fort Defiance’s Tyreek Veney goes up for a shot around Broadway’s Caleb Barnes during a game at BHS on Dec. 14. Veney finished with a career-high 28 points in the loss, which came just four nights after his father, Sam, passed away. Tyreek is averaging 23 points per game. 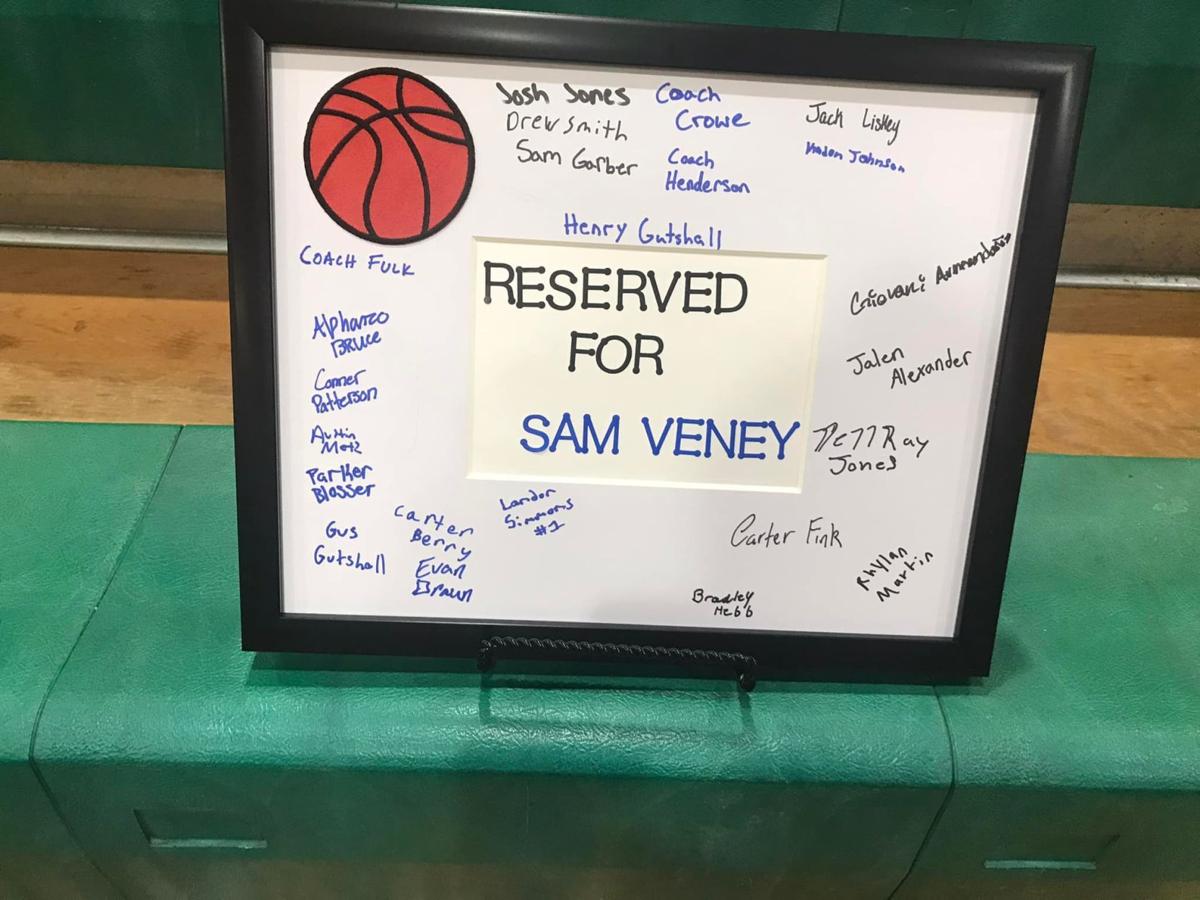 A plaque to remember Sam Veney, the father of Fort Defiance guard Tyreek Veney, sits in the stands at Broadway High School on Dec. 14. Sam Veney is a former Indians standout and avid support of the current team, who passed away unexpectedly on Dec. 10. 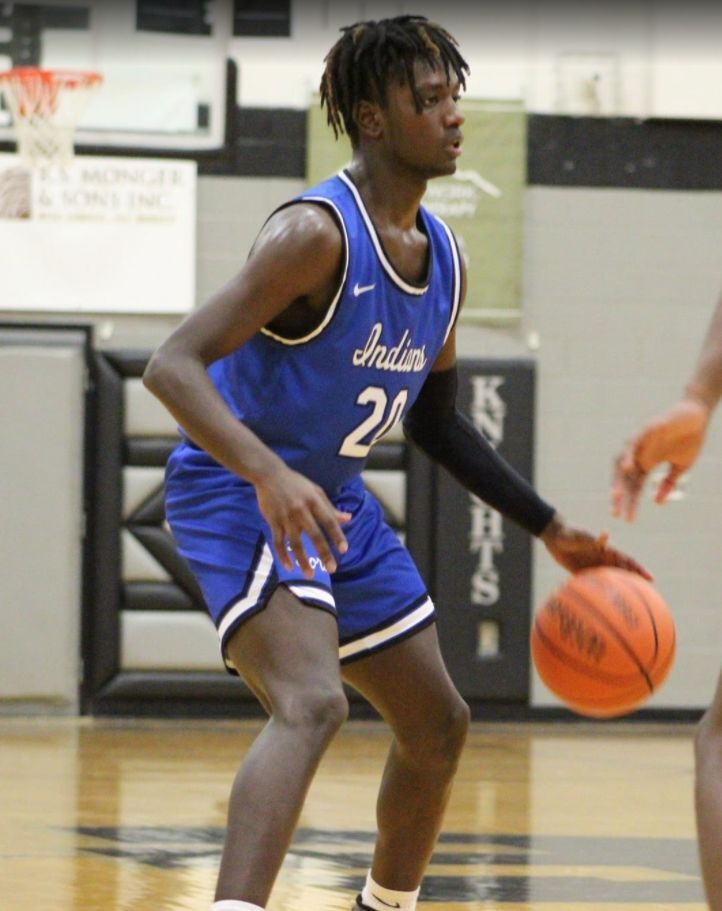 Fort Defiance guard Tyreek Veney looks through the Turner Ashby defense during a game in Bridgewater earlier this season.

Fort Defiance’s Tyreek Veney goes up for a shot around Broadway’s Caleb Barnes during a game at BHS on Dec. 14. Veney finished with a career-high 28 points in the loss, which came just four nights after his father, Sam, passed away. Tyreek is averaging 23 points per game.

A plaque to remember Sam Veney, the father of Fort Defiance guard Tyreek Veney, sits in the stands at Broadway High School on Dec. 14. Sam Veney is a former Indians standout and avid support of the current team, who passed away unexpectedly on Dec. 10.

Fort Defiance guard Tyreek Veney looks through the Turner Ashby defense during a game in Bridgewater earlier this season.

FORT DEFIANCE — With the news fresh on his mind, Tyreek Veney went to what he calls his sanctuary.

The basketball court is where Tyreek Veney, a junior guard at Fort Defiance, built a bond with his father, Sam Veney, who was a standout player for the Indians in his own right from 1992-1995.

“All he wanted me to do was play college basketball, have a good season,” Tyreek Veney said.

On Dec. 10, Sam Veney unexpectedly passed away at his home in Verona at the age of 44.

That night, Tyreek scored 26 points as Fort earned its first win of the season with a 66-56 non-district victory over Monticello. By the time he arrived back to FDHS on the team bus, the heartbreaking news had been relayed to him.

“Initially, we just wanted to have a presence with him,” Indians coach Brandon Fulk said. “At different times, certainly in those first few days, we had different people surrounding him. I wanted to honor him with how he felt. It’s been an adjustment for all of us. As a coach, there’s not a page in the manual on how to deal with a situation like we’ve faced these past couple of weeks. I’ve been amazed with how he handled it and how the group, our team, has surrounded him. I’ve been amazed how our community and extended basketball family has wrapped their arms around Tyreek.”

Sam Veney was a regular at Indians games over the years, often rocking a New York Yankees flat-bill hat and enthusiastically cheering on the team throughout games at home and on the road.

For Sam, who averaged 16.4 points and 5.2 assists per game as a senior in 1994-95 and was a first-team All-Valley District selection, Tyreek was an extension of him on the court.

“He’s been very consistent for us in terms of production,” Fulk said of Tyreek. “He has some areas he wants to improve on, but he’s the centerpiece for us. I was a bit worried through the summer because he struggled a little bit with that role but since the season has started, he’s done a fantastic job in that role.”

Sam Veney was known for his slick ability on the court, knocking down 30 3-pointers as a senior.

“He’s just so explosive,” veteran Spotswood boys basketball coach Jim Kramer told the Daily News-Record about Sam Veney in 1995. “He can truly score 20 in any given half.”

The same could be said for Tyreek, who broke onto the scene as an All-Shenandoah District selection last year as the secondary scorer beside guard Ryan Cook, who graduated and now plays baseball at James Madison.

“I think last year I was more of the second guy, different role with Ryan,” Tyreek said. “This year, I’ve gotten a lot more comfortable with taking more shots and being the main guy on the team. I feel like I could have played better early on this year, but it’s all good now. We’re playing better.”

In 13 games for the Indians as a sophomore, Tyreek averaged 13.2 points and 1.2 assists per game. As a junior, he’s averaging 23 points, five rebounds and shooting 48% from the field.

“Tyreek is one of the important leaders on our team,” Fort junior forward Henry Gutshall said. “Tyreek is the type of guy who puts a hand out to help someone get off the ground. He’s a great all-around player and is incredible on the offensive side. He’s really good at finishing at the rim and he can also shoot exceptionally well. I think he’s best when he can get out in transition.”

Gutshall is part of a talented junior class for the Indians that grew up around Sam Veney.

While they tried to provide support for Tyreek following the loss, players admitted that it was difficult for them as well.

“I consider [Tyreek] to be one of my brothers,” Fort guard Kaden Johnson said. “His dad, Sam, coached me in football and basketball up until I started playing JV and our families remained close as me and Tyreek went through high school sports. After Sam’s passing, I think our team definitely got closer. He pushed our team a lot from the stands and through Tyreek, so we have to make up for that as a team. Tyreek is like a brother to everybody on the team so we’re all doing everything we can going forward to support him, his basketball career and his family.”

Sam Veney’s presence in the Fort community was felt as he coached many of the current players on the varsity roster throughout their elementary and middle school years. Gutshall said he has fond memories of exchanging routine high-fives with Sam Veney following AAU games as a kid.

“Our team is very tight-knit,” Gutshall said. “It hurts that I’ll never be able to experience [Sam Veney’s] kind and joyful presence again, but I know that he is smiling down on us.”

Even before Sam’s passing, Fulk had started to build a special off-the-court relationship with Tyreek.

The Indians coach often picked up the standout guard before school and gave him a ride to practice.

“I remember watching him play in middle school and he didn’t hesitate to come up and introduce himself,” Fulk said. “The kid is almost always smiling. One of my favorite things is picking him up before school and taking him to practice. He’s so much fun to coach and be around. His teammates love him. He’s contagious, loves the game. He’s put more time in the gym by himself than any kid I’ve had. He’s putting the time in to make himself as good as he can be. He’s a special kid, for sure.”

Just four days after the passing of Sam, the Indians had an away game scheduled at Broadway.

Fulk said he wasn’t sure if Tyreek would be ready to play, but the junior guard insisted he needed to.

“I tried to just stay focused, not think about it and just be ready to play,” Tyreek said.

That night, although Fort came up short of a win, Tyreek exploded for a career-high 28 points.

Under all the circumstances surrounding the night, including a framed photo from the team to honor his dad’s spot in the stands, Fulk couldn’t help but be in awe at the performance.

“That was easily the best game he’s ever played here,” Fulk said. “The level of peace and how comfortable he was — it was the most comfortable I’ve seen him play during his time here. That was amazing, not only from a basketball perspective, but with everything that Tyreek had on his mind and is continuing to process. The way he performed that night was remarkable.”

What is considered extraordinary by most was considered another solid night for Tyreek Veney.

With wins in three of the last four games, the 6-foot guard said he’s just focused on winning with his teammates.

“We took a big step forward, played together as a team recently,” Tyreek said. “[A win over Rockbridge County on Dec. 21] was our best team win, I think, that we’ve ever had. I’m happy about that. Everyone is getting more comfortable. I’m just being a good role model, making the right decisions. I ask them if they need help with anything. I feel like I’ve been doing a pretty good job of that.”

Tyreek said his biggest priority right now, beyond the team success, is playing basketball at the college level. With another year left of high school and a growing reputation as a prolific scorer, that certainly seems in reach.

“It’s a big goal of mine,” Tyreek said. “I’m working hard every day to try to reach it.”

Playing basketball in college was something Tyreek said him and his father, Sam, talked about often.

Of course, that’s no surprise considering how special of a bond the two built around the game itself.

That’s why, through the tears and frustration of losing his biggest fan, Tyreek Veney insists that his sole motivation when he steps on the court each night remains making his father proud.

“I’m just trying to put my mind to it and focus on it and make it happen,” Tyreek said. “It’s all for him.”