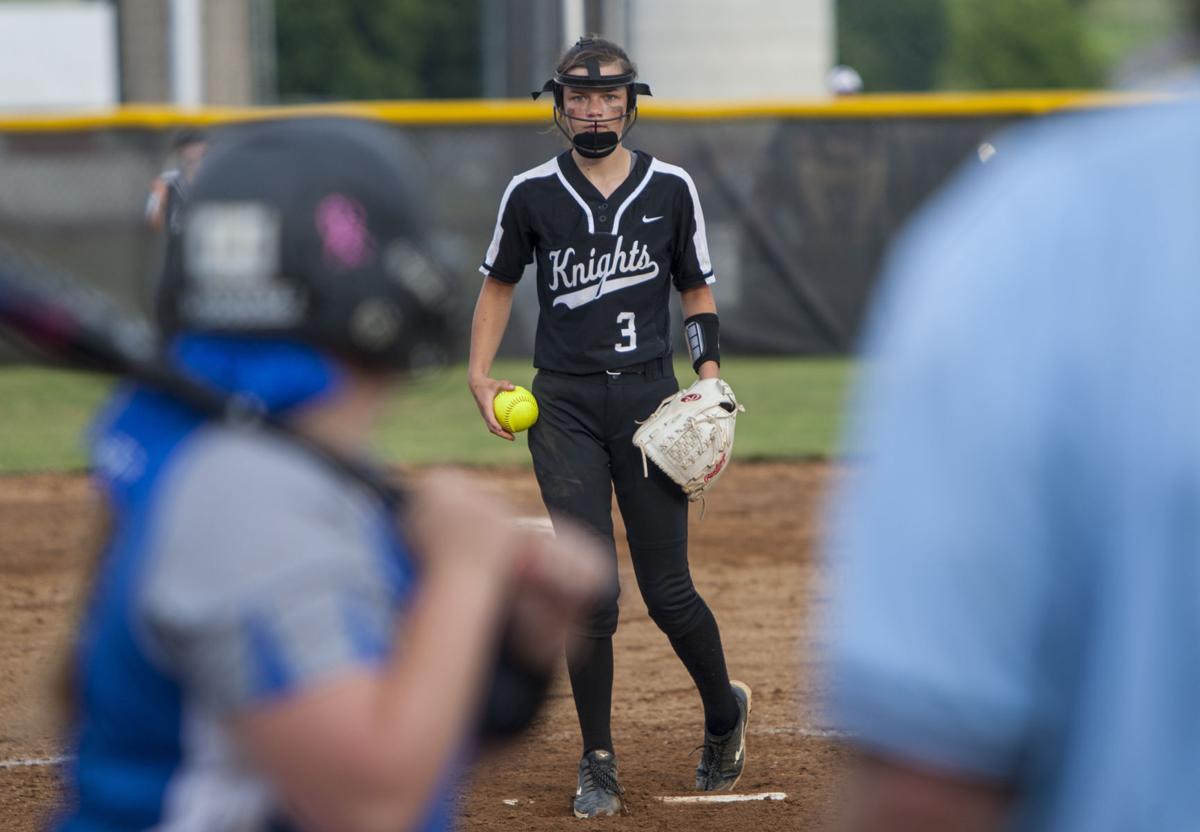 Turner Ashby's Haley Lambert eyes up her next pitch to Spotswood during the Valley District softball championship in Bridgewater on Thursday. 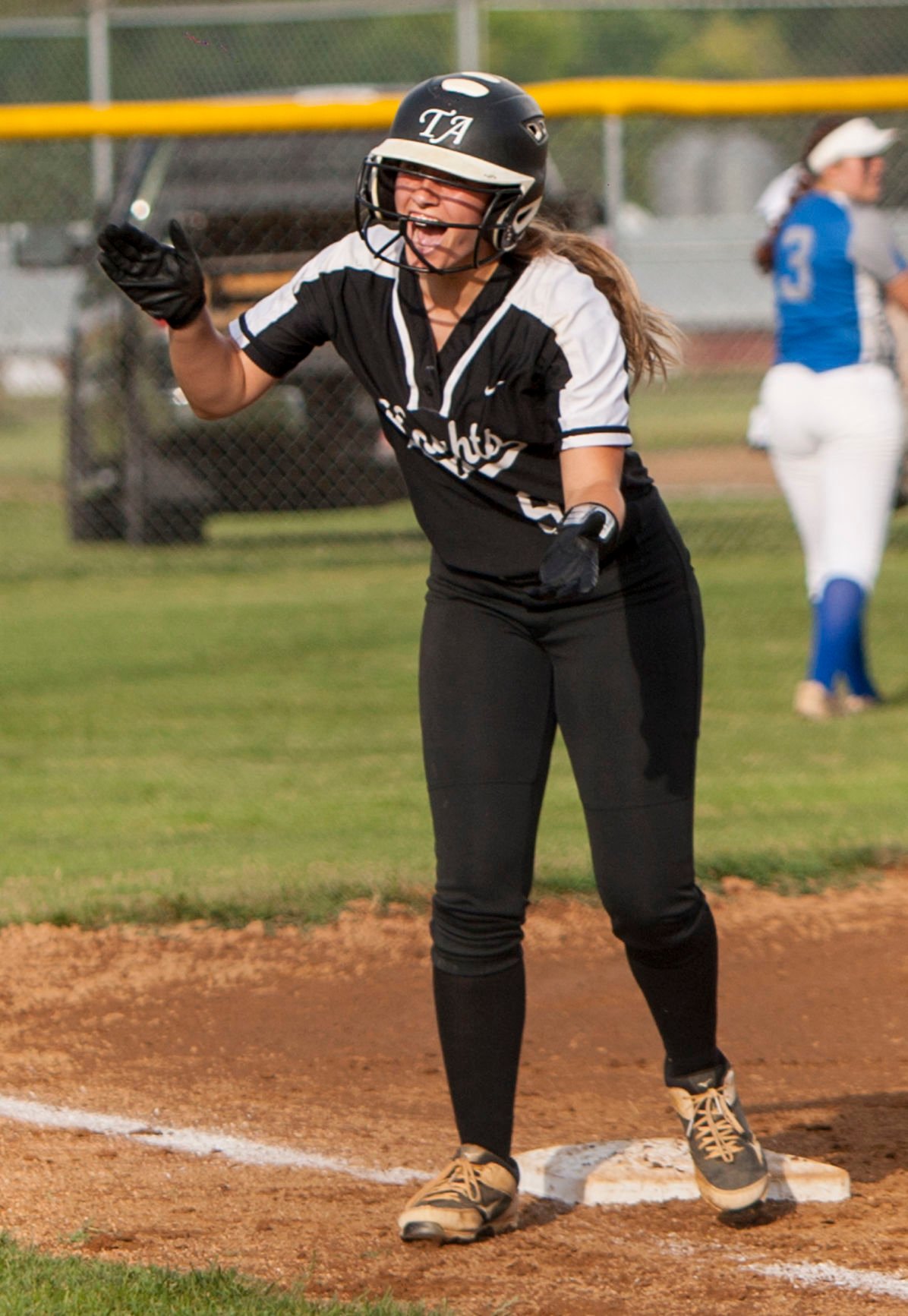 Turner Ashby's Syndey Lyons celebrates after arriving at third base safely during the Valley District softball championship in Bridgewater on Thursday. 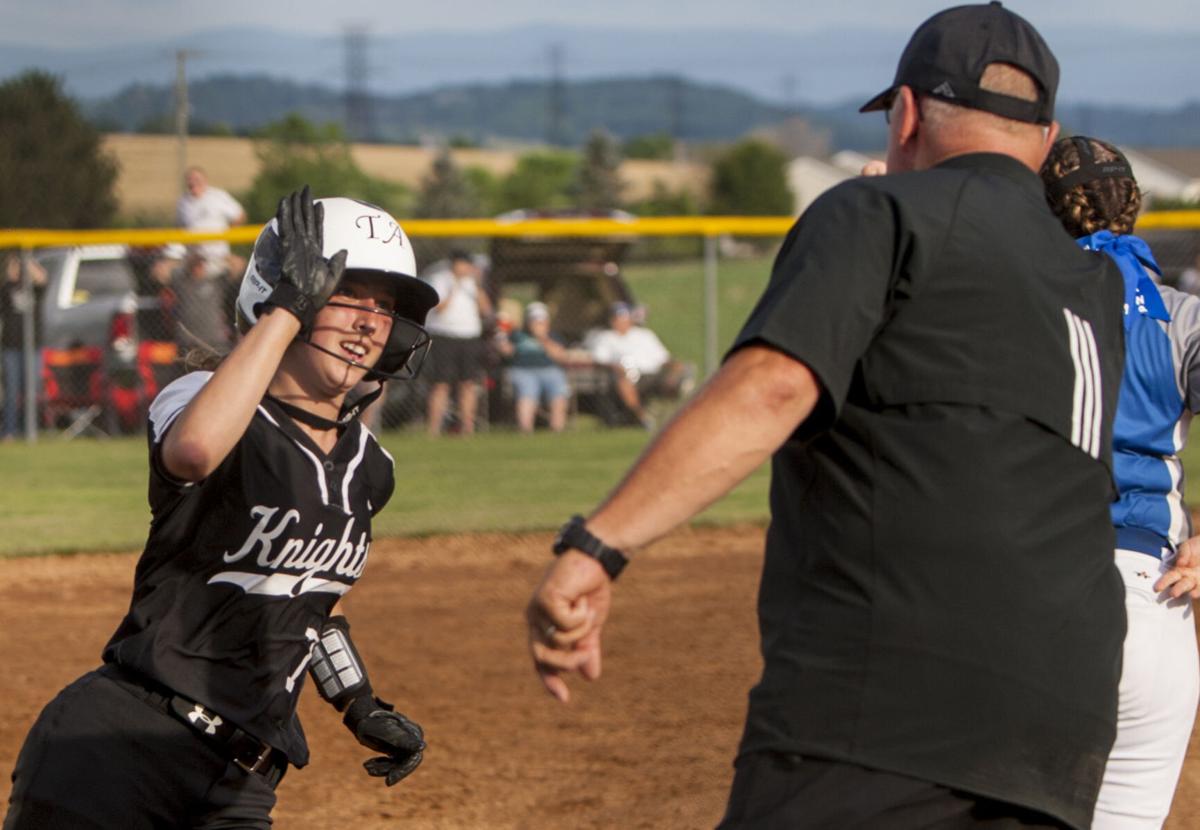 Turner Ashby's Haley Lambert eyes up her next pitch to Spotswood during the Valley District softball championship in Bridgewater on Thursday.

Turner Ashby's Syndey Lyons celebrates after arriving at third base safely during the Valley District softball championship in Bridgewater on Thursday.

BRIDGEWATER — It was comparable to that first conversation with your parents about taking on the responsibility of watching the younger sibling.

Gracie Moyers said she wasn’t sure whether she would take on a role as more of a big sister this season for Turner Ashby softball or, perhaps, even a babysitter.

“Honestly, at first, I did not know how this was going to go,” the shortstop Moyers said with a laugh. “Me, as a person. I’m not always the loudest and I’m really not always the most vocal. They’ve told me to take on that role, though. Sidney [Lyons] and Taylor [Adams] and a lot of the juniors have stepped up and they’ve helped me to lead the team. That’s helped a lot.”

Moyers and the young, top-seeded Knights jumped out to a seven-run lead in the opening frame and never looked back en route to a 13-2 rout of second-seeded Spotswood in the Valley District championship at TAHS.

The game was originally slated to be played at Harrisonburg High School as part of the annual Valley District Jubilee, but after a hard storm rolled through an hour before the scheduled first pitch, the game was moved to Bridgewater. The Valley District baseball championship between Broadway and Spotswood was cancelled due to unplayable field conditions, however.

“I’ll be honest with you,” Turner Ashby coach Clint Curry said. “We were only supposed to play .500 ball this year. Anything above that, I take as a plus and quite an accomplishment on our part. I’m so proud of our girls. … We have a very young team with one senior. When we hit and we play our glove, though, we’ll play with anybody. That’s just the bottom line.”

There’s no doubt the Knights have exceeded expectations this year with Moyers serving as the team’s lone senior and four freshmen seeing significant playing time throughout the course of the regular season.

At various points this year, it was Lily Moyers coming up with big pitching performances, Kendall Simmer hitting homers or Harleigh Propst making diving play after diving play at the first-base position for Turner Ashby.

All of those freshmen have impressed, but it was the soft-spoken Haley Lambert coming up clutch in the Knights’ biggest game of the season.

“I felt pretty good warming up, so I wasn’t that nervous,” said Lambert, who started in the circle for TA. “It’s nerve-racking, though, coming into a big game like this and not pitching much during the regular season.”

Any nerves Lambert may have had were loosened by a seven-run first inning that included a two-run single from Lyons, a bases-loaded walk to Lily Moyers, a two-run double from Katelyn Nazelrod, a double from Eva Ochoa and an RBI bloop single from Gracie Moyers.

“It made me excited,” Lambert said of the Knights’ fast start. “It was nice to see me actually pitch to my full potential. I know I’ve been able to do better at times before, but I felt like I really did my best tonight.”

From there, Turner Ashby was never threatened and Lambert was able to settle into her groove as she tossed a complete game, giving up just two runs on four hits and a walk while striking out one batter in the process.

“Haley was huge,” Curry said. “I wanted to give them a different look, change things up. That’s what happens when our girls come to play. We have great talent. They can hit it, but they have to believe in themselves. I’ve been trying to tell them all year that I believe it, I see it and I recognize talent. I know it’s there. We just have to get it out of them.”

The Trailblazers, who shared the co-champion title for the regular season with the Knights, never recovered after the rough opening frame as standout pitcher Kaitlyn Fletcher was pulled before the inning even ended.

Fletcher, dealt with a back injury prior to the contest even starting, and was visibly in pain even after she was pulled from the contest on Thursday.

“Katie was struggling from the beginning,” SHS coach Brooke Hensley said. “Even while warming up, she was almost in tears out there. You can’t give a good team more than three outs an inning. We just didn’t look like we came out to play. They definitely took advantage and we kind of folded.”

Adams was 3-for-4 with a homer and two RBIs for the Knights (12-2) while Lyons was 2-for-4 with a home run and three RBIs of her own. Simmers had two hits while Gracie Moyers and Makenzie Cyzick each had an RBI.

“In our previous games, we’ve been coming out really flat,” Gracie Moyers said. “That’s been a problem for us. Our coaches have been preaching to us to come out on top, start with the same energy we end the game with. … We just came out with a completely different energy in the first inning.”

Brooke Morris was 2-for-3 with a double and an RBI for the Trailblazers (12-3) while Ciera Rodriguez and Nicole Workman had a hit apiece.

Spotswood is likely to host a first-round regional home game on Monday.

“We have to shake this off, Hensley said. “It’s in the past now and, looking forward, anything can happen in the playoffs. We just have to keep moving on, work hard in practice and get back out there on Monday.”

The Knights, too, will host a Region 3C playoff game as either the No. 2 or No. 3 seed on Monday. Their opponent will be determined sometime today.

The last time Turner Ashby played in a postseason, it made a run to the Virginia High School League Class 3 state championship game in 2019.

Despite their youth this year, Curry said he wouldn’t mind a similar run.

“I told them to enjoy the moment, but we have to go to work tomorrow,” Curry said. “We’ve been on this stage, know what it takes to go on. We try not to look too far ahead. We take it one game at a time. … I’m going to tell you straight up, though. I know we’re young and a lot of people count us out but if we keep our bats going, play good [defense] and our pitching gets ground balls, we can make a good run. I’m telling you.”

Moyers was on the state runner-up team in 2019 as the nifty, quick-handed shortstop that surprised folks despite her inexperience and size.

The senior admitted she may have felt like an older sibling taking on a responsibility that wasn’t all that wanted when the season began.

After Thursday’s win, however, her smile resembled one of a proud parent.

“It means so much,” Moyers said. “These girls have honestly worked so hard. The freshmen have stepped up in huge situations. All of those young people have stepped up.