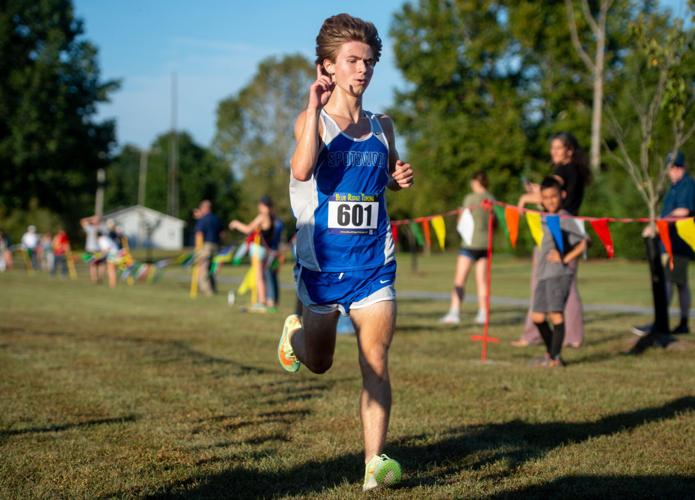 Spotswood's Russell Kramer celebrates as he wins the boys race. The boys race gets off to a start.

Spotswood's Russell Kramer celebrates as he wins the boys race.

The boys race gets off to a start.

GROTTOES — It was smooth sailing for Spotswood junior Taylor Myers on Wednesday.

The 2021-22 Daily News-Record All-Valley Girls Cross Country Runner of the Year coasted to a first-place finish in the girls varsity race with a time of 19:09 at the City/County Cross Country Championships at Grottoes Town Park.

“My plan was to go out hard and maintain the lead,” Myers said. “I like this course a lot. It’s our home course, so I really like it because it’s flat.”

Myers finished over a minute ahead of second-place Annie Poirot from Harrisonburg, who finished with a time of 20:30. The senior finished seven seconds ahead of her HHS teammate, junior Lena Blagg. Poirot believes it definitely helped to race near someone she calls one of her best friends.

“I think we both push ourselves and when I feel her on my shoulder, we both just run faster and it’s really fun,” Poirot said.

Myers said other than the heat, she felt comfortable the entire race and was focused on getting the win. When she gets out to a big lead, she maintains focus and concentrates on executing her race strategy.

For Poirot, she felt she struggled around the 1.5-2 mile mark of the race but once she saw the finish line, she was feeling good. She likes the Grottoes course but said it can be mentally challenging.

“I really like how it’s flat and honestly kind of like a racetrack,” Poirot said. “I think it’s a hard course mentally since it’s flat and there’s no obstacles that you can push yourself to.”

Spotswood’s Ashland and Marika Dickel finished fourth and fifth overall, only separated by .07 seconds. Other top girl finishers included Spotswood’s Anna Dabaghyan and Kate Ruebke with times of 21:40 and 22:02, respectively. Spotswood won overall with 23 points with Harrisonburg in second (35) and Turner Ashby (72) third.

For the boys, Spotswood senior Russell Kramer grabbed first place with a time of 17:11. Second place saw Broadway’s Tristan Yoder pass Harrisonburg’s Andrew McMichael on the last stretch for the position. Yoder finished with a time of 17:23 while McMichael finished at 17:25.

“I was just using my adrenaline and I was able to push through and beat him slightly,” Yoder said.

Kramer said he knew going into the race his seed time was a minute better than everyone else. His strategy was to stick with the other guys through two miles, pull away and put distance between them.

“The course, I’ve been running on it for a few years now,” Kramer said. “I’ve always sort of liked it, but it can get tough with lack of shade in some spots.”

The Spotswood boys won with 34 points with Harrisonburg in second (47) and East Rock third (76).

Yoder said the frontrunners were able to push him and he was excited at how the Gobblers performed.

Kramer said he was trying to encourage his teammates to stay towards the front to win. He said having his teammates, including his brother — sophomore Troy Kramer — around to cheer everyone on is a positive for the Blazers.

“Even with the girls team, we’re all pretty close this year because we don’t have a very big team,” Kramer said.