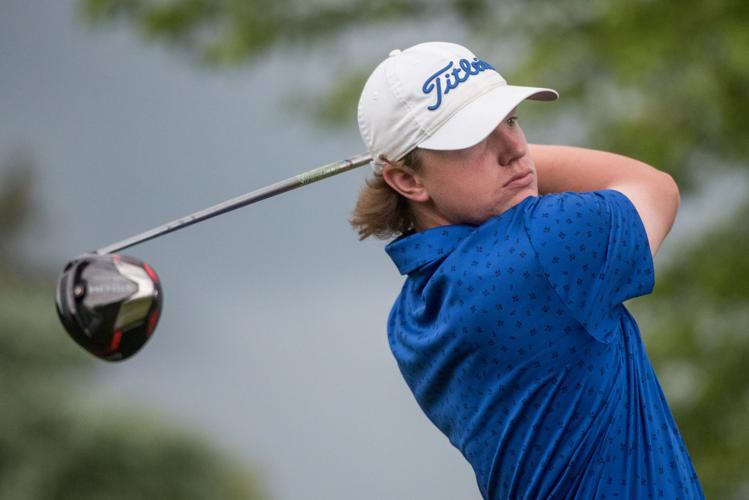 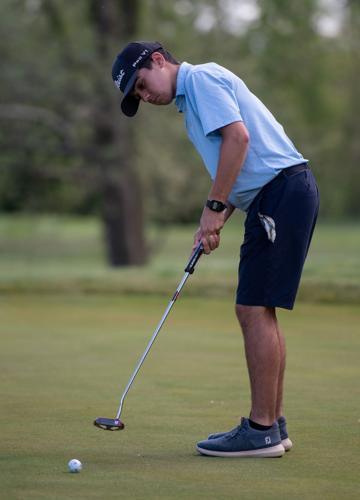 It was somewhat of a relief for Adam Hatter.

As the Eastern Mennonite senior celebrated with teammates and coaches Monday at Meadowbrook Country Club in Chesterfield, he couldn’t help but make a witty comment about the situation.

“It’s nice that I don’t need another ring fitting since I already know my size,” Hatter said.

Hatter was, of course, referencing when he earned a championship ring after winning the Virginia Independent Schools Athletic Association Division III boys basketball state title back in March as a standout point guard for the team.

Turns out, another finger will be occupied for Hatter after the Flames shot a 312 and won a last-resort tiebreaker to defeat Veritas School for the VISAA D-III golf championship on Monday.

“I am so proud of this group,” EMS coach Chris Slonaker said. “Not just the six golfers today, but our eight-man team and our very supportive parents and grandparents and siblings who came out to a lot of matches, including today. We always say any one shot can make the difference. That proved so true today.”

The Flames were tied with Veritas at 312 through the teams’ top four golfers, which is what typically counts toward the scorecard.

But the tiebreaker for such a situation was a fifth score.

“So many emotions were going through our minds as the final groups came in,” Hatter said. “We had no idea whether we did it or not until the very last group.”

Coincidentally, Eastern Mennonite’s Drew Hatter and Veritas’ Danielle Kenny both shot a 15-over-par 86 to tie there, too.

That’s when the final tiebreaker was revealed and the Flames learned they would rely on their sixth, and final, score of the day to determine the winner. Andrew Lantz, who shot an 89, had outperformed Veritas’ Mark Gahagan (96) and that proved to be the difference as EMS was declared the team champion.

“The only thing I have to say is that I’m just so happy right now,” Lantz said. “It feels so good to win, especially after the roller coaster of emotions while all the scores were coming in.”

It wasn’t just Eastern Mennonite bringing home its first-ever state title as a team that highlighted the day, though, as it was also a historic performance for standout sophomore Ryan Slonaker.

“I’m so proud of this team,” Ryan Slonaker said. “I mentioned before that we’re extremely deep all the way to our sixth guy and beyond and that showed today. We needed all six to do it. Winning by a tie-breaking sixth score makes it even sweeter. We’ve been so focused all year on the details. With the season on the line, focusing on the details is what gave us the edge. It all paid off, and I couldn’t be more excited.”

Last season, Ryan Slonaker joined his older brother, Meade, as the only individual champions in program history. Now, he’s made it back-to-back state wins with more on his to-do list.

“I am proud of how he prepared,” Chris Slonaker said. “Instead of feeling the pressure to repeat, his focus became helping the team score and challenging himself to beat the Division I and II players as well. That aggressive mindset is very helpful in golf.”

Adam Hatter and Grant Pennybacker both carded a 79 for EMS.

“Not even a rain delay can delay progress,” Pennybacker said.

Schuyler Harmison finished fourth with an 85 for the Flames.

“We all could’ve finished better on the last couple holes, but I wouldn’t change the outcome if I could,” the senior leader said. “To win on a tie-breaking fifth and sixth score was poetic justice after coming up just short last year. Two rings in one year is an amazing feeling. Feels better than I could’ve imagined.”

Adam Hatter, Drew Hatter, Slonaker and Harmison were all part of the state-winning boys basketball team just a few months ago.

So as those four celebrated with their golf teammates after multiple years of runner-up finishes, there was a relief at finally finishing the job on the course.

“There’s no better feeling than winning a state championship,” Drew Hatter said. “Lucky enough, I was able to experience that twice”