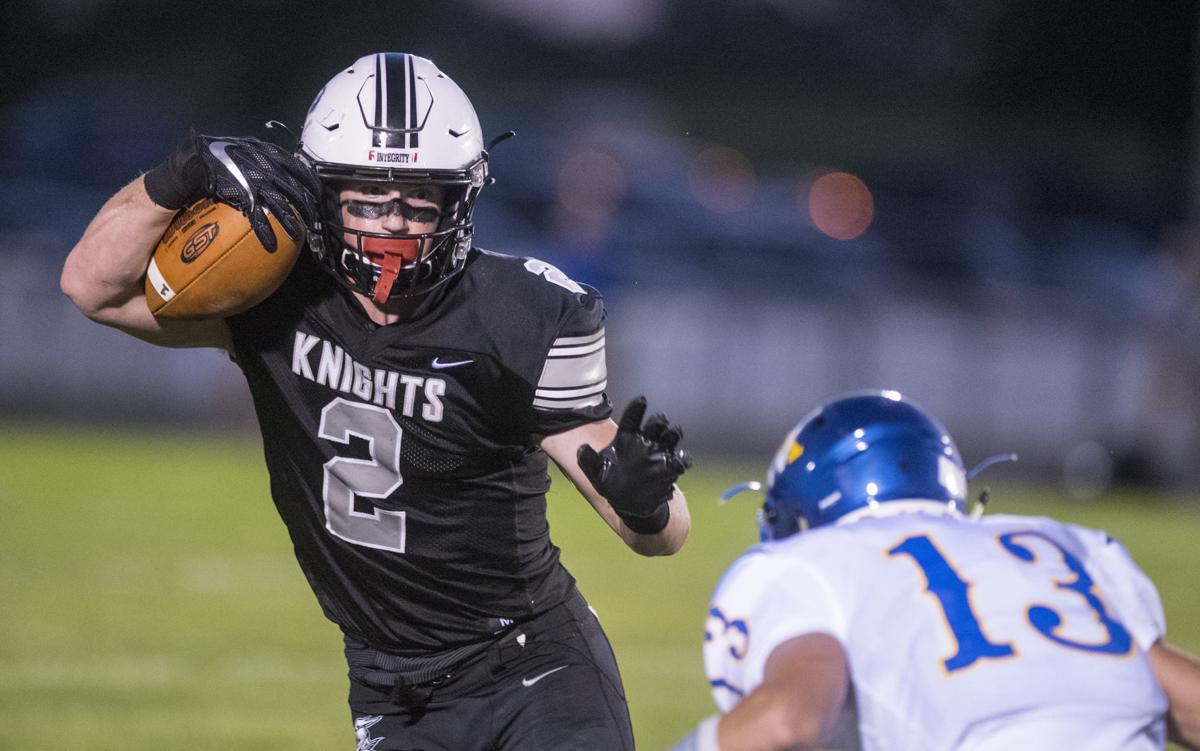 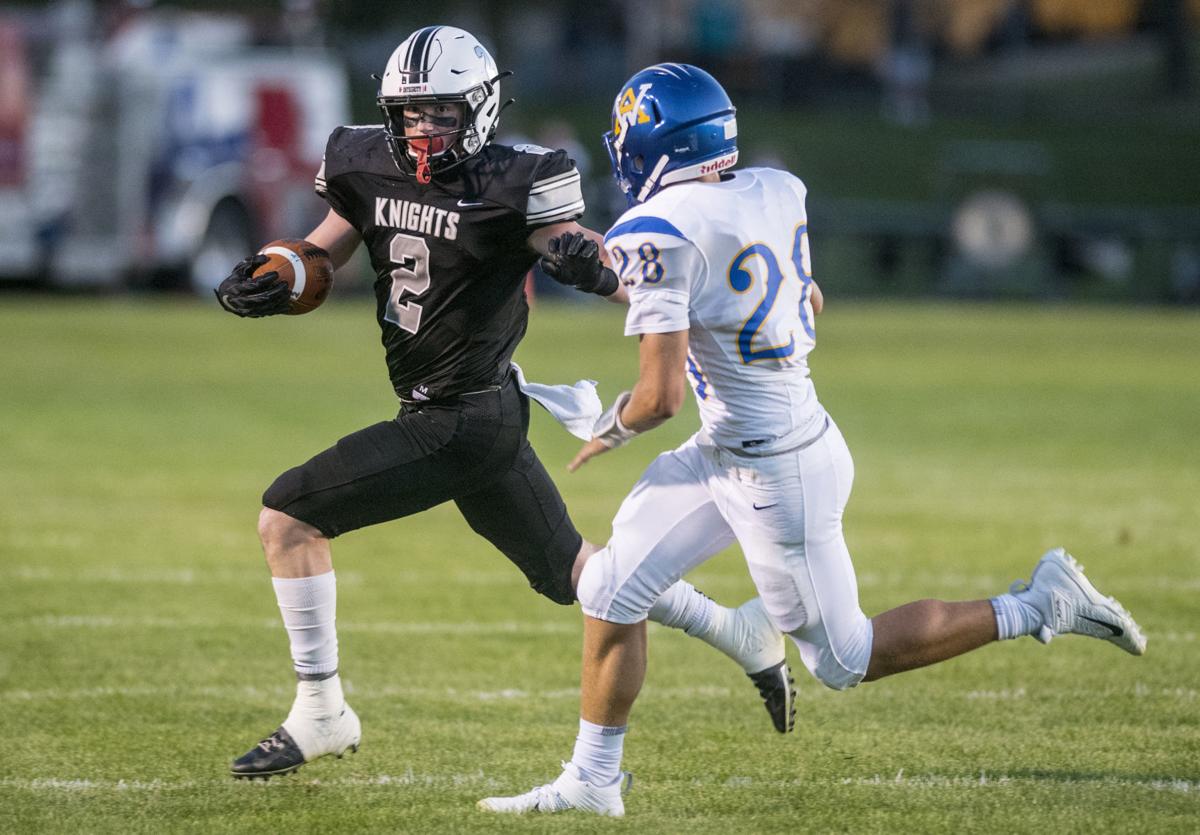 BRIDGEWATER — There’s a lot to like about Grant Swinehart’s game.

The 6-foot, 190-pound running back is the workhorse for a suddenly potent Turner Ashby offense and considered one of the best players in the area at his position.

“He’s very important to our success,” Knights lineman Jessie Knight said. “He’s the guy we need for our offense. He can either run it down your throat and show you he’s more of a man than you are or he can make a move and cut it up field and lose you on the sideline.”

Swinehart has done a little bit of both this season for Turner Ashby, which is off to its best start since 2009 and opens up Valley District play Friday with a rivalry game at home against winless Broadway.

In a 42-21 win over Wilson Memorial last week, Swinehart had a career-high five rushing touchdowns and showcased all the reasons he’s considered an elite running back.

“Grant can score on any play at any given time,” TA quarterback C.J. Haskins said. “For us as an offense, that gives us confidence on every single down because we know we have a back in Grant that’s going to give it his all and make something out of nothing.”

It’s been a solid season for Swinehart through five games, but his last two outings have reminded opposing coaches of the hard-nosed rusher he was a year ago in eight games.

At the end of last season, Swinehart suffered a toe injury that forced him to miss the final two games of the year and then he suffered an ankle injury during the offseason.

That slowed down his offseason work a bit and as a result, TA coach Chris Fraser said he wasn’t fully healthy when the season began and it took a bit to get back to normal.

“I felt pretty good,” Swinehart said. “I put a lot of work in during the offseason. I worked hard all summer and I think that’s helped me get back to the point where I am now.”

Swinehart’s dedication to improving himself as a player is contagious, Fraser said.

“He’s one of our hardest workers,” Fraser said. “He’s a leader. He’s a guy that’s been there for everything, even when he was hurt. Everybody looks up to him. It’s a really good combination. He’s started to become more of a vocal leader, which is good. I think that’s come with maturity and getting older. He accepts that role and it’s been good for him and great for us.”

There hasn’t been any changes made to the Knights offensive game plan the last couple of weeks, Fraser said, but Swinehart has simply stepped up.

“I don’t think anything has really changed drastically,” Swinehart said. “My line and receivers blocked really well and giving me big holes and I’ve just been hitting them.”

Another key is the pieces around him performing well, Fraser said.

Last season, opposing defenses focused a lot of their effort in stopping Swinehart on Friday nights, but with players like Haskins, Jared Peake and Jalin Quintanilla all having strong seasons, defenses have to be aware of multiple weapons.

“Now that defenses know we have two other guys that can carry the ball, can get yards, they can’t focus on Grant,” Fraser said. “Last year, the focus was 100 percent on shutting down Grant. Now you can’t do that. It takes some pressure off of him.”

Swinehart said he has definitely noticed the difference this season.

“It helps a lot,” Swinehart said. “It kind of spreads the wealth around for the rest of my teammates and it’s really opened things up for me and for everybody else.”

It’s not only Swinehart’s efforts on the field that has benefited the Knights, however.

As the humble, soft-spoken captain for Turner Ashby, Swinehart has a strong reputation in the locker room and stays committed to helping the team battle adversity at times.

“Grant is a guy who can keep it light, but at the same time make sure everyone is locked in and focused during practice,” Haskins said. “He’s a guy, both on the field and in the locker room, who leads by example as well as vocally. He’s always one of the first guys to keep everyone up and motivates guys to go back out on the field and win the game.”

That leadership was especially pivotal last week when facing the Green Hornets.

Coming off a 28-27 loss to Staunton on Sept. 21 — the Knights’ first of the season — Turner Ashby desperately needed to rebound with a win and get back on track.

“It was huge for us,” Swinehart said. “I think we kind of lost focus a little bit against Staunton. We got caught up in all of the wins and something we weren’t really used to. I think battling back and getting that win this past week was really big for us.”

As one of three veteran leaders for the Knights, Swinehart said he takes his role seriously and uses his relationships with his teammates to his advantage.

“I try to do both, but I think I’m definitely more of a lead-by-example type of guy,” Swinehart said. “We have more vocal leaders on our team like C.J. and Jessie, but I just try to lead by example and help out in any way that I can.”

Knight said Swinehart’s play on the field speaks for itself and that the senior has earned the respect of his teammates and coaches by his actions through the offseason.

“He’s a tremendous guy,” Knight said. “He’s friends with everybody. He’s one of the leaders who will joke around and have fun, but when it comes time to flip the switch, he’s the first guy to tell you to focus.”

Fraser said he’s fortunate to have a player like Swinehart since he first came to Turner Ashby in 2017 and he’s seen the senior running back get better every season since.

That type of work ethic makes him an elite player at any level, the third-year coach said.

“When you have a young man that’s that big, that strong and that fast, it’s a pretty lethal combination,” Fraser said. “He’s pretty good. I don’t care if it’s this area or any area, he’s a really good high school running back. It’s great for anyone around. His work ethic makes everybody around him better.”

And while there’s certainly a lot to like about Swinehart’s game, it isn’t the individual accolades or stats that the powerful runner is concerned about this season, he said.

After winning just four total games the past two seasons and now sitting at 4-1 entering district play, what Swinehart said he likes the most is simply the taste of winning.

“It’s awesome,” Swinehart said. “It’s completely different than these last two years that I’ve been part of this team and I’m just really proud of everybody. I’m really glad to be winning again.”

Inside The Prep Football Numbers

It was a rough week for a couple of local teams with Broadway and Harrisonburg each suffering lopsided non-district losses to Fort Defiance and Sherando, respectively, while East Rockingham and Turner Ashby both got much-needed victories on Friday.