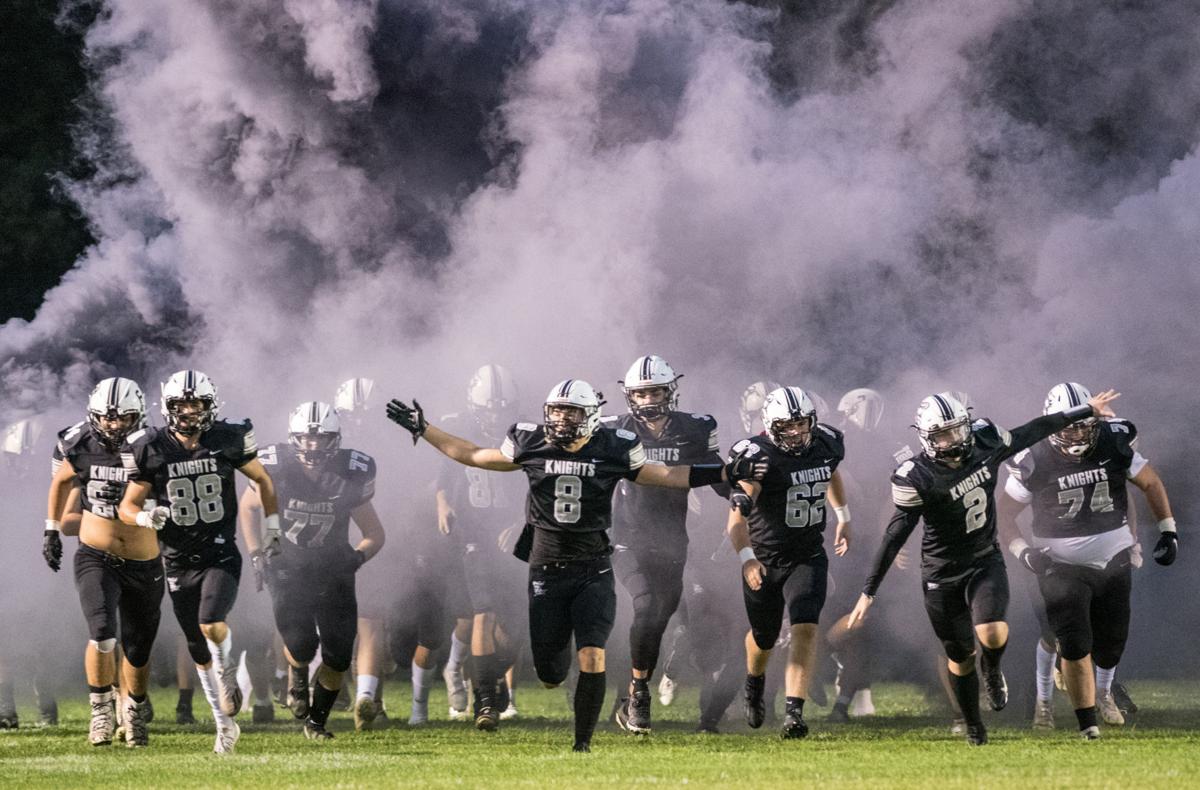 Turner Ashby takes the field at the start of their game against Broadway.

Luray last week: Did not play

Notes: East Rockingham has won eight of its last 10 over Luray. ... The Eagles overcame a 20-point third-quarter deficit in last week's 34-27 victory over Page County. ... East Rockingham is in its first season under coach Scott Turner. ... ERHS quarterback Jakari Eaves if 64-of-102 passing for 595 yards, five touchdowns and three interceptions. ... Eaves, Ben Dinkel and Logan Frye all have over 100 yards rushing for the Eagles. ... East Rock receivers Zachary Joyner, Xavier Butler and Blake Morris all have over 150 yards receiving. ... Luray currently ranks No. 1 in the Region 2B power ratings. ... LHS quarterback Brady Jenkins has 716 total yards and eight touchdowns this season. ...Bulldogs running backs Kenny Frye and Drayvin Stevens have combined for 487 rushing yards and six scores. ... Alex Runyan leads Luray with 25 tackles. ... The Bulldogs haven't had a losing season since 2012. ... Luray has never defeated East Rockingham in Elkton.

Notes: Spotswood has lost 11 of its last 13 overall. ... The Trailblazers are giving up 45.2 points per game in their five losses. ... Spotswood has won five of its last six against Turner Ashby. ... Trailblazers running back Tre Holsapple leads the Valley District with 119 carries for 854 yards and eight touchdowns. ... SHS running backs D.C. Lubin and Noah Burtner have combined for 581 yards and 11 more scores. ... Burtner also leads the Trailblazers with 43 tackles on defense. ... Turner Ashby quarterback Cole Hoover is 33-of-63 passing for 457 yards, three touchdowns and two interceptions this season. ... Knights running back Sam Shickel leads the team with 516 rushing yards and five touchdowns. ... Jalin Quintanilla, Dylan Eppard and Hoover all have at least 110 rushing yards and two scores for TA. ... The Knights are converting on 78 percent of fourth downs this season. ... Eppard and Addison Simmons have combined for 81 tackles at the linebacker position for Turner Ashby. ... Shickel has two interceptions as a defense back for the Knights.

Notes: Harrisonburg has won six in a row over Broadway and seven of the last eight. ... The Blue Streaks are coming off a bye, but posted a 16-0 shutout of Staunton the week before. ... Harrisonburg quarterback Keenan Glago has 622 total yards and four touchdowns this season. ... Blue Streaks running back Aaron McAfee Jr. had 96 carries for 437 yards and two scores. ... The HHS receiving trio of Kris Walker, JJ Engle and Xavier Williams have combined for 21 catches for 317 yards and two scores. ... Alex Spitler leads the Blue Streaks with 50 tackles and a pair of sacks this season. ... Broadway is averaging 282 total yards and 21 points per game this season. ... Gobblers running back Cameron Showalter has 127 carries for 821 yards and 10 touchdowns. ... Broadway quarterback Landen Stuhlmiller has 803 total yards and six scores. ... Brade Smith leads the Gobblers with 17 receptions for 153 yards. ... Linebacker Christian Nicklow leads Broadway with 38 tackles. ... Defensive backs Ben Hutcheson and Coy Thompson have combined for five interceptions for the Gobblers.

Notes: Page County blew a 20-point third-quarter leads in last week's 34-27 loss to East Rockingham. ... Panthers quarterback Hayden Plum missed the fourth quarter of the loss with an injury. ... Page County currently sits in the eighth, and final, playoff spot in the Region 2B power ratings. ... The Panthers are giving up 38.3 points per game in their four losses this season. ... Page County senior running back Blake Turpen had 24 carries for 252 yards and a touchdown in the loss to East Rockingham. ... The Panthers are seeking their third consecutive trip to the postseason. ... Petersburg has lost four straight games since a thrilling season-opening win over Berkeley Springs. ... The Vikings are in their second season under coach Donny Evans. ... Petersburg has only two seniors on its roster in quarterback/safety Cody Nuzum and offensive lineman Levi Alexander. ... This is the first-ever meeting between the two programs. ... The only other local team the Vikings have ever played is Broadway in 1954. ... Petersburg is giving up 34.6 points per game this season.

Notes: Staunton has won nine of its last 11 against Fort Defiance, but dropped two in a row. ... The Storm are being outscored 156-41 during their current four-game losing streak. ... Staunton quarterback Walker Darby leads the Shenandoah District with 802 passing yards, eight touchdowns and five interceptions. ... Storm receiver Bucky Scott leads the district with 17 catches for 455 yards and five scores. ... Staunton running back Malik McKenzie has 68 carries for 312 yards and four touchdowns. ... Storm linebacker Peyton Dunn has 71 tackles, including five for loss, with two forced fumbles, a fumble recovery, two pass breakups and an interception. ... Fort Defiance has committed 13 turnovers this season. ... Indians freshman quarterback Trey Miller has 530 total yards and five touchdowns. ... Fort Defiance running back Riley Miller leads the team with 71 carries for 447 yards and three scores. ... Indians senior Shannon Knicely, who is also the backup quarterback, leads the team in receiving with five catches for 105 yards and a score. ... Fort Defiance is giving up 44.2 points per game in its five losses. ... The Indians have converted just 22 percent on third down this season.

Through the first five games of the season, the run game was relied on heavily for the Turner Ashby offense with the occasional play-action pass sprinkled in.

By The Numbers: Week 7