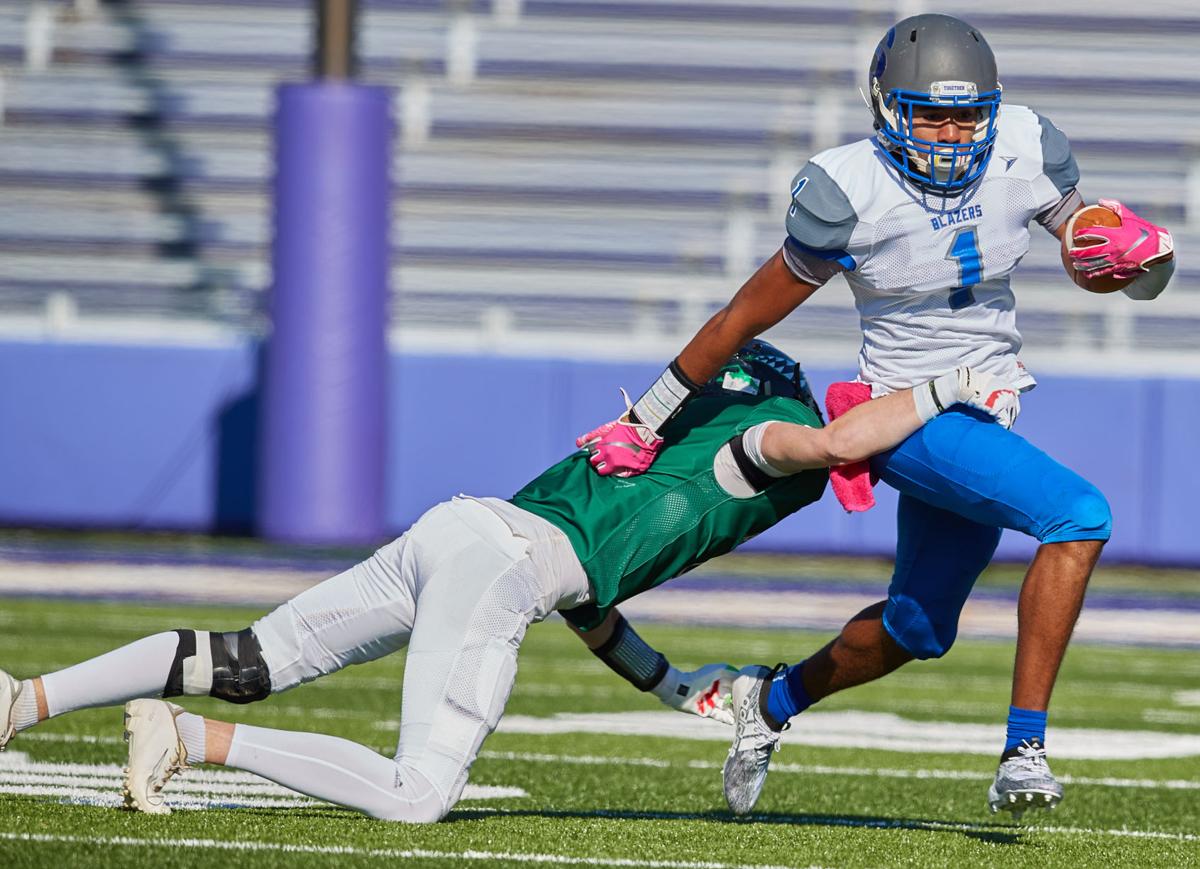 Notes: Harrisonburg has won 14 of the last 18 against Spotswood. … Blue Streaks quarterback Keenan Glago is 78-of-157 passing for 1,173 yards, 20 touchdowns and six interceptions. … HHS senior Kwentin Smiley had 789 yards of total offense and 14 touchdowns. … Harrisonburg receivers Malachi Davis and Jazen Walker have combined for 52 catches for 869 yards and 12 touchdowns. … The Blue Streaks are averaging 37.0 points per game in Valley District play. … This is the fourth straight season that the Harrisonburg-Spotswood game will decide the district champion. … Spotswood won its first district title since 2013 last season. … Trailblazers running back Ethan Barnhart leads the district with 160 carries for 1,768 yards and 20 touchdowns. … SHS quarterback Ryan High has completed 71-of-117 passes for 1,261 yards, 15 touchdowns and three interceptions. … Rob Smith leads Spotswood with 31 catches for 653 yards and eight touchdowns. … The Trailblazers defense is giving up 10.4 points per game. … Spotswood is seeking its first undefeated regular season since 1991.

Notes: Rockbridge County currently sits at No. 4 in the Virginia High School League Region 3C power ratings while Turner Ashby is at No. 5. … RCHS quarterback Miller Jay is 122-of-187 passing for 1,928 yards and 18 touchdowns, but has thrown 13 interceptions. … Wildcats receiver Jailik Lynch leads the Valley District with 48 catches for 983 yards and 10 touchdowns. … Rockbridge running backs Gage Shafer and Bret McClung have combined for 1,042 rushing yards and 22 touchdowns. … The Wildcats are averaging 38 points per game this season. … Rockbridge is seeking its first eight-win season since 2012. … Turner Ashby scored on seven of its first eight plays in last week’s 75-6 dismantling of Waynesboro. … Knights running back Grant Swinehart ranks second in the district with 165 carries for 1,448 yards and 20 touchdowns. … TA quarterback C.J. Haskins has 1,319 total yards and 12 touchdowns this season. … Knights receiver Nico Valle leads the team with 23 catches for 413 yards and four scores. … The Turner Ashby defense is giving up 13.8 points per game in district play. … The Knights have won seven of their last 10 against Rockbridge County.

Notes: East Rockingham has won six of its last eight against Madison County. … Eagles running back Trenton Morris has 1,237 total yards and 16 touchdowns this season. … East Rock senior Colton Dean has added 92 carries for 591 yards and seven scores. … ERHS quarterback Tyce McNair is 66-of-135 passing for 11 touchdowns and seven interceptions. … The Eagles have scored 108 points over their last two games. … East Rock has won four of its last five overall, including a 53-23 upset of Luray a week ago. … Madison County is coming off its first win of the season. … MCHS quarterback Jeremy Fox leads the Bull Run District with 1,222 passing yards, 14 touchdowns and three interceptions. … Mountaineers receivers Hugh Wingate, Jack Bourdon and Khalid West have combined for 85 catches for 1,0333 yards and 15 touchdowns. … Madison running back Isaiah Dowell ranks fifth in the district with 61 carries for 786 yards and a pair of scores. … The Mountaineers are giving up 43.7 points per game this season. … Madison hasn’t had a winning record since 2010.

Notes: Waynesboro has lost 20 straight games. … The Little Giants haven’t had a winning season since reaching the playoffs four straight years from 2014-2017. … Freshman Adam Jackson will start at quarterback for Waynesboro. … The Giants have been outscored 393-44 this season. … Waynesboro has only had four winning seasons since 1998. … The Giants have lost 15 of their last 19 against Broadway. … The Gobblers are looking to avoid their first winless season since 1976. … Landen Stuhlmiller will start his fourth game at quarterback for Broadway. … BHS receiver Nate Tinnell ranks third in the Valley District with 39 catches for 560 yards and two touchdowns. … Zero players have rushed over 100 yards for the Gobblers. … Broadway is averaging 8.8 points per game.