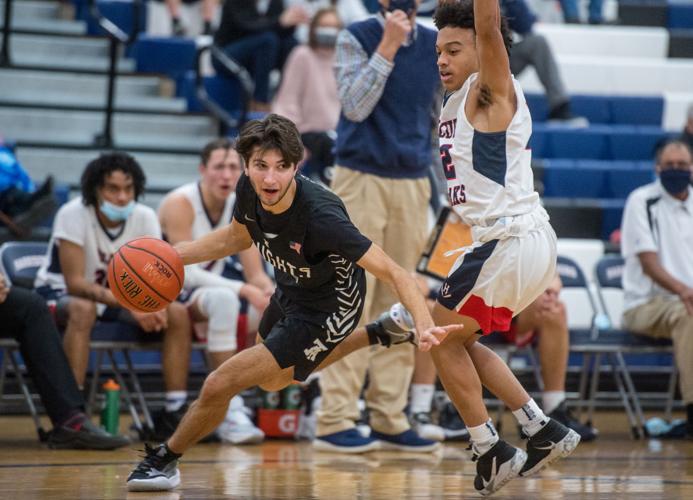 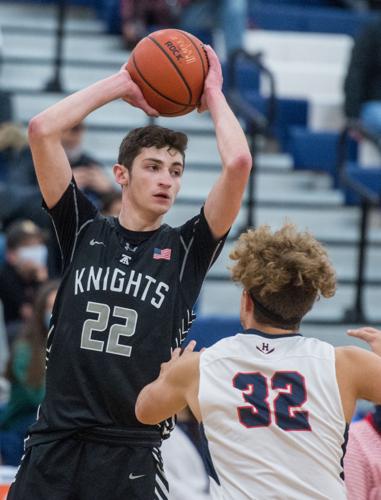 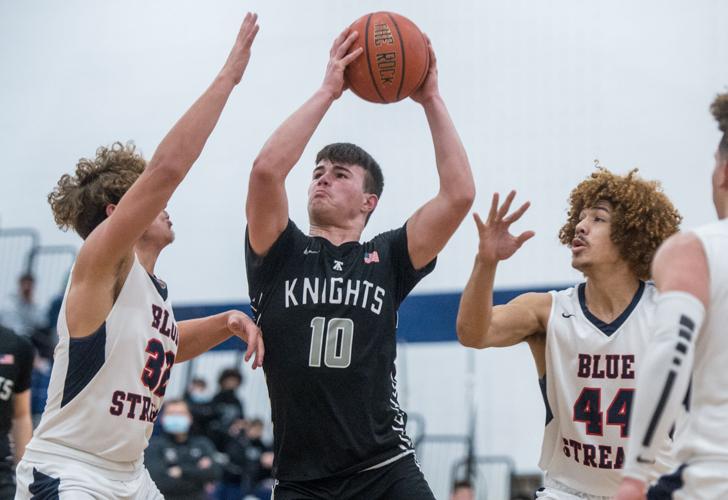 Turner Ashby's Beau Baylor threads the gap between Harrisonburg's Evan Bert and Dante Edwards as he drives in for a shot.

Turner Ashby's Beau Baylor threads the gap between Harrisonburg's Evan Bert and Dante Edwards as he drives in for a shot.

Don't tell that to the Turner Ashby boys basketball team.

The Knights came out firing and kept on shooting from behind the arc, finishing with a program-record 13 treys en route to a big 58-37 Valley District road win over Harrisonburg Friday night at Claude Warren Fieldhouse.

"Usually, we are a pretty good 3-point shooting team, " said Spruhan, a long 6-foot-6 forward and one of eight Knight seniors. "I think us crashing the boards really helped our confidence on being able to let it fly."

With TA leading 28-18 at the break, it looked like the Streaks may make a run early in the third. Both teams hit a pair of 3s to start the frame and then two Evan Bert jumpers and a Jadon Burgess free throw by Harrisonburg cut the lead to 34-29 with 3:25 left in the quarter.

The Knights didn't panic, however, and stuck to their game plan. Spruhan hit a 3 and senior Adam Bass stepped up and followed that with two more that pushed the margin to 45-31 at the end of the third and Streaks never threatened after that.

Keplinger finished with 12 points, including three treys, and Bass had all nine of his points from behind the arc for the Knights. Noah Gerber dished out seven assists.

"We shot the 3 well today," a very happy first-year TA coach Clay Harris said. "We practice shooting them a lot. We rely on the 3 and it paid off tonight. It was nice to see some fall as we haven't been shooting the ball real well lately. Adam Bass was a great lift off the bench with those 3s in the second half."

"A lot of those (TA) kids have been coming to my basketball camps. We knew Spruhan was a good shooter and his confidence has really grown. When you hit a couple 3s the basketball gets bigger for you and your teammates. We had rotations that we tried to get to but we couldn't because of Spruhan stretching the floor."

The Streaks (3-7, 0-1 Valley) had a two-game win streak snapped and head to Roanoke today to take on Patrick Henry.

"We have got to defend and we've got to get some more buckets and get better in the paint," Burgess said of his team's keys to future success.

The Knights (7-4, 1-1 Valley) have won two straight and will host Rockbridge County on Tuesday.

"I want what is best for these seniors. They are a great group of guys, we're getting some wins and I am just excited moving forward," Harris concluded.