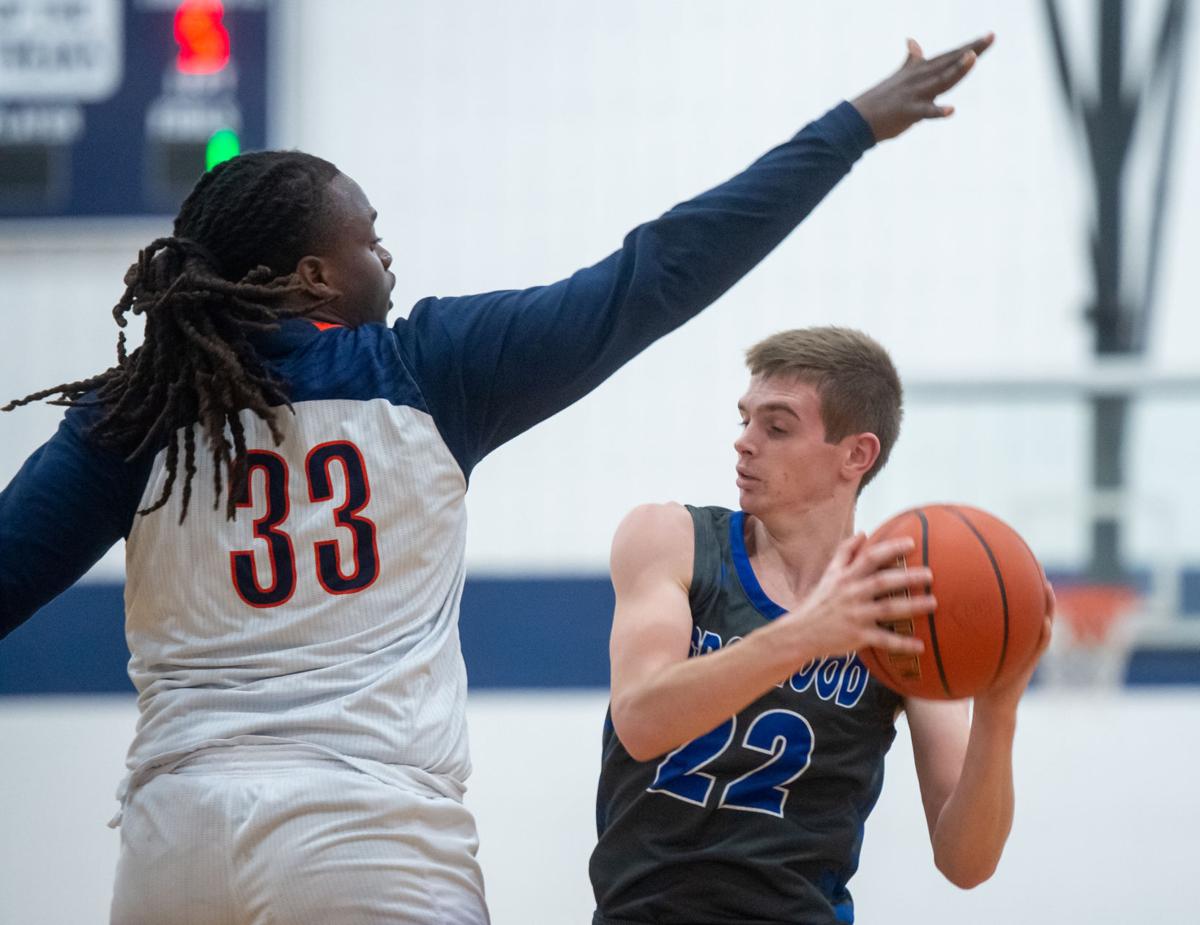 Spotswood's Jonathan Harding protects the ball from Heritage-Lynchburg's Terrell Washington during a game in Harrisonburg earlier this season. 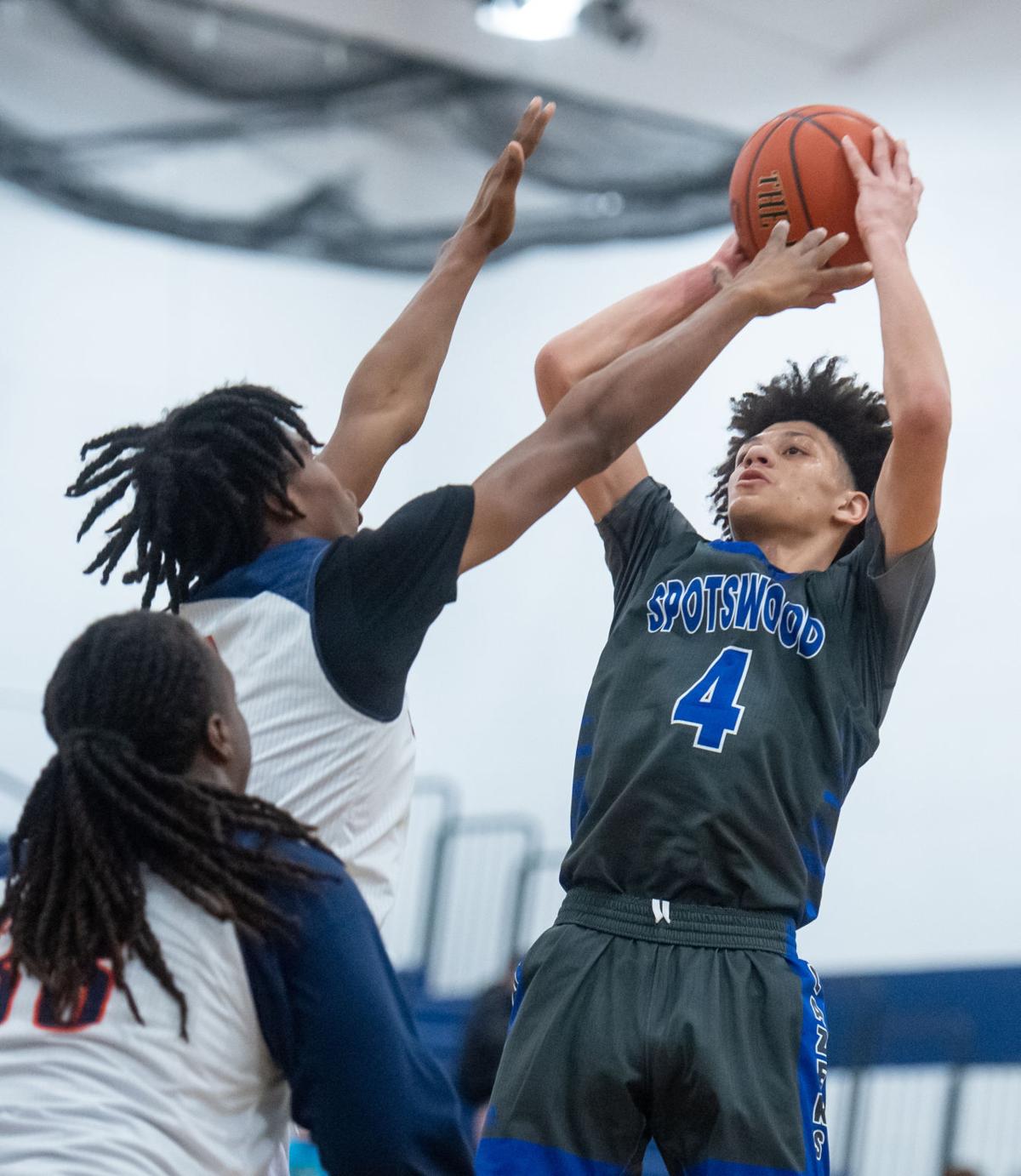 Spotswood's Camryn Pacheco goes up for a shot against Heritage-Lynchburg's Hussain Williams. 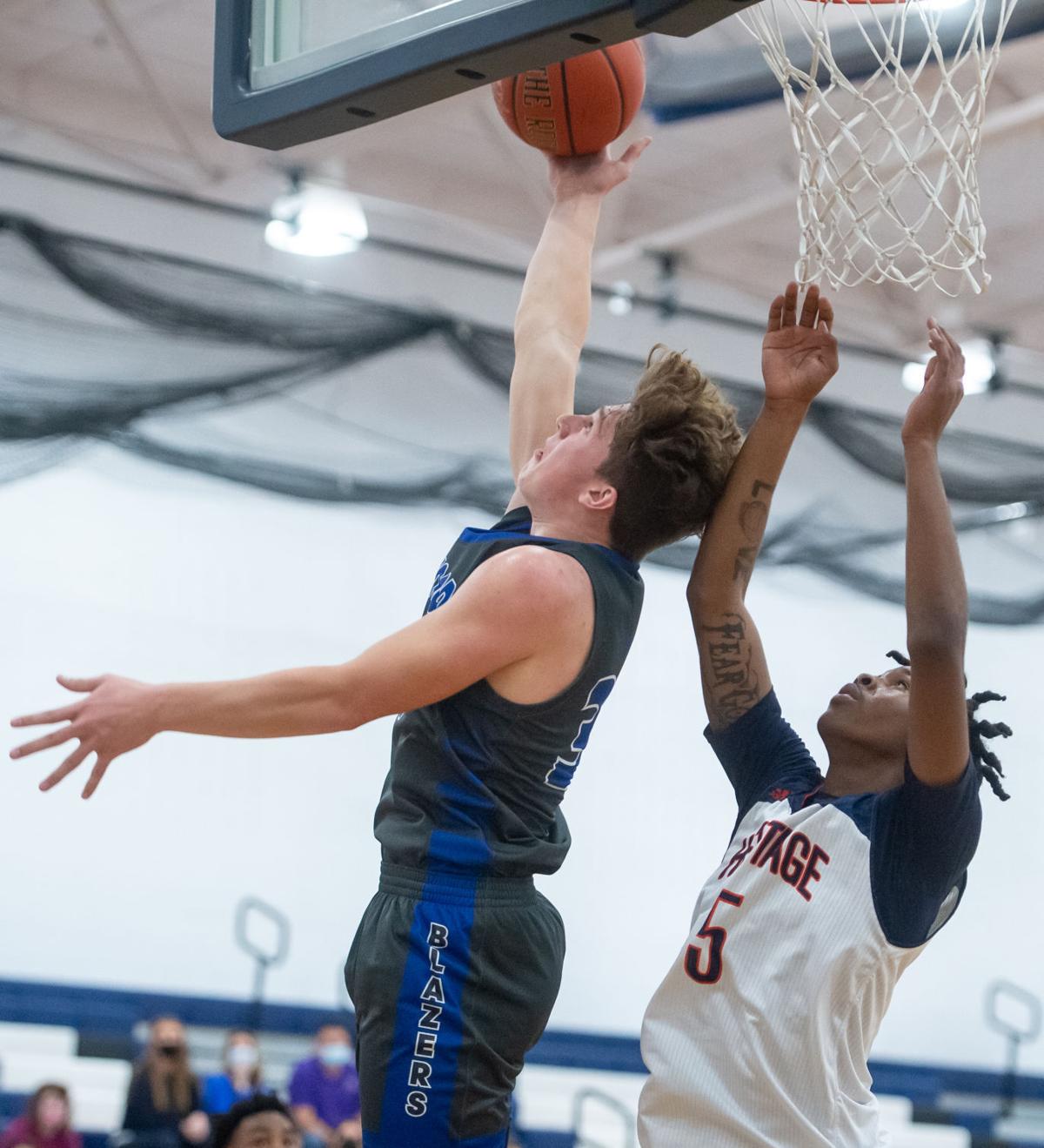 Spotswood’s Rayne Dean goes up for a shot past Heritage-Lynchburg’s Hasanur Freeman earlier this month at the Roger Bergey Classic in Harrisonburg.

Spotswood's Jonathan Harding protects the ball from Heritage-Lynchburg's Terrell Washington during a game in Harrisonburg earlier this season.

Spotswood's Camryn Pacheco goes up for a shot against Heritage-Lynchburg's Hussain Williams.

Spotswood’s Rayne Dean goes up for a shot past Heritage-Lynchburg’s Hasanur Freeman earlier this month at the Roger Bergey Classic in Harrisonburg.

PENN LAIRD — Rayne Dean stood inside the East Rockingham gym on Dec. 3, staring at the crowd packed in the bleachers on both sides and admitted it was a new environment for him.

It was just the second game of Dean’s young varsity boys basketball career at Spotswood and it was his first in the intense rivalry series that pits the Trailblazers against the Eagles twice a year.

“It was crazy, probably one of the biggest games in my career,” said Dean, a 6-foot-4 freshman forward for Spotswood. “It was loud. It was fun, though. I like when the energy is like that. It’s fun.”

The Trailblazers lost that game 68-65, but saw the freshmen duo of Dean and Camryn Pacheco come up with big buckets in the fourth quarter to help Spotswood make a furious comeback attempt.

One week later, Spotswood avenged that loss with a 23-point blowout of the Eagles in Penn Laird.

That’s just how this season has went for the young Trailblazers this year, going through growing pains at times but showing growth from each setback. Spotswood has won seven of its first 12 entering 2022.

“I’m hopeful we can kind of hit our stride here and iron some things out,” SHS coach Chad Edwards said. “That’s what we need the most — just getting that practice time. It’s a big ask as a coach to expect any team to pick up things on the fly without repping them, especially with a young team.”

Coming into the season, the face of the Trailblazers was senior guard Carmelo Pacheco.

And there’s no doubt the 6-foot-4 versatile scorer deserved that recognition as he’s exploded for multiple scoring nights of 30-plus points and is becoming more comfortable as a vocal leader with each game.

“They’ve been great,” said Spotswood sophomore Nate Leslie, a 6-foot guard. “They’re tough on us, but it’s been tough love. It’s helping all of us a lot. We’re expected to carry on that tradition.”

As impressive as Carmelo Pacheco has been, he’s among the first to admit that if Spotswood is going to carry on the winning tradition that it has built as one of the state’s top Class 3 programs, it’ll be because of the contributions of the underclassmen, including his younger brother, Camryn.

Camryn Pacheco, a 6-foot-2 guard, and Dean are a pair of freshmen that are in the starting lineup for the Trailblazers, along with 6-foot-2 forward and second-year starter Jonathan Harding.

The bench attack for Spotswood is almost entirely underclassmen, however, with sophomores Leslie, Jackson Li and Parker Webb, along with freshmen Jackson Graves and Tyler Sprague, contributing in different ways.

“It speeds up a lot,” Dean said of the difference between varsity and JV. “It’s a lot faster, a lot more physical. You have a lot more fundamentals you have to focus on. You can’t just rely on your skill.”

The sophomore and freshmen on Spotswood’s roster certainly have plenty of skill and it’s shown throughout the season. Li and Webb have had big shooting nights from 3-point range for the Trailblazers, Dean and Camryn Pacheco made an impression early on and established themselves as consistent, reliable starters, Harding remains the blue-collar workhorse and Graves and Leslie are earning more quality time off the bench as they continue to grow and adjust to the speed of the varsity game.

“It’s been a little difficult to adjust,” Graves said. “JV is a lot slower, so it’s a big transition for all of us. We’re getting more confident, though, as we go along. It helps that we know how each other play, know how to get each other’s confidence up. We just know how to play well with each other.”

Harding started for the Trailblazers last season as a freshman and said that year of experience has allowed him to give some of his classmates guidance as they go through a similar transition.

“I try to give them confidence every day and I try to lead,” Harding said. “It started with the off-season workouts. I know what it’s like to be young on a varsity team. Coaches can be intimidating, so I try to build them up and give them confidence. They’re starting to play their game. They’re not worried about anything, just going out there and playing. That’s when they’re at their best.”

A majority of the sophomores and freshmen on the Spotswood roster have played together since they were in middle school, the players said, and it’s helped them through the start this year.

“We’re slowly getting better,” Camryn Pacheco said. “You have to adjust.”

The Trailblazers have yet to win three in a row, but have faced a challenging non-district schedule.

On Friday, Spotswood will finally open up Valley District play when it travels to Broadway at 7 p.m.

“We’ve stayed together,” Dean said. “There are a lot of bumps and you just have to fight through that. We have a good senior class to help us through it. Positivity helps, too. We’ve done well, I think. We’ve taken some losses, but it comes with it. We just keep fighting through it and playing.”

Those tough losses to teams like E.C. Glass, Millbrook, Wilson Memorial and East Rockingham have provided lessons for the young Trailblazers and opportunities to build on for district play.

“The biggest thing I see is a greater appreciation for winning plays and details,” Edwards said. “One of the biggest adjustments going from JV to varsity is the detail that’s required. … We really try to put an emphasis on that. It’s exciting to have such a young group see the light bulb go off.”

Having such an inexperienced squad that’s so committed to the details this early in their careers has brought a renewed sense of energy and enthusiasm for Edwards, who is in his 17th season coaching at SHS.

“The word I’ve used is reinvigorating,” Edwards said. “Not only are they young and talented, but they love being in the gym. Our best players and our best teams are typically guys that love to be in the gym. This group loves being in the gym. That spirit is refreshing. These young guys really embody the word together. It’s refreshing to not have to be quite so intentional in teaching that.”

With only three seniors graduating from this year’s team, it’s hard not to think about the future.

Spotswood will have one of the most experienced, and talented, teams in the area next season.

“Our coaches prepare us really well and our seniors help us a lot,” Li said. “It’s really exciting to think about the future and how good we’re going to be.”

That look ahead certainly has crossed Edwards’ mind as he works with his young squad this year.

But with Carmelo Pacheco, a legitimate Division I prospect, leading the way for the Trailblazers and the young pieces coming along faster than expected, the veteran coach said there’s no reason to wait.

“The future is bright,” Edwards said. “Having said that, we want to win now.”