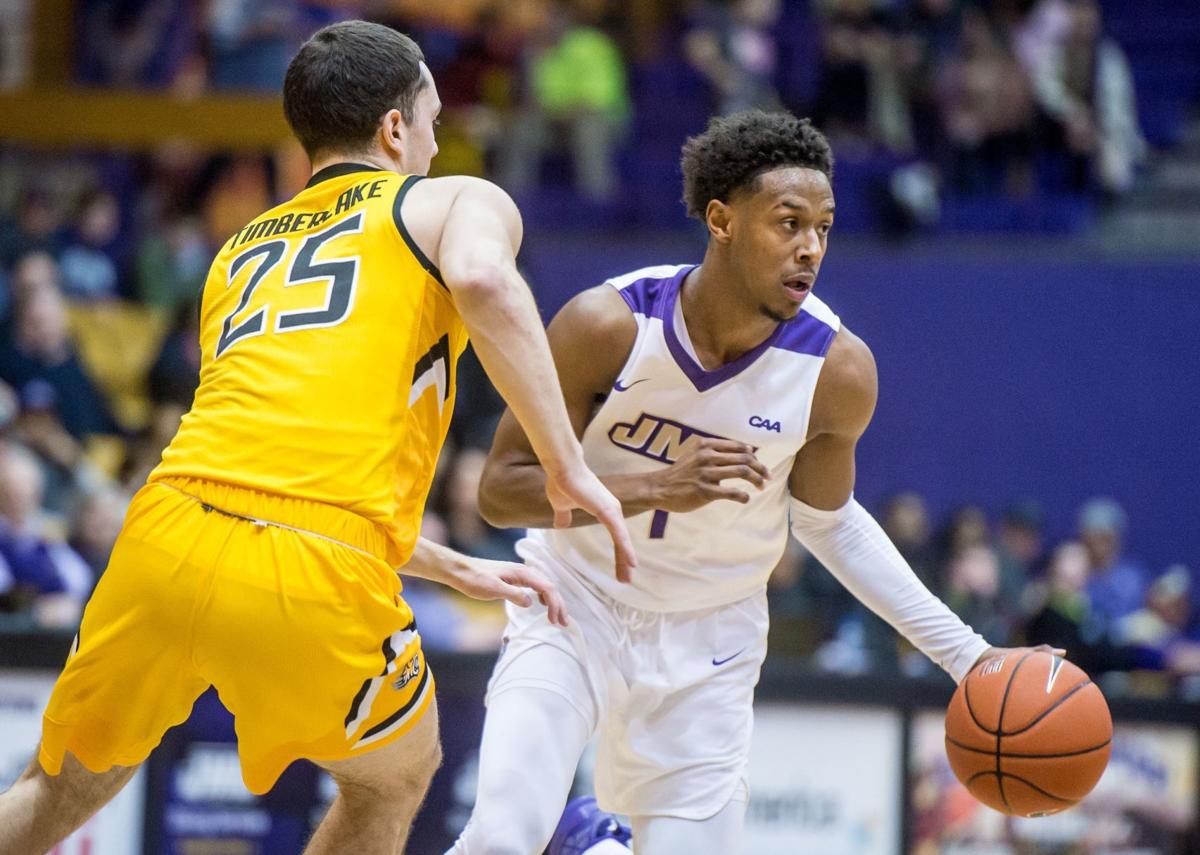 James Madison guard Matt Lewis drives to the basket against Towson’s Nick Timberlake during a game last winter in Harrisonburg. 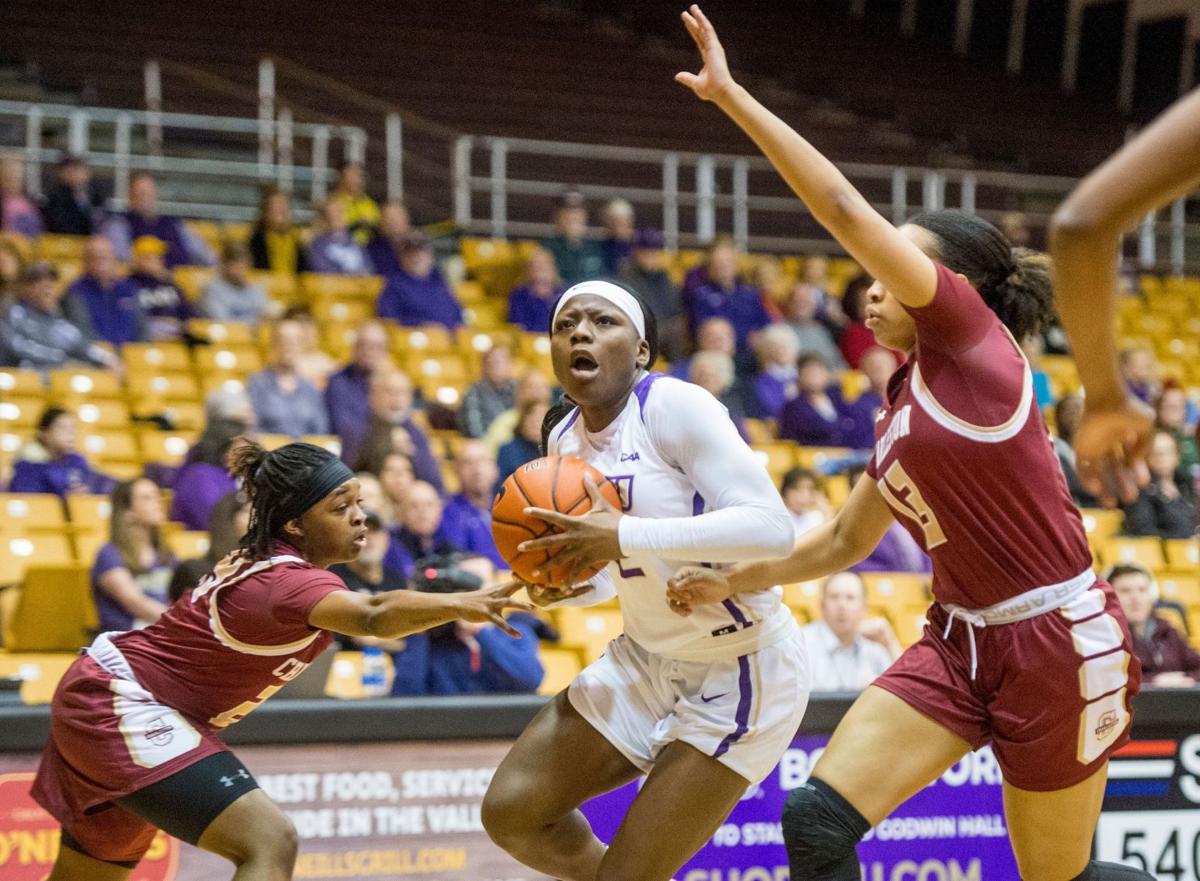 JMU forward Jaylin Carodine takes the ball up in traffic against CAA rival College of Charleston last season at the Convocation Center in Harrisonburg. 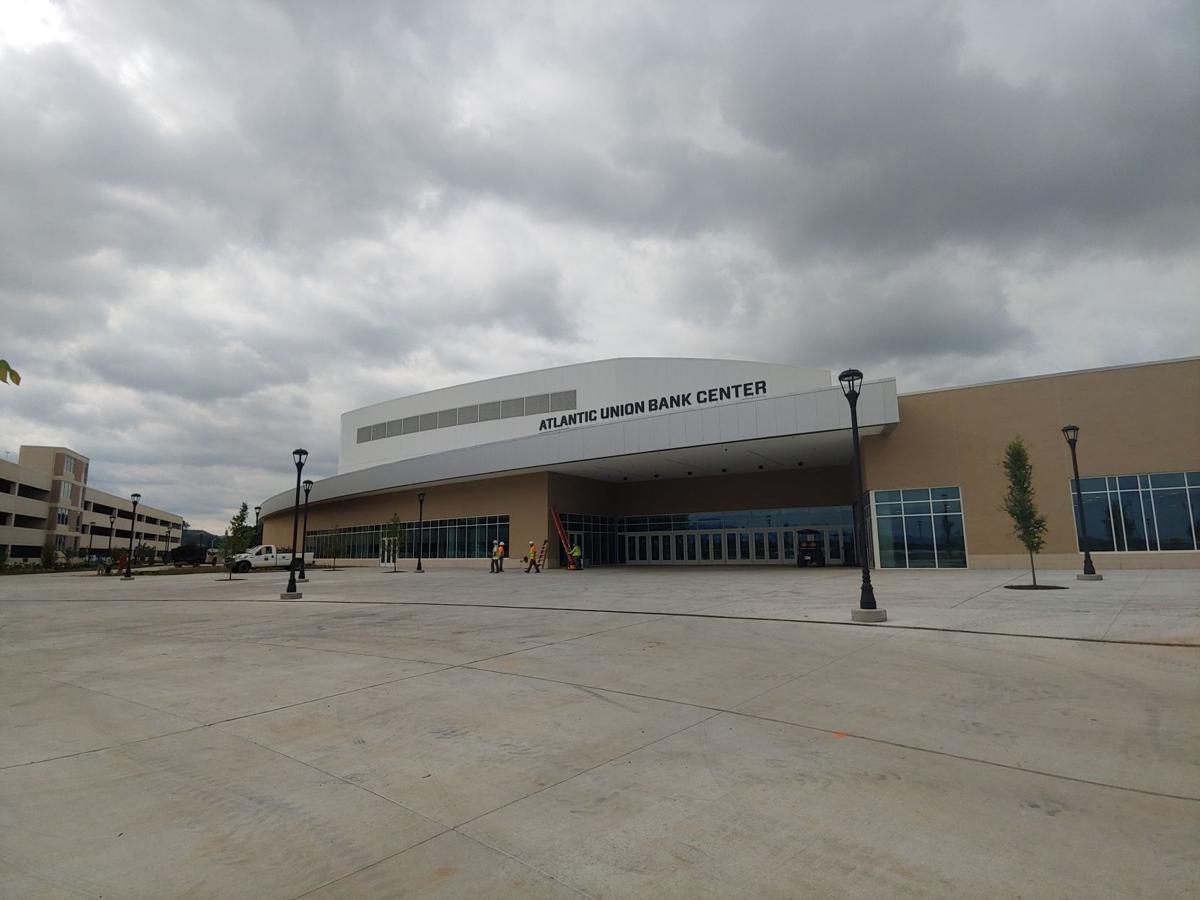 The Atlantic Union Bank Center sits on the campus of James Madison University in Harrisonburg.

James Madison guard Matt Lewis drives to the basket against Towson’s Nick Timberlake during a game last winter in Harrisonburg.

JMU forward Jaylin Carodine takes the ball up in traffic against CAA rival College of Charleston last season at the Convocation Center in Harrisonburg.

The Atlantic Union Bank Center sits on the campus of James Madison University in Harrisonburg.

With the NCAA Division I Council set to meet today to begin settling details for the upcoming college basketball season, administrators and coaches in the Colonial Athletic Association are examining possibilities of playing conference games inside of a “bubble,” potentially on campus at James Madison.

With the success of the NBA and WNBA bringing all teams to single locations for the entirety of their restarted seasons, discussions among college basketball figures of playing out its season in a similar manner have been widespread.

“I think it is probably one of the more realistic options we have looked at,” JMU athletic director Jeff Bourne said. “Whether it is some form of comprehensive bubble, partial bubble, something that we move around regionally, I think something along those lines is something we are going to have to look at. I don’t think conventional conference play the way we’ve played in the past will work.”

With more than 350 Division I programs it would be impossible to fully replicate the NBA’s bubble at Disney World, but officials continue to explore options that might include sequestering entire conferences in a single location as well as modified bubbles to bring multiple teams together under intense testing and safety guidelines.

“We’re very much in the planning and development stages,” CAA commissioner Joe D’Antonio told the Daily News-Record. “Whether it is a bubble for all 10 teams or some kind of mini-bubbles with groups of teams, we’re still trying to put the pieces in the puzzle of what that could look like. The discussions right now are all coalescing around what are our options and let’s put all those options on the table. I’m not at liberty to talk about specific locations, but we are pursuing options that are related to both third-party venues and within our own campus structures if there is an environment that could work.”

As coaches across the CAA talk among themselves, many seem to agree that if the league decides to play its conference season in a bubble, JMU may be the ideal location with both the Convocation Center and the brand new Atlantic Union Bank Center potentially allowing the league to use three courts inside two arenas.

D’Antonio listed some of the factors that could go into choosing a bubble location for CAA play:

• Health and safety for participants inside the bubble.

• Availability of courts for practices and games.

• Ability to accommodate referees and other personnel beyond players and coaches.

In Harrisonburg, the two arenas not only house three courts for game action, but also multiple locker rooms and training room facilities for several teams, which could make JMU the front runner to host among campus locations.

“I think that is a very fair statement, yes,” Bourne said. “You’ve also got Elon which recently opened an arena, so they have a certain amount of potential to do that as well. But institutions that have more than one court, there is some appeal. But Harrisonburg would want to make sure it has a much lower rate of COVID before we host something like that.”

According to the Virginia Department of Health’s website Tuesday, Harrisonburg has 2,269 reported cases of coronavirus with 34 deaths and 89 patients hospitalized. According to the same website, surrounding Rockingham County reported 1,294 cases with 111 hospitalizations and 20 deaths.

JMU switched to remote coursework earlier this month after a rapid rise in positive COVID-19 tests among students in the first weeks of the semester. Depending on the return of the general student body, availability of residence halls and the university rec center with several courts on which teams could practice might also be a factor in JMU’s favor.

Northeastern coach Bill Coen sits on the board of the National Association of Basketball Coaches and stays in contact with colleagues nationally as well as within the CAA.

He agreed that JMU along with Elon and Towson, which has practice courts in the Towson Center adjacent to SECU Arena, are some of the best potential locations within the conference.

But Coen said there were still a lot of questions to be answered.

“The first domino that needs to fall is what the Division I Council is going to do in determining what the season could look like,” Coen said. “But we’ve had those conversations with different coaches in the league. It’s obvious you have to get creative and having bubble sites might give us the best chance of having a legitimate season.”

If the CAA attempts the bubble model there are plenty of logistical details to sort out. One option that might closest replicate what the professional basketball leagues have done is to play the entire conference season in one city over the course of multiple weeks. Another might be to play multiple smaller round-robin events over shorter time frames.

It is also unclear if everyone on site would be forced to remain fully quarantined for the duration of the events, and whether or not men’s and women’s programs can play in the same location.

But as the season draws closer it has become clear some sort of bubble is a real possibility and Harrisonburg is a prime candidate to play host.

“It makes a lot of sense,” JMU women’s coach Sean O’Regan said. “I have talked about it with some other coaches and none object because everyone wants to make sure that if it comes down to that, we want to get the season in. But it raises different questions. How long will it be? Will it be totally quarantined? What if you’ve got a 2-year-old and a 4-year-old? Can they come in? All those things, that’s where it gets tricky. But we can definitively accommodate that here. One hundred percent.”