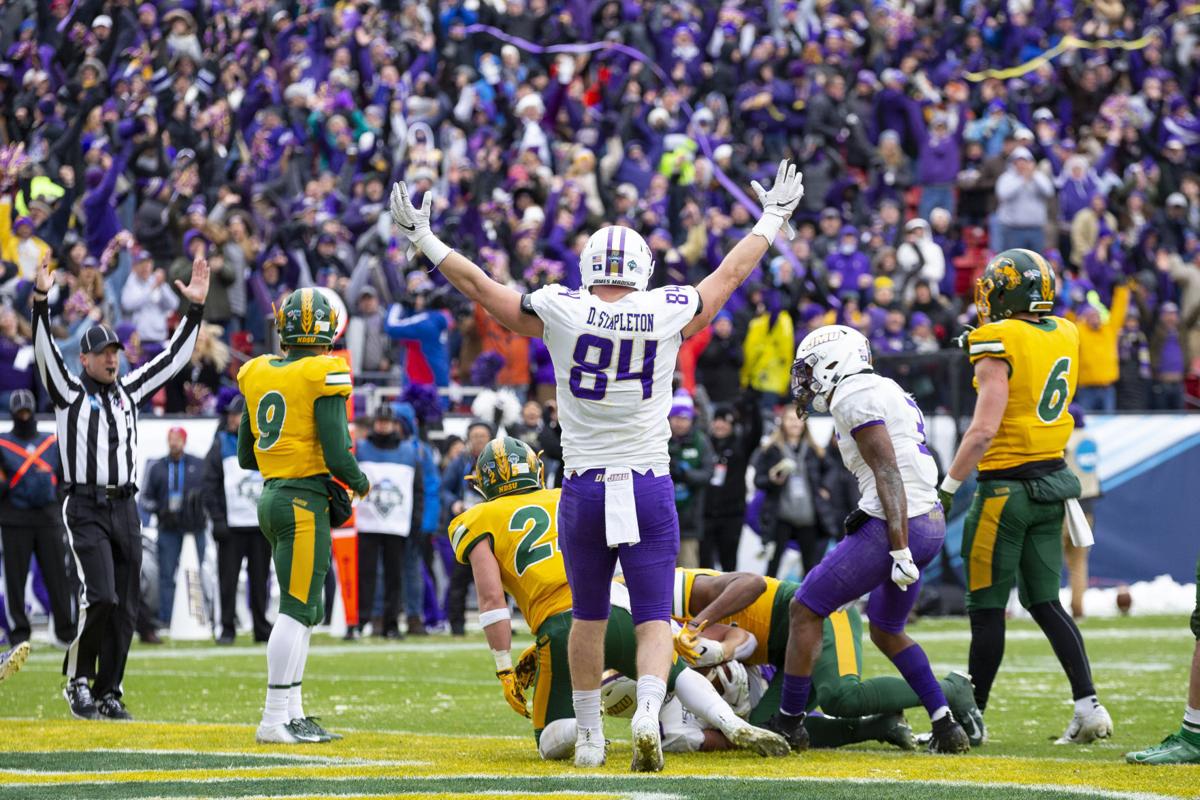 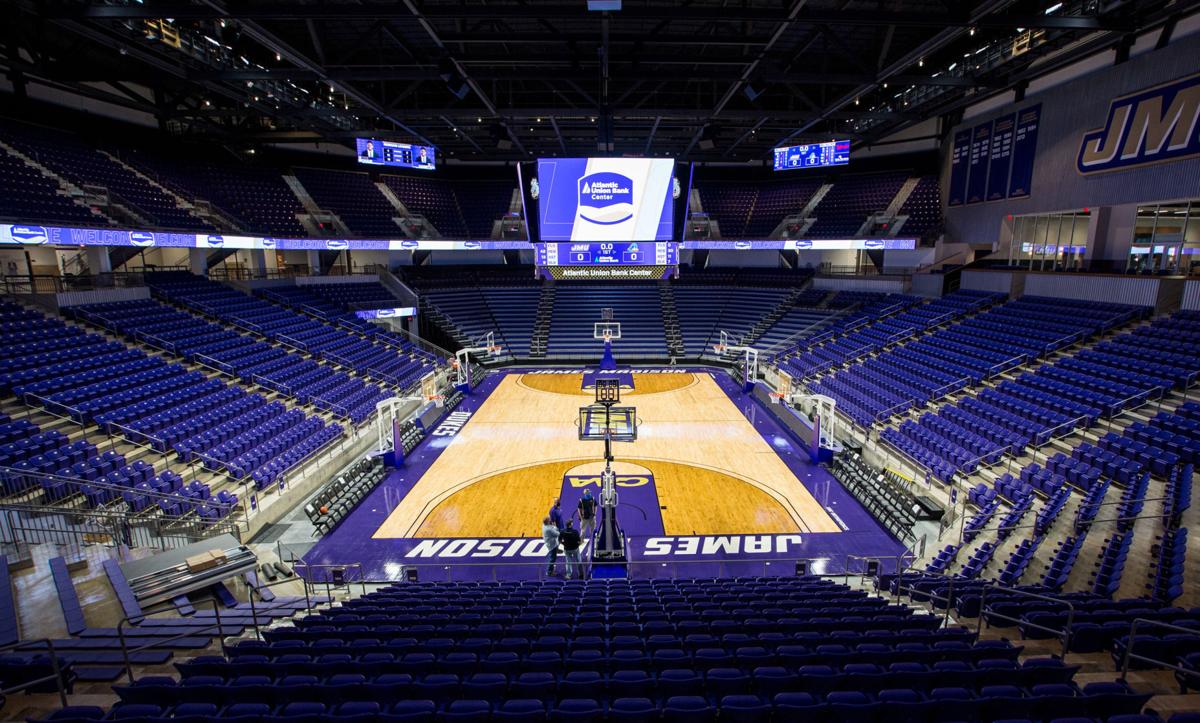 With only 250 fans allowed inside the Atlantic Union Bank Center during the 2020-21 men’s and women’s basketball seasons, streaming viewership for Dukes games on FloSports increased over the previous season.

With only 250 fans allowed inside the Atlantic Union Bank Center during the 2020-21 men’s and women’s basketball seasons, streaming viewership for Dukes games on FloSports increased over the previous season.

Streaming viewership for James Madison sports has been well above the conference average since the Colonial Athletic Association signed a media rights deal with FloSports in 2019. But the switch to the subscription-based FloSports service saw a drop in JMU football viewers compared to the Dukes’ own MadiZONE product.

“We say that we have a passionate fan base, a fan base that is invested and cares about our sports and student athletes,” JMU assistant athletic director for communications Kevin Warner said, “I think these streaming numbers back that up. We do have a regular audience and we bring value. Not that I can go into detail on anything happening in the conference realignment front, but we’ve given statements that reflect there is constantly evaluation taking place. I think these numbers show the value of the JMU fan base and the interest in our sports programs.”

Contractual restrictions prevented the CAA from releasing detailed conference-wide data, but the league office did provide the DN-R with average viewership for football as well as men’s and women’s basketball.

For the 2019-20 and 2020-21 school years, JMU averaged 4,851 viewers for home football games that streamed exclusively on FloSports. The CAA averaged 3,243 viewers for football games on Flo. For men’s basketball, the Dukes’ home games drew an average of 1,208 viewers, a little less than 200 more than the league-wide average. JMU women’s basketball drew 920 viewers per home game, compared to 669 league wide.

The Dukes also appear to draw an above average audience when they play on the road. For instance, JMU’s 2019 football game at Stony Brook attracted 4,850 FloSports viewers for a game that was also televised on SNY in large portions of the East Coast.

Between 2015 and 2018, when each JMU home football game was streamed for free on MadiZONE, the Dukes drew an average of 7,186 viewers.

“That goes to what [JMU athletic director] Jeff Bourne has said before in some of his communications,” Warner said. “We had a free system that worked well for us. We could sell sponsorships and we could make money on it and it optimized our viewership. I think these numbers show we are not optimizing our viewership on the FloSports platform.”

Some other factors have played a role in streaming viewership throughout the years. Since 2017, the vast majority of JMU’s regular-season home football games, as well as selected men’s and women’s basketball games, have been broadcast on linear television by a regional sports network such as MASN or NBC Sports Washington.

COVID-19 also had an impact with FloSports viewership seeing an uptick at JMU across multiple sports during the 2020-21 school year. That might be attributed to limited in-person attendance. For example, the JMU women’s basketball team drew nearly 2,000 fans per game to the Convocation Center during the 2019-20 season. Last season, with attendance at the new Atlantic Union Bank Center limited to 250 fans, the Dukes women’s basketball viewership on FloSports more than tripled.

JMU, which according to sources was the only CAA school to vote against the FloSports deal, preferred to continue to offer MadiZONE as a free option to its fans. The original FloSports contract paid the conference more than $1 million, but a significant chunk of that profit was reinvested into linear basketball broadcasts on CBS Sports Network.

During the 2019-20 school year, JMU limited its number of FloSports-exclusive broadcasts to the contractual minimum, continuing to offer MadiZONE streams for many other games. After COVID-19 caused the cancelation of several athletic events, the CAA was forced to provide virtually every conference contest to Flo to meet its content inventory obligations.

This summer an expansion of the FloSports agreement was announced by the league, officially giving FloSports exclusive streaming rights to every CAA game.

“If you have not seen my previous correspondence, I have been honest that I don’t think FloSports is the best option for JMU,” Bourne wrote to Dukes fans in an open letter last month. “This expanded agreement does not change that opinion. However, as long as JMU must operate within the league’s structure, it also makes sense to ensure we are maximizing the opportunity.”

“The previous arrangement had negligible revenue distribution to the institutions,” Bourne’s statement continued. “However, this expanded agreement involves a notable distribution increase to JMU, which will allow us to address a few needs while also strategizing future broadcast initiatives. I’d still prefer a different streaming approach, but it’s nice to see some benefit for JMU with this expansion.”

How the FloSports and MadiZONE viewership compares to other streaming platforms, such as ESPN+ or ESPN3, is unclear. The Dukes’ road game at Weber State on Sept. 18 was streamed on ESPN+, but a Weber State spokesperson said ESPN only provides the Big Sky Conference with a report on streaming viewership once per fiscal quarter.

Requests to ESPN as well as other schools and conferences that broadcast games on ESPN+ for viewership data were either declined or didn’t receive a response.

But JMU’s recent numbers on ESPN’s linear broadcasts have been impressive. The 2019 FCS national championship game between JMU and North Dakota State drew nearly 2.7 million viewers on ABC, the most watched FCS contest ever. It also drew larger audiences than 22 bowl games, including the Belk Bowl featuring Kentucky and Virginia Tech on ESPN.

The Dukes’ 2016 and 2017 FCS title game appearances each drew more than 1.5 million viewers on ESPN2. While overall FCS playoff viewership was down during the pandemic-delayed 2021 spring season, the Dukes semifinal game at Sam Houston State drew 706,000 viewers, nearly 200,000 more than the other semifinal featuring CAA rival Delaware and South Dakota State.

JMU’s softball team also participated last June in the most-watched Women’s College World Series of all time. The Dukes’ upset of No. 1 Oklahoma was the highest-rated opening game in the event’s history, averaging 620,000 viewers, a 20-percent increase over Game 1 in 2019.

I empathize with Jeff Bourne. He's been stating the past couple of years how the Flo Sports deal is not beneficial to JMU. It's unfortunate the conference cannot see what a second class offering Flo Sports has.