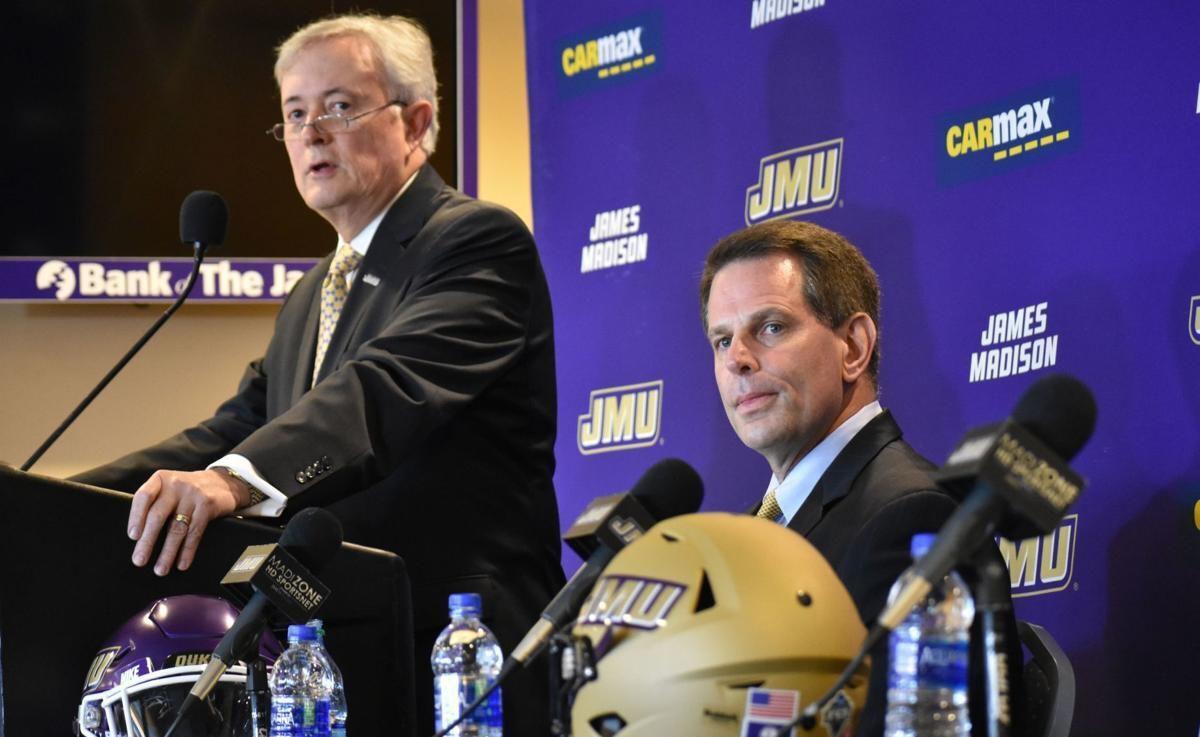 James Madison athletic director and Bridgewater College graduate Jeff Bourne, left, introduces Curt Cignetti during a December 2018 press conference at Bridgeforth Stadium. Bourne told the DN-R this week he anticipates discussions of conference realignment to ramp up across the country. 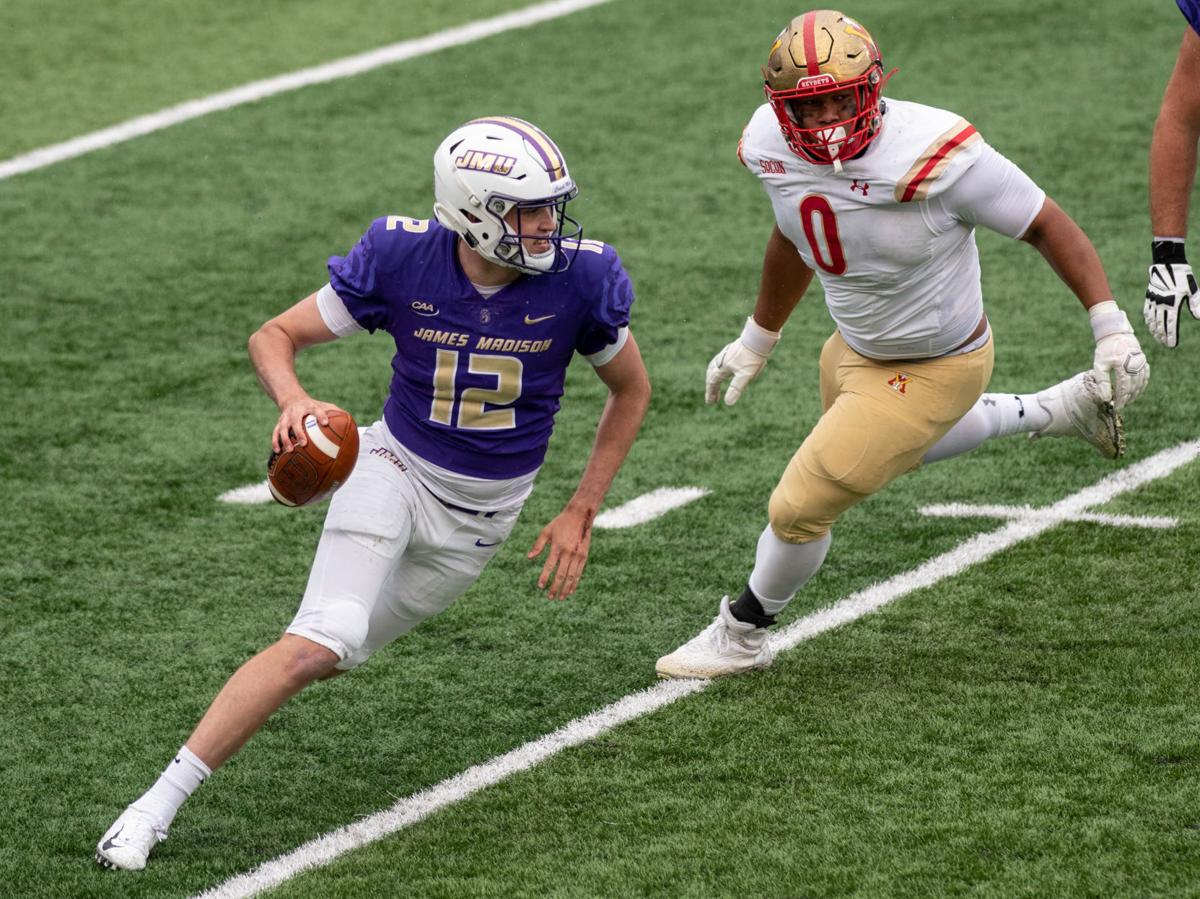 James Madison quarterback Cole Johnson (12) escapes from the pocket during the Dukes’ first-round FCS playoff win over VMI this spring at Bridgeforth Stadium. JMU has been a consistent powerhouse at the FCS level, but many fans have called for a move to FBS.

James Madison athletic director and Bridgewater College graduate Jeff Bourne, left, introduces Curt Cignetti during a December 2018 press conference at Bridgeforth Stadium. Bourne told the DN-R this week he anticipates discussions of conference realignment to ramp up across the country.

James Madison quarterback Cole Johnson (12) escapes from the pocket during the Dukes’ first-round FCS playoff win over VMI this spring at Bridgeforth Stadium. JMU has been a consistent powerhouse at the FCS level, but many fans have called for a move to FBS.

With drastic changes to the way NCAA Division I sports operate on the way, athletic directors across the country — including James Madison’s Jeff Bourne — are anticipating the next round of conference realignment.

“At this point JMU has not been contacted with regard to alignment with a new league or any discussion about an invitation to membership,” Bourne told the Daily News-Record this week. “But I would just tell you that there is constant dialogue nationally right now at a lot of different levels about what happens with alignment outside the Power Five. That is a discussion that I would anticipate growing over time.”

Legislation that would allow players to profit from their own name, image and likeness as well as expansion of the College Football Playoff are two major upheavals to the current college sports landscape expected to pass in the coming months.

Multiple conferences have media rights deals that expire before the end of 2025. Those factors contribute to uncertainty.

Last month, Matt Brown of the Extra Points newsletter acquired emails between Missouri Valley commissioner Doug Elgin and Texas-Arlington athletic director Jim Baker suggesting the school, a member of the Sun Belt Conference, has had conversations with the Missouri Valley about a potential move.

“UT Arlington Athletics is a proud member of the Sun Belt Conference, and our department’s on-going mission is to help strengthen the brand of the league with our successes on and off the playing surfaces. However, we are acutely aware of the ever-changing landscape of collegiate athletics, and conference realignment is – and has been – a driving force in that change. With that reality in place, we are constantly evaluating and conversing about UTA’s position relative to our peers. We are located in a national top-5 media market with a growing population and fertile recruiting base. Those factors, among others, make UTA attractive to many; however, every decision we make is with the best interest of our student-athletes, department and university at the forefront of our minds.”

Bourne, in his one-on-one interview with the Daily News-Record, made similar comments about potential realignment. But unlike Baker he never mentioned the Dukes’ current league, the Colonial Athletic Association, by name.

“There’s always constant dialogue on the conference alignment front. It seems like since COVID a lot of schools are contemplating and trying to debate whether they are in the best scenario they can find,” Bourne said. “JMU is in a position where we really flourished this past year during COVID. Our programs have been incredibly successful. Half of our coaching staff have been Coaches of the Year in the league, so we have been really proud of what we have been able to accomplish. JMU has really not ever changed its posture. We always look at any opportunity that would arise and evaluate it. Would it be good for our institution? We have that responsibility to our constituency base, our coaches and our student-athletes. We’ll always do that.”

UT-Arlington, along with Little Rock, is one of two schools in the 12-team Sun Belt that doesn’t field a football program.

Meanwhile, there has been discussion of James Madison potentially moving from the Football Championship Subdivision to the Football Bowl Subdivision going back to at least 2013 when the university commissioned the Carr Report to investigate the feasibility of such a jump.

JMU stayed put in the CAA during previous rounds of conference realignment, but in the past year Bourne has publicly expressed his displeasure with the CAA’s media rights agreement with the streaming service FloSports. A shift in the Sun Belt’s geography to the east might prove intriguing to the Dukes.

The Sun Belt has also experienced a change in leadership since the last conference shuffle, hiring Keith Gill as commissioner in 2019. Gill has deep ties to Virginia and the mid-Atlantic. He played football at Duke in the early 1990s and later served as athletic director at American and Richmond before taking a job as a top deputy commissioner at the Atlantic 10 offices in Newport News.

I am probably in the minority, but I'd rather be a top dog in FCS with a shot at a national title every year rather than a middle of the pack program playing in a no name bowl game. Evidence in point, ODU played in the Bahama Bowl a few years back. What good did it do them?

I am right there with you, Purple! I am betting that you read the fine sports coverage in the DNR; if so, you could have read repeatedly that players choose to play for JMU so they can be in playoffs and compete for national championships. It is also really fun each week being ranked nationally. The chances of enjoying any of these three FCS benefits is close to zero in the FBS. The big payoff at the end of an FBS year for G5 teams is to play in a Toilet Bowl in Lafeyette, Louisianna.

As for Old Dominion, it is gratifying to watch them show us the way. Our path could easily have been theirs. I just now finished a CBS article that stated this fact about ODU's FBS conference: "Conference USA is the only conference that would have not yet made an appearance (in an expanded College Football Playoff if it had existed during the past seven years). It's also the only one not to have a team finish the season in the final CFP Rankings." It's time to flush the FBS bowls.