You are the owner of this article.
Edit Article Add New Article
You have permission to edit this article.
Edit
Login
Home
News
Opinion
Sports
Features
Obituaries
Photos
Services
Advertise With Us
Classifieds
Jobs
Homes
Public Notices
Events
e-Edition
1 of 8 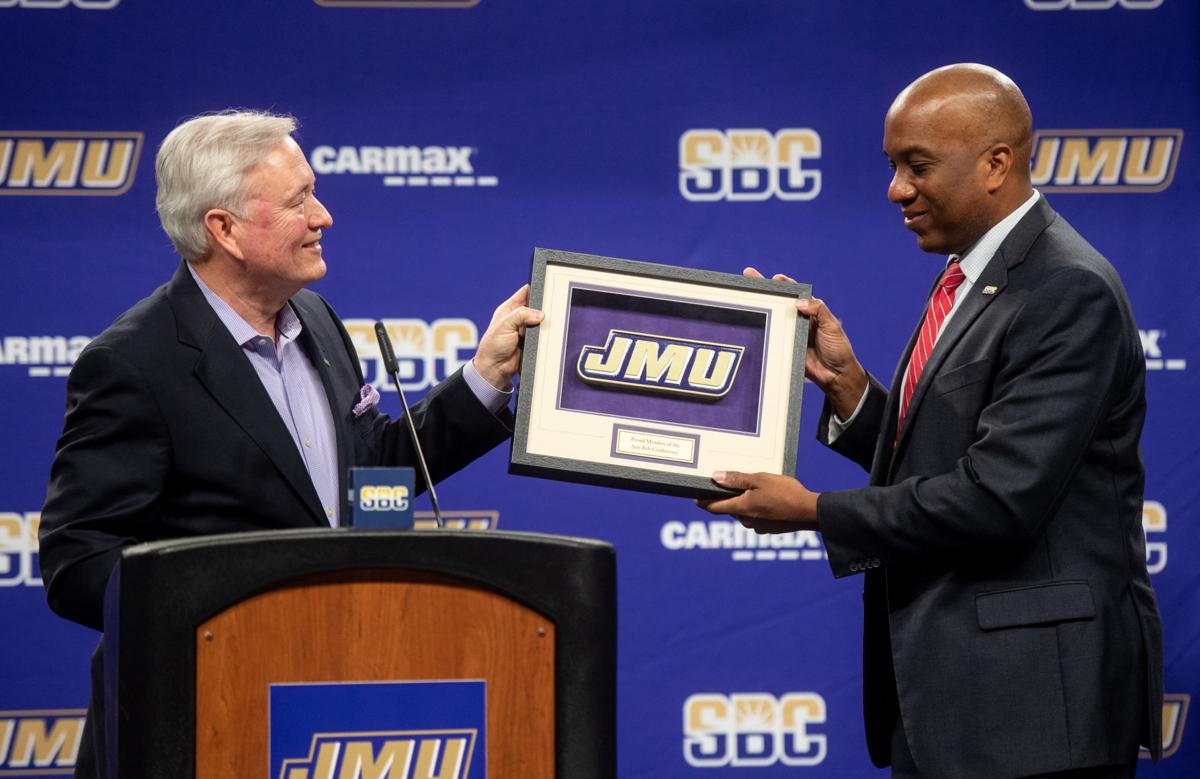 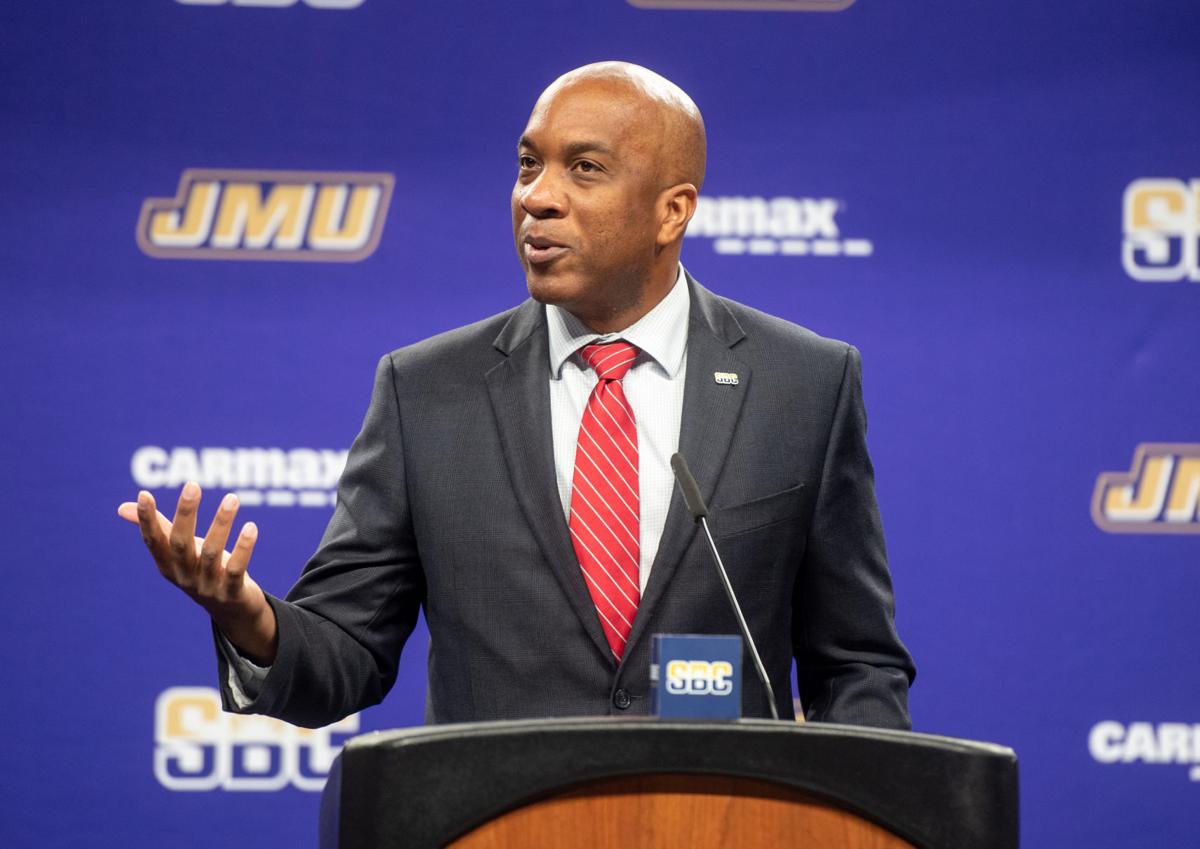 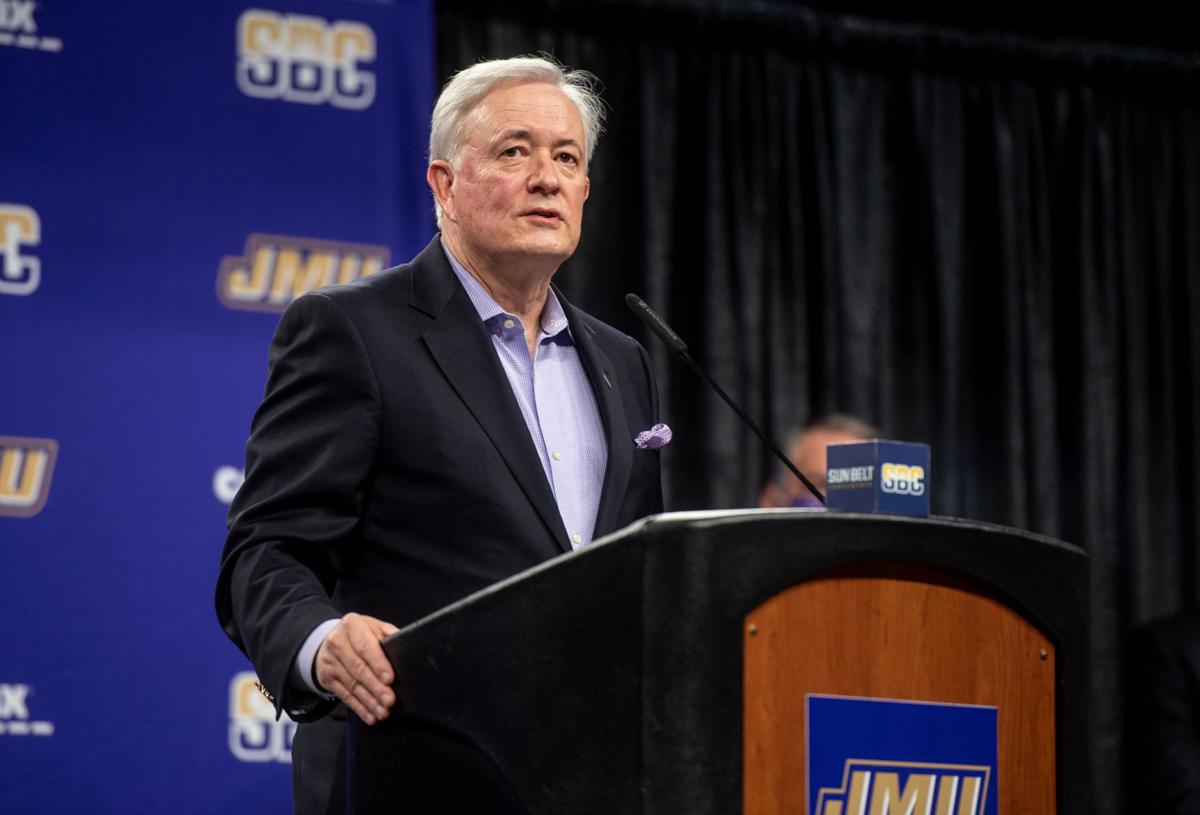 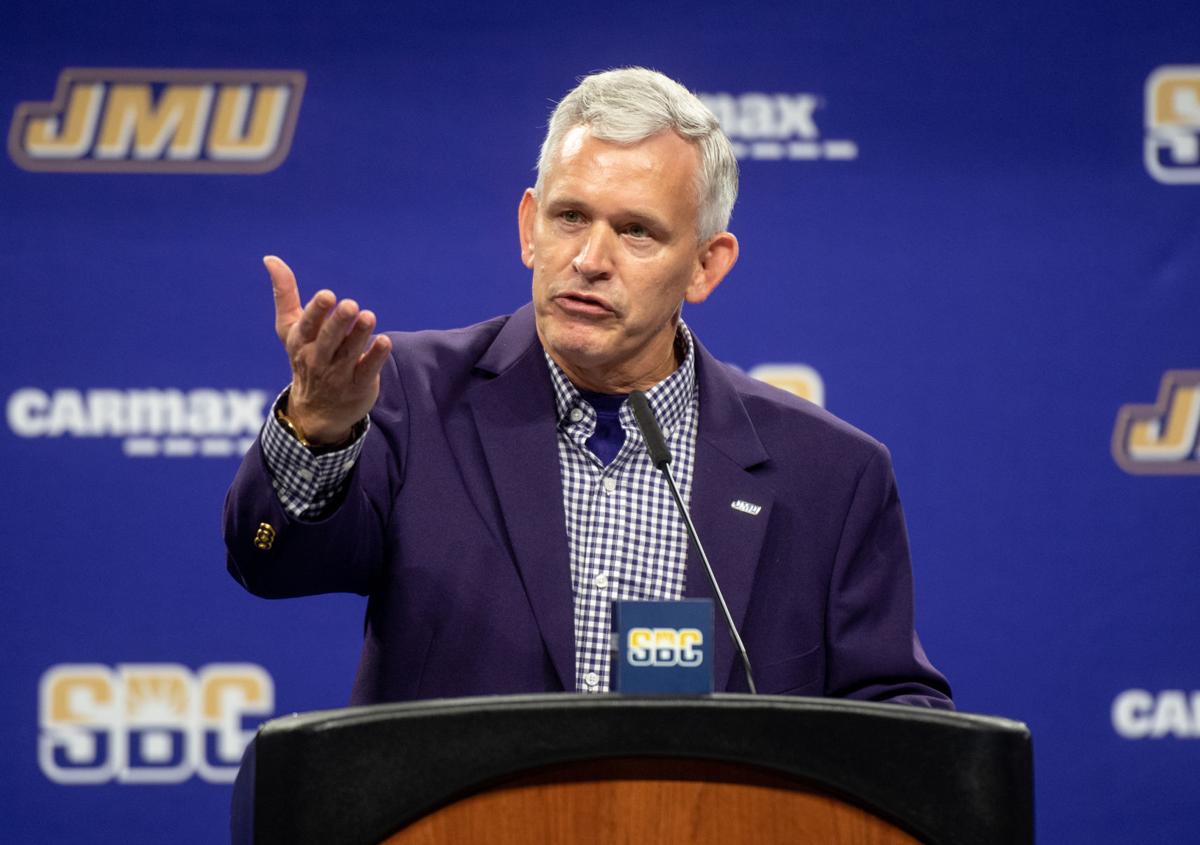 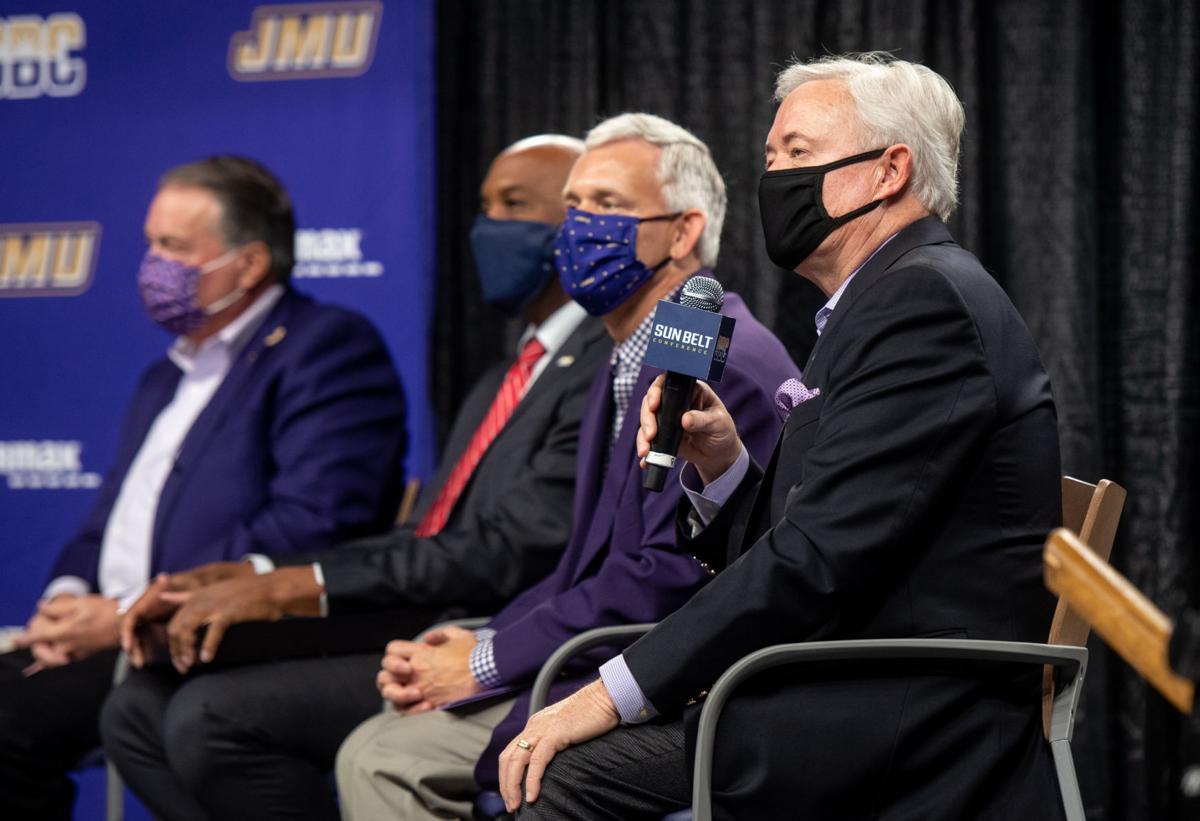 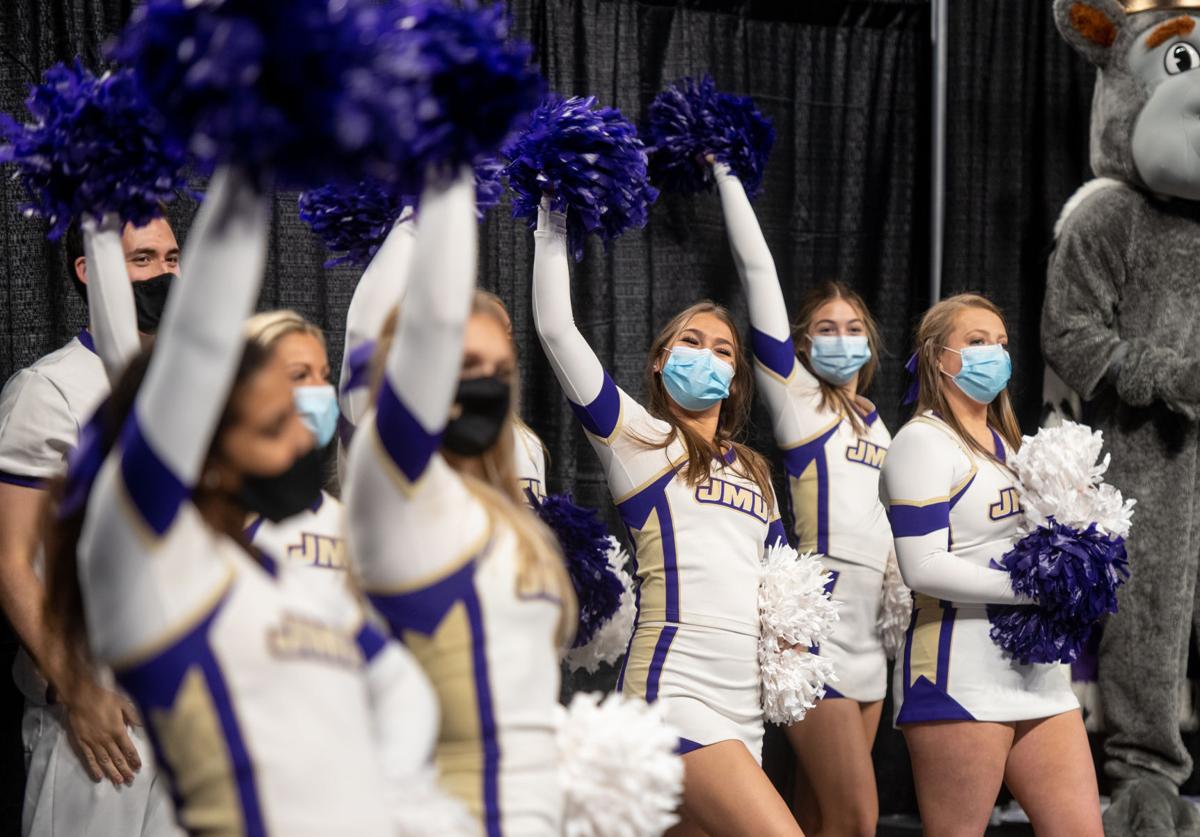 James Madison University cheerleaders rally on the crowd during a press conference at the Atlantic Union Bank Center formally announcing the school's acceptance to the Sun Belt. 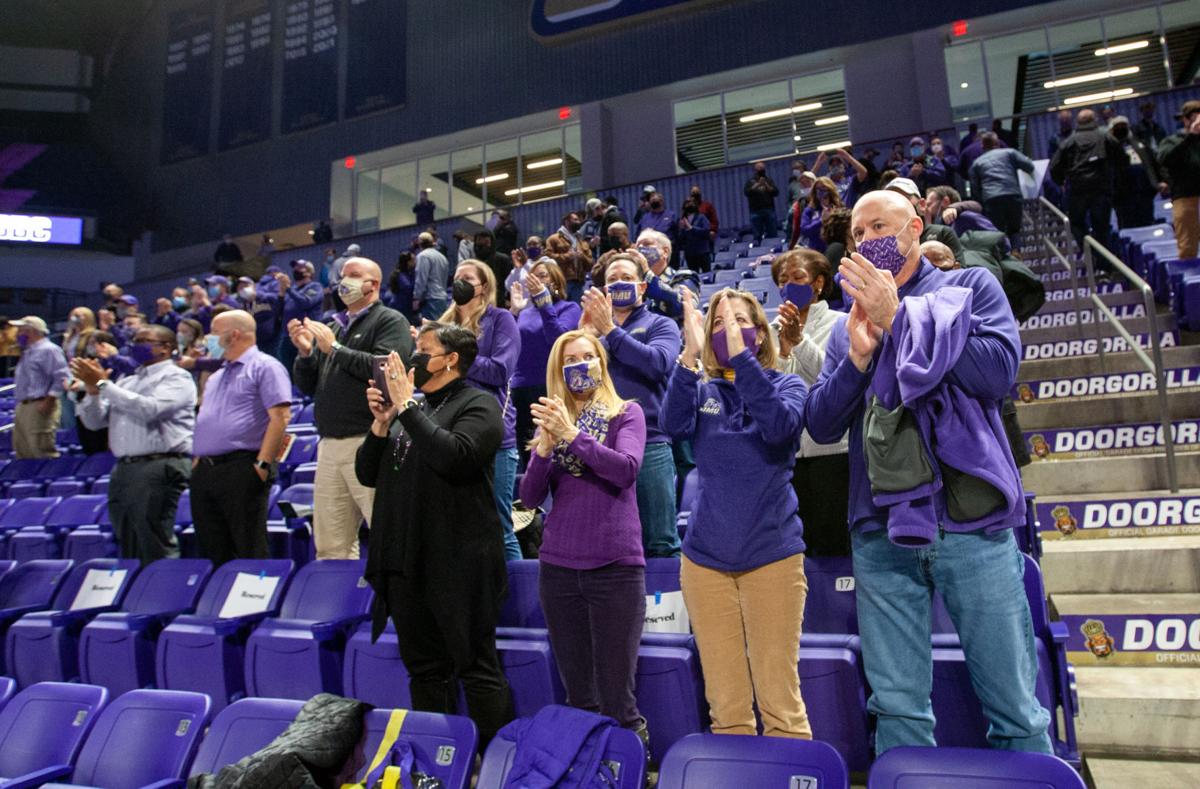 James Madison University fans and supporters applaud during a press conference held in the Atlantic Union Bank Center announcing the school's move to the Sun Belt. 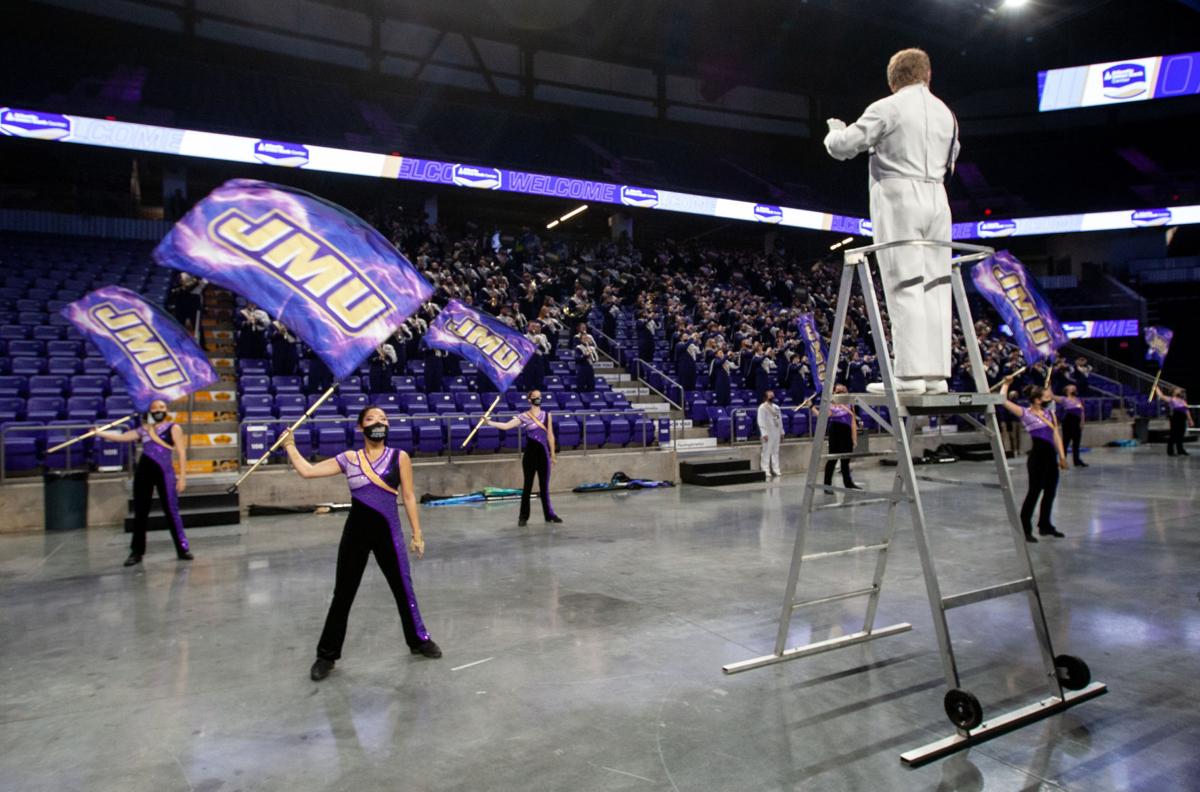 The James Madison University Marching Royal Dukes perform before a press conference announcing the school's move to the Sun Belt.

James Madison University cheerleaders rally on the crowd during a press conference at the Atlantic Union Bank Center formally announcing the school's acceptance to the Sun Belt.

James Madison University fans and supporters applaud during a press conference held in the Atlantic Union Bank Center announcing the school's move to the Sun Belt.

The James Madison University Marching Royal Dukes perform before a press conference announcing the school's move to the Sun Belt.

The Saturday morning press conference at James Madison’s Atlantic Union Bank Center, called to celebrate the Dukes’ acceptance into the Sun Belt Conference, for the most part went off exactly as meticulously planned.

The lone exception was when JMU athletic director Jeff Bourne began to laud the Sun Belt’s partnership with ESPN. At that point fans couldn’t hold back their applause long enough to let Bourne finish his sentence.

If anything highlighted James Madison’s growing discontent with the Colonial Athletic Association, where JMU was a charter member, it was the conference’s media rights deal with streaming provider FloSports, initially signed in 2019.

The Dukes were the lone CAA school to vote against the deal, one universally despised by fans of every league school. And yet, when the CAA needed a liaison with Flo’s Austin, Texas, office it was a JMU employee tasked with the job.

That’s because the Dukes’ existing lucrative streaming platform, MadiZone, served as the ideal model for future CAA broadcasts. That MadiZone provided a better viewing experience for fans and more lucrative payday for the JMU mattered not. From the Dukes’ point of view, it was just one of many times they stepped up to help the conference.

As a Sun Belt member, a move that became official this weekend, JMU games will be available on ESPN+ — a streaming service that provides more content at a fraction of the price of FloSports — as well as some games on ESPN’s linear channels.

The ESPN partnership will also likely pay Sun Belt schools close to $2 million annually based on the projections JMU officials shared with a Virginia General Assembly commission on Friday, among the largest paydays for any programs outside the Power 5 conferences.

“If it seems like I’m talking a lot about revenue, I am,” Bourne told the audience Saturday. “Because it’s important.”

Revenue was also a touchy subject in the CAA. JMU was making money and reaching a larger audience streaming games on their own. That wasn’t the case for the rest of the league.

The Dukes’ $58 million athletic budget dwarfs the rest of the Colonial. Sources from other league schools suggested JMU too often tried to flex that fiscal muscle. Many folks at JMU will say that most major league votes were designed to limit JMU’s advantage, even sometimes to the detriment of the league as a whole.

Which gets to the heart of the FloSports kerfuffle. Bourne eventually stopped keeping his displeasure of the CAA decision private. Last March, JMU was less than satisfied with the league response after two controversial technical fouls led to an early exit in the men’s basketball tournament. Later, the CAA voted to award the 2020 spring football championship solely to Delaware, despite the fact JMU also had an unbeaten record.

The Dukes later petitioned for, and were awarded, a shared championship, though no mention of a JMU football title in 2020 exists on the CAA website. Just last week, the CAA presidents voted to exclude JMU sports from league championship contention for the rest of the school year, despite overwhelming public opinion that JMU’s athletes should not be punished for an administrative decision.

But JMU attempted to make Saturday’s events — the press conference fell on homecoming and the day of home football, volleyball and soccer contests — less about CAA animosity and more about the move forward.

But even as JMU President Jonathan Alger introduced Sun Belt commissioner Keith Gill, who highlighted a 30-year friendship with Bourne, he couldn’t help but get a little dig in at the CAA’s expense.

“We’ve been inspired by your support of student-athlete well-being and collegiality,” Alger said to Gill.

In this age of college sports, relationships are constantly developing and falling apart. If this is a messy divorce between JMU and the CAA, the Dukes and Sun Belt are still in the puppy love phase.

“I woke up, and I go for a walk every morning,” Gill, who was athletic director at Richmond when the Spiders visited JMU for ESPN’s College Gameday broadcast in 2015, said. “It was so good to be on this campus. Such an absolutely beautiful campus. I’m so excited to be back. This process is always a challenge, but one of the things that made this easy was my relationship with Jeff Bourne.”

As the event ended, the arena sound system blasted The Beatles’ “Here Comes The Sun.” The sun-related puns may get tiresome quick, but at this point it truly does seem the Dukes are moving out of the storm.

Good to be rid of the CAA. Since the CAA will not permit JMU to participate for championships, its time to remove the CAA logo off of all courts, fields, and uniforms. Also, time to run it up on CAA opponents to better chances of at large bids.