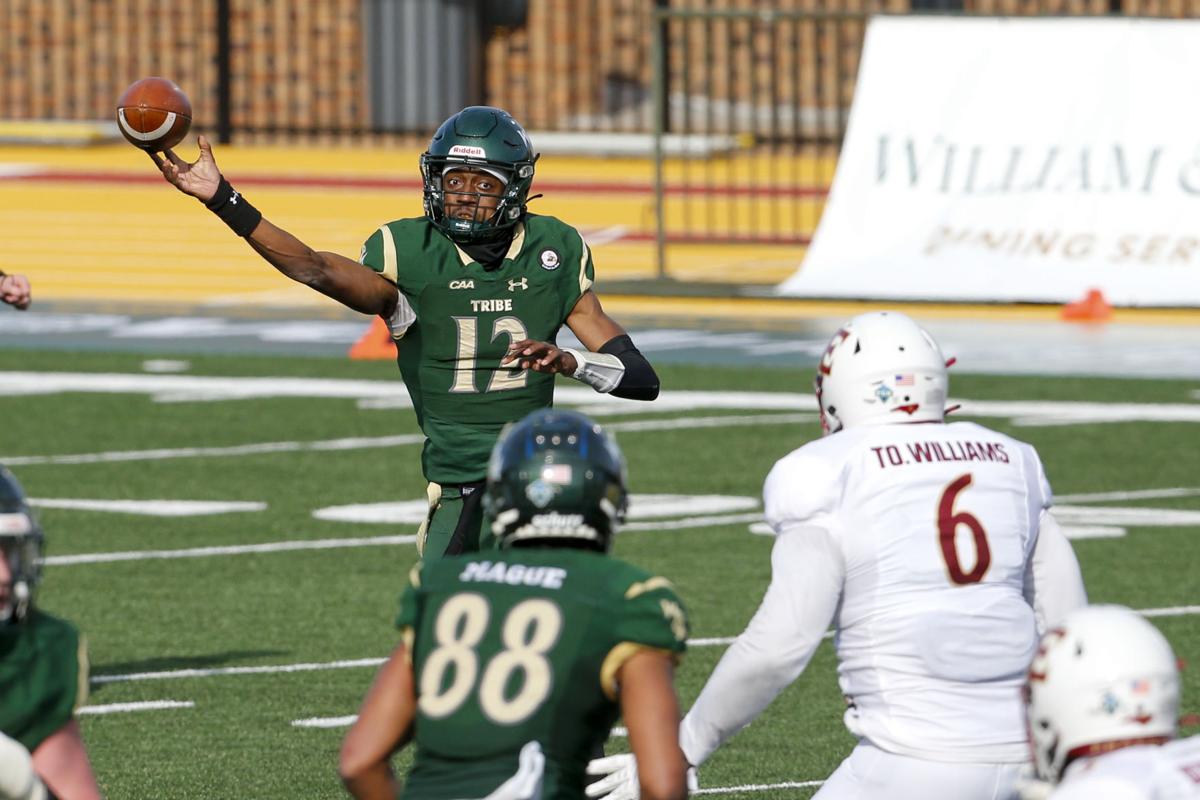 William & Mary quarterback Hollis Mathis throws during the Tribe’s win over Elon this past Saturday in Williamsburg. William & Mary quarterback Hollis Mathis carries the ball during the Tribe’s win over Elon this past Saturday in Williamsburg. 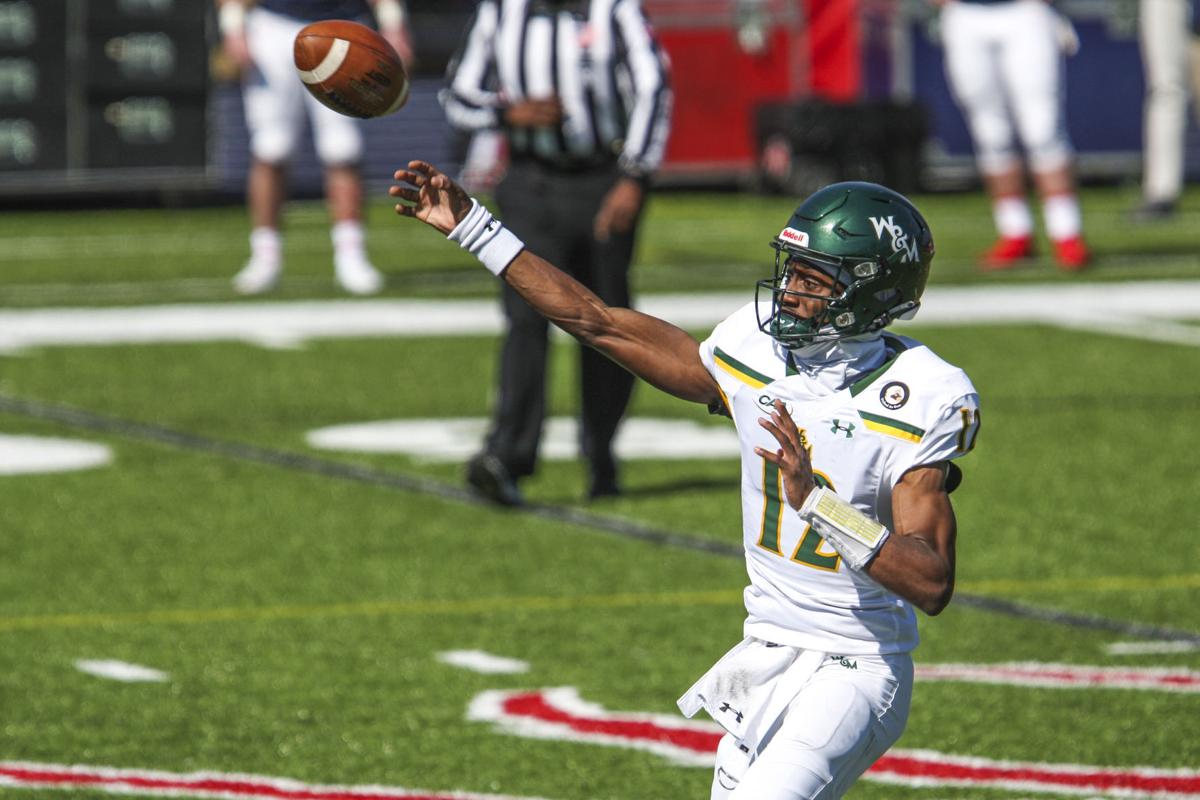 William & Mary quarterback Hollis Mathis throws during the Tribe’s win over Elon this past Saturday in Williamsburg.

William & Mary quarterback Hollis Mathis carries the ball during the Tribe’s win over Elon this past Saturday in Williamsburg.

“I’m kind of a head-down, drive-the-sled-kind-of guy,” said Mathis, whose Tribe are slated to host No. 1 James Madison on Saturday in Williamsburg.

“One of the things I wanted to make sure to do during the extended 2020 offseason was become 100 percent more consistent with my mechanics,” he said, “and become a lot more comfortable, so I can do whatever the coaches ask me to do, whether it’s to run or to pass.”

His debut season in the fall of 2019 was successful. The former Penn Hills (Pittsburgh, Pa.) High School standout became the first true freshman quarterback in William & Mary history to start a season opener for the Tribe, who began playing intercollegiate football games all the way back in 1894.

He threw for 976 yards and four touchdowns and rushed for 546 yards and eight scores during the campaign. But this spring, he’s become more efficient.

Mathis is completing 61 percent of his throws, which is up from his 45-percent completion clip as a freshman. Through two games, he’s tossed for 379 yards and two touchdowns while adding 92 yards and a score on the ground.

“You see the maturation of a quarterback and an individual who is getting better,” William & Mary coach Mike London told reporters via Zoom following the Tribe’s 31-10 win over Elon this past Saturday.

Mathis said his accuracy is improved, in part, because throughout the days and months between last March and this past fall when players were dispersed from campus because of the coronavirus, he made the effort to throw wherever and with whomever would catch passes from him.

He would call or text former high school teammates and other college players from the Pittsburgh area who were stuck at home during the early months of the pandemic, he said, to find his cast of receivers. He said his regular targets were Akron wide receiver Tony Grimes, Miami (Ohio) defensive back Jeremiah Josephs and Syracuse wide receiver Courtney Jackson.

They’d gather at local high school fields. Those pass-catchers would run routes and he would zip the ball to them.

He said he also took a trip to Colorado for lessons with private quarterback instructor Tim Jenkins.

“I took the things I learned there and tried to apply them all summer, when I had a lot of guys catching [passes],” Mathis said. “I had my brother come out and catch, and then sometimes I would run drills and throw it against the field goal post on an empty field. Whatever way I could get some work in, I was looking to get that done.”

The decision to diligently concentrate on ways to up his game, he said, has helped him excel even through William & Mary’s offensive coordinator change.

Ex-Tribe offensive coordinator Brennan Marion departed following Mathis’ freshman season to take the same job at Hawaii and has since stepped into the offensive coordinator role at Pittsburgh. William & Mary replaced Marion with Christian Taylor, an ex-San Diego assistant and a former Tribe quarterback himself.

JMU coach Curt Cignetti said the Dukes’ defense will be challenged against Taylor’s offense and Mathis running it behind center.

“He is extremely accurate,” Cignetti said about Mathis. “He’s really a threat and he drops deeper than you’re used to seeing. He’ll be 12 yards deep on drop backs, naked bootlegs and stuff like that, which buys him more time to see the field and also create some space between him and the rush when he does have to make guys miss.”

Said Mathis: “One of the things that Coach Taylor preaches is being meticulous and detailed in everything that we do. That’s one thing that’s a little bit different than what we did with the hurry-up [offense] we ran last season. This year, it’s more about trying to make sure we’re in the right spot at all times and that each play we’re running is the best we can come up with. And I just play my part, so whatever the OC needs from me is going to be exactly what I’m going to do.”

Mathis didn’t play against JMU when the two teams last met on Oct. 19, 2019, because of an injury, but Cignetti and his staff have seen enough of the quarterback on film to understand the danger he poses both in the passing game and in the running game.

“Sometimes we get enthralled with our sack numbers,” Cignetti said, “but with this guy, you’ve got to cage him in. We’ve got to have great eye discipline, too, when we’re trying to tackle him. You can’t go for a pump fake or something like that. Your eyes need to be in his lower or mid-section, but he’s still going to be a real challenge to tackle in the open field because of his change of direction, his speed and suddenness. Some guys are really fast, but don’t have great change of direction or it takes them time to accelerate, but this guy can cut on a dime.”

The 6-foot-2, 170-pound Mathis said he added some muscle in the offseason, too, in order to handle the physical aspect of the college game better than he did as a freshman.

He was one of London’s first recruits to William & Mary after London left Howard for the job with the Tribe. Mathis said he was initially offered by London at Howard, and then again at William & Mary.

Mathis said he already trusted London at the time and then, “ended up falling in love with the campus, program, history of the program and people who went to William & Mary. It was a perfect match.”