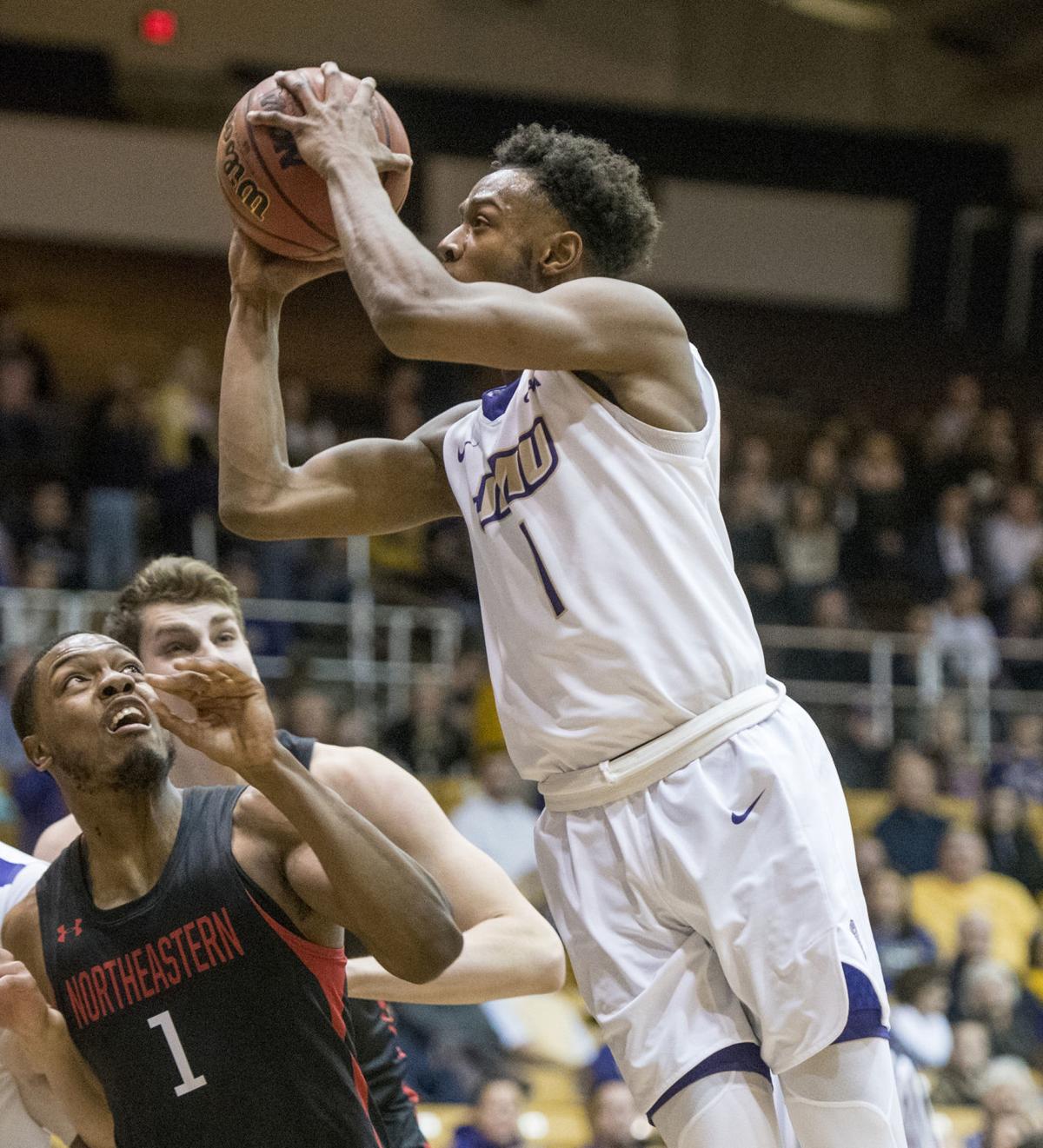 James Madison rising junior Matt Lewis has as high of a ceiling as any player in the Colonial Athletic Association. 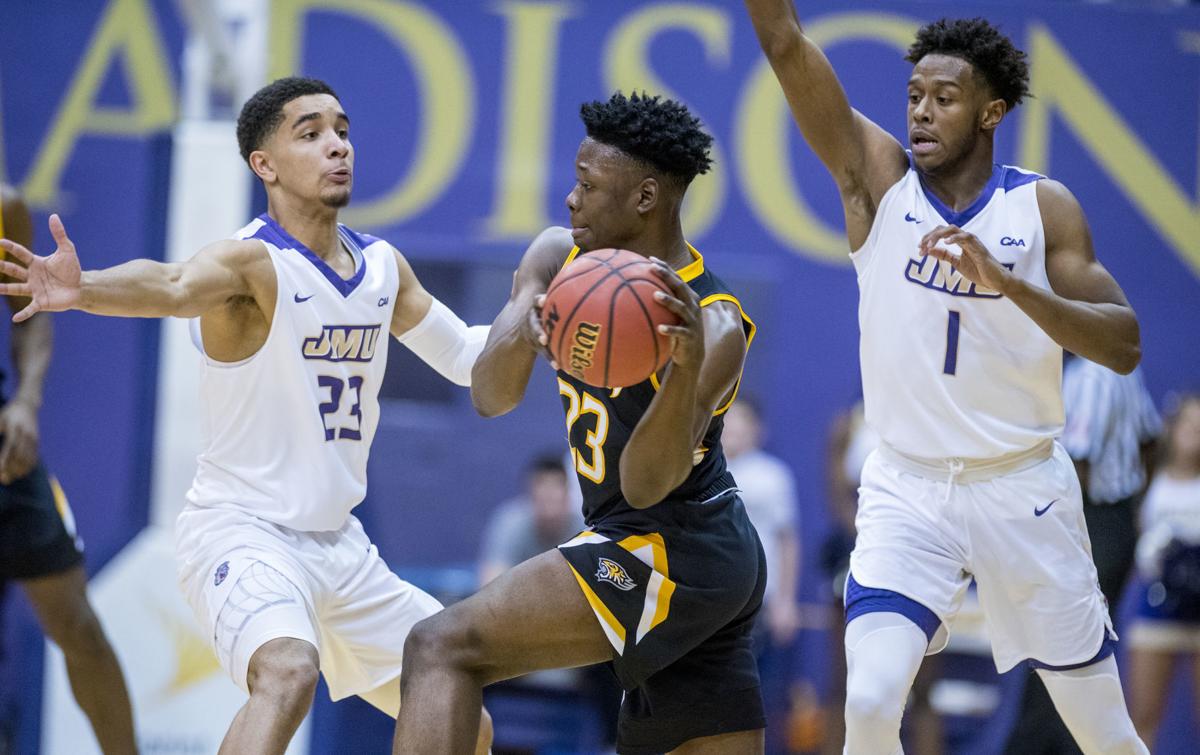 Towson guard Brian Fobbs, center, looks for an open teammate around James Madison guards Deshon Parker, left, and Matt Lewis. Fobbs shot 37 percent from 3-point range in his CAA debut season, and if he can improve on that mark just a little bit he could be the kind of “3-and-D” player the Association has grown extremely fond of.

James Madison rising junior Matt Lewis has as high of a ceiling as any player in the Colonial Athletic Association.

Towson guard Brian Fobbs, center, looks for an open teammate around James Madison guards Deshon Parker, left, and Matt Lewis. Fobbs shot 37 percent from 3-point range in his CAA debut season, and if he can improve on that mark just a little bit he could be the kind of “3-and-D” player the Association has grown extremely fond of.

HARRISONBURG — The 2019 NBA Draft proved a big one for the Colonial Athletic Association.

The CAA had its first player drafted since 2015 when College of Charleston’s Jarrell Brantley was taken in the second round as the 50th overall pick.

Three picks later, Hofstra’s Justin Wright-Foreman, the two-time CAA Player of the Year, gave the conference two players in the same draft for the first time since 1992 as both players wound up with the Utah Jazz. Additionally, UNC Wilmington’s Devontae Cacok signed a free-agent deal with the Los Angeles Lakers to play with their summer league team.

Sending players to the NBA can only help the once-proud CAA, which in recent years has had something of a crisis with its most prominent sport falling behind several mid-major peers in terms of metric rankings, exposure and NCAA Tournament berths.

The conference was senior-dominated in 2018-19, but boasts a handful of players who could reasonably have NBA aspirations in the next couple of years. Here’s a look at the returning CAA players most likely to hear their name called during a future NBA Draft:

The 6-10, 235-pound center entered the draft following his junior season, but decided to return to the Tribe after getting feedback from his workouts for NBA teams. Knight may be a front runner for CAA Player of the Year as a senior after averaging 21 points, 8.6 rebounds, 3.5 assists and 2.3 blocks per game last season.

Given the Syracuse, N.Y., native can do a little bit of everything with great size, it stands to reason he’s returned to college to work on his outside shooting. It’s not that Knight can’t shoot the 3-pointer, but he’s a career 61-percent shooter from inside the arc and hit just 24 percent from deep last season. If he can get that number up, combined with his shot-blocking ability, he could become an ideal rotation player in today’s NBA.

Riller could make it the rare CAA feat of having players drafted in back-to-back years for the Cougars. The Orlando, Fla., native is arguably the best pure scorer in the conference after putting up 22 points per game last season. He’s also a solid distributor, dishing out 4.1 assists a night.

Charleston will have a solid roster returning, but without Brantley it may the first time for Riller to really be able to dominate the ball. At 6-3, 190, he’s got solid size for a point guard and shoots a respectable 33 percent from 3-point range. After former Wichita State guard Fred Van Vleet became the talk of the NBA Playoffs helping the Toronto Raptors to the title, perhaps the value of another hard-nosed mid-major guard increases.

Another guy who has been a really good CAA player for three seasons, but will get an opportunity to truly make the team his own next season with Wright-Foreman stepping aside to pursue a pro career. The biggest question might be how efficient Pemberton can be without Wright-Foreman in the backcourt alongside him.

He averaged 15 points to go along with 4.8 rebounds and 2.3 assists as a junior, but his 3-point shooting slipped to 35 percent after hitting better than 40 percent his first two seasons with the Pride. Can his percentage rebound as he’s free to take as many shots as he wants? One thing NBA scouts will surely like is his 6-5, 195-pound frame, which gives him good size for a point guard.

It might not be a stretch to say Lewis has as high a ceiling as any player in the conference, but heading into his junior season he needs to develop a little more consistency to truly make his mark. That said, he was still able to average 16.4 points per game as a sophomore despite a prolonged shooting slump to start the season.

But when he’s on, and he seems to often be on during crunch time, he’s as dynamic a scorer as there is in the CAA. That was on display during a 40-point performance going toe-to-toe with Wright-Foreman at Hofstra. His durability — Lewis played injury free despite being second in the league at 36.5 minutes per game — and ability to distribute the ball as a 6-5 combo guard could also prove appealing to pro scouts.

The former JUCO All-American made his mark in his junior season at Towson, averaging 17.5 points and six rebounds. At 6-4, 215 pounds, Fobbs often plays with the strength of a much larger player and is nearly unstoppable going to the basket with a head of steam.

He shot 37 percent from 3-point range in his CAA debut season, and if he can improve on that mark just a little bit he could be the kind of “3-and-D” player the Association has grown extremely fond of.

Like Lewis, Allen is entering his junior season and has more than one season left to improve his stock, if he chooses. The 6-2, 200-pound guard actually beat out Lewis for CAA Rookie of the Year honors two seasons ago, but dealt with some injuries as a sophomore.

Still, the talent is certainly there after averaging 16 points and shooting 38 percent as a sophomore. If he can stay healthy and make the jump into an all-conference player more people will likely take notice.

The former George Washington player will be a fifth-year senior with the Huskies next season and while he was overshadowed a bit in his own backcourt by former Northeastern guard Vasa Pusica, he boasts some qualities NBA teams love.

Just 6-1, Roland is athletic and a good defender for his size, recording 40 steals as a redshirt junior. He also set a Northeastern record with 99 3-pointers last season, hitting more than 40 percent of his attempts. Part of the reason for his success shooting the ball is a knack for using screens to get open, an underrated trait that should serve him well as he becomes a bigger focus of the Huskies offense in 2019-20.