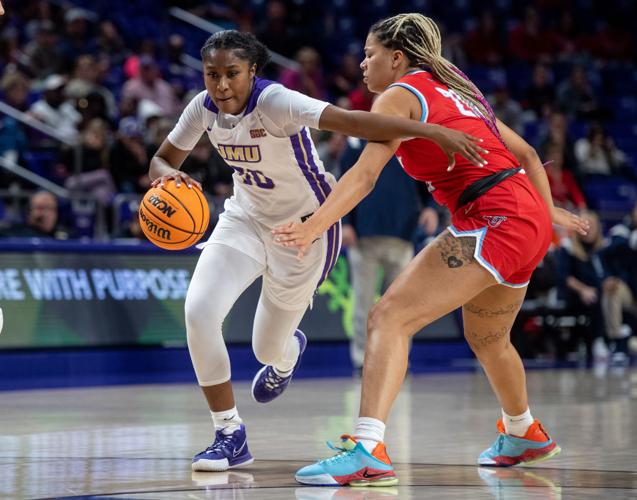 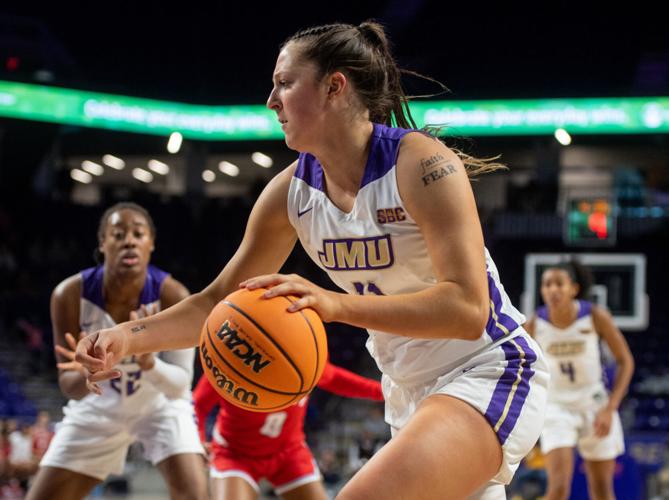 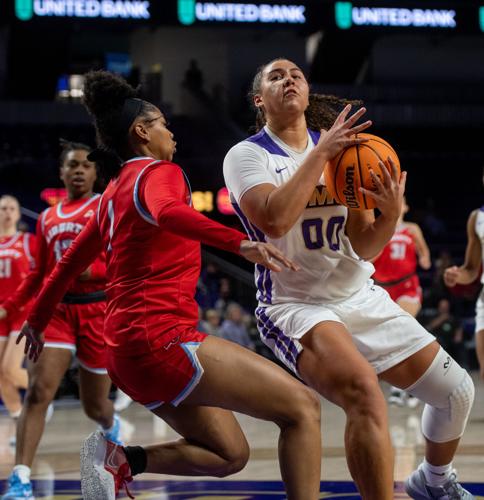 James Madison guard Kiki Jefferson had 11 rebounds before she made her first field goal attempt Wednesday afternoon against Liberty, but she was almost perfect from the free throw line.

And in what turned out to be a fitting end, Jefferson nailed all six of her free throws in the final minute to help the Dukes down Liberty 67-63 in non-conference women’s basketball action at the Atlantic Union Bank Center.

“We all have faith in her that she’s making free throws,” guard Peyton McDaniel said. “We know she’s going to knock them down. So when it’s crunch time, we know she’s got our back and we’ve got her back too.”

Jefferson, who dropped 30 points in the Dukes’ previous game against No. 13 North Carolina, struggled from the field, missing her first five attempts. But as her uncharacteristic shooting woes showed against the Flames, she found ways to get to the free throw line.

The Lancaster, Pa., native finished with 20 points on just 2-of-9 shooting from the field, but was 16-of-17 from the free throw line. Jefferson also logged 12 rebounds and two assists, marking her third double-double of the season.

“Honestly just giving me confidence and understanding that if I'm not scoring, I know my teammates got me,” Jefferson said. “Just knowing that I’m going to find a way to always help my team in some way and today was rebounding.”

JMU head coach Sean O’Regan was happy to see Jefferson affect the game in other ways when her shots weren’t falling from the field.

“She found a way,” O’Regan said. “That’s superstar status. You get 20 and 12 with making two field goals, that’s incredible to me. I’m glad she’s figured out other ways to do it. … She’s done a really good job with that.”

But the uncharacteristic shooting day wasn’t just limited to Jefferson as both teams struggled to find a rhythm in the first quarter.

The teams started a combined 1-of-24 from the field and the made basket was a layup by Liberty’s Mya Berkman. Forward Kseniia Kozlova opened the scoring from the free throw line for the Dukes, making both of her attempts.

“We were getting good looks and good shots that we wanted, they just weren’t going in initially,” McDaniel said.

JMU’s first field goal came almost eight minutes into the contest as McDaniel drove to the basket, converted her layup attempt and drew a foul in the process.

In the second quarter, both teams started to find a rhythm.

It was sparked by Jefferson, who assisted on two straight baskets to help the Dukes build a six-point lead. Neff also converted on two of her three 3-point attempts in the first half, which were the only pair of triples knocked down between either team in the first 20 minutes.

And after halftime, Neff’s 3-point stroke just got hotter and hotter.

The Bel Air, Md., native knocked down two triples in the third quarter, including one to snap a 6-0 Liberty run as the Flames tied the game at 32 a piece.

Neff finished with 14 points, with four made 3-pointers, and seven rebounds. O’Regan pointed to Neff as the key to the Dukes’ win.

“Kiki playing Kiki, I think you could still lose the game,” O’Regan said. “I think Claire was the X-factor. … In the end, Claire’s presence was really the X-factor.”

And Jefferson was fired up to see Neff light it up from deep.

“That’s Claire Neff,” Jefferson said. “I’ve seen her in AAU, that’s just what Claire does. If it’s not scoring, it’s her energy 24/7. What y’all seen today, she’s got more. She’s got more and you’re going to see it.”

That 3-point prowess wasn’t contained to just Neff, as McDaniel knocked down a pair of triples in the third after missing her first two attempts.

McDaniel finished with 11 points and nine rebounds on 50 percent shooting from the field.

JMU held onto the lead down the stretch after Liberty used a 7-0 run late in the fourth quarter to cut the Dukes’ advantage to one.

The Dukes are off for Thanksgiving, allowing the players to go home to celebrate the holiday with their families. And the players’ excitement was palpable postgame.

“We ended on a high note before the break,” McDaniel said. “Enjoy Thanksgiving dinner and then come back.”